Jeremy and I have been to a few concerts together, notably a few Tragically Hip shows and John Fogerty’s “1969”. So, to a degree, I’m lucky that he pings me to go to shows with him.

I was a bit unsure how to accept the one for Heart and Styx, however. As a child of the 1970s and 80s, I was fairly familiar with both bands, being regulars on the (what we now refer to as) classic rock stations. That, and Canada, apparently, had a big thing for Mr. Roboto, the only hit from Styx’s concept Kilroy Was Here album. I liked it mostly because of the robot sound at the beginning, not knowing that the whole album was meant to be an opera, like The Who’s Tommy, until I was much older.

Heart I knew mostly because my cousin Erica loved them. And, frankly, Barracuda is just one of those great rock tunes.

Still, I wasn’t sure. Would I like them both enough for 2.5 hour concert? After a bit of thought, it seemed more of a “why the hell not”, and away we went.

We met up at Scuba Jay’s Bar, which had previously been the Metropolitan, one of the better places in town to get a good beer. The Metropolitan had failed for more than a few reasons, but the location in Kensington is hard to beat, so it’s of little surprise that something else took over. A couple of beers later, and we were off to the Jube.

The last time I was at the Southern Alberta Jubilee Auditorium was to see Dr. Jane Goodall with Choo Choo a couple of months ago. We had to mask for that event, mostly for Jane’s benefit (when you’re 88 years old and just starting out touring again after a pandemic, you take your health seriously). No masks were required for tonight, however, though we did see a few.

What we also saw a few of were people who were quite a lot younger than I expected to see. Most of these bands fans are older than me (I crossed the magic half-century back in July), but I was surprised to see so many people easily half my age. I guess it shows what good music can do.

It also helps when you’re in the 13th row. (Thanks again, Jeremy!)

First up was Heart. Or, more specifically, “Nancy Wilson’s Heart” (as she put it), as she’s touring without her sister (and founding Heart member) Ann, due to an altercation a few years ago that seems to have permanently strained their relationship. 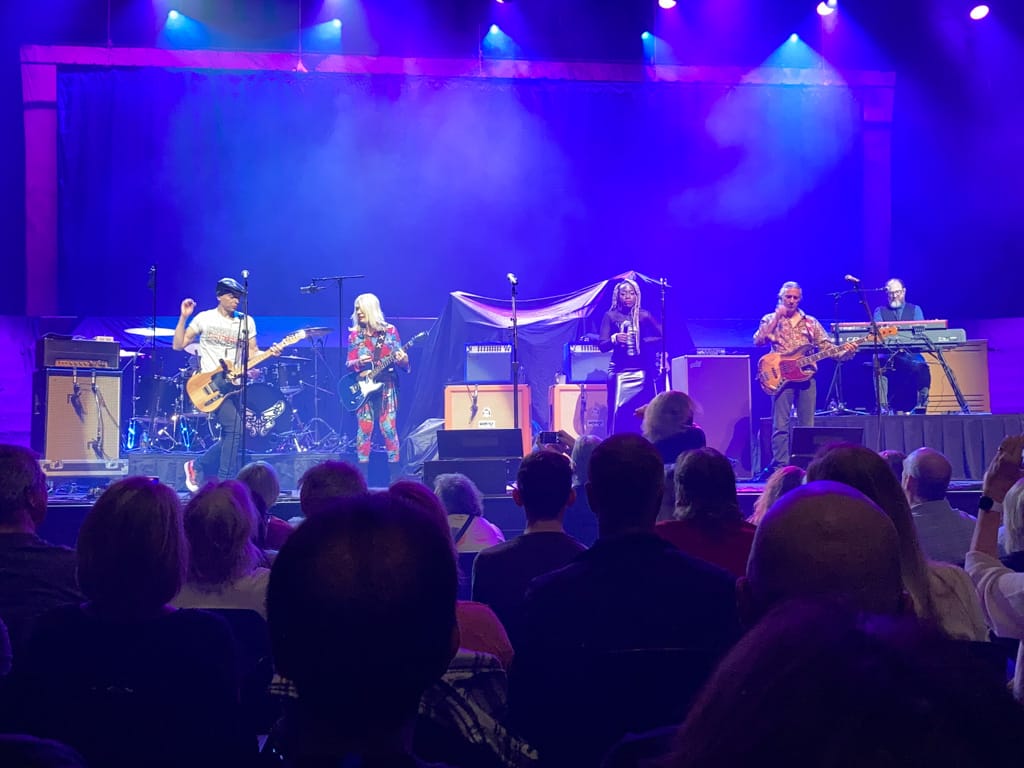 But still, a great show. Barracuda, of course, but also Crazy On You, Heartless, What About Love, These Dreams, and a few others that I could recognize but couldn’t exactly pin down. And they even threw in a Paul McCartney classic Band On The Run, finishing with a decent cover of Led Zeppelin’s Rock and Roll.

The break in between was mostly to remove Heart’s equipment and uncover Styx’s materials, including their stage. Styx is, at heart (pun totally intended), a performance band. Yes, they do studio really well, but when you have a stage, you use as much of it as you can.

Styx has one and a half of it’s founding members, and four of the six and a half members have been around since the close of the last millennium, which is a pretty impressive feat (the half member still plays with the band, but not entire shows due to health).

But for me, the single best part is Lawrence Gowan. 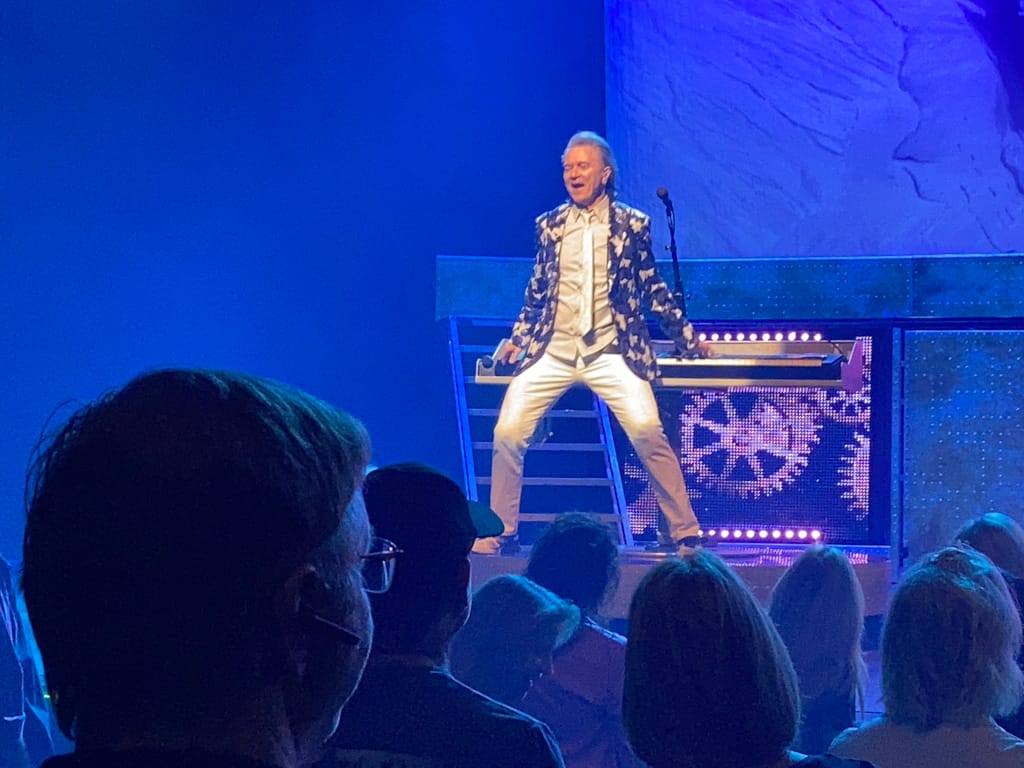 Gowan was a Canadian pop icon in the mid-1980s and into the 1990s, putting out one of my all-time favourite songs: A Criminal Mind.

Now, Heart was loud. I mean, it’s a rock concert, one would have to expect that, right? But Styx? I could feel my clothing vibrating from the bass. It was the first time in a very, very long while that I had experienced a true “wall of sound”.

The first song up I didn’t recognize at all. Nor the second one. The third one, maybe? I’m not sure. I was starting to wonder if I knew any Styx songs at all. And the mysteries just kept coming. Every now and then, I think I’d recognize something but I wasn’t really sure.

After a bit, I stopped caring. Because, and I know this is going to sound odd, but this is one hell of a band to just watch. I was on my feet the entire time they were on stage, cheering and periodically getting a few words out (when I recognized a chorus). 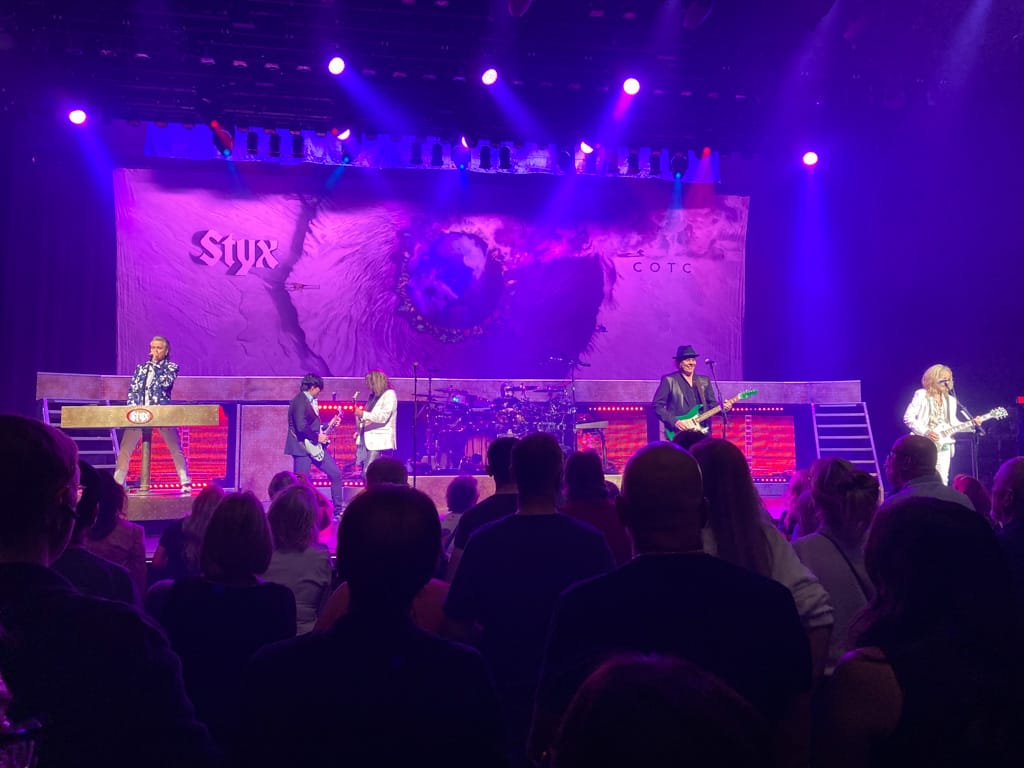 In particular, I enjoyed watching Lawrence Gowan. I had never seen him live before – music videos and the odd television special, never in-person – and for a guy who is 66, he has an amazing amount of energy and does not shy away from dancing around on stage, running onto the upper risers, and more importantly, whizzing around on his keyboard that could spin 360 degrees – something he played literally with his hands behind his back while smiling at the audience.

Jeremy was enthralled with the drummer, Todd Sucherman. Jeremy’s a drummer, has been in a (moderately successful) rock band, himself. Sucherman has a big kit. It’s not quite as extreme as ones like Rush’s Neil Peart, but it’s definitely no slouch, and there was more than enough time for him to solo and prove that he can make difficult look easy.

And then I heard the opening chords to A Criminal Mind. I might have lost my composure more than a wee bit. Although he cut a verse out (it is a 7:21 song on the album), it was still amazing to see and hear live.

Interestingly, I knew more of the songs the longer the concert went on, including Too Much Time On My Hands, Turn It On Again, and Come Sail Away (which Cartman blared in my head).

But the encore, for me, was the cream on the cake: Mr. Roboto. I’m pretty sure that I made myself hoarse just from that song alone, along with a sizeable part of the audience.

Walking away, I remarked at how amazing the show was, despite not being a real fan of either band. Which really threw in contrast for me the need to see more live music and not care as much about how well I might know a catalogue.

Can’t wait for the next show…