A number of weeks ago, Venture's CEO, Arlene Dickinson, announced that staff could work from anywhere they liked this summer, to take advantage of our new-found COVID freedoms. By and large it wasn't a big change -- we'd been working mostly remotely since before I started with the company in October -- but having a formal blessing certainly came in handy.

With the announcement, Alex immediately suggested we follow one of the things we'd been wanting to do for a while, and have a week somewhere in the BC Interior, possibly with houseboat or with a cabin by the water. As it happens, finding a cabin by the water is a lot more difficult than one might think, especially with a reasonable price (there's lots with unreasonable prices); a houseboat would only work if I didn't.

Thus Alex spied a new-on-the-market AirBnb location in Lake Country. Which until then, I'd never heard of ... at least in Canada. Lake Country for me was the Lake District in England, a place I've always been curious to visit, but thusly have only ever travelled through by train to Scotland. Lake Country is a municipal district in BC that's wedged between Vernon and Kelowna, covering a number of lakes in the area (hence the name). The B&B looked nice, so we opted to give it a go.

The drive out was a bit of a challenge. Technically, for me, it was a work day. So I got to work from the backseat as we drove out to Banff. Originally, we were going to try to get Lake Louise, but between a later departure and too many scheduled meetings, we had to make our stop in Banff so I could attend two back-to-back conference calls without fear of losing service (all these years, and no-one has yet provided decent coverage along the Trans Canada Highway, there are still massive gaps in service all over the place).

It felt a bit odd having a client call in the backseat of the car, windows down, sitting in a parking lot next to the Banff Firehall. But the meetings were effective and ended just in time for the family to announce that we needed a patio lunch, which I was all for. 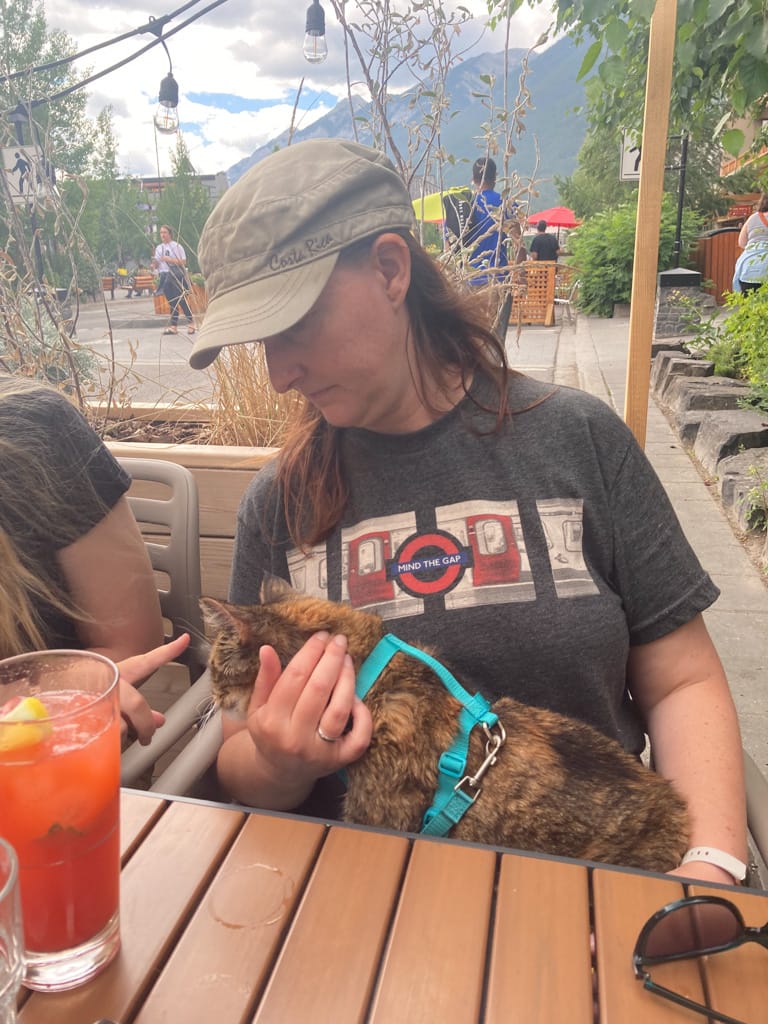 After lunch, I plugged away at emails and text messages (mostly from my phone, as the laptop battery had run out) until I'd run out of things to do. I sat in the backseat until we got to Revelstoke. I drove the rest of the way to the B&B.

Asia came with us. Unlike our previous jaunts, we opted to take our cat on a rare adventure. The car ride she wasn't too keen with at first, as every other time she gets in the car, it's to see the vet. But she soon settled and remained fairly calm for the rest of the ride.

The B&B itself is a basement suite of a relatively new house in Oyama, one of the townsites in Lake Country. Oyama, weirdly, is named for a Japanese Army Field Marshal. Although I could not pin the exact reason why, the locals believe it was likely due to all the Japanese immigrant farmers who lived in the area near the turn of the previous century.

Oyama is on an isthmus forming a barrier between Kalamalka Lake (to the north) and Wood Lake (to the south). Today, Oyama lives on in name by road names, and the name of the General Store. Locals still use "Oyama" instead of "Lake Country". It's welcoming, small, and feels homey.

And really hot. It's been at least 37C since we got here.

My days are fairly straight-forward: get up at 07:00, have breakfast, get my computer set up on the patio, start work at 08:00 (09:00 in Calgary), work until it's too hot (which is around 14:30, when the sun finally creeps around to our west-facing covered patio), then retreat inside to finish off the day. So far the only noise problem I've had is when I had to run an interview on Tuesday when a helicopter decided to take off nearby and nearly drowned me out.

After work, I've tried to get out for a bike ride. The isthmus also once used to be how the Okanagan Valley Railroad crossed from the west side of Kalamalka Lake to the east side of Wood lake as it headed from Vernon to Kelowa 30 kms to the south. The railroad was not long for this world, however, as the tracks were too curvy, there were too many rockfalls, and the invasion of trucks dramatically reduced the railroad's monopoly on shipping. The trains last ran around 2007, the tracks pulled around 2015. Today, they're a wonderful bike route, and the route around Wood Lake (rail trail on the north and east, road on the south, paved path on the west) is about as fantastic am 18 km ride as I've ever had.

Alex and the girls have been busy going on a bike ride (just one, so far), to Oyama Lake for kayaking and paddle boarding, and they're ziplining today.

I am working. Everyone who sees my background is awed and jealous and it must be so nice to be in the Okanagan! Except that's what everyone else sees -- I see my monitor. I see my work. Yes, it's nice to see when I stand up to get another glass of water (did I mention it's hot?) or to pee (because, water). My only pleasures have been a couple of bike rides ... and a trip to Wood Lake for a swim. 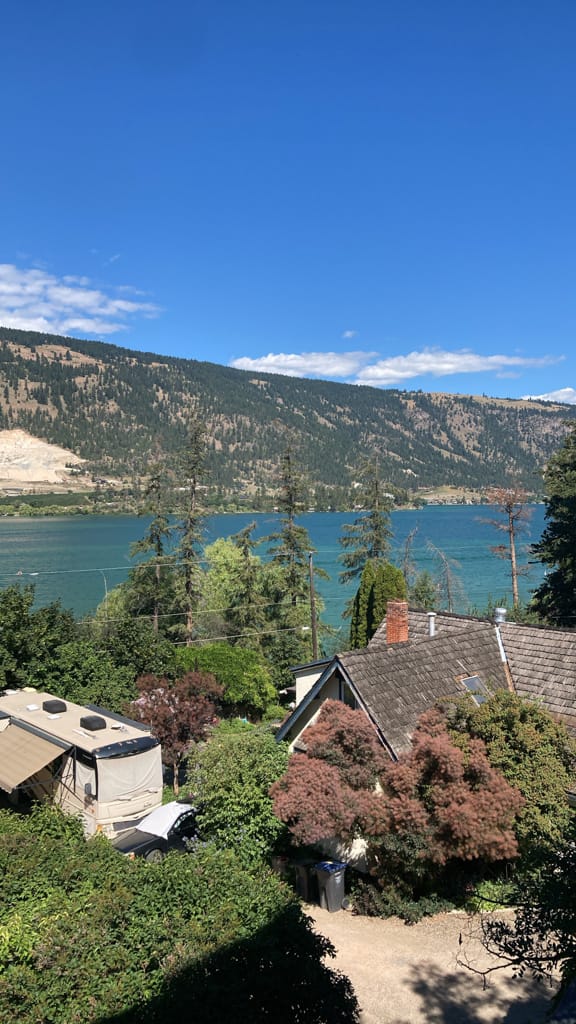 I have a love/hate relationship with lakes. I love to swim in them, but they tend to be bloody cold. In Alberta, our lakes tend to be fed by glacial run off, making swimming a challenge. And although BC should have something similar, there's no more glaciers in the Okanagan area, so these lakes tend to be much warmer. Lake Kalamalka, in particular, is quite warm. But only Monkey would swim with me, neither Alex nor Choo Choo were interested, instead reading on the stony beach. 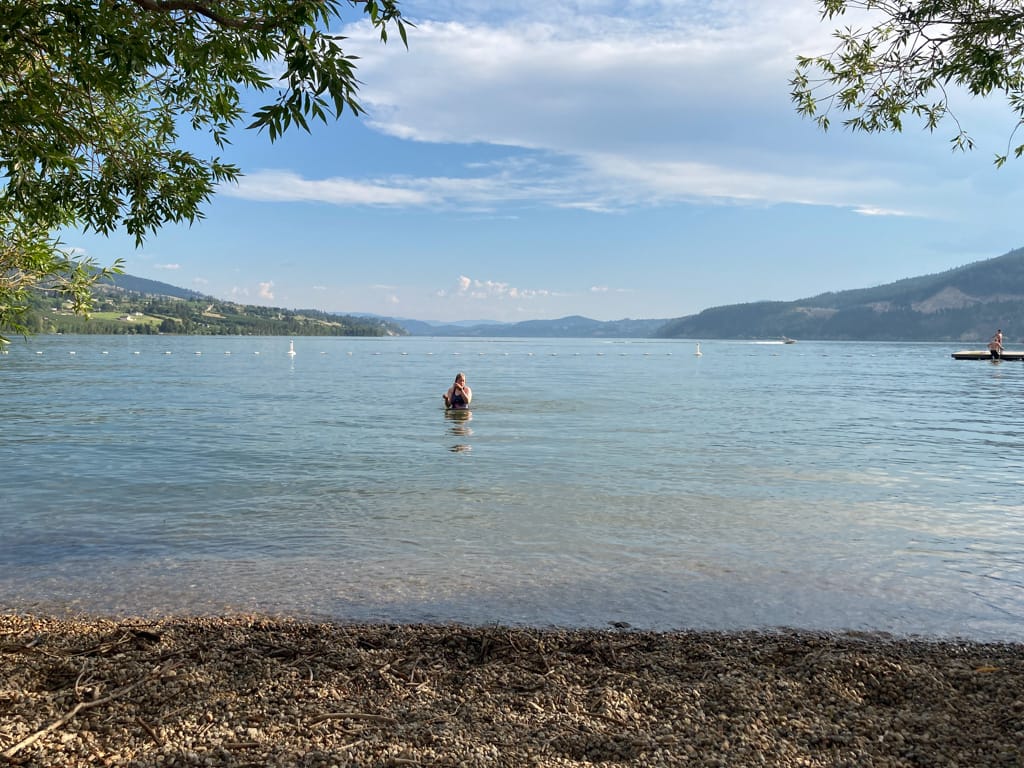 We're here until Monday, when we head back to Calgary. Tomorrow, I'm hoping I can see ex-CP 3716 on the Kettle Valley Railway. Although I rode it last year, we were plagued with thick forest fire smoke, which make the experience a bit ... washed out. The clarity of the skies here this week has been astounding, so I'm hoping to get some great pictures.

At least I get the weekend. That's at least something, right?