We're back in Ruskin. And it took way longer to get here than I could have imagined this morning.

We were the first ones away, having the car effectively packed by 09:00. I had no illusions for the trip ahead: there would be geocaching and unlike the way out, there would be no rush.

Surprisingly, the trip to Port Alberni went far faster than I expected. Though this was partially due to catching the tail end of the line at Kennedy Hill, which was one wait we didn't have. And everyone else seemed to be pretty decent on the road, so there weren't a lot of issues with really slow drivers, even on the 18% grade.

Our first stop was in a large parking lot, apparently for the Clutesi marina on the banks of the strongly-flowing river. Partly for geocaches, it soon turned into our lunch stop. Monkey spied the Mr. (and Mrs.) Potato cart offering fish and chips (and a pride potato sign), Choo Choo went for a ubiquitous burger, Alex and I went to the Mexican stand, her for tortilla chips with guacamole and salsa, me for a burrito. Lunch was decidedly tasty. Choo Choo would finish off with a butter tart while Monkey and I each had a reasonably decent Nanaimo bar (thus continuing my trend of never having eaten a Nanaimo Bar in Nanaimo).

No more caches in Port Alberni interested Alex, so we continued our trip east. It was nearly a half hour until we arrived at Cathedral Grove, which we had whizzed past on the way out. Cathy and crew had already arrived and were somewhere on the one way paths. We would not see them on our excursion through the park; they were gone by the time we returned to the car.

It had been at least 23 hours since I was last in Cathedral Grove and I recall being pretty impressed the last time. Somehow, the trees seemed smaller, not as impressive as they once seemed to me. And I still haven't seen a redwood or a giant sequoia, so it's not a matter of scale. Maybe it's just that Allen and Jean have four massive cedars in their yard that are about the same size, so the trees in Cathedral Grove just don't seem so large anymore. 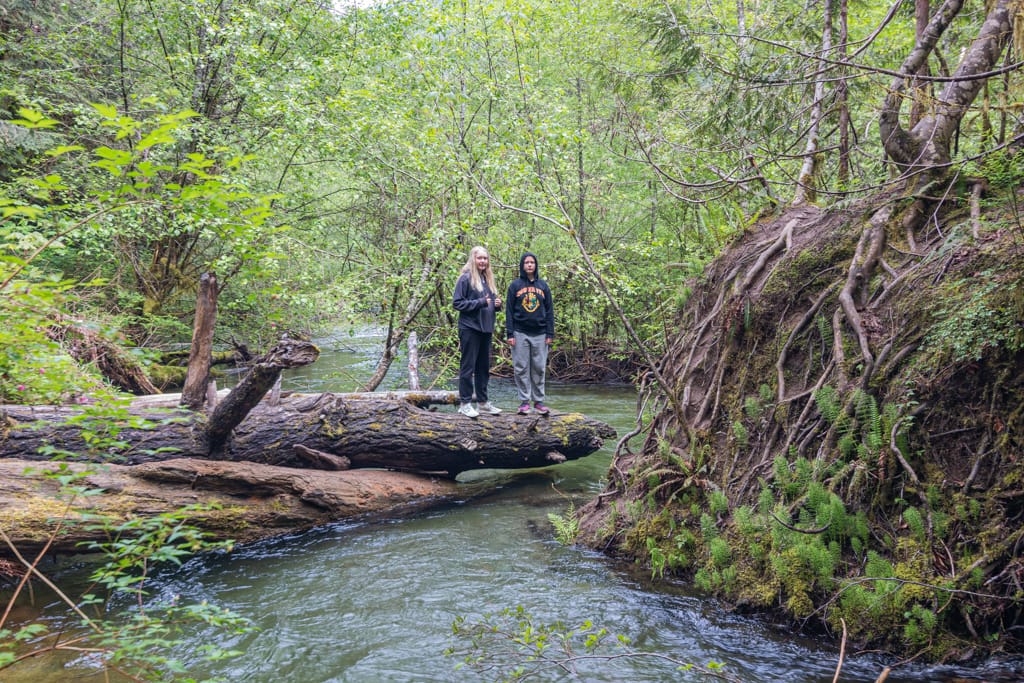 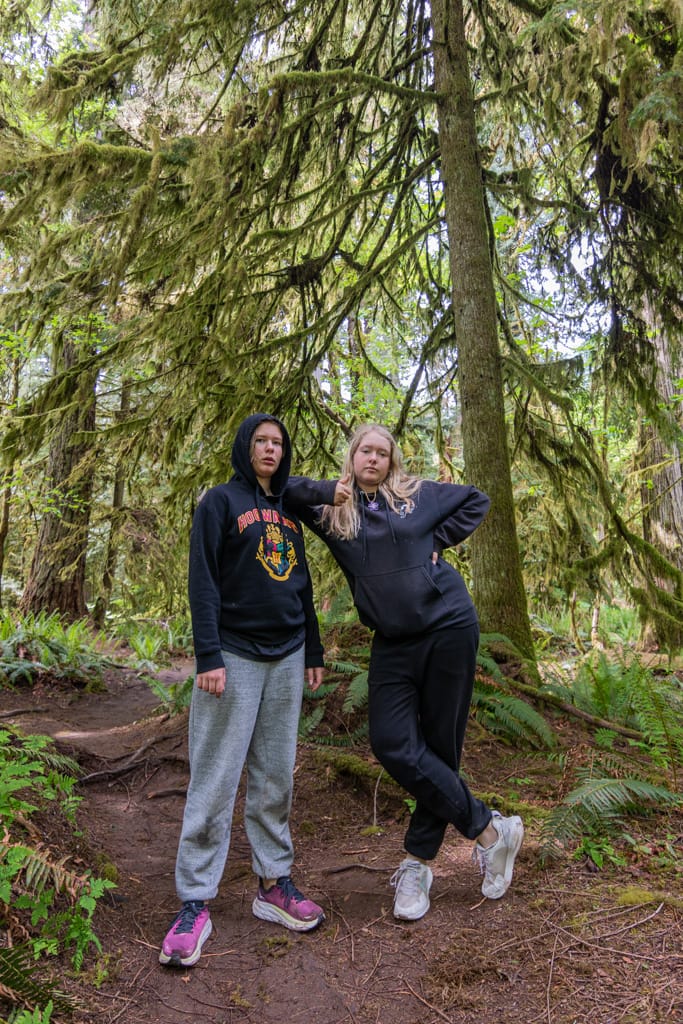 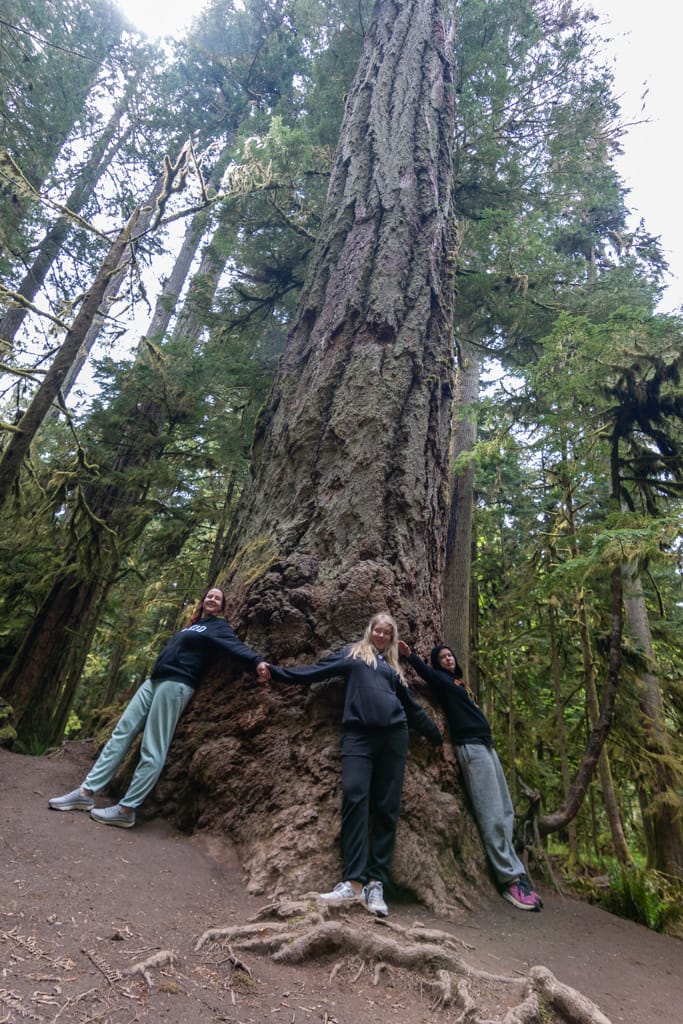 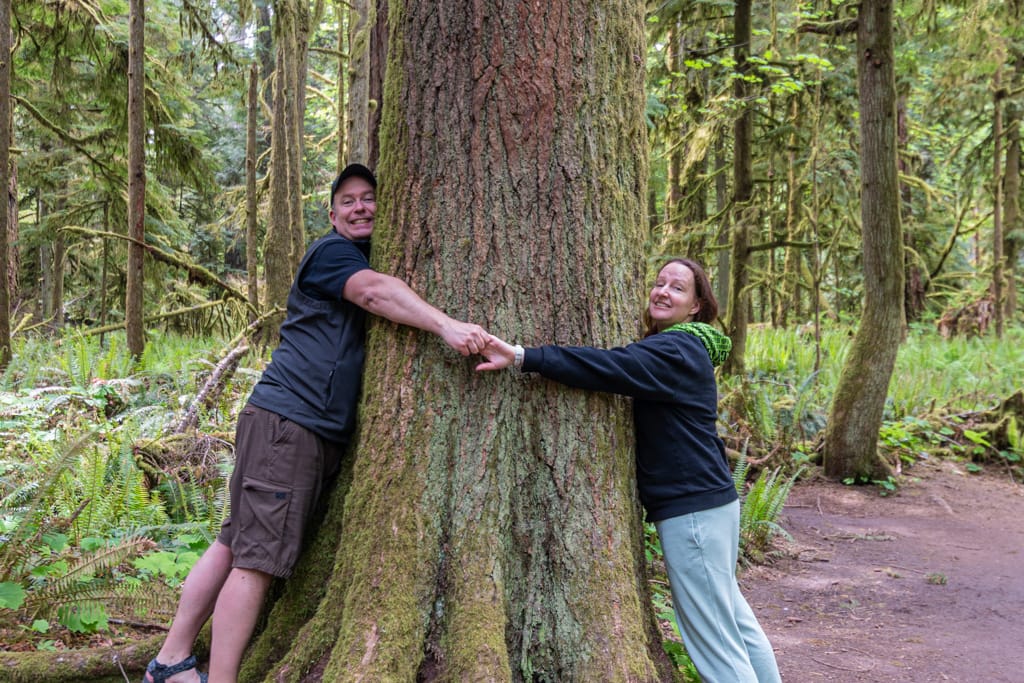 We stopped again in Coombs, mostly for Alex to get her geocache there (which, hilariously, was hidden in a massively oversized ammo can). But we bought nothing this time, although the girls did spend another lengthy session in the used bookstore.

Caches took us further into Parksville and down into Parksville Community Park. After a few twists and turns, we dropped Alex off while I tried to find a place to hang out while she wrapped up her search. This turned into a massive frustration, as everyone seemed keen to come down to the beach, meaning parking was difficult to find anywhere near where Alex was going to be, finally giving up and dumping us in an overflow lot. Which is when Alex said she needed her tools, which of course were in the car. Eventually we had to come out and help, but it was for nought -- the cache simply was too well hidden.

Back into Nanaimo, we headed to Northfield Road, in search of not a geocache, but a gluten-free Nanaimo bar. Alex, thwarted of a dessert at lunch, had found that the Nanaimo Bakery offered a gluten-free version. That send us wiggling to Meredith and Bowen. It was a massive bakery, with nearly no-one in it.

It was now after 16:00. We had considerable time until our ferry, but I was starting to get that panic that said we needed to not stray too far from the path, lest we lose our ferry spot. So we continued down Bowen until we got to Terminal Avenue, which is also the (actual) Trans Canada Highway, which led us right to the Departure Bay terminal.

And an extra hour wait. Figures.

I found Mom, Brenda, and Mike outside the gift shop/food court as I was looking for something to drink. They'd arrived about 20 minutes before us and were near the front of the line. Craig was zonked in the truck, thoroughly sick from the excursion. Debate howled over whether or not the ferry was actually late, as the status boards had not yet been updated. We were told by the ticket clerk, so I had faith of his accuracy, which was later further bolstered by the real-time map of the ferries, showing ours about an hour away.

It had been a long time since I've had to wait for a ferry. Before there were reservations, one just had to arrive and hope. Hours, gone! But with the reservations, waits didn't entire go away -- one still has to deal with the reality of mechanical breakdown (which happened to one of the three on the route today, taking it out of commission in Horseshoe Bay), medical emergencies, strong winds or otherwise wild weather, or a vehicle breakdown that delays the loading or unloading.

Cathy and crew, at least, made it to the other side as scheduled, and Jen attended her callback as expected.

I prepped the family for a quick evacuation of the car. It was dinner time, and with all the delays, people were going to be hungry. Lineups would be long. No sooner than the car had stopped that we were out of the car and up the stairs, coming out next to the cafeteria, conveniently. The line was only just starting to come out into the hallway, which was almost perfect. Alex opted for a salad, the girls and I went for the BC Burger combo. As we were departing with our meals, Mike, Brenda, and Mom appeared in line. Despite being first on the ship, they had taken a bit to get to the line.

Alex had found a table for us, next to Craig (reserving a table for the others), who was looking rather uneasy from his journey to the ferry. He would nibble loosely at others' food, but wouldn't have a meal himself. He'd later go "watch TV", which enabled him to sleep for most of the journey.

The trip back to the mainland was average for a ferry trip: the usual hour and a half(ish), fairly easy seas, and even less wind than our trip out. But despite an apparent announcement on Cathy's ferry of orca in the area, we were without porpoise. 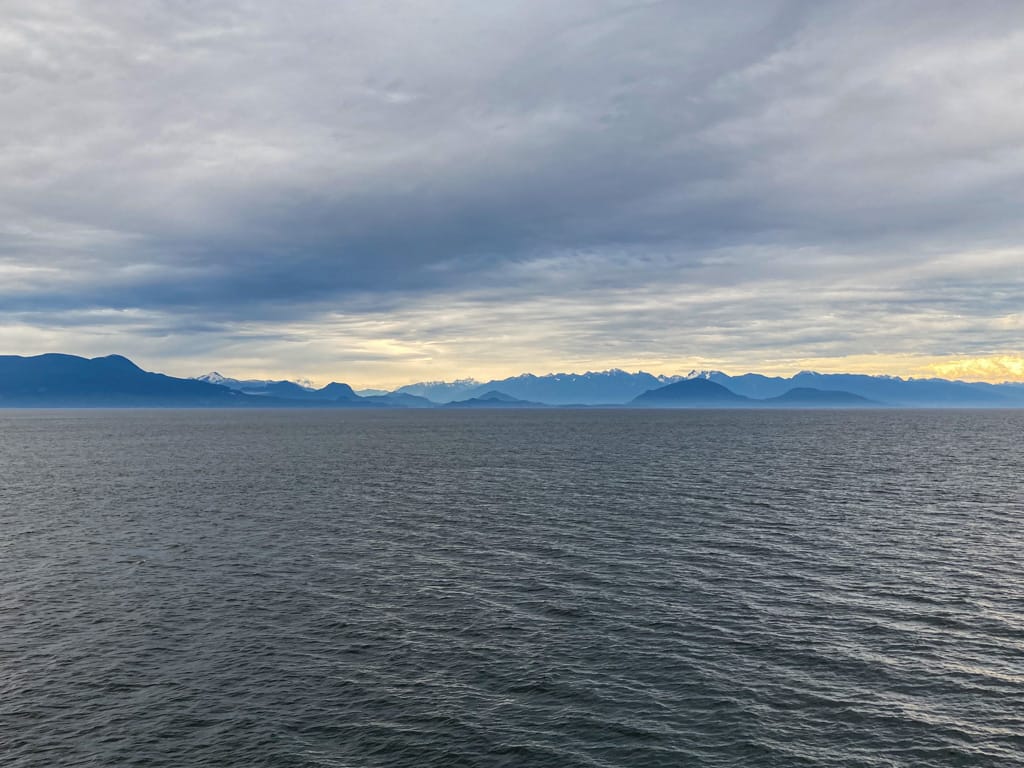 The plan upon arrival was fairly simple: we'd go to Ruskin, Brenda and Crew would take Craig and go to Jen's, and Craig would Uber to downtown Vancouver where Cathy and Crew were staying. That seemed a bit inefficient to me, so I offered an alternative. Arriving in Horseshoe Bay, Craig transferred to our car (in the front seat, no less) and we took him over the Lion's Gate Bridge (which the kids hadn't been over before, I think) and down to the Sutton Place hotel on Burrard.

We said our goodbyes -- it's unlikely we'll see them again before they leave on Saturday -- and then headed down Nelson to Pacific Boulevard. It was a moment to remember why I loved living in downtown Vancouver, especially in the summer, as it was alive even at night, with people on nearly every street, open art galleries, music venues, and open-air restaurants. It leaves Calgary in stark contrast, which is a veritable ghost town at night, a concrete wasteland that few enter and even fewer stay.

Narrowly missing a stray dog crossing the road (insert joke here) near the Cirque du Soliel tent across from BC Place, we headed to Terminal Ave and headed east to Hwy 1. Once again, I had to navigate the 7/7B interchange in Coquitlam, which I normally get right but for some reason forgot that I needed the 7B and ended up going into downtown Coquitlam, which Alex enjoyed as a change, as did I. Greater Vancouver is really quite pretty at night, especially when it's raining.

It was after 22:00 when we arrived in Ruskin, and I made it clear to the kids that we were to be as silent as the grave as we entered the house, as we didn't want to wake Allen, who has recently (under doctor's orders) been going to bed at 21:00. But he and Jean were wide awake and functioning when we arrived. Whether that was to avoid us waking them or because Allen was feeling that much better, I don't know.

We're here for a couple of more days before we head back. I suspect it will be a quiet visit.