It was a quiet day, overall. Unlike yesterday, it was drizzly, if a bit rainy. And that was okay, at least for us -- we were on the we(s)t coast, so of course it should rain. And we had no particular plans, so having a down day was a good thing for all of us.

Alex's big desire for the day was to knock off a bunch of geocaches that were on a trail in a greenspace (really, a bog) just south of downtown Tofino. The girls were more interested in not going, leaving Alex and I solo.

The Tonquin Trail runs through Tonquin Park, out to Tonquin Beach (notice a pattern?), a bit of which Alex had done a couple of days earlier in her quest to find everything in the area. She'd done that part solo, but wisely asked for company for this next bit.

I say "wisely" because the first thing we saw when we arrived at the trailhead was "Cougar in area". That was alongside a lengthy sign that mentioned how flipping dangerous the rocky coast can be (notably with rogue waves) and how to be (somewhat) prepared for trouble. We would not see the sea on that particular hike.

The first bit was to find a cache she hadn't previously found, which was on the Tonquin Trail proper. Which very quickly ran alongside a construction site. As much as Tofino might sell itself as a small, quaint little village, it's growing quickly. That's as far as we would go on that leg, so double-backed to the trailhead and headed down the Tonquin Trail Connector, a gravel path that heads southeasterly.

Alex simultaneously loves and hates geocaching in British Columbia. It's more stuff that she hasn't found, which is good, but the patterns here are very different than in Alberta, so she struggles with them. (I think Albertan cachers are, by and large, easy. Some of the ones we've found abroad are significantly harder.) We ended up having to bail on the first one, not finding it at all. The second one wasn't too hard, the third baffled us until we found a plastic frog that seemed to be saying: "Look here".

By this point, I was getting quite damp. Although I had brought my waterproof windbreaker, the lack of actual precipitation had led me to wear only my vest, which was decidedly not waterproof. Fortunately, the third cache was the last on the Connector, so we double-backed to the first one. Having seen the pattern of the other two, the first, unfound cache was soon revealed and we retreated to the car.

On the way back, we decided to trip in on the Tofino Distillery, which we had seen the sign for on previous jaunts, and spotted the building during our short visit to the Brewery. But it wouldn't open until noon, leaving us a half hour to spend.

Instead of spending 30 minutes in the car, we headed to the other end of the Tonquin Connector, in the solitary industrial park (because why not put a hiking trail into an industrial park, I guess?), as there was one last cache Alex needed. This one wasn't on the trail, however -- it was up a fairly steep, rarely-used gravel drive way that terminated at a barricade and signs that said "No Public Access".

Beyond that was the town's water tower, a massive concrete bin, easily 10 metres tall and double that again in width, atop the highest point. We had to dig deeper into the trees onto a rocky ledge that admittedly offered one of the nicest views I think we've seen this entire trip. 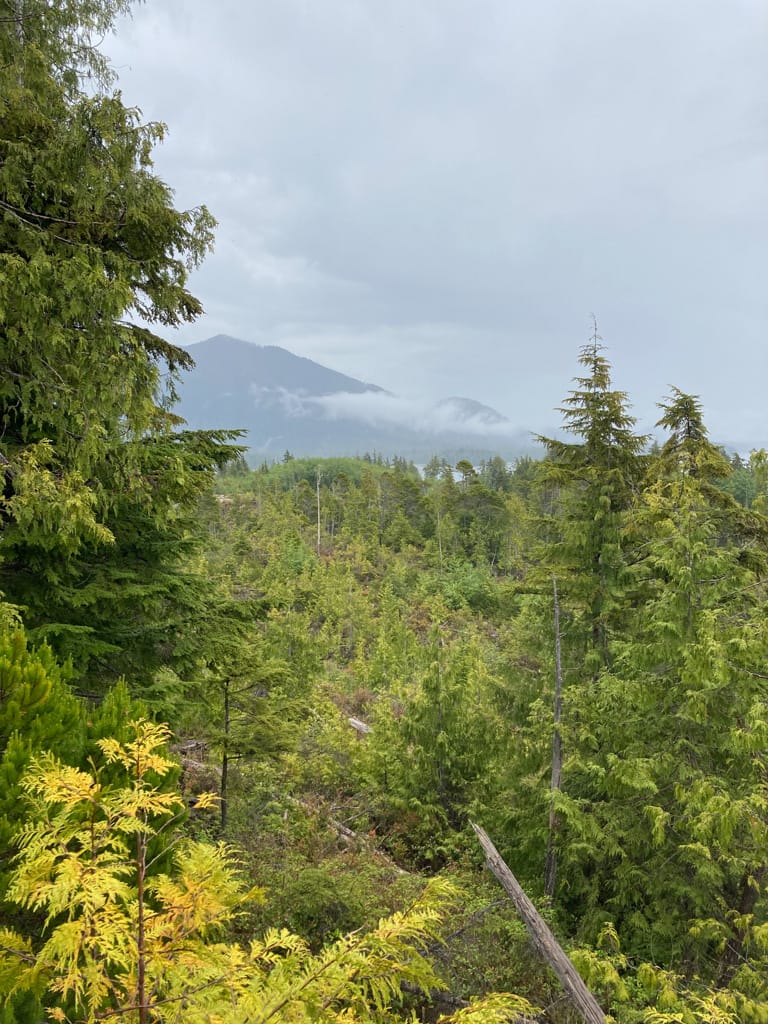 The Distillery was minutes away from opening when we returned. Inside was a very nice sitting area and I could see us having a tasting there if time allows ... uh, today, I guess, as most of us are leaving before 10am tomorrow. It's really hitting hard how little time we have here, now. We left with a Lavender and Mint gin.

We returned to the cabin for lunch before going back downtown again, but this time with kids in tow, specifically Monkey, Choo Choo, and Nat. We were there for the gift shops.

I'm not a fan of gift shops, especially generic ones. While everyone might bitch and moan about the ones at the end of Disney rides and certain museums, they tend to have things that are relevant to the things you've just seen. Generic gift shops have generic shit, and I bore very, very quickly.

We hit a few stores, all without any success (for me, anyway). I think I blanked throughout the journey as I recall very little of that. We even went to the bookstore (again), where I expected to lose the entirety of my family, as bookstores are pretty much a black hole for them.

By this point, we were planning to intersect with Cathy, Craig, and Tori, who were coming from the cabin to have afternoon drinks at the Shed, a pub-y restaurant that was conveniently next door to the bookstore. I met them for a table, with Alex and the girls following soon after.

We crammed into a booth. Delicious deep-friend pickles, ice cream and waffles, and Choo Choo even had an Affogato -- ice cream with espresso. (I had the liquid dregs that she refused to eat. It was amazing.)

Dinner that night was Mike and Brenda's doing: seafood, especially crabs. Mike had even trucked down to the docks to get fresh dungeness, caught that morning. The spotted shrimp disappeared almost instantly.

Whilst in the midst of our appetizers, we started to review the plans for the following day: getting back to the mainland. All of us were headed out in two ferry crossings: one at 15:00 and another at 17:30. The reason for the discussion was Jen: she needed to be somewhere stable and quiet (with solid internet) at 20:00 for her callback. And would the 17:30 get her there in time?

That led to Cathy offering up one of her kids to come with us, giving Jen a ride. However, the kids didn't want to be without their mother, which made it a bit more difficult. And it was determined Rob should probably be there, just in case, so one kid alone likely wasn't enough.

It hit nearly everyone at the same time: Craig. Move Craig out and both Jen and Rob could fit in Cathy's Jeep with the two kids. Craig would go with the Znacks. (We would continue on our own, mostly because I knew no-one else would tolerate geocaching.)

Then it was crab time.

While we thought the cousins would be interested in trying crab, they were mostly revulsed (if a bit horrified) by the live crabs being dunked in the boiling water. They collectively ran away when they came out to be eaten.

Alex ate her mac and cheese, outside, away from the stench. (Rob had to work until 20:30, but isn't much of a crab fan, anyway.) I sat with a massive crab on my plate, tools in hand, and started away. Jen looked a bit green, but followed suit.

For the record, dungeness crab is delicious. It's just a massive pain in the ass to get the meat out if you're not experienced at extracting meat from crab shells ... which I am not. Mike powered through his two crab (we had two each) in no time flat, finishing both before I was even close to finishing my first.

Cathy was beside herself most of the meal. She couldn't believe her big brother, who had for the entirety of our childhood not only refused seafood of nearly all types but adamantly claimed how gross it was, ate two crabs. (I should have mentioned the deep-fried shrimp heads back in '02.)

Cleaning up was a challenge. Because we're still technically on the edge of wilderness (a large part of the land to the sound of us is forested, meaning all kinds of animals), you're not allowed to put garbage outside after 15:00 for pickup. Which meant all of it had to go into garbage bags and be taken out to the large, bear-proof bins.

The hardest part was the crab boil water. Putting that much hot water into the toilet would, no doubt, break something. The sink was similarly out of the question, though mostly due to the smell. There were no open sewers. And Brenda, for whatever reason, wouldn't let us take it to the beach and pour into the ocean. Which, of course, is exactly what Jen started doing (after becoming utterly frustrated with the circular argument) and surprisingly made it a hundred metres dead-lifting a huge pot of hot water on her own before I caught up to her and helped with the rest of the walk.

She very openly and loudly made lots of noise about letting baby crabs loose into the ocean. Because of course we have lots of baby crabs in a large pot? In any case, the water was dispersed with no impact to the beach itself.

Being our last night, the cousins wanted a last run at the beach, even in the dark, with most of them (except Monkey) wanting to sprint between the cold ocean and the hot tub on Mom's porch. Jen, of course, joined them. Alex followed shortly afterwards. (Frankly, I'm amazed Alex hasn't spent the entire trip in that tub.)

And I heard the shrieks, though how much of that was from entering the cold sea vs. just going from comfortably warm to very cold, I don't know. Nor do I know definitively if either of my kids went into the ocean, complete. I'd bet them $10 each a couple of days ago to go in all the day. They claim they have, but I have yet to see any proof.

As I chatted with them while they were warming in the hot tub, Choo Choo claimed quite vehemently that they'd seen bioluminescence in the water. (Yes, my kids know what that is.) I know of the glowing blue waves in tropical places, having seen many pictures and videos over the years. But in Canada? With water this temperature? I didn't buy it. Trick of light, maybe.

So I went down to the beach (no small feat, with a cloudy night and no lights) down to where the light waves rolled up onto the sand. Where I came down, however, there was a string of LED lighting (the railing on the steps to the beach) that might have been casting a glow. So I went a few dozen metres further away.

Lo and behold, every now and then, I saw a distinct glowing clump that would light up as the waves came in, then winked out. The winking was the settling point -- bioluminescent algae exists in Canadian waters. Sadly, not so bright that I could get a picture or even a video.

Upon pronouncing that Choo Choo wasn't seeing things, I was asked to fire up the sauna again. It's not a huge effort, but it does take a little bit to get it nice and hot. As I was not going to be joining them in the sweat house that evening, I got down to packing up. It was going to be an early morning, and I didn't want to be wrestling through it.

Although the flotilla of women breezed through the house and into the sauna, Jen never came, having been utterly distracted by Cathy and Craig. By the time she arrived, we were shutting down for the night.

Tomorrow, we leave for some semblance of reality. Admittedly, the thing I'm least interested in is the drive. Ugh.