It's amazing what one good night's sleep can do for you. I felt substantially better after a restful night (though I'm told I snored horribly), ready to take on the day.

My day started, with a quick check-in on Cabin 20, at Crystal Cove's inlet, a small beach that is probably listed as part of Mackenzie Beach, but at the very south end. The tide was just starting to come back in, and I wanted to see some of the tidal pools' contents before the sea covered them all over again. 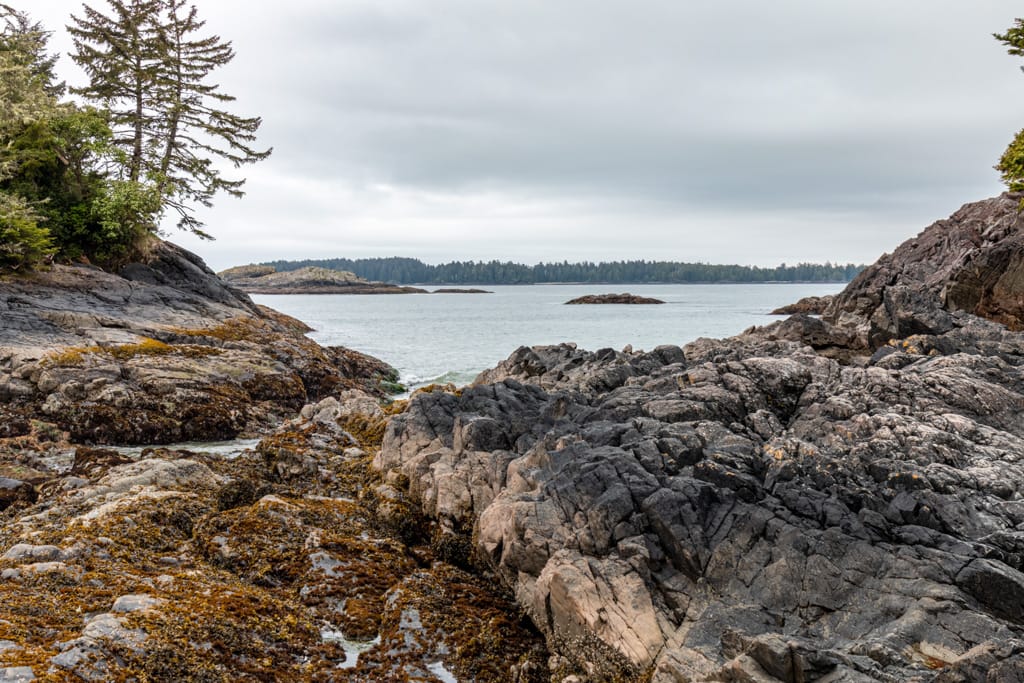 I slipped twice, once really badly, before realizing/remembering that I needed to walk on the barnacles to keep myself from smashing my head onto the rocks. I was rewarded for my care: mussels, anemones, sea stars, Dungeness crabs (alive and dead), hermit crabs, even one freaky-looking Ligia oceanica, which is littoral woodlouse. 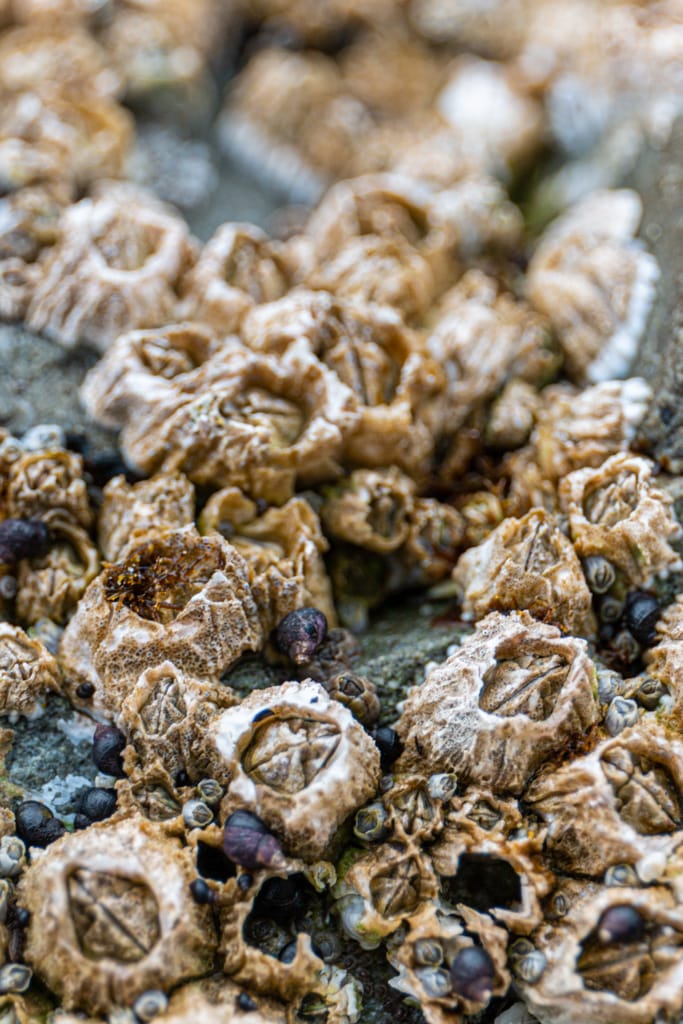 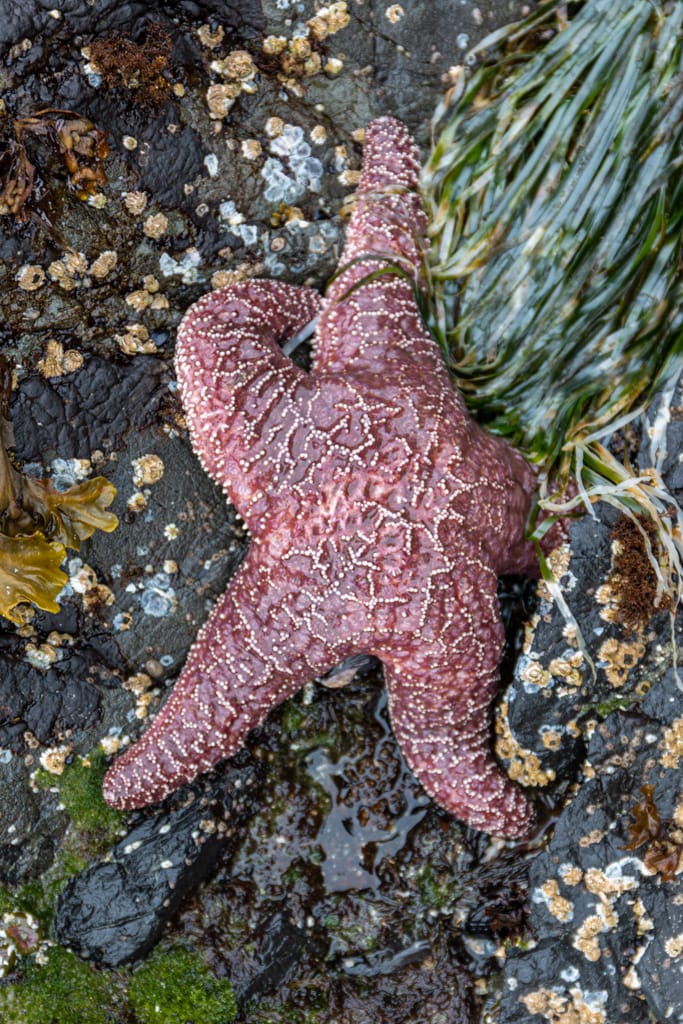 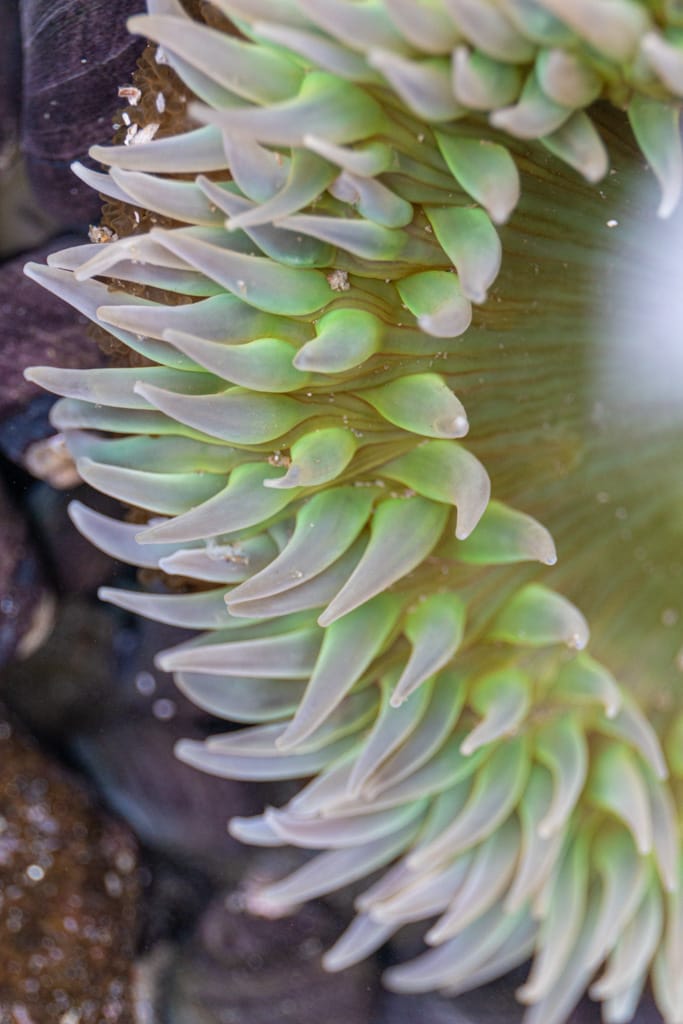 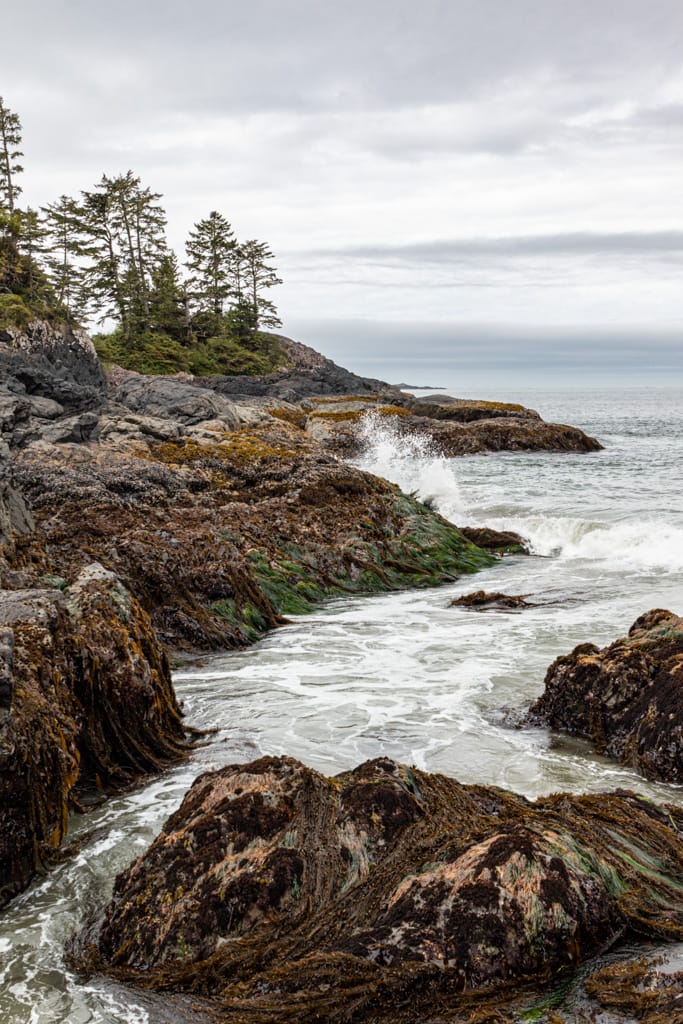 This was the start of my day near or on the water. Since Mom and I had officially settled on Tofino, one of the biggest concerns had been what to do. That's when I hit on the idea of a whale tour, and that was mostly to satisfy Alex's need to see orca in the wild. She and I had done a whale tour on our first trip to Hawaii and had (mostly) enjoyed it, so I hoped that we could do this as a group in Tofino.

Finding a tour was the tricky part. No zodiacs, please -- we need something large and stable, especially if seas were going to be unhelpful. There is, of course, no guarantee of seeing wildlife, though the average is still well into the 90th percentile. And I knew that orcas on the west side of Vancouver Island are very transient, so the odds were low. Still, I had to try.

Although the day started off overcast and somewhat gloomy, the skies had cleared substantially by the time we gathered at Jamie's Whaling Station for our tour. Signing us in (and dealing with an incorrect age alignment), we headed down to the dock and waited for our deckhands to take us aboard the Lukwa, a large cabin-cruiser that appears to have been custom-built for group tours.

There was not a cloud in the sky as we broke away from the dock, heading down the Sound towards the Templar Channel, heading towards Long Beach. Finding wildlife on the coast is a bit of a challenge, so all the tour companies work with one another -- if one sees whales, they tell everyone else. And today, the whales were near Long Beach. 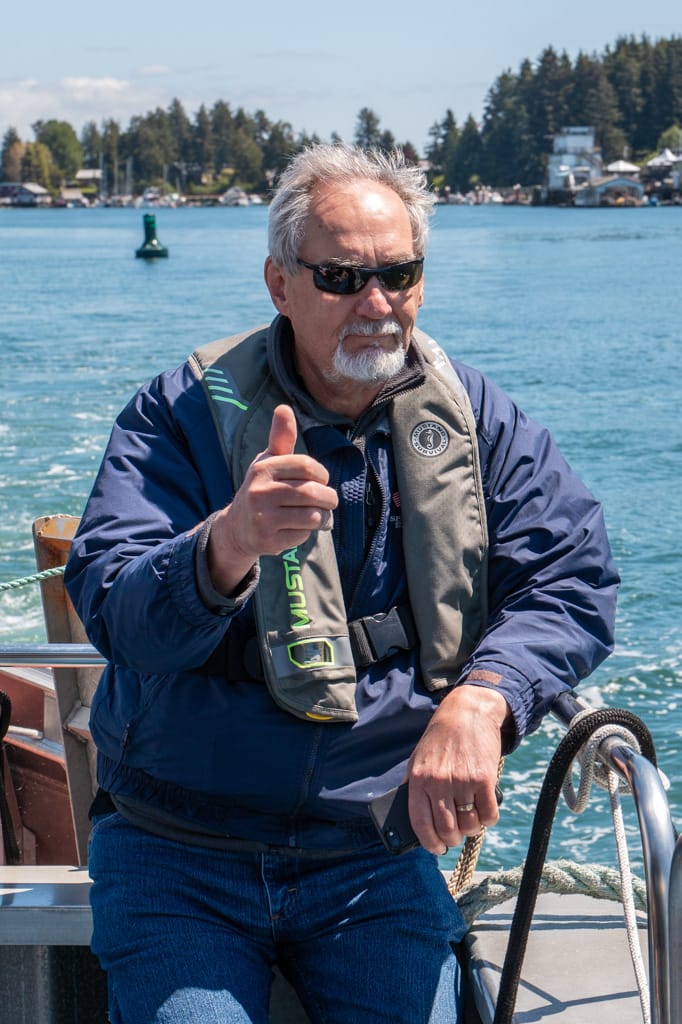 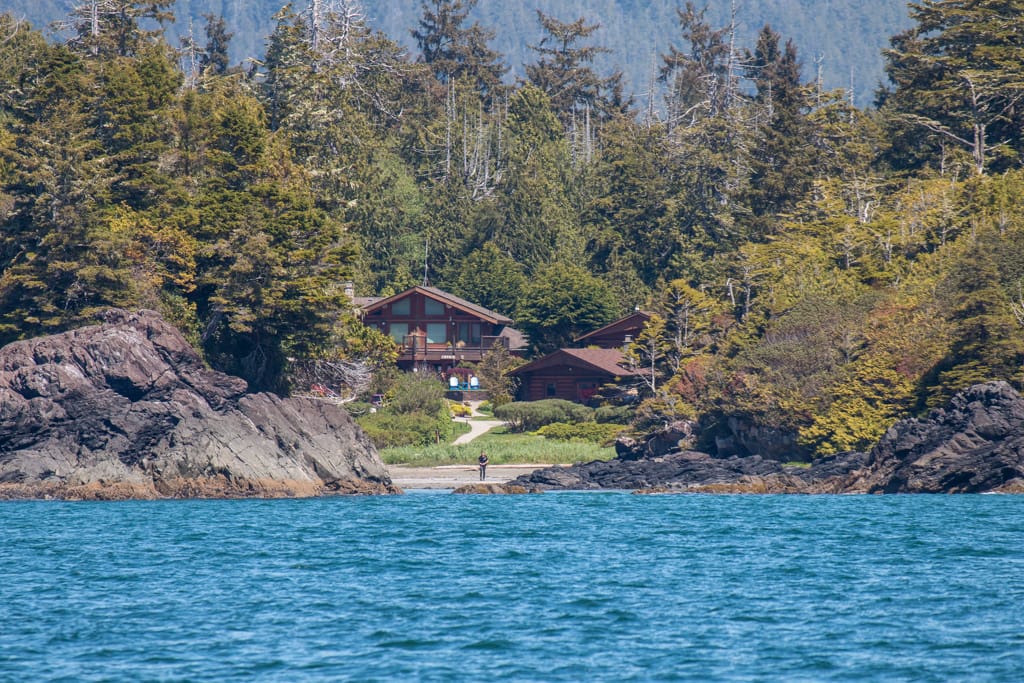 The trip down, alone, was worth the tour. The shores here are rocky, any vegetation is ripped away by the ever-present waves; rogue waves keep any significant building set far enough back to be safe. We passed the Lennard Island Lighthouse -- one of only a few manned lighthouses left in Canada -- and learned that there was an open position for a lighthouse keeper. I let the romantic notions swirl around while we continued. 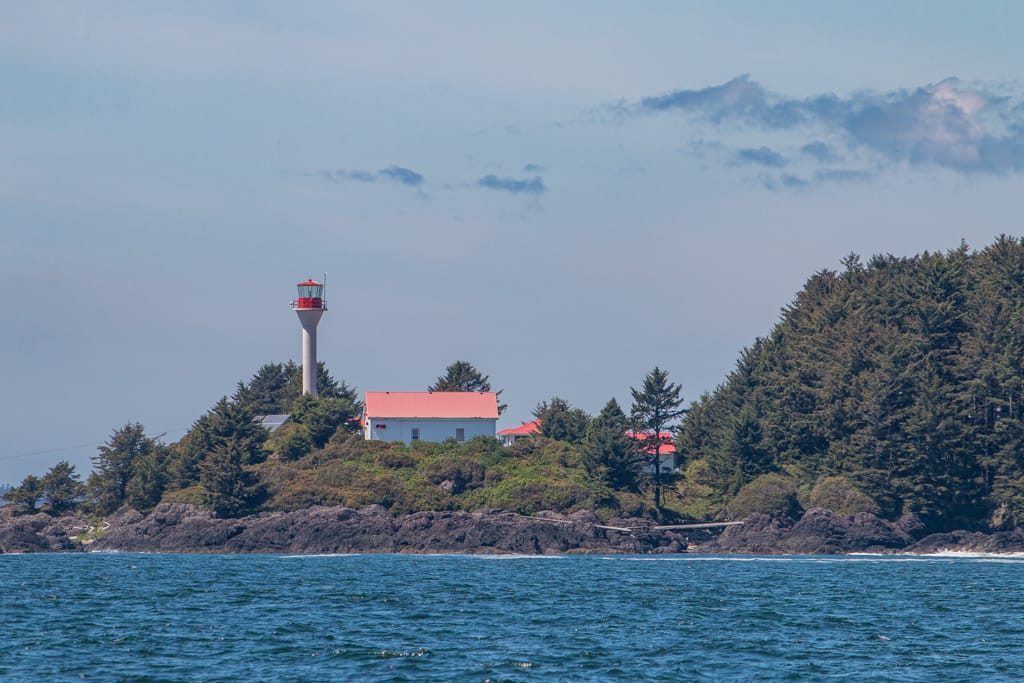 Binoculars in hand, I tried to look for whalesign -- the telltale burst of water and mist from a surfacing whale. All I got was a bit of queasiness, so I put the binoculars away before I ended up feeding the fish. 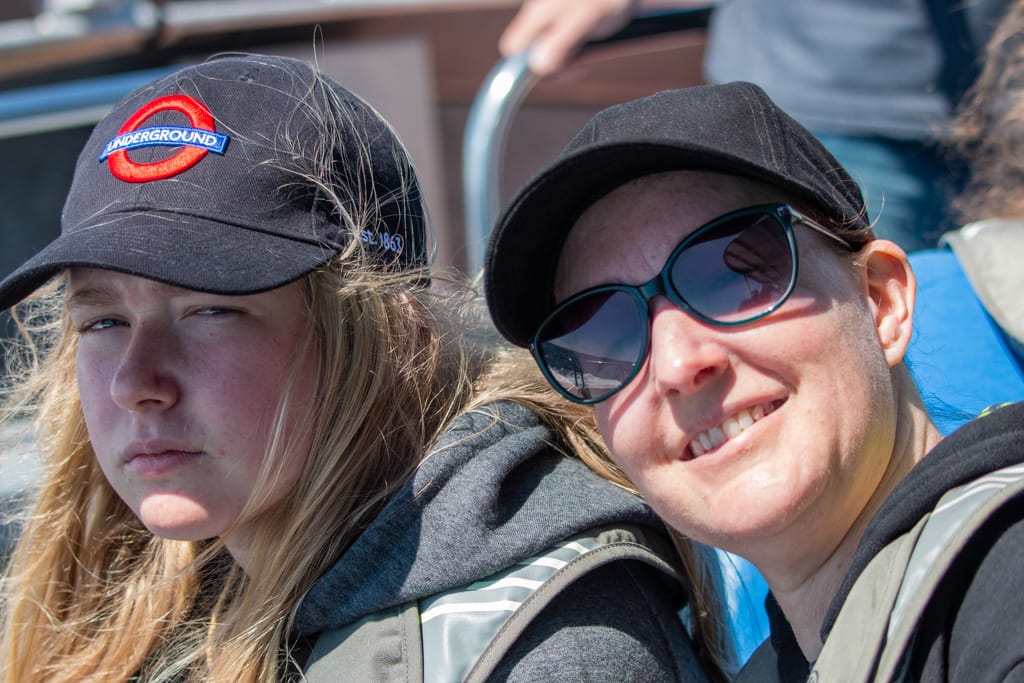 After almost an hour, we arrived in Long Beach. Already, we could see a few other boats (including a couple of zodiacs, to which I commented to Mom that I was very happy to have booked a larger boat). The Lukwa's captain already had information that there was a whale, so we approached the location very cautiously.

And there it was: a short burst of water and mist from a very low blowhole barely emerging from the surface: a lone grey whale. I had memories of our encounter with humpbacks in Hawaii and I had visions of fins and tail slaps. What we had was a pattern: one surface, a 8-15 second pause before a second larger surface, and 2-3 minutes of nothing while the whale went to the ocean bottom to scoop up mouthfuls of crustaceans and isopods that make up the bulk of their diet. As far as whales go, grey whales are pretty dull. 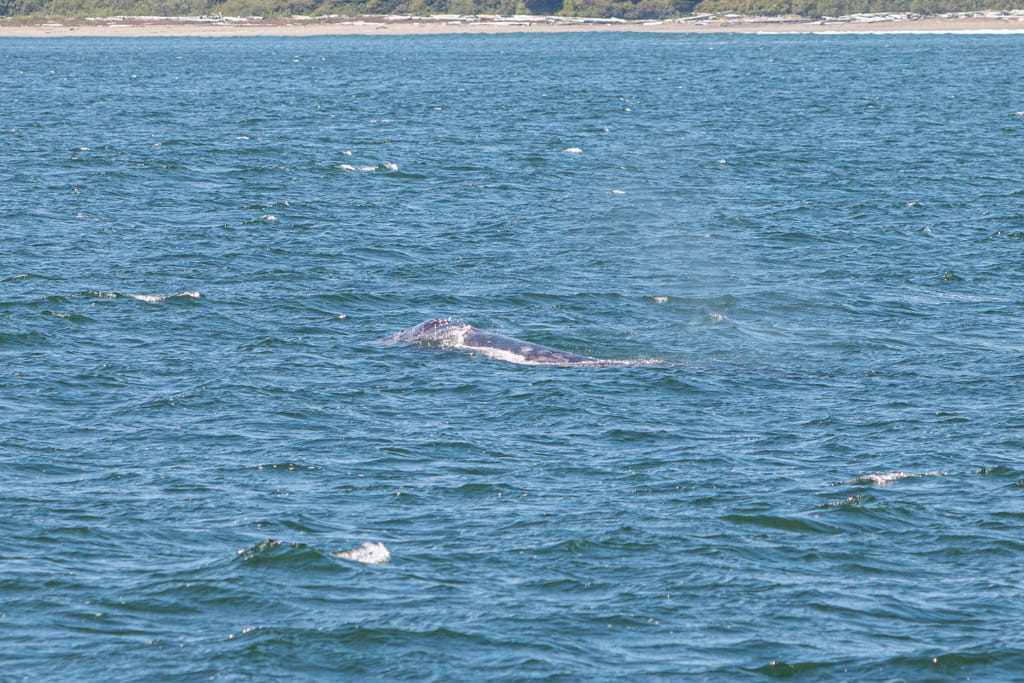 After almost an hour, we started our journey back to Tofino harbour, but took a slightly different route, squeezing in between the shore and small, unnamed islands in search of any other sea life. We were cheated out of a sea otter, then were rewarded with a colony of sea lions, sunning themselves until the tide came back to refloat them. 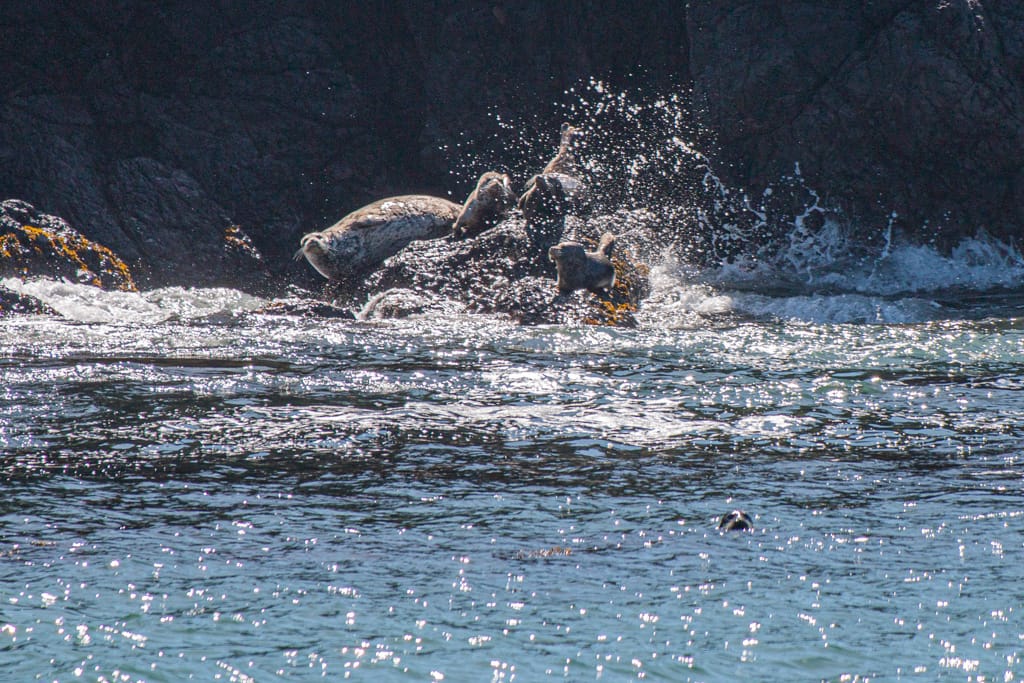 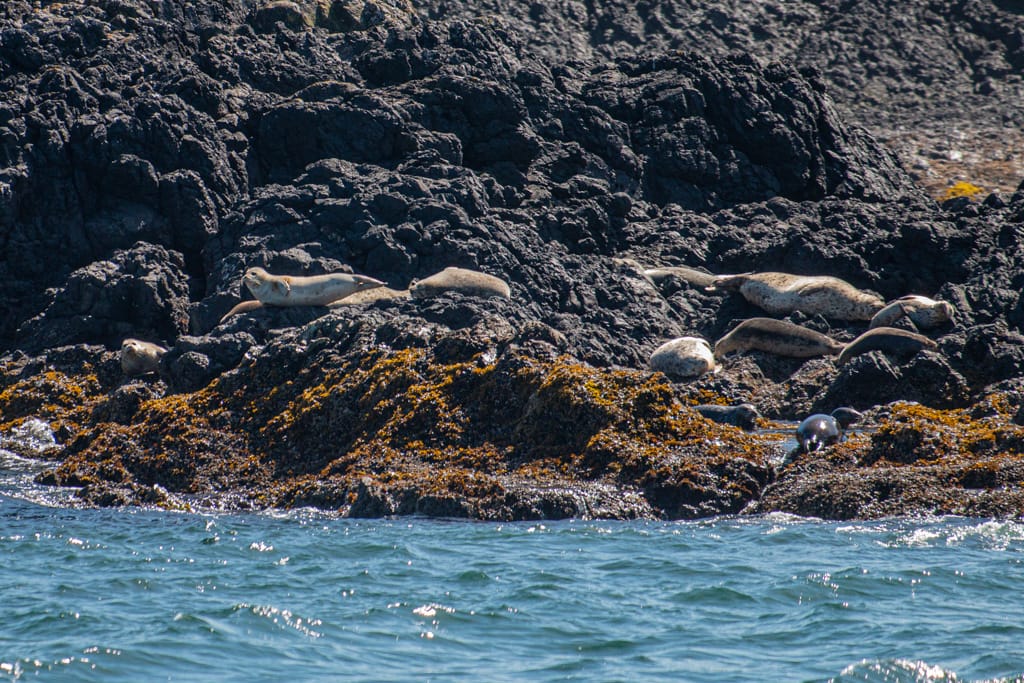 Despite the larger size of the boat, several of our party didn't enjoy the trip too much. Most of the cousins were a bit off, Monkey had to take a Gravol and passed out for a bit; Rob spent most of the trip indoors. Craig, on the other hand, only came inside to warm up, being in a t-shirt and shorts for most of the ride, including being on the bow in the wind. 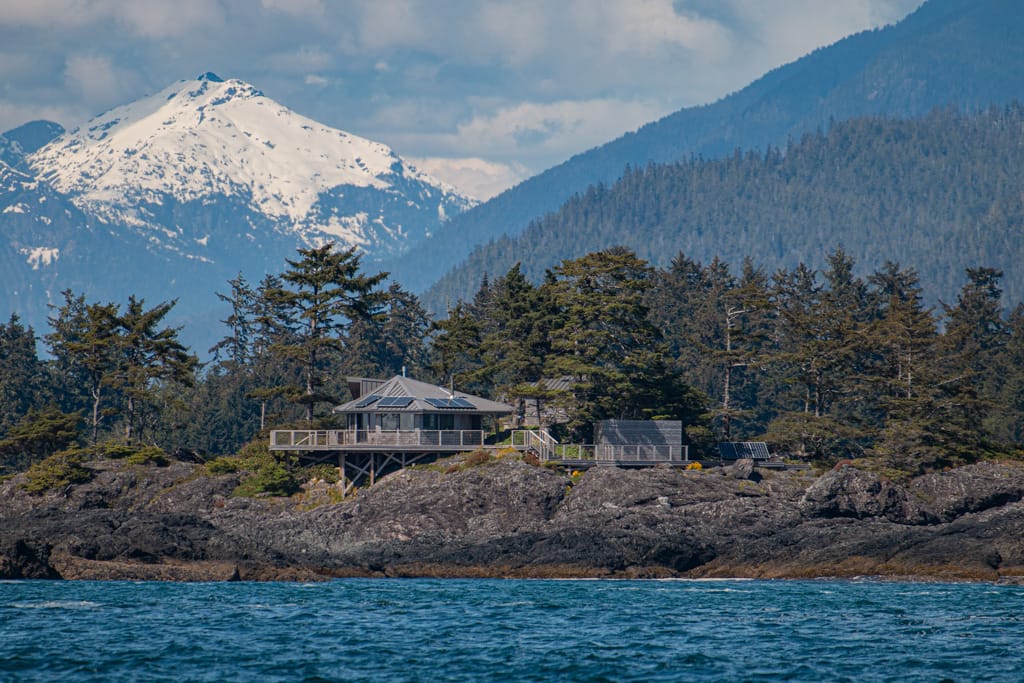 The harbour somehow looked even better when we returned, possibly from a different angle of sunlight. We took a group shot just before disembarking and heading back to the cabins. We stopped briefly at the Tofino Brewery so I could get some beer to pay back Jen for spilling one of hers. 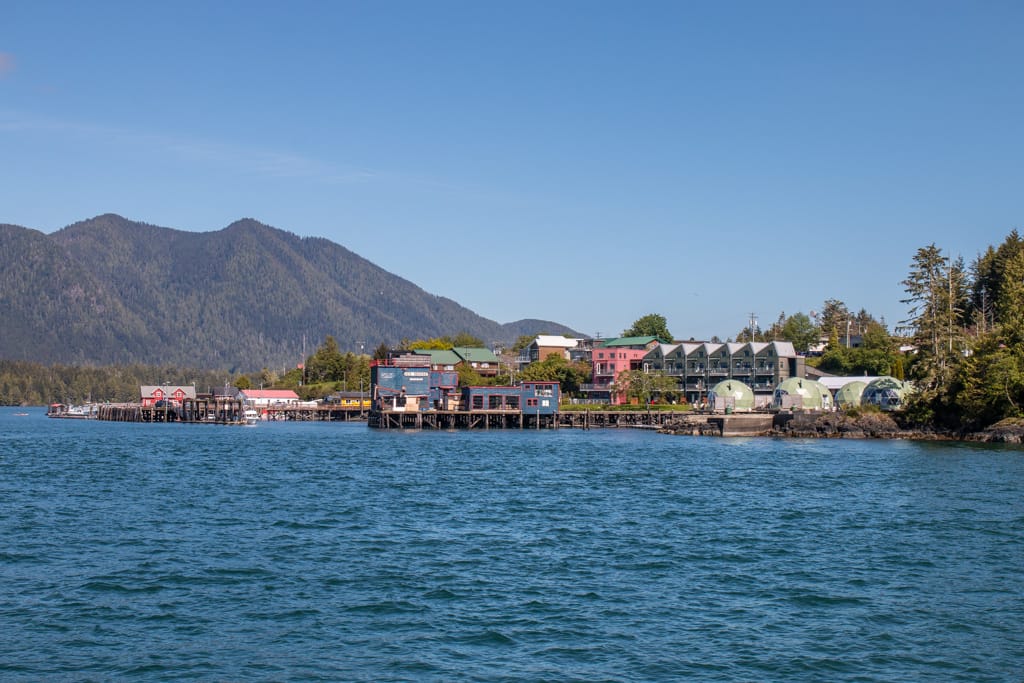 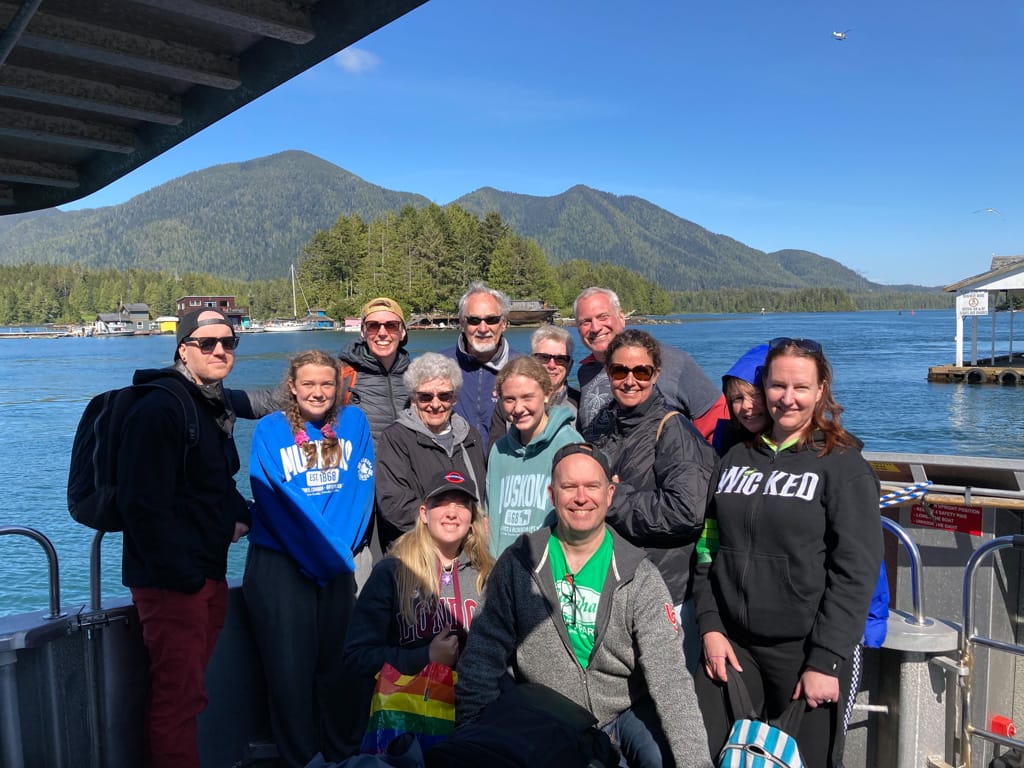 Dinner that night was our one restaurant meal while in Tofino. Mom and I had agonized over this decision, as well, trying to find something we wanted but making sure that others wouldn't be assaulted with seafood-only menus. Thus we landed on Shelter, a restaurant literally across the street from Jamie's. While I had the brilliant idea of going from the tour right to dinner, Mom had wisely suggested that we plan for a bit of time in case anyone wanted a shower or to change, since we had no idea what the tour would be like. It also gave the slightly seasick a bit of time to relax before being subjected to food.

I dressed in my loudest, most obnoxious Hawaiian shirt (I've got over a dozen of them, now), though nearly everyone else wore their Salty Sea Dog Adventure Club shirt. Clearly no-one had told me there was a dress code.

Shelter is a large restaurant with two floors. They put us on the top floor, rather wisely, though did not tuck us into a corner, which would be the even wiser move. Such as it is, Brenda preemptively apologized to nearby tables -- there was a ruckus a-comin'.

When Jen arrived, she unrolled a long, blue sheet filled with dozens of pictures of my yore. While Day 1's arrival had been more for Mom, it seemed tonight was to be for me. "Oh dear god," was the only thing I could utter as some of the pictures hit home. But the sheet was also too long to hang in the space (again, had we'd been tucked into a corner...), so the pictures had to be rolled up and held for release later.

Mom took the head of the table, with Cathy and I on either side of her; the girls were at the far end, ruckusing amongst themselves. The spaces soon filled and we started. Wine came out, at least two bottles between the three of us (that I remember, at least). Jen found some truly funky cocktail that I now totally forget, but it sounded really good.

Salmon on risotto with a seafood chowder ("chow-dah!") starter. I could have eaten at least that much again, it was so tasty. I barely got in any conversation beyond Rob (who was to my right), Mom, and Cathy. Even talking to Jen across the table was difficult. Amazingly, no-one complained about the racket.

Whether or not I was planned to be abandoned or not, I'm not sure, but Alex took the girls and they all vanished, leaving me to go with Cathy and Craig. Which took a bit longer than planned, which might have also been intentional, but I genuinely can't recall. (Did I mention that it was good wine?)

We got to Cathy's cabin (#51, next to mine), dropped a few things, then continued to Cabin 20. As we exited the intensely dark lane where our cabins are and rounded the Main Office, we saw five figures heading towards us that I didn't initially recognize due to what looked like white robes, white floppy hats, and white facial hair. Except they all squealed when they saw us and giggled like crazy.

There's a picture, a copy of which is on that blue sheet of pictures I mentioned, of me from 1993. For Thanksgiving, the Tisdale clan had decided to all meet in Waskesiu. I was in my third year of university and had opted to cease cutting my hair or shaving. Some weeks before going, I'd returned from my Ottawa co-op term, my father took one look at me and pronounced that I looked like Jesus Christ ... and then immediately added, to my surprise, "stay the way you are, we're going to scare the hell out of your aunt".

Jen wasn't even 5 years old at the time, so likely didn't have that great a memory of what I had looked like. But presumably that trip, combined with the picture, inspired her to "Jesusify" herself -- which meant Jesusifing all the cousins -- which is what we were seeing racing towards us. Whether it was the wine or just general shock, I didn't know what the hell to make of it, but the group of us collectively danced back to Cabin 20 and the remainder of the evening.

The pictures on the blue sheet? Amazing. I'd seen almost all of them at some point, but most are stashed in albums I rarely look in. Alex and the girls had a whale of a time staring at me from so many different ages.