Over six months ago, during our weekly FaceTime catchup, Mom decided that we needed to have a joint birthday celebration. She was due to turn 80 in April, I turn 50 in July. And although we were still in COVID restrictions at the time, we opted to err on the side of easement of restrictions, unlike last year's "Best Summer Ever" with the highest cases seen in Alberta.

Thus the planning started. And by "planning", it was a lot of back-and-forth. Mom, for whatever reason, wanted to go to Vancouver Island. Initially, she thought about Parksville-Qualicum, with it's massive beach ... and we kinda struck out on what else to do. After a bit of digging around, it seemed like we might struggle a bit.

This led to us looking into Osoyoos, an area in the south end of the Okanagan Valley noted for its wines. The adults would have a grand time ... but the kids? We struggled with that one a bit, too. I was starting to press for Ontario, or even the Caribbean, which for those of us out west might be a challenge, but sounded like fun.

Then Mom threw out Tofino. I have no idea where she got Tofino from, but it seemed like a decent idea. The hard part would be finding a place for all 23 of us in the Tisdale clan. Hotels there aren't exactly huge and the one that could easily hold us would also break our bank accounts (not to mention the requirement to be dressed up all the time really didn't thrill either of us).

But Mom found Crystal Cove. It's a campground with cabins. The only thing I didn't like about it was the lack of a restaurant. I wasn't keen on having to cook -- when I go on vacation, I want a break from everything. However, options were few and we secured the cabins before we lost out on the opportunity. The dates were set: 29 May to 2 June. Time to wrangle the family.

Our part of the contingent would, as usual, drive. Unlike most of our previous ventures to the coast, we opted to break it into two parts, making a stop at Three Valley Gap. That's mostly because I wanted to get to Ruskin at a reasonable hour, instead of the well into the darkness hours that we normally do. What I worried about was how long it would take us to get to Revelstoke.

It never ceases to amaze me that no amount of warning, reminders, and near-badgering serves no purpose in our household when it comes to driving: if we aren't bound by a hard schedule (like a plane), we don't make it out the door on time. I wanted 15:00; I got 15:40.

Save stopping for fuel and not-cheaper-anymore booze (because, this is my family we're talking about), we hit the pavement for the six hour-ish journey to the Chateau of the Three Valleys. Which meant navigating the West Ring Road construction.

Fortunately, Hwy 1 wasn't too bad when we got on at Hwy 22, and it was free-flowing by the time we got to Scott Lake Hill (and finally passed a trucker who repeatedly passed me and then slowed down in front of me). The next stop wasn't until we got to Golden.

The trip to Golden was surprisingly easy, very few Calgarians seemed to have fled to the mountains, so it was an easy trip to the Continental Divide. The rebuilding of the #1 in the last 20 kms before Golden are still well underway and despite a complete shutdown of the route prior to the May Long weekend, it's still going to be a while until they're done.

We stopped for A&W. Not my preference, but I was keeping us to pace. I didn't want to arrive in the dark, or worse, cross Rogers Pass without daylight. I've driven the stretch of the Trans Canada between Golden and Revelstoke many times (I've actually lost count) enough to know it's not a stretch I want to do at night.

Fortunately, it's nearing summer solstice, so unless we opted to take a long time in Golden -- which we didn't -- there was little-to-no chance of darkness, unless there was an accident that tied things up for a few hours. (This is the Trans Canada, these things happen, we've seen them before.)

The journey to the top of the pass went without event, as did the crossing of the pass. Snowbanks still closed off stopping points; they won't melt for another couple of weeks, at least. It was different with the light now fading into the west, which was nice for a change. But we needed to get on with the drive.

We arrived in Revelstoke a little after 8:00pm local time, ahead of schedule considering the time we left. (Yes, do the math, something there is amiss.) We barely blinked and Revelstoke was behind us as we entered Eagle Pass, the valley immediately to Revelstoke's west, and the home of our day's destination.

The sun was setting in Three Valley Gap as we arrived at the Chateau's office. Waterfalls, a result of the still-ongoing spring runoff, cascaded in thin veils on the eastern side of the valley, bathed in the deep yellow light. Parking, we found our room, #201, looking mostly as it had for the last couple of decades, save for upgrades like mattresses and televisions. The Chateau is, to this day, a mildly updated motor inn. 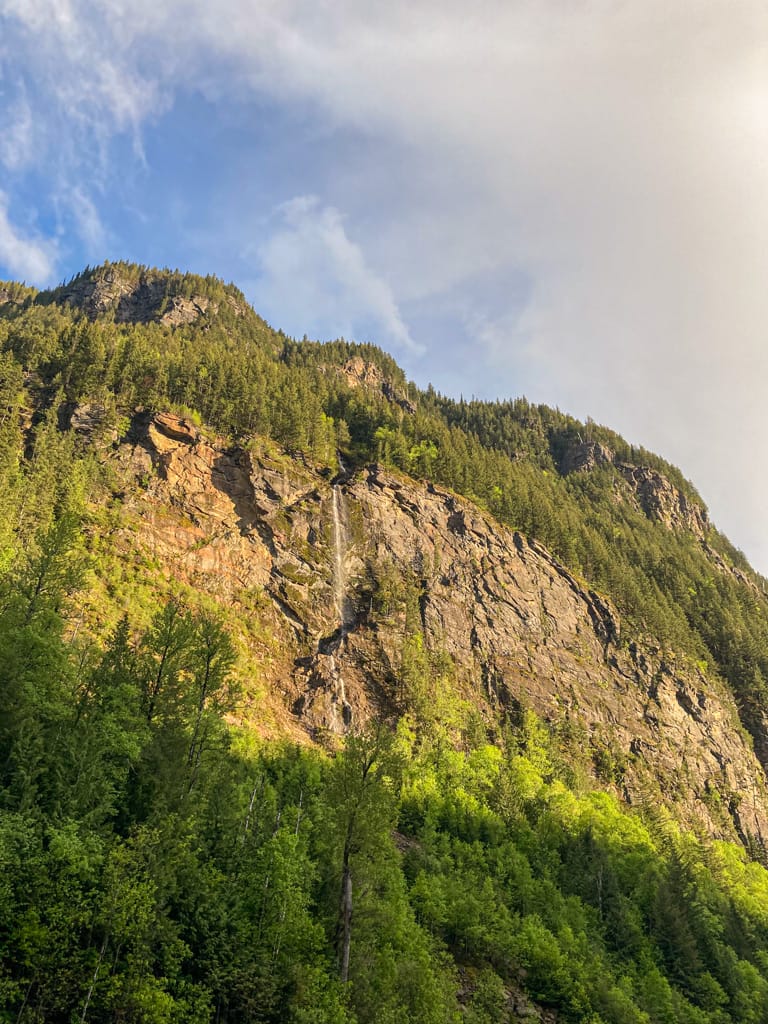 We took the opportunity to prance about in the waning daylight as it left us behind to await night. It was good to get out and walk after so many hours of driving, get some much fresher air. Sleep would come soon after, our day having been collectively long and we wanted to get an earlier start on the day tomorrow.