If there's one tradition we've tried to stick to, it's New Years Tea. We very much know this is an indulgence, one we are very privileged to be able to afford and enjoy. It's a once-a-year thing, it's our allowance to do something nice for ourselves, and after the insanity of the last near-two years, honestly it was really nice to get out of the house and go somewhere. Even if was Banff, again.

Getting to Banff turned out to be a challenge in and of itself. For the last two weeks, we've been in a deep freeze, with temperatures staying at or below -25C. Our near-40 year-old furnaces (our new house has two of them) have been soldiering along, though on frequently, to combat the cold temperatures. (We've also noticed that there are a number of cold spots and cracks that we need to address in the coming year, once it warms up.) Today, we started to a chinook, our first of the year (quite literally), which started to blow in some comparative warmth.

From Calgary to Jumping Pound, the roads were clear and easy. But as we reached Jumping Pound Creek, where we always seem to encounter interesting weather (notably a hailstorm an eternity ago that nearly destroyed my poor Mini, but also nearly a burgeoning relationship with my then-girlfriend, now-wife). Snow drifted across the frozen asphalt in skiffs, caught in the wind and unable to settle as cars blitzed past.

And it got worse. All the way to the summit of Scott Lake Hill, the wind got stronger, the snow seemed to fly around more, and people either were going far too quickly or becoming traffic hazards. I concentrated on the yellow line to my left and the blurring dashes to my right to tell me when I was in the lane.

Through Morley it wasn't too bad, but from there to Ozada the winds just blew everything and twice we slowed to nearly 50 km/h (it's a 110 km/h zone) because too much of the road had become hard to see and lots of other cars in front of us had slowed down substantially. But by the time we'd passed Hwy 22X, the winds had changed (we were entering the mountains) and it was much easier driving. Except for the bend near Many Springs, which has a permanent "Wind Gusts" sign, which gave the car one heck of a shake.

Banff was surprisingly quiet. Whether that was due to the cold (it was only -17C, but a far cry from the predicted -6C), the wildly increasing cases from the Omicron variant (said to be well over 4,000, though our moronic provincial Government has decided to stop telling us numbers and just let the virus have its way), or a multitude of hangovers, I don't know. To give you an idea, we parked on Spray Avenue, next to the Banff Springs, where I have never once seen a parking spot before because it's always packed.

The Hotel had a multitude of signs that effectively said: Unless you have a reservation here, go away.

The Rundle Lounge, where we'd had every New Years Tea when we'd come to the Banff Springs, was closed. (Which was not only disappointing, but you really need to see what they've done with the place -- the renovation is astounding!) Instead, we were in the adjacent hallway, which was likely (once upon a time) a dining hall, adjacent to several conference and ballrooms.

The space was nice, albeit sparsely decorated and not as much of a view (the windows are smaller), punctuated quite loudly with a piano and its player, who although very adept, allowed his volume to be conversationally overpowering, more piano fortissimo than pianissimo.

We had prosecco (I had two; Jean does not drink except on very rare occassions, such as New Years Eve last night). Monkey, for the first time, had a "regular" Afternoon Tea set instead of the Junior Tea, which Choo Choo still had. (We were then told that age technically doesn't matter and anyone could order the Junior if they desired.)

Despite the small portions, tea is just something you don't rush. And we didn't. Although we were the last ones to attend Afternoon Tea today (and we arrived at 14:00), there was no rush to get us out of the area; we weren't the last to leave. 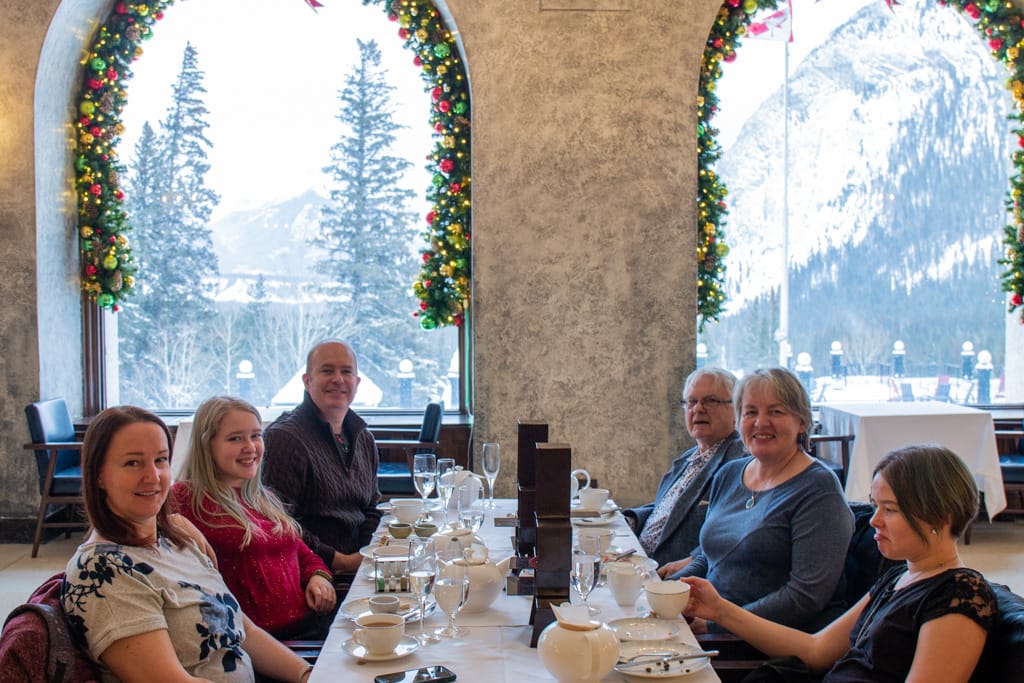 Allen and I fought for the bill. The only reason he won is because my "new" wallet has been insufficiently broken in, and my credit card gets caught too easily. Next year, Allen.

Unlike previous years, where we'd gone to the Upper Hot Springs or spent some time rooting around in the stores downtown, we simply returned to the car and headed home. Although the winds had calmed somewhat, we still had a good tailwind for most of our return trip, pausing only to attempt to find a geocache in Canmore (aborted due to snow), a short bung-up with a stalled tractor trailer on Scott Lake Hill (one of only two that we saw all day, likely due to the winds), and in Springbank so Alex could find a New Years Day cache.

We got home only 10 minutes before Allen and Jean.

Dinner was light, leftovers from the previous week, our tea still surprisingly filling. I retreated to the basement to prepare for my Dungeons & Dragons game with my friends, while the others retired for the evening.