Yes, I know it's "Dungeons & Dragons". I chose this spelling intentionally. Deal with it.

I think I played D&D once as a kid with the neighbourhood kids. We ended up LARPing it a bit, as the game was a bit beyond us ... that and I think there was some of that "Dungeons & Dragons is deviant and makes kids evil" crap floating around, so we didn't pursue it any further.

Stupid right-wing morons who really don't understand fantasy and creativity ruin the fun for everyone.

As we tucked into the second month of our pandemic lockdown, I received a message from Chris, still living in Japan, reaching out across the waters of the Pacific and over the many ranges of mountains between us and the coast, looking for anyone interested in spending some time playing Dungeons & Dragons. He reached out largely to those who were a part of the group that used to be known as the Asian Brother Crew (including the Token White Guy, me), though he added a few others, because inclusion is a good thing.

Not everyone signed up, which was absolutely understandable, but there were a few of us who needed -- some of us rather urgently -- to connect with people beyond our work circles and do something completely not work-related. Thus six of us -- Jordon, Teak, Adrian, Calvin, Tamara, and myself -- started our journey into our (online) fantasy. Chris would be our Dungeon Master ("DM"), guiding us through the intracasies of the game, as well as setting all the traps and possibilities for us.

He started us off with an adventure loosely based on The League of Extraordinary Gentlemen, a comic series (that also spawned a movie that starred Sean Connery) about literary figures in/around the Victorian period: Mina Harkness, The Invisible Man, Dr. Jekyll (and his Hyde), the Phantom of the Opera, and the Bride of Frankenstein. The single outlier for the characters was Egg Shen, the Chinese bus driver-cum-wizard from John Carpenter's Big Trouble In Little China, a favourite of Chris', whom I claimed before anyone else could speak up. 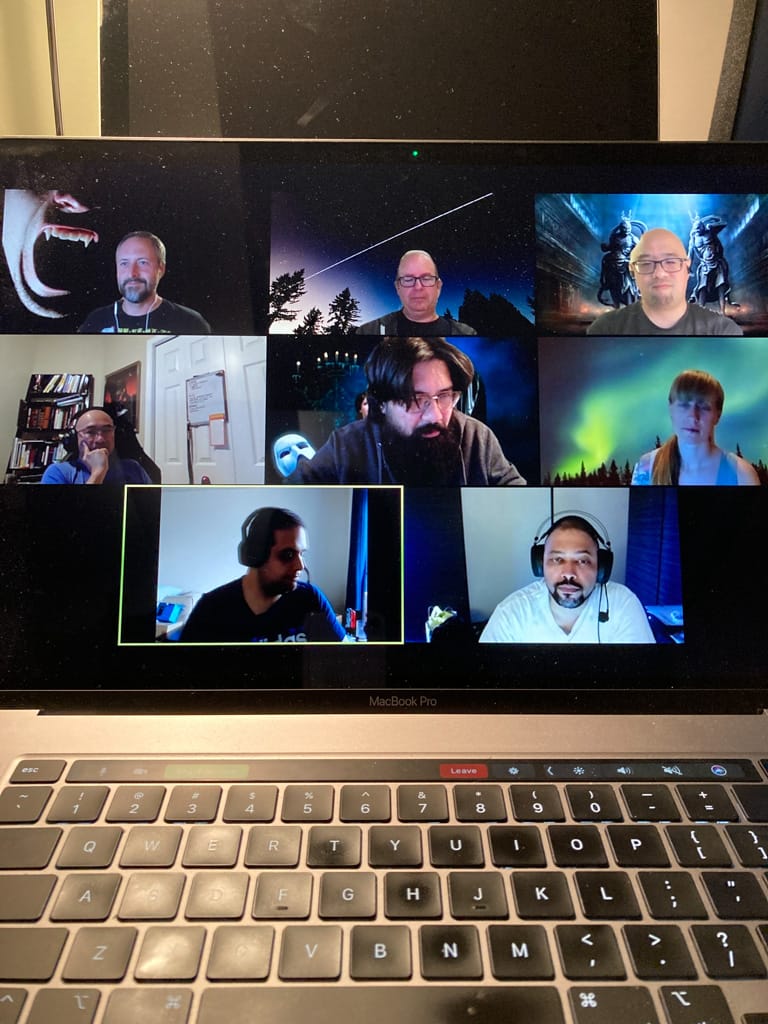 Our games were almost less about fantasy and adventure than they were about seeing old friends (all but one of us are ex-Critical Mass ... Jordon still works there), with which comes an inordinate amount of in-jokes, insults, and inane banter, which made the 3-5 hours we'd play every two weeks seem to drift by as we continued to laugh and have fun.

For me, it was nostalgia. These were the people I had met within the first few months of arriving in Calgary. Jordon was the first recipient of the CMVP; I was the third. Tamara and I were roommates for two years. Teak knows freaking everyone. We all yelled at Adrian. Calvin "The Grease King" always pushed for a certain level of chaos. And Chris played his cards, unseen, thousands of kilometres away, simultaneously trying to push us forward and kill us all at the same time.

We played a single campaign with the League characters before Chris pushed us to start characters anew. Most of the others took to this with gusto, most of them buying the requisite dice (4-, 6-, 8-, 10-, 12- and 20-sided) ... I stuck with an app on my phone. Some of them even bought the hard copies of the manuals ... I stuck with the PDFs (besides, they're easier to search).

But in the depths of the pandemic, into which D&D was shining a dim light for our sanity, all of us created horrible, terrible, and traumatic backstories for our characters. My character, for example, is a tiefling (think "demon" or "devil", without the inherent evil component) who was captured and raised by humans, abused (castrated, one horn sawn off), who only ever heard the word "That" used to address it. Other characters were born in Darkness, had horrific experiences and injuries from war, or (still to date) unknown experiences that have forged significant characteristics that are still being unveiled over a year later.

Thus Chris came to call our little band of misanthopy: "Hearts of Darkness". (Yes, obvious nod to Joseph Conrad and Apocalypse Now.) We were assembled as a new group of "arbiters" working for a company called "Grimm & Grimm" (yes, obvious nods to both the fairytales, and the fact that all our characters are broken).

But it got dark. Fast. Too dark, at least for me. I sunk into my character, who was sullen and withdrawn, who had lived as a street urchin, alone and forgotten. It seemed like a great idea at the time and totally reflected my reality, but holy crap that was a really bad move for someone who was already sullen and withdrawn and felt alone and forgotten. I think the darkness eventually became too much for Tamara, who decided to back out and ceased playing. I nearly did the same, myself, not the least of which was "losing" one of our friends.

Two things happened in fairly quick succession. First, we found a new player, an old friend of Teak's who lived in Vancouver and was as much a geek as the rest of us. Lara didn't know anyone but Teak when we started, but she very quickly fit in with the rest of us nerds. The second thing was that we finished the short "campaign" (meant to be a celebration that went sideways) and our characters returned to headquarters, and Chris gave us an option: tweak the characters. 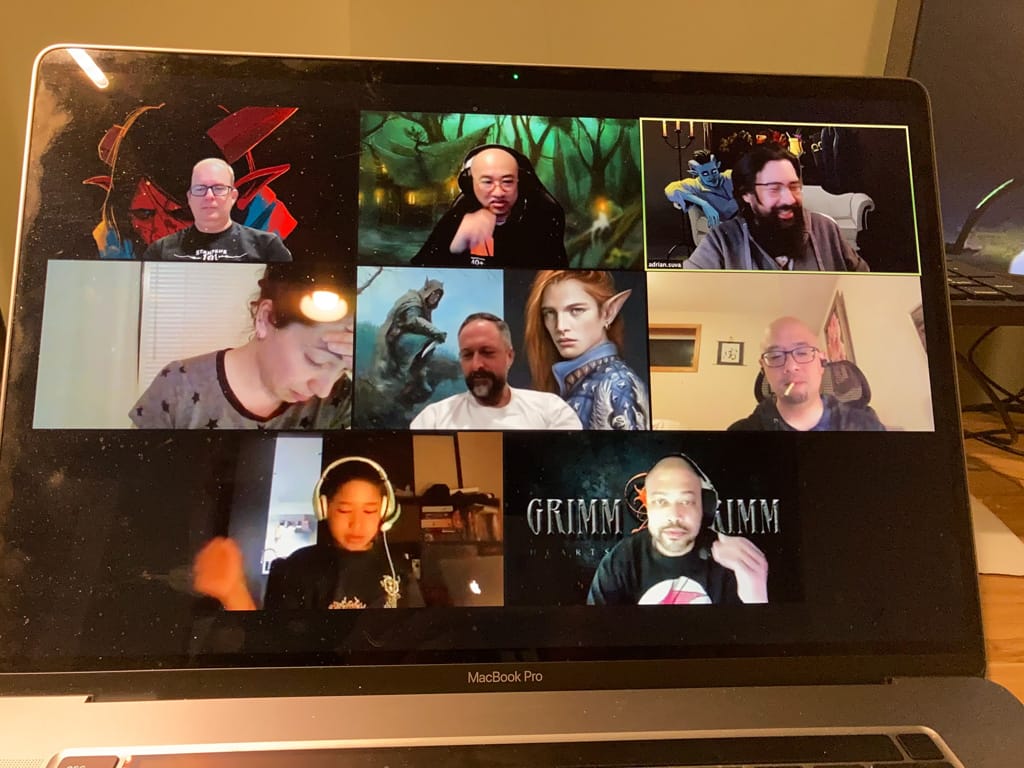 Whether Chris had recognized that things were a little too dark, or whether someone told him, I don't know. But it was the best thing possible, especially for me: thus That had a moment at a crossroads, lost some of his intelligence in favour of strength. His personally changed, too: less moody, and spent more of his time always hungry; he has a thing for salted alligator. And he went from being the last in the room to often one of the first to strike, though that has led him a couple of times to nearly dying.

One thing that's really kept us going, actually, is Chris. What all he gets out of us acting like indecisive delinquents, I'm not sure, but without him as our DM, this likely wouldn't have lasted nearly as long. Not only does Chris set up a good story, he leaves easter eggs all over the place (and I should point out that not all easter eggs are good -- here be monsters) and rolls with the aforementioned randomness. He creates interesting NPCs that we engage with (re: the aforemented alligator) and makes it just hard enough that the possibility of one (or more) of our characters kicking the bucket is always present.

We're heading towards two years of playing and I look forward to our sessions of mayhem. Our from-scratch characters just crossed into the 5th level (despite having botched a supposed "scouting" mission, turning it into a "massacre" due to the aforementioned mayhem and chaos).

When I was a kid, I never thought I'd play D&D. It wasn't "for me". (What did I do as a kid? I read encyclopedias and taught myself to program BASIC.) But I enjoy the comradery with old friends, doing silly things. But if you can't be silly with friends, you have some problems to solve.