I met my friend Nancy when I first joined Critical Mass in April 2000. She was my first project manager, as we slugged away at the Proctor & Gamble Presiva project (it’s a fringe product that thankfully died out about eight or nine years ago). We reunited on the Mercedes-Benz USA project, where we continued to do battle with the forces of ... uh ... weird client requests? Sure, let’s go with that.

Nancy (wisely) left the digital agency world over a decade ago, and went off to start her own business, using horses to teach leaders how to be effective. It was a novel approach, and it’s done well. One advantage of her doing that was moving out into the country (after all, that many horses do not do well in city limits). Which means she started to make good contacts with her neighbours.

Including one that raised sheep.

I have a bit of a shepherding fantasy. (Maybe it’s years of Agency Life™ and marketing?) I would love to live in a pastoral landscape (preferably England, away from Alberta’s harsh winters), and raise sheep. I know it’s stupid hard work (I’ve followed @herdyshepard1 for years, and read The Shepherd’s Life, so I have no allusions), but it just seems more rewarding at times.

Anyway, as either a result or a strange coincidence, I love lamb. (And mutton, but the latter is really hard to get.) So when Nancy cast her social media net to see if anyone was interested in wholesale lamb, I just couldn’t refuse. (Besides, Monkey and Choo Choo have a thing for lamb stew, which we haven’t had in forever...) She put me in touch with her (now former) neighbour Lorraine, who lives out near Hanna, and raises lots of sheep. It didn’t take long to come to a deal, which led to this morning’s adventure.

Very few ranchers (or shepherdesses) slaughter and package their animals; it’s usually done by "packers": companies that prepare the animals, either directly into packaging for stores, or into larger segments for further butchering in supermarkets. Lorraine is no different, and used a packer in Drumheller. And that meant...

I normally try to sleep in on weekends. It’s the only time I manage to chip away at the sleep deprivation that’s been accumulating for a decade. But I couldn’t sleep, anyway. The thought of leaving early to drive out into the prairies was enough excitement to give me a very restless night.

Coffee in hand, I hit the road for 7am, at a balmy -17C. The temperature had plummeted overnight, and frost clung to nearly everything for dear life. (My windows didn’t fully clear until I was in Airdrie, some 25 minutes away.) The sky was black, the roads were lightly populated. By the time I got past the airport, the highway traffic was also thinning out. Cars were spaced by hundreds of metres when I left Highway 2 for Highway 72 just south of Crossfield. I can count the number of cars I passed on my way to Beiseker on my hands.

Almost immediately, I had a rush of a old memory, driving off the very beaten path, and going into the wide expanse of largely flat land, where horizons are used to judge the accuracy of bubble levels. Back in 2001, I started making regular jaunts into the Alberta heartland to help work on a steam locomotive. Nearly every weekend, three hours out, a full day of sledgehammers, pry bars, and soot, then three hours back while trying not to fall asleep at the wheel. A girlfriend derailed my train excursions, and two daughters pulled up my rails. As I looked down the cold road ahead of me this morning, an old smile found its way back out.

There is something about watching the sun rise over the prairies. It’s slow, exposing the plains with their little deformations, bringing the sky from black to purple to dark blue. Then the sun plays with the horizon, two partners toying with a limited palette to create a brilliant orange-red hue. 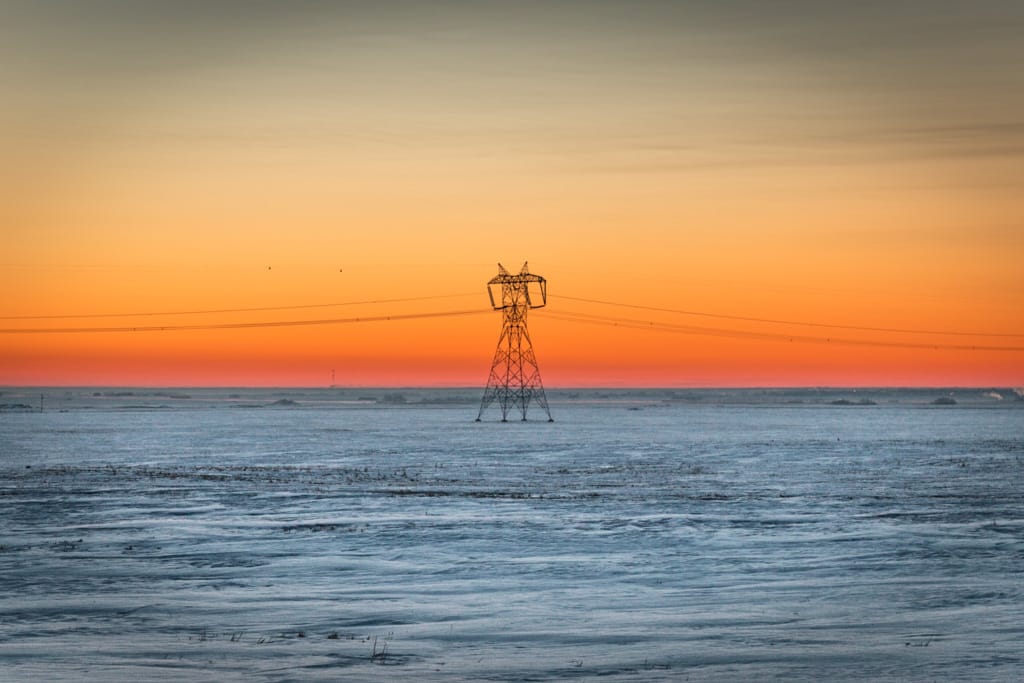 The light grows impossibly slow, taunting the watcher to believe that the sun will never actually crest the lip of the Earth. This morning, one could even believe that it was the extreme cold (-26C, by the time I got to Beiseker) that slowed the sun’s progress.

As I crossed over the long-abandoned CP line in Beiseker, I spied the grain elevator that sits just to the north of Highway 72 at the junction with Highway 9. It’s a more modern elevator, so doesn’t warrant much interest for me (I much prefer the older styles). However, as I looked towards it, my eyes caught a trio of bright lights just beyond ... along the still-active CN line. A rare day, and a particularly fortuitous one for me, that I got to catch a train. 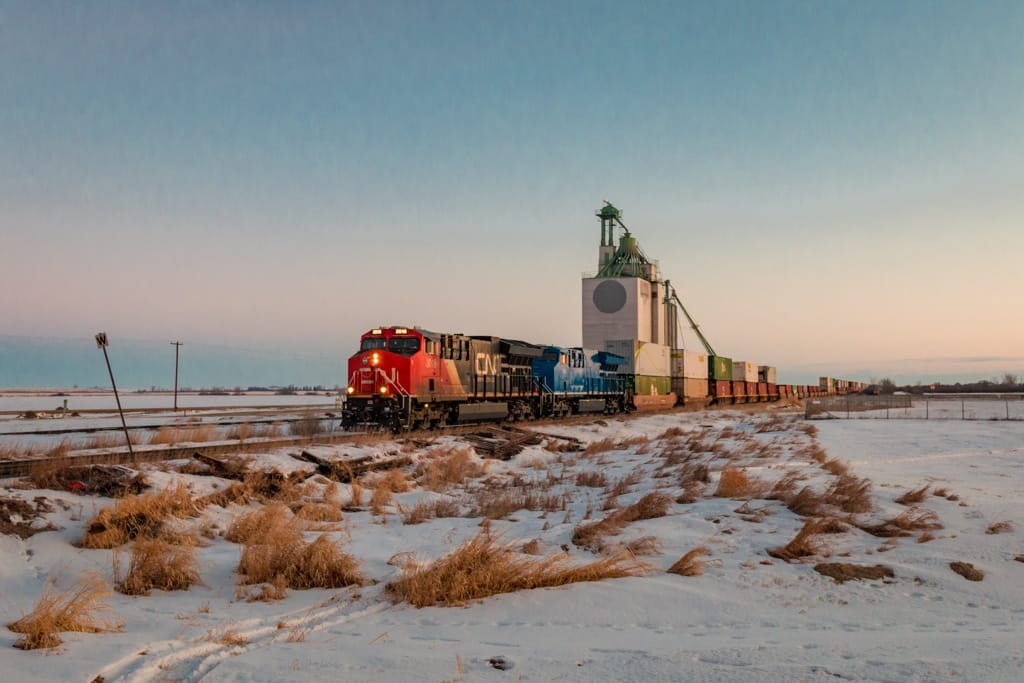 I poured $40 of gas into the car, as I was low enough that getting to Drumheller seemed a little uncertain. Given the frigid temperature, I didn’t want to risk a stall. As I left the station, my eyes were rewarded with the daily miracle of the rising sun.

I would make a few more stops to capture the moment. I know that sounds odd, but how often can you genuinely say that you can watch a sunrise and appreciate it for what it is? Most of us just regard it as the opposite of darkness, and some warmth on a chilly day. It’s like stopping and smelling the flowers, at least to me, to take a moment and watch the spectacle with some of the newness that springs eternal. 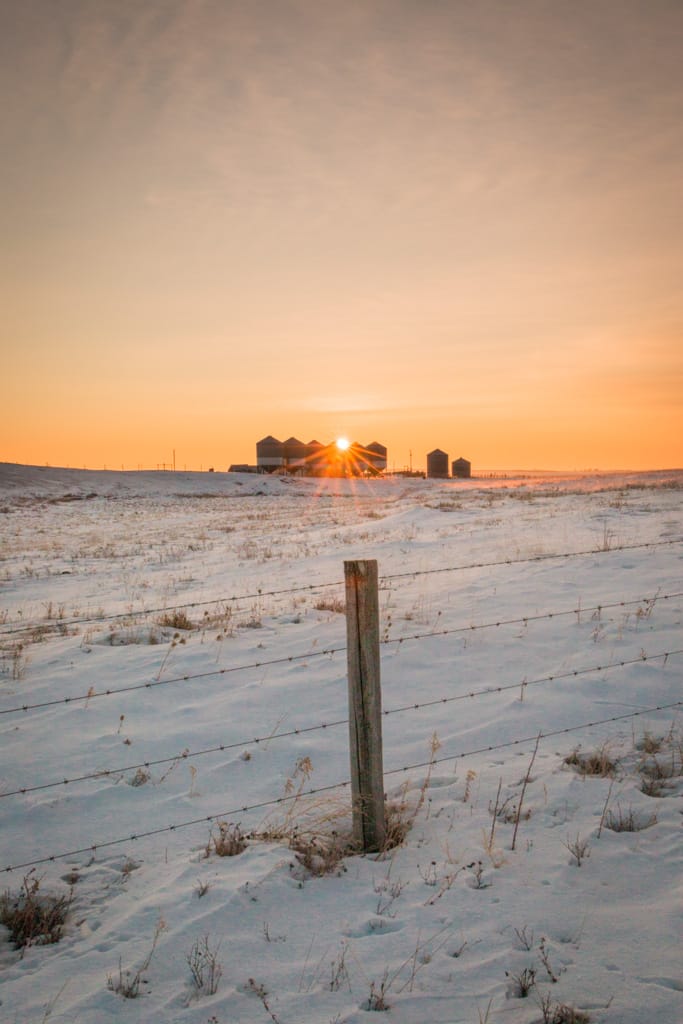 I found Riverside Packers just east of Drumheller, where Lorraine had directed me. It was quiet, and there was only one person working the storefront when I arrived. We engaged in short conversation, starting with that most Canadian of topics: the weather. I paid the fee, loaded up the car, and turned around for home.

I couldn’t help feel just a little sad on the return. I had to be back before noon, the girls were having a tea party for friends, and although I wasn’t actually a part of the party ("Girls only, Daddy!"), it’s a support thing. (I poured the tea. I had to be useful at something.) But I had my camera, I had my pictures, I had my lamb, and for a couple of brief hours, it felt good to be back out on the flat land again. 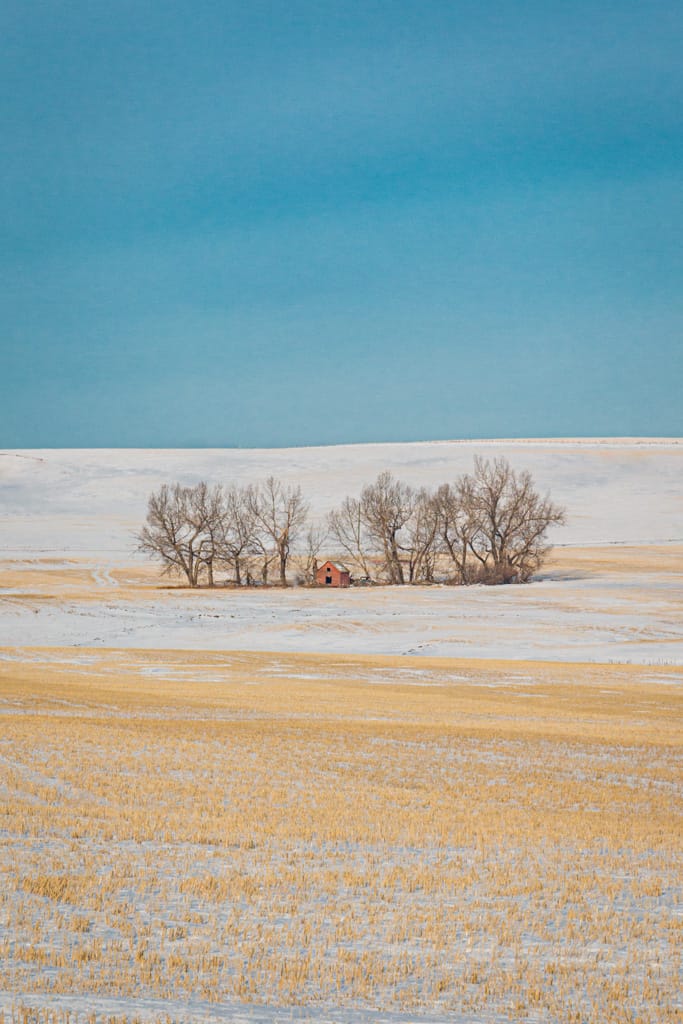