The Art of Animation Resort had left information on our door regarding our DME pickup. We had until 1:30pm to relax, do any final shopping, and pack.

For our final breakfast, we went to Pop Century, to experience their morning fare. I can’t say that the quality was markedly better, but Alex got her gluten-free waffles, and we had something different for a change. So it was far from terrible.

Packing came next, with care to ensure that swim suits could be readily packed away. We’d arrived with a single large bag for all of us, at the top of which was an empty duffel bag for the return trip. On the way back, both were packed to the point of bursting.

We went to the Big Blue pool again for our last swim session. The girls and I did our best to make as big a splash as possible. Alex read and enjoyed our last warm day before returning to the Great White North.

We ate a light lunch as Garrett set up for the day’s pool party. I took the opportunity to thank him for the work he did; I suspected so few people ever did, and I knew how much it meant to us.

That was our cue to change, retrieve our bags from the luggage room, and board our coach to return to Orlando International Airport. Like our previous trip out of Walt Disney World, leaving felt strange, even a bit wrong. The reality of the airport felt almost a bit crushing: the magic was over, the dream was done. It was time to wake up. 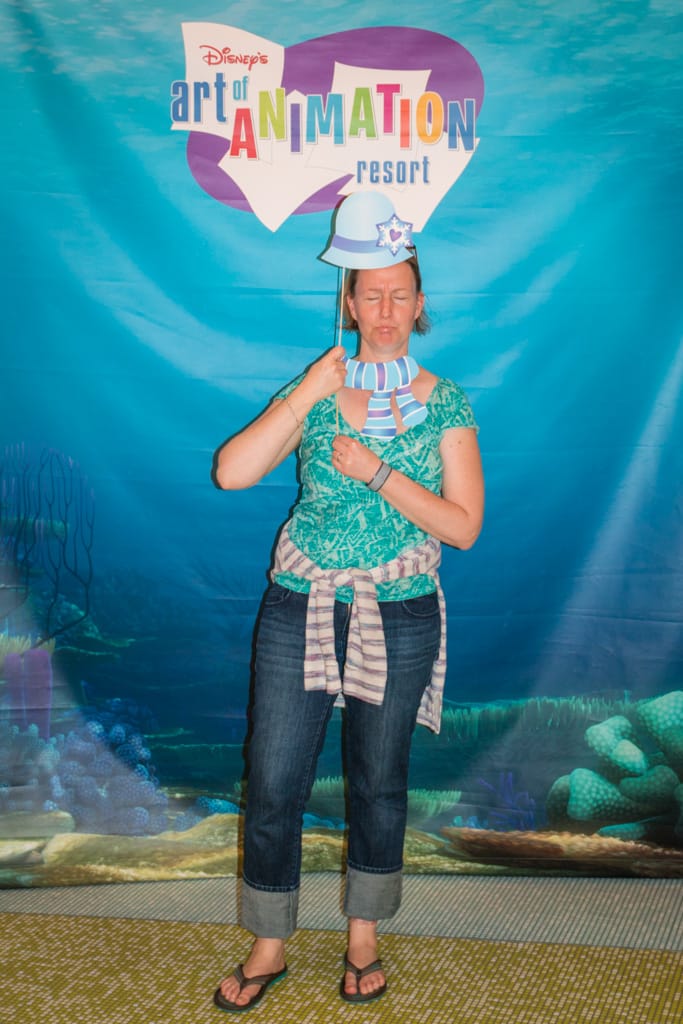 Checking in was painless, as flights for Canadians usually are. Which annoyed us a little, since we didn’t want to be stuck in the airport for three hours with nothing to do.

Worse still, my cold had migrated into my sinuses, and I was feeling genuinely crappy. I just wanted to drug myself up, crawl into bed, and sleep. But that wouldn’t be for many hours to come. We downed coffee and hot chocolate from Starbucks. We looked at the airport’s Disney, Universal Studios, and Kennedy Space Center stores. But all I wanted was drugs.

We found some at a bookstore. Alex wanted them to fly as well, so she wouldn’t have ear trouble. I just hoped it was enough to make my head not feel like someone was trying to inflate a weather balloon inside it.

Security was curiously swift. The tram to our terminal was prompt. We ended up at the same gate that we’d arrived at a week earlier. And we waited.

The plane was late. And that’s when the news came: Calgary was being buried in a snowstorm. A week of Florida warmth and fun was destroyed in mere seconds by the word "snowstorm". My decision to pack my coat in the luggage so I could retrieve the car when we got home seemed the best decision, ever.

Alex’s iPhone continued to refuse to download the WestJet Connect app, so she couldn’t watch movies. The girls ended up using my iPhone, which I wasn’t going to use, anyway, as all I wanted to do was pass out and sleep. Which, as you can guess, I didn’t do.

Both Monkey and Choo Choo tried to look past me, out the window, in hopes of seeing a fast-moving red light. We were mere hours away from Santa’s visit, and they hoped to see him enroute. I was tempted to point out a plane, but thought that maybe that was a bit mean.

Our plane pulled up to one of the furthest gates at Calgary brand-new international terminal, despite many other gates being open. We exited, and started our long walk down to Canadian immigration. This, too, had received an overhaul, taking away the slow-moving line to talk to Immigration officers. Instead, you went to (wait for it...) a kiosk, where you scan passports, fill out a form, and receive a printout. Then you wait in another line, where you meet a pair of Immigration officers who quickly look at the printout, and decide if you need to talk further, or just move on in life.

The bags were already out by the time we got to the carousel. We gathered them, headed to the exit, and I dug out my winter jacket, hat, mitts, and car keys. And off I went down the building, off to the car.

We’d parked in the long term lot at the airport, close enough that it was a quick walk. Despite the dramatic difference in temperature from Florida, I wasn’t too chilly. Which was a good thing, because when I got to the spot where I remembered having parked our Honda CRV, the only thing there was a large pile of snow. A click of the car’s remote made the pile beep and blink. I had some digging to do.

The car was started, the other jackets piled in front the heater on full tilt, and I moved nearly twenty centimeters of snow from the car. Another car drifted by, asking to borrow my brush; the guy had just returned from Mexico.

The car was moderately warm by the time I got back to the terminal. I brought in the somewhat-warmed jackets for Alex and the girls, and we piled into our car for the snowy ride home. We had only an hour until Santa was due to arrive.

The girls were ushered into bed, and the lights on our tree turned on. Alex and I changed into our pajamas ... and went downstairs to finish wrapping presents.