Getting there — well, anyway, really — would be a bit of a challenge for anyone without a car. Even with the distances between entrances (we had a minimum 30 minute walk to the nearest park), there was also the reality of walking on freeways (and very few roads in the area had sidewalks), not to mention the wildlife: signs everywhere warned of snakes and alligators. Walt Disney World is built on a swamp, and many watery channels remain.

Fortunately, Disney thought of that, too: Disney Transport. Originally, that was the parking lot trams, the monorail (MONORAIL!), and the boats. But at some point (and I have no idea when), they introduced busses. A lot of busses. Pretty much an entire city’s worth of busses. I wouldn’t be surprised if Disney Transport runs more busses than Calgary. They come frequently, and they go from everywhere in Walt Disney World to everywhere in Walt Disney World, running every 20 minutes. For free.

The bus from Art of Animation to Disney Springs took about 15 minutes, including the traffic waits (some of the interchanges there are crazy busy). We got offloaded next to a large parking garage, and sent on our way.

We entered into the Town Center, or so it was called, next to a dozen high-end stores that you’d never catch me in (either not my fashion style, or not my price range ... and quite often both). It was, however, beautiful to witness. To our right was a massive (presumably fake, but very Disney-fied) Christmas tree. We passed by it, angling left, past the Welcome Center, where a very helpful Disney Vacations Club cast member informed us that there was, in fact, no playground at Disney Springs. The kids looked forlorn, and the decision to come suddenly seemed a poor one; none of the stores looked kid-friendly in any way.

As we continued down the path, I tried to think of what we’d do. The park days were set: Epcot was the following day, with Animal Kingdom on Thursday, and Magic Kingdom on Friday. These were effectively immoveable, as I’d had to go through considerable effort to reserve restaurants (180 days in advance) and set up FastPasses (60 days in advance), and changing them seemed unwise, bordering on impossible.

Then we were distracted by the Sprinkles shop. Well, not so much the fact that it was a cupcake shop, it was that there was a large pink arrow that drew you to a screen, next to a small door, bearing the letters "ATM". It was a cupcake-dispensing machine. I mean, things that change your life!

And suddenly, things didn’t seem quite so bad.

We crossed a bridge over a manmade lagoon filled with dozens of lanterns. And I immediately wished I could return on my own at night to see how different Disney Springs looked. Maybe one day in the future...

On the other side was a small slice of Ireland, in the form of a couple of restaurants (Cookes of Dublin and Raglan Road), and a small shop. Alex disappeared inside the store, and we followed. It took about a minute before my first "Can I get this?" from the girls. It would be a pattern repeated many, many, many times over the next few days.

Still being a bit too early for lunch, we opted to continue looking around. We double-backed on our route, and wound our way eastward in the complex towards what must be the Spring‘s centrepiece: The World of Disney Store.

If you’ve ever been to a Disney Store in a mall (Calgary’s got three of them!), you have a sense of what it’s like to disconnect a bit from reality. The World of Disney Store is the Alpha of the pack: twenty times larger than any Disney Store I’ve seen, with (nearly) every single Disney product I saw during my time at Walt Disney World.

We lost the girls within seconds.

We lost over an hour in there, discovering that the merchandise arm of Disney is far, far, far more vast than anything I’d previously considered. Choo Choo discovered a Stitch stuffie nearly her own size (and believe me, Choo Choo is big for a six-year old), Megan found an endless array of princess attire, and Alex discovered the Disney pins. 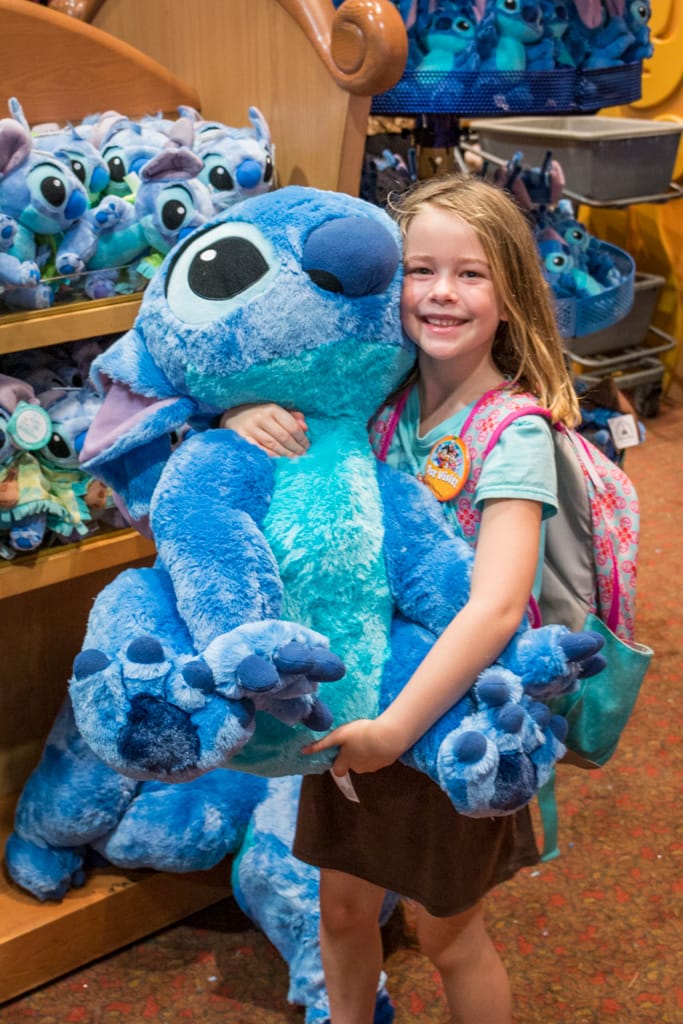 We already knew about the pins, but we really got to see them that day. Not the complete collection, for there are over 60,000 known official variations, but this store contained most of the current ones. It was hard not to walk off without a few. (I collect pins in general, I’m an easy target, really.)

Once we’d reassembled and managed to exit, the next target was supposed to be the LEGO store, but lunch called loudly, and we trucked off in the direction of the Rainforest Cafe (Alex has an affection for them), which is perched inside a fake, fire-spewing volcano across Disney Spring‘s lake. Perhaps not surprisingly, there was a very lengthy wait, which we were not prepared to handle.

Hardest part of travelling is eating. For some, it’s the easiest, but when you travel with an allergy, it’s a challenge. Regardless of the things we were told by our travel agent, ensuring your food is properly prepared can be hit-and-miss. Having missed a chance at the Rainforest Cafe, Alex chose Raglan Road (to which I had no issues), so we wandered back to Wee Ireland and we plopped at a table on the patio in the shade of some large umbrellas. The girls dove into lemonades, Alex into a frozen margarita (if I recall), and I into an overly-delicious Toasted Coconut Porter by Orange Blossom Brewing (followed later by a Guinness Nitro IPA).

Lunch filled us to the brim, between food and drink (including refills and water, given how warm it was). When the bill finally came, it arrived with one of the fancy MagicBand machines. No credit card. Just tap, and a PIN. (The PIN was always used for transactions.) I’ll get more to the MagicBands later...

After lunch, we wandered again, this time to the western end of the complex. We passed over a bridge, and were attracted to the Disney Springs "hot air" balloon. A presumably helium-filled balloon looking more or less exactly like a turn of the 20th century hot air balloon, this was a tethered ride some 150 m off the water for what must have been one heck of a view. But it was closed, due to too-strong winds.

Instead, I was attracted by the familiar horns of the Imperial March, broadcast loudly over speakers. Star Wars: Rogue One had opened two days earlier (I have yet to see it, sadly), and it was being promoted heavily. The music led us right to the Star Wars Galactic Outpost. And of course, I had to look.

It still seems weird that Disney owns Lucasfilm (and Marvel, and The Muppets, and...), but I’ll give them credit: They haven’t made a mess of it. (Let’s not talk about Episode 7, though. I have issues with that movie.) This little store (it was surprisingly small) contained just enough things to make me happy. And it contained Choo Choo’s desired "Mickey Ears".

I first went to Walt Disney World in 1982 or 1983 (I’m not sure the exact year, but it was shortly after EPCOT Center had opened). I still remember the feeling from then, though much of it has faded. Back then, Mickey Ears were little more than a black felted-paper cap with a pair of plastic ears grommeted to the top. Since then, the ears have evolved dramatically, playing off of various characters (pick a princess, there’s ears for them), themes (I saw a lot of bride + groom pairs), and of course, the various properties (my favourite, which you can only get at Hollywood Studios, is a light-up, three-panel Star Wars battle scene). In the Star Wars store, Choo Choo found hers: R2D2. 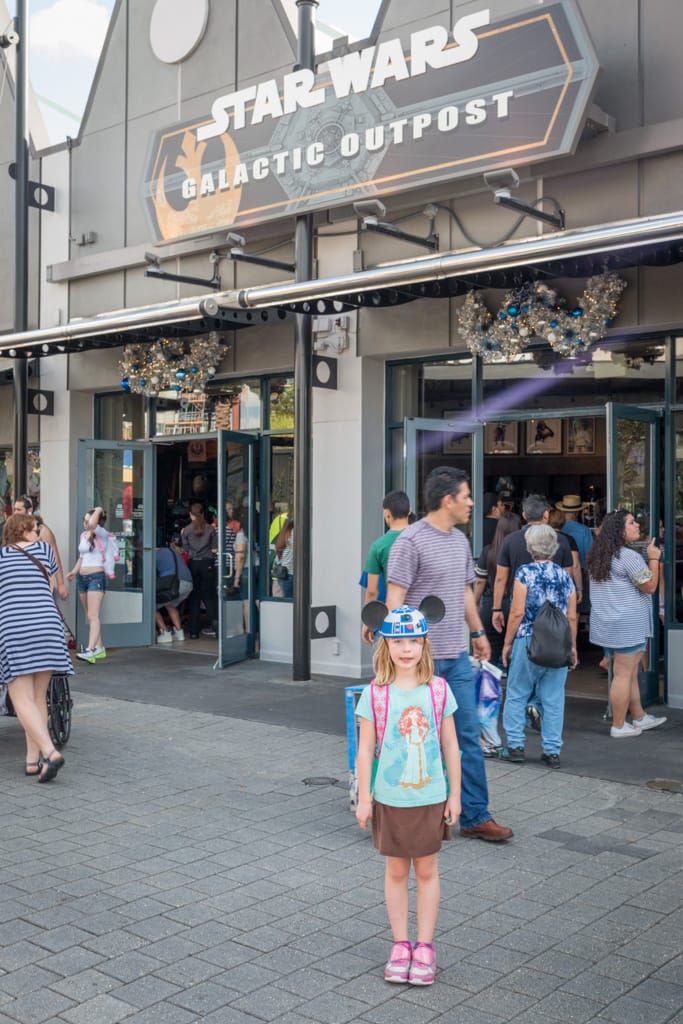 It was at this point that Alex discovered her first mission. At the top corner of the shop was a little cardboard cutout of Stitch, holding something (be darned if I can remember what, exactly). It was very out of place. But people were looking for it, and then running away.

When we asked, we learned that this was an adventure. You got a little book, and then you went around looking for Stitch. You had to find them all, and mark down what Stitch was holding. When you got them all, you got your reward.

It seems trite, I know. But this is exactly the kind of thing Alex loves to do. (She’s a dedicated geocacher, after all.) And the mission thus began for all of us.

We walked all the way to the Cirque du Soliel tent at the far west end, then headed all the way back, rounding around the AMC theatres (I asked about The Muppets at a poor guy who thought I was asking for a map), past the (temporarily closed) Planet Hollywood, through a (new, according to Google Earth) warehouse containing more shops, until we arrived at where we’d entered the complex from the bus earlier.

Alex was still on her mission. So off we went for ice cream at Ghirardelli. Which, I must say, was much-needed. She went in search of something cold and frozen, and preferably alcoholic, though she came back empty-handed. A toy store further down caught our attention, which seemed a different (and smaller) version of the World of Disney Store, but at the far end, I found something I’d been hunting for...

Since starting at the University of Calgary, I’d instituted (at least for myself) "Annoying Shirt Friday", which constituted my Hawaiian shirt collection. Ever since, I’ve been on the hunt for more. I’d found a great Dia de los Muertos shirt in New Orleans in May. And at the back of Once Upon A Toy, I found a Star Wars version, complete with X-wing fighters and explosions. My smile nearly split my head open.

And just down the way, I noticed that there was the Bibbidi Bobbidi Boutique. I had to whisk the girls by for a look-see. Immediately they wanted it. Which was good. Because I already had such plans...

But not that day. Exhaustion was starting to set in. We’d clocked over 10,000 steps already by that point (we’d top out at over 15,000 for the day), and combined with the heat, we were all starting to drop off. We made our way back to the entrance, Alex taking the moments to clean out the rest of her mission while the kids and I trucked towards the bus stop.

This is when we discovered that being at the bottom of the barrel for Disney resorts also puts you at the end of the bus lineup. And there’s no shortcuts to the end: you have to walk allllllll the way around.

The bus ride back was shorter than the one out, and we were quite relieved to be back to our room, and dinner. The girls swam, Alex had a piña colava (a piña colada with a strawberry syrup), and I discovered Cigar City’s Jai Alai IPA (which rocketed quickly into my Top 5 IPA list).