We arrived in Orlando at about 1:00am. Amazingly, the girls were still awake (given, it was only 11pm Calgary time). The airport was nearly empty. And yet, Choo Choo sprinted ahead to see a giant (fake) Christmas tree, and neither complained about the extra walking to retrieve our bag. All I wanted at that point was a bed, but they needed tranquilizer darts.

Our first exposure to Disney came on Level one of "Side B" (Orlando has strange names for their terminal building arrangement), where we arrived for our Disney Magical Express. I was half-expecting it to be closed. But there was a nice gentleman, who smiled and said "Good morning!" as if it were breakfast time, but with enough levity to suggest his apology for the late hour. We were directed to Line 7 (devoid of anyone), and led to a large coach bus. There was no extra cost, no hassle: it was simple. This was a pattern that was about to be repeated frequently.

As we took our seats, the kids’ attention was immediately drawn to the TVs above featuring DME TV, a video reel about the adventures we were about to have. As we pulled out, we even got a safety briefing from the video. Though seemingly overdone, the videos at least covered Disney’s arse for liability, and then tried to help us as much as possible for our imminent arrival at the hotel.

Thankfully, our hotel was the first on the loop: Disney’s Art of Animation Resort. As we arrived, we were greeted with a massive, colourfully-lit sign bearing the resort’s name. We wound through the massive parking lot, the road designed to weave just enough to seem wanderly, and emptied right at the front of the building.

As we entered the lobby, my jaw dropped. The long room ran in a pair of unmatched curves, the right side bearing massive reproductions of development sketches from the four movies featured at the resort: Cars, Finding Nemo, The Lion King, and The Little Mermaid. Along the left were the desks for registration and concierge, lit by a swooping set of lit coloured panels that graduated through several shades of colour.

Check-in was when we received our MagicBands. If you live in the United States, you receive this in advance of your visit; outside of the States, you have to pick them up when you arrive. These were our keys ... to everything. The MagicBand is how Disney knows you’re you. They open your hotel room, they’re your passes to the parks, they give you your FastPass to rides, and it fronts your credit card at restaurants, stores, stands, and apparently even the biggest taxi company in Orlando (Disney-owned, of course).

The walk to Building 7 was another experience. As we left Animation Hall, we were immediately met with the massive Big Blue pool, overlooked by Crush and Mr. Ray from Finding Nemo. We turned to the left and walked through The Lion King buildings. We were met with Rafiki, then Musafa atop Pride Rock. Further down were Timon, Pumbaa, and little Simba perched atop a massive fallen tree between the two buildings. Past that, the elephant bones that frightened little Simba so badly in the film were overlooked by the hyenas; a little tunnel under the massive skull glowed red. Zazu bade us farewell as we past, heading to The Little Mermaid buildings. 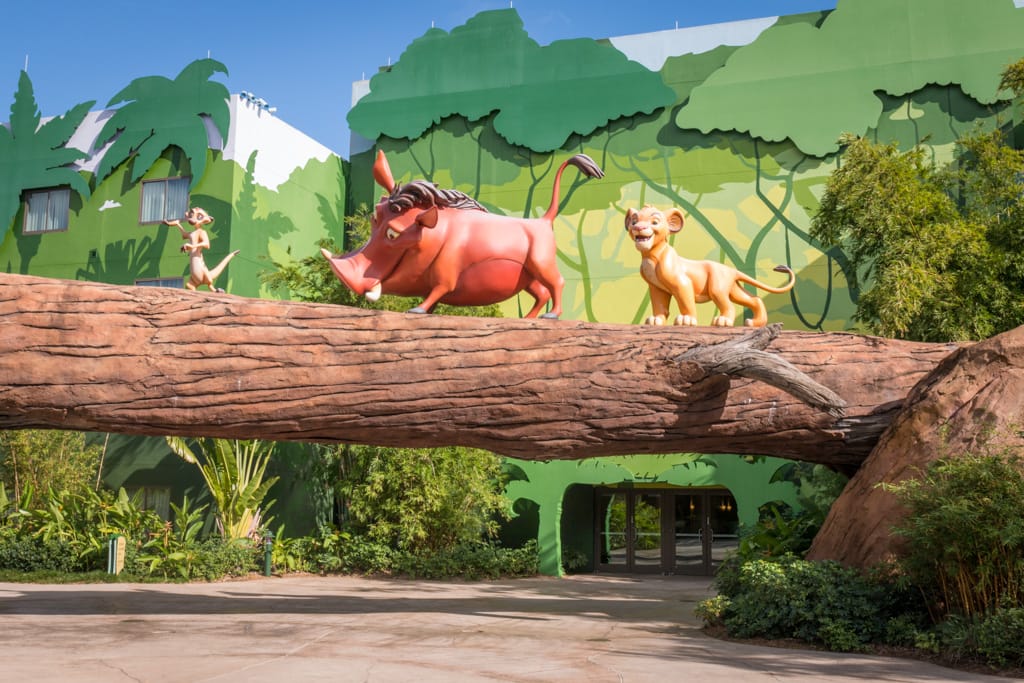 I have little girls, of course we stayed in Ariel’s room...

Along the path, lit as if by lanterns on posts, we found giant versions of the dinglehopper (the fork, complete with its bent tine), the snarfblatt (a pipe), a treasure chest, and a large stein before coming to Eric’s statue. The path divided to the left, to King Triton, and to Ursula on the right, beckoning us closer. At over four storeys tall, passing by her on a regular basis was a bit eerie. 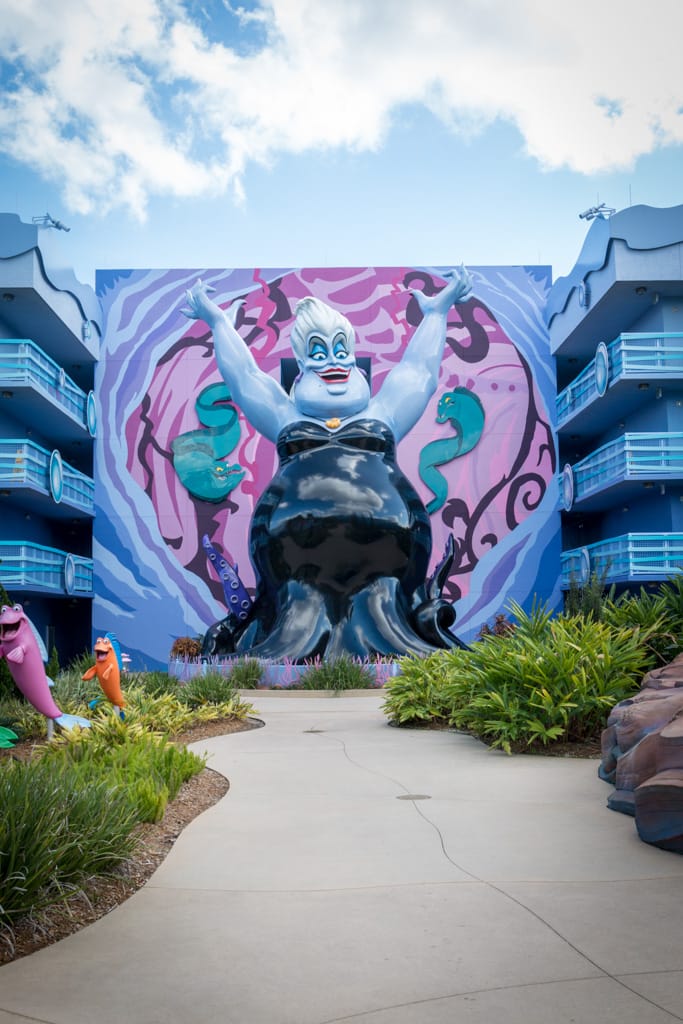 We entered our room around 2:15am. All four of us were wired between exhausted and excited. We did little more than pull out pajamas, brush teeth, and climb into bed.

We woke around 10:30am. I was stunned that we’d not heard any of our neighbours, as you so often do in hotels. We dressed, sunscreened, and headed out for food.

The Animation Hall contains the front desk, a Disney store (because, of course) called The Ink & Paint Shop, and the "Landscape of Flavors": their cafeteria. Yes, a cafeteria. As nice as Art of Animation looks, it’s the lowest end of Disney’s resorts. There’s no full-service restaurant. Disney’s no fool: there are 1,984 rooms at the resort. If all of them had four people, that’s nearly 8,000 people who need to be fed. And let me tell you, some days at breakfast felt exactly like all 8,000 were there.

The food was surprisingly good (we would later come to loathe the lack of variety), and enough to move us on into the rest of our day: swimming. The rest of the 17th was a complete slack day, an intentional rest day given our travel the day before, to adjust to the timezone, and because the girls love swimming. Honestly, the relaxing was a good thing.

We focused on what Art of Animation calls the Big Blue pool, the largest of three pools, and the one that features underwater speakers. The pool had no diving, but offered considerable jumping and splashing, and was ringed by no less than five lifeguards, two of home were "pacers" who could not be stopped for any reason in executing their pacing/watching detail. I mean, I’ve seen many lifeguards in my day, but never any that dedicated. 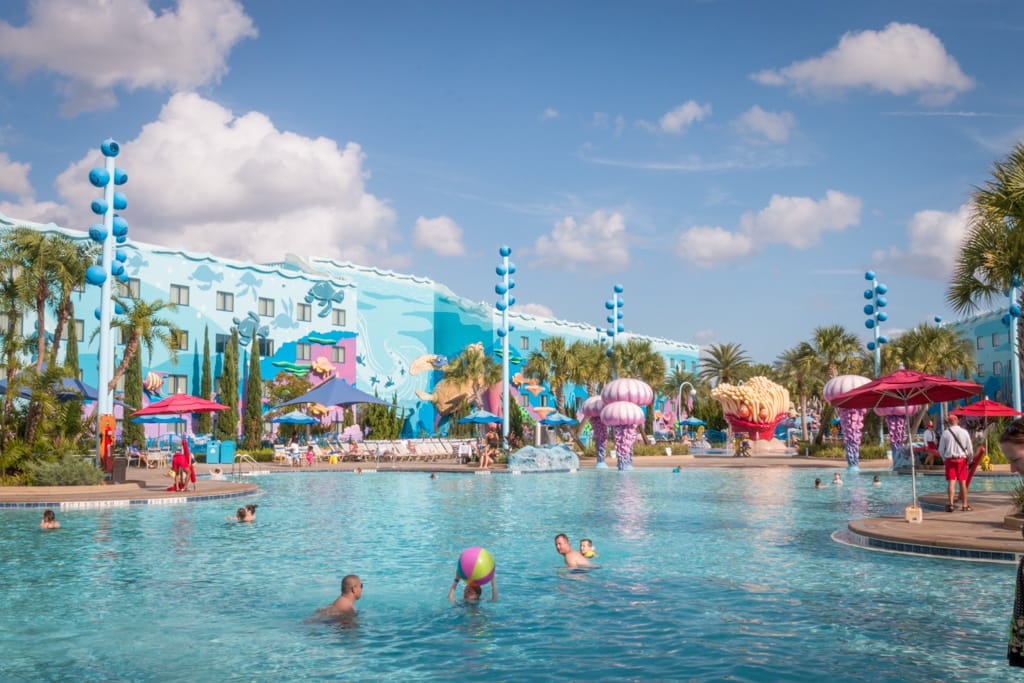 Around 1pm came another treat, as a man by the name of Garrett stepped up with a microphone, and started the near-daily pool party: a series of games and activities for the kids that would keep them interested (and parents suitably relaxed) for most of the afternoon. We would see Garrett and his team a few times during our stay.

It was this day we found out that Disney likes to surprise whenever they can. At the ends of the Finding Nemo buildings facing the Animation Hall are massive pier pilings, topped by the seagulls in the movie. Every 15 minutes, like Westminster chimes, they would cry out "Mine! Mine! Mine! Mine!". 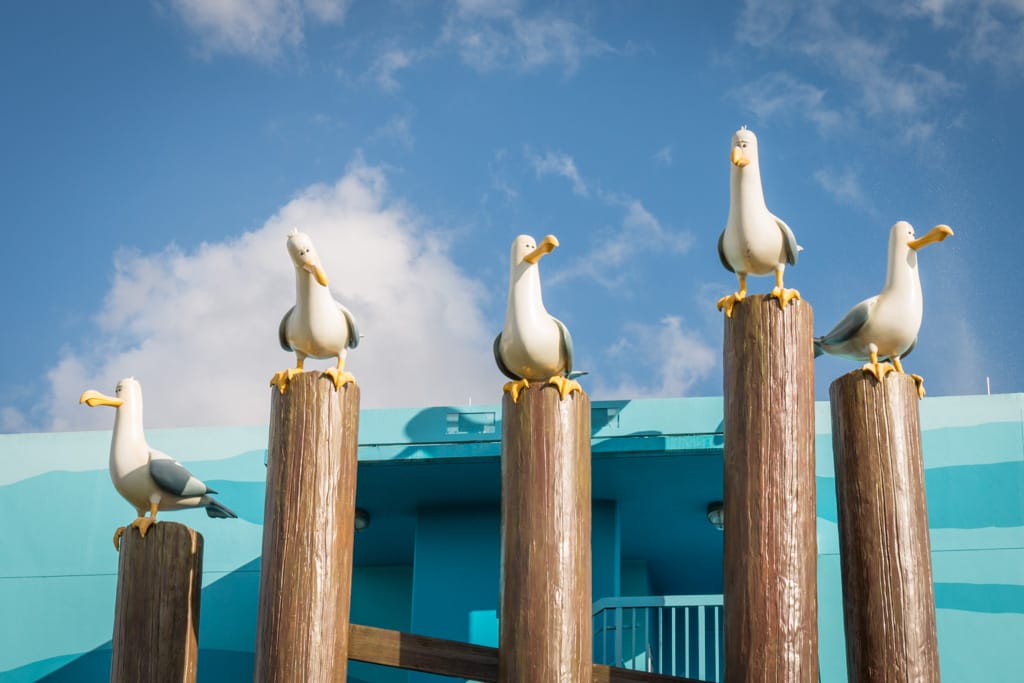 That day, we also find out that the resort offers outdoor evening movies most nights, complete with popcorn. That night? The Nightmare Before Christmas. Monkey had her hand clapped over my mouth to keep me from singing every line.