Like, seven. I’m having trouble really saying that. It’s just weird that you’re so much older than I always feel like you should be. You’re growing up a little more every day, and flit between my little girl and ... well, kind of an evil genius, really.

And truly, both are awesome.

Okay, so let’s start with the obvious: Your birthday was two days ago, not today. We were all in Banff, enjoying ourselves. And by "we", I am, of course, referring to the entire troupe: Mommy, you, Choo Choo, and myself, plus Auntie Cathy and Uncle Craig and your cousins, plus Nana and Auntie B. That was Auntie Cathy’s idea. Going up a mountain? That was Uncle Craig’s...

So let me throw you my little perspective on this one.

First off, neither you nor Choo Choo nor your cousins objected. Only Mommy did, and that was largely because Mommy wasn’t feeling terribly well. That left the rest of us (save for Nana and Auntie B, of course) to tackle the mountain. Sulphur Mountain, to be exact.

That hike, by the way, is 5.5 km straight-line distance, running about 700 m straight-up. It’s not a tough climb, per se, but let’s remember that you young’uns are topping out at eight years old, and Choo Choo’s barely four and a half. (Never mind Uncle Craig, Auntie Cathy, and I, who are far from being spring chickens, with the latter two of us having office jobs and not being in very good shape.)

Following a hearty (and filling) breakfast at Melissa’s across from our hotel, we drove up to the main parking lot, unloaded, and proceeded to start our climb. (Well, after Choo Choo *had *to stop to pick up a rock. She loves rocks. I don’t know why. But she wanted to carry a rock.)

I will give you all massive amounts of credit for the fact that none of you said a thing for the first few switchbacks. (If anything, it was the grown-ups telling you to slow down and pace yourselves.) You were having fun, even enjoying it. I was worried we’d hear "can we go back now?" after only a few bends. 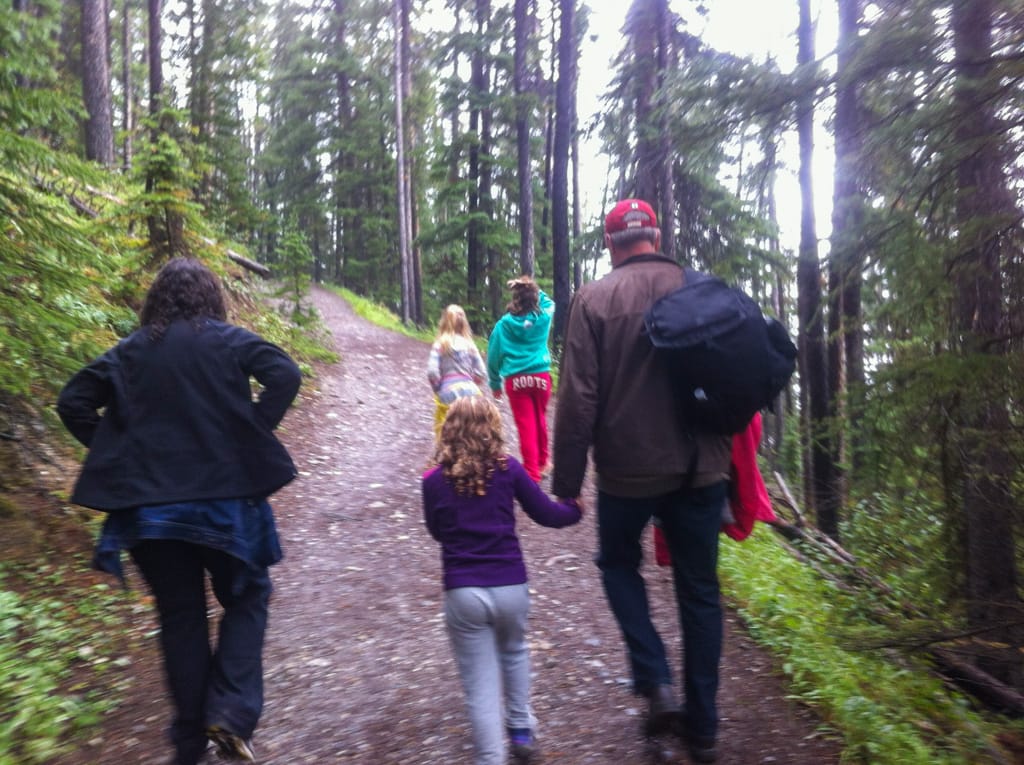 In fact, I don’t recall any of you suggesting we head back. Of course, it could be that you were all pre-empted by us saying where we were on the trail, looking at how far you’ve come, keeping you moving, and so forth. But you did have your moments — you especially, Monkey — where you were pretty much done, and didn’t want to go another step. But, of course, we gave you no real option, either: you were almost at the top, and going back down was rather pointless.

Still, at just over 90 minutes from starting, we all arrived at the top of a mountain. Which hugely impresses me. That’s not a quick hike for adults, let alone kids, and yet you did it pretty darned fast! And on your birthday!

So, no, I’m not going to make you climb a mountain on your birthdays, though cool this was. With luck, however, this will end up being the start of a better trail habit for all of us. And maybe — just maybe — you’ll like hiking a bit better.