By tradition, our family does afternoon (or high) tea on 1 January, and thus far it has always been at a Fairmont hotel (which, frankly, does excellent afternoon tea). This year, almost exactly one year ago today, we had our tea as planned. But last week, we came to the realization that we could not effectively hold to our traditional date, as Alex has an evening shift, and getting back from Banff in time was nigh-impossible without rushing.

Local? The Palliser doesn’t start until 2pm, which makes rushing just as much a problem. And no-one else in Calgary seems to be open on New Years Day. For afternoon tea, that is.

And it wasn’t for a lack of looking. I even went to my internet compatriots for suggestions. I got the name of nearly every tea house in Calgary, but no others that served afternoon tea. It seems harder than it should be...

By the time we arrived in Banff, the temperature had risen to a mere half a degree below zero (not an uncommon thing). Traffic was light, bordering on non-existent, and it was an easy trip up to the Upper Hot Springs. For the first time in probably over a decade, the spring was gushing hot water, rather than the usual trickle we’ve normally seen. Likely a result of the torrential rains we experienced last June, and a heavier snowpack, the springs are once again dependent on natural sources.

We arrived in the pool barely 30 minutes after the pool opened for the day, which meant it was much emptier than I’ve experienced in more recent visits. It also meant the girls needed only admonishing for splashing, rather than having to pull them out of the pool entirely for annoying everyone.

Bathed and dressed, we headed to the Banff Springs, where Alex and Choo Choo went to get our noon table, while Monkey and I parked the car. Our table was window-side, which I’d hoped for, allowing us a wonderful view down the Bow River valley.

Now, the hard part with doing afternoon tea, or any relatively nice outing that involves manners, with young children is allowing them to act their age, with restraint. Monkey has some difficulty, but generally understands; Choo Choo, on the other hand, is a bit of a handful. Alex and I have to sit opposite each other so we can properly tag-team.

That said, the girls did surprisingly well. They didn’t go so much for some of the fancier desserts (Monkey, inexplicably, refused to eat the multilayer chocolate cake slice on her plate), they ate without disaster, and drank almost with their pinkies out. But as one might expect, patience has its limits, and they couldn’t sit still forever. 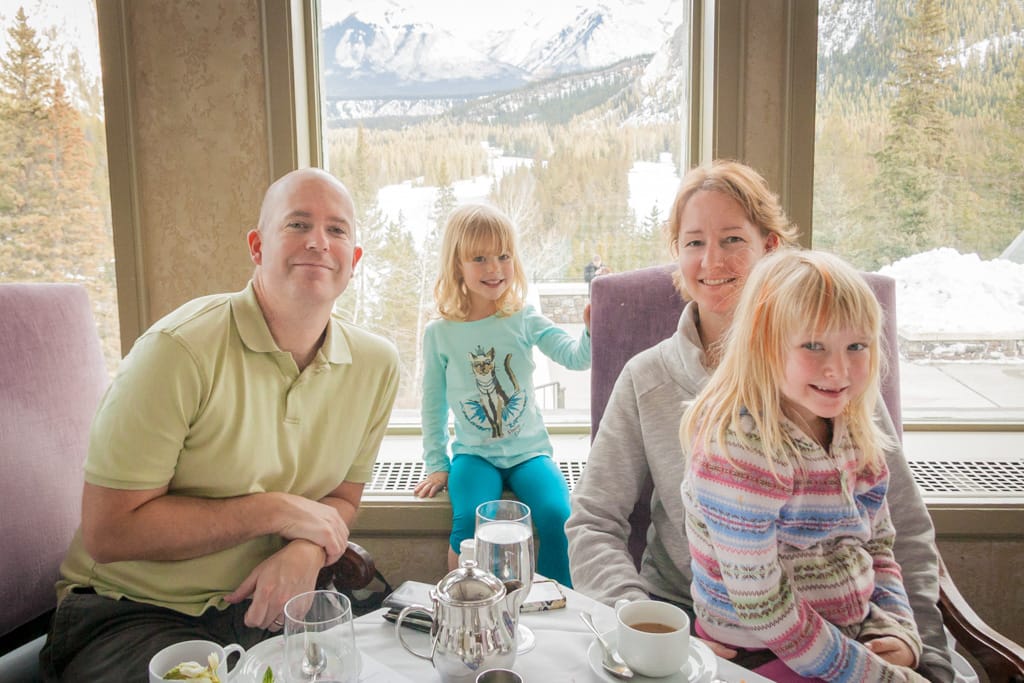 We zipped down to Bow Falls, which was frozen save for a two metre-wide gush of whitewater. The rest of the river was partially open, though heavily ensconced in thick ice, a point that was made to us while watching five people rather lacking on common sense, who got very close to the river’s edge without the ice breaking. We had our phones prepped for 911, just in case. The girls made "ice cream" from rocks, sand, and pine cones on a low rock wall.

We tried to walk about town. We honestly thought we could spend a couple of leisurely hours wandering about, window shopping and otherwise sight-seeing. The girls, however, were done. Beyond done. That was clear after the first shop (a toy store, which may have aggravated the issue), and the parental patience ran thin, quickly. We were on the road by 4pm, the girls sound asleep before we were out of the Banff townsite limits.

Next year — which is tomorrow, lest we forget — we have the same issue with Alex’s work schedule. We’ll likely do the same trip. And hopefully next year, we won’t wear ourselves out so quickly.