They say that when you put enough people in close proximity for long periods of time, their biological rhythms come into synchronicity. People start thinking the same, they pick up each other’s habits and nervous ticks ... and of course catch each other’s colds. And ... uh ... we all got terribly, terribly ill and declared to everyone that we weren’t able to work for the day. Planned a couple of weeks in advance. In unison.

Okay, yes, we all played hookie. We had a good reason. We’re helping out Mt. Norquay with some of their marketing needs. And who are we to pass up an opportunity to experience our client’s business while taking a much-needed day off to go skiing?

Though ... is it worth mentioning that I haven’t been near a ski hill in about 25 years?

I met Allard just after 7:00 on the east side of 69th St., and from there we went to pick up Bill, followed very shortly after by breakfast for 35 from Tim Horton’s. Allard’s declaration to arrive at Canada Olympic Park (now officially known as WinSport), where we met with everyone else, boarded our bus, and hit the road into a foggy morning. 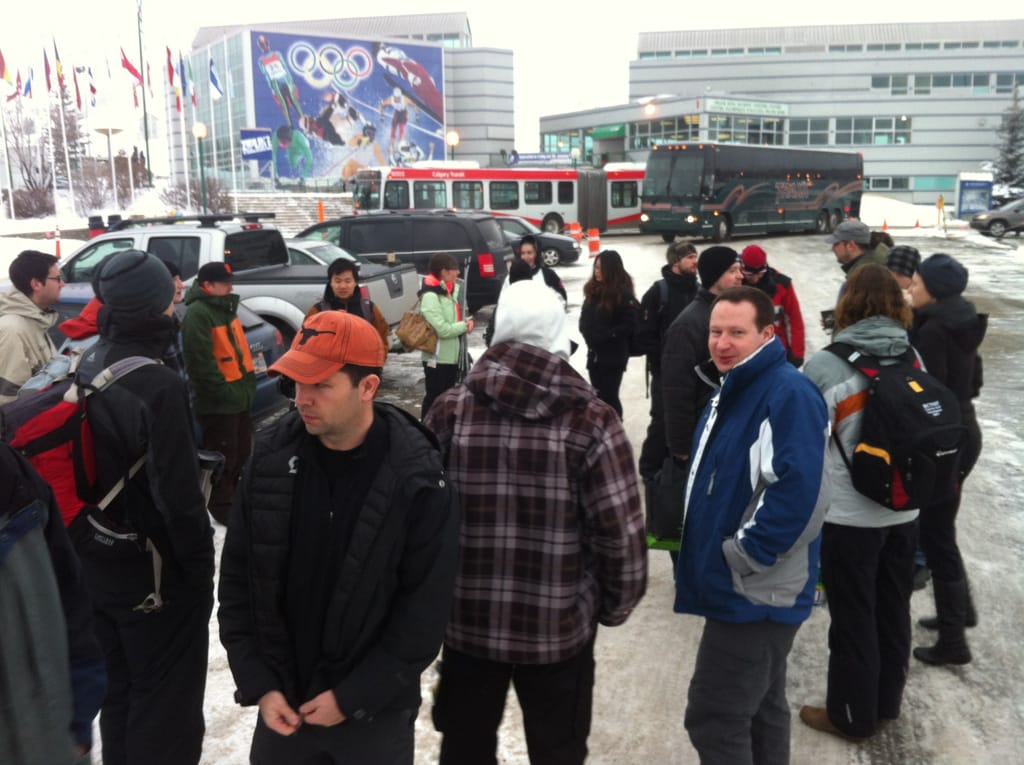 It was the first time I’d ever turned north off the Trans Canada at Mt. Norquay Road — I’d always gone south into Banff Townsite. And a slow, winding route up the side of the mountain brought us to a near-empty parking lot.

This, incidentally, is the reason we went on a Wednesday: mid-week attendance is low (a common problem at ski resorts, so I gather). This allowed us to have a room to ourselves, easy access to the runs (not a single line-up), and gloriously quiet. It also allowed us to get rentals quickly (Norquay does a brilliant job of group events, I have to say). Well, those of us who needed rentals — there were several people who were already on the hills before I’d even managed to figure out where the rentals were to be found.

I’d not worn ski boots in ... well, a long time. The last time I’d worn them, flipped-up collars were still cool, and neon clothing was considered fashionable. Ski boots, from what I can recall, weren’t that hard to get on, and I have some vague memory that they were about as tight as a slightly-small pair of ice skates. ‘Course, that could be just the fact that I was 15 (do the math, folks) and a lot more supple than I am now. I broke a sweat just trying to get my foot in the first boot. I needed help to get the buckles done up. 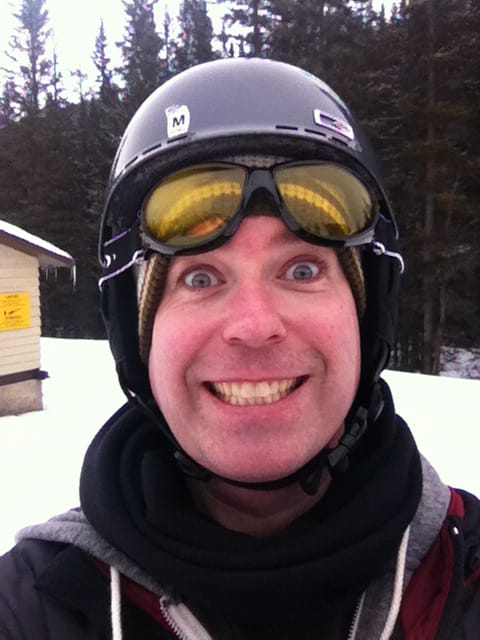 We soon found our instructors (there seven of us — four going for snowboarding, and three of us for skiing), and went off to ... the bunny hill. This was at the bottom of the much-larger hills behind us, the first time that I’d ever seen "alpine" ski runs. They were big. Like, scary big.

Oh, yeah, I should also mention that I was actually more than a little scared going skiing again. Age aside, I remembered very well that the last time I’d skied I still had big trouble with control. I couldn’t turn to the right and my ability to stop was horrid (so bad, in fact, that I’d had to wipe out to slow down ... I broke the ski, and thankfully not myself). Many years later, on a much bigger hill, I started to wonder if this was such a wise idea...

Life is not lived if you never try. (Right?) So I joined Eric (who’d not skiied before) and Kirk (a 25-year snowboard veteran who wanted to try something different) with our Japanese instructor (honestly, it just sounds funny — she was fantastic), and re-learned what I’d supposedly learned all those years before.

It took a lot more effort than I thought it would. The hardest part was realizing that the ski was — shockingly — slippery. I’m still amazed that I didn’t fall over. Thankfully, I took poles, which were helpful, if not a bit of a crutch. They helped me move, and stay stable enough to get on the crazy carpet (basically, a conveyor belt to take us up the bunny hill) and get off at the top.

The hardest part was the stance. You have to stand just so on skis so you can turn and stop yourself. Or, as is my history, lose control and careen into Very Bad Things™. And there are a lot more trees on Mount Norquay than there are on the hills in Ontario, lemme tell ya.

After about five passes on the bunny hill, Kirk graduated to the real hill, while Eric and I kept doing bunny hill runs. Both Eric and I had trouble with control on our turns, and setting us loose on a much steeper hill was begging for trouble without a bit more confidence. But three more passes, and two more with our instructor, and we were on the chairlift heading our way up.

Was I worried? Yeah, maybe a little. But not remotely as much as when I’d gotten off the bus a couple of hours earlier. Our instructor had done a brilliant job setting us up for the basics. And we had a couple of minutes of discussion before we got to the top. And then we looked down.

Man, that hill looks a lot steeper when you’re at the top.

And away we went. Slowly, turning (and avoiding other, much faster skiers), we started down. I went side-to-side on the track (easily 25 metres wide), turning in a path that would almost look like parallel lines connected with (very rough) semi-circles all the way down. The instructor and Eric followed soon after. We went back up.

By this point, my feet were in agony. The boots were too tight, and my feet not accustomed to that sort of equipment. I was looking forward to getting out of them.

My next run, I found myself going straighter. And I don’t mean in terms of side-to-side straightness, I mean more "straight down". My nice, parallel lines had become noticeably angled. About half-way down, the instructor had stopped to wait for us. She waved me on. At the bottom, Eric and Kirk suggested that I have a "problem with speed". To which they were utterly correct — I do, which is how I got into so much trouble the last time I went skiing.

So of course, on our last run, I went even faster. (Idiot.) We went down a different run — on the other side of the bunny hill — which was slightly steeper. And my slightly-foggy goggles didn’t notice the drop. And I lost control. And let my pole stick into the snow. And I kind dropped my chin onto the top of said pole.

And that’s it. Honestly. I lucked out in ways I still can’t comprehend. I should’ve had, like, an injury or something. But instead it was more of a wake-up call to SLOW DOWN a bit, and take it easier. Which I did, all the way back down to the rental office to drop most of my equipment off.

Getting the boots off? Almost as hard as getting them on, and infinitely more comfortable. 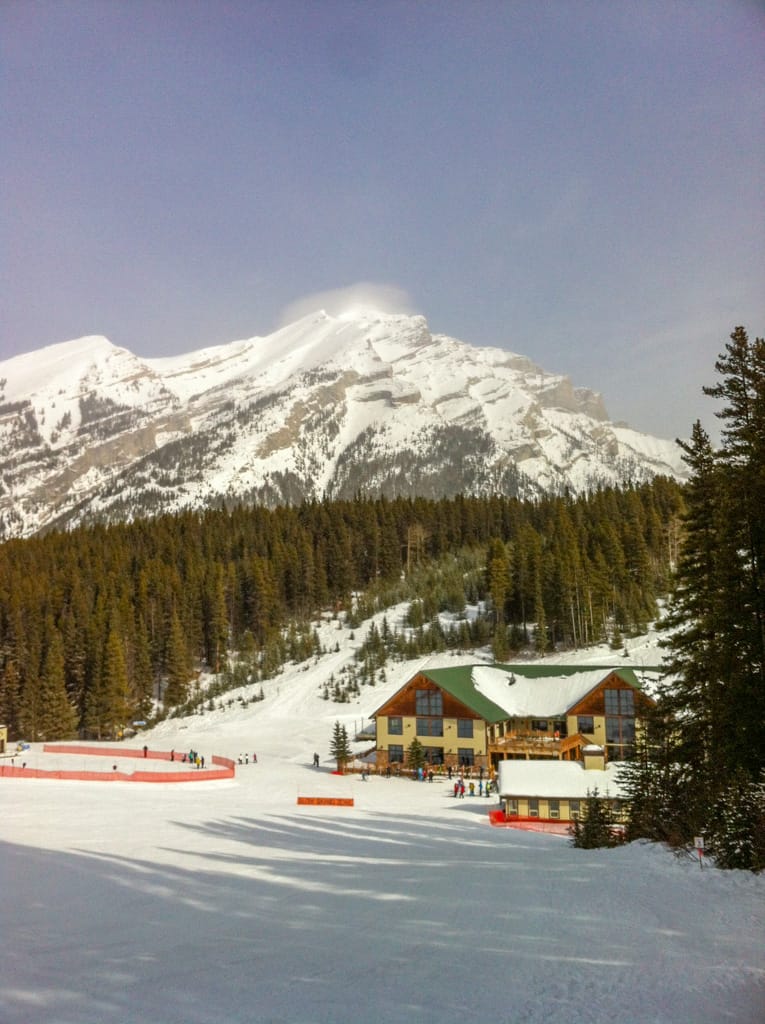 Over lunch we all discussed our various exploits. Jim had managed to find powder somewhere off in the corners. Others had done runs down the moguls (which we could see from our room in the chalet, and it looked positively terrifying from my perspective), while others had gone over on other hills. Colin was the sole non-skier, and had spent his morning on the snow tubes, which was my destination after lunch.

The tubes were built at the end of the mogul run, and were six long slides on which you’d ride innertubes (well, commercialized versions with handles and a full bottom). You had to haul said innertube to the top of the runs (the crazy carpet was without power for some reason), which was a much harder climb than any of us were willing to believe — I was winded by the time I got to the top. But the trip down was worth it.

Peita and her family (who’d snuck up separately) were there as well, and they made a few runs before heading home. Marek joined us for two runs before he declared it "too much work" and headed back to skiing. Eric, like myself, had abandoned skiing and found the slides a blast. Colin also returned for a few runs before the two of us opted for a drink at the nearby patio.

We sat in plastic Muskoka/Adirondack chairs and watched as people screamed down the tube slides. Screaming aside, it was a nice day to sit back and relax a bit — something both of us admitted was difficult to do at home. Then Colin noticed the chairlift next to the patio ... people were getting off, sans skis, at the bottom. He immediately declared that we needed to go up.

The chairlift brought us up to Norquay’s old tea house, which is the highest point at the resort. It’s a gorgeous view from up there, even if it was snowing, reducing our visibility. (I imagine the top of Sulphur Mountain is better, if only because it’s at the very top of the mountain, whereas the tea house is only on the east slope.) It was very peaceful up there. 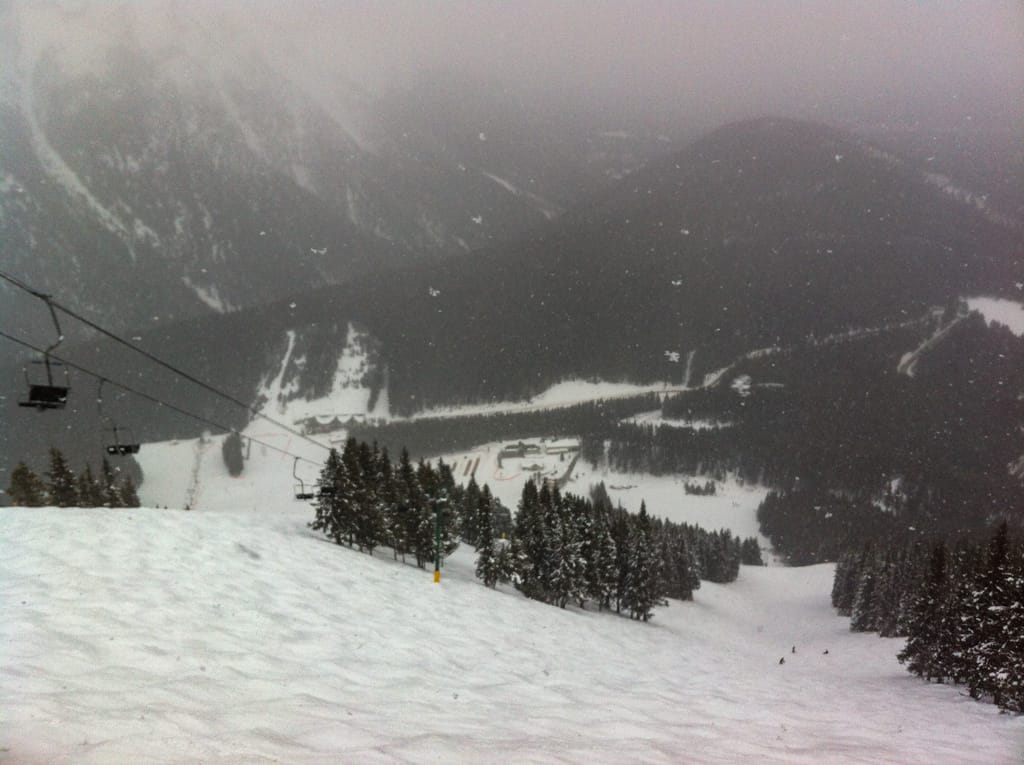 We got back to the chalet just after 3:00, and remained there until it was time to go. We piled onto the bus and headed into Banff for dinner at the Elk and Oarsman. We dominated the back room, and likely the entire bar’s volume level to boot. 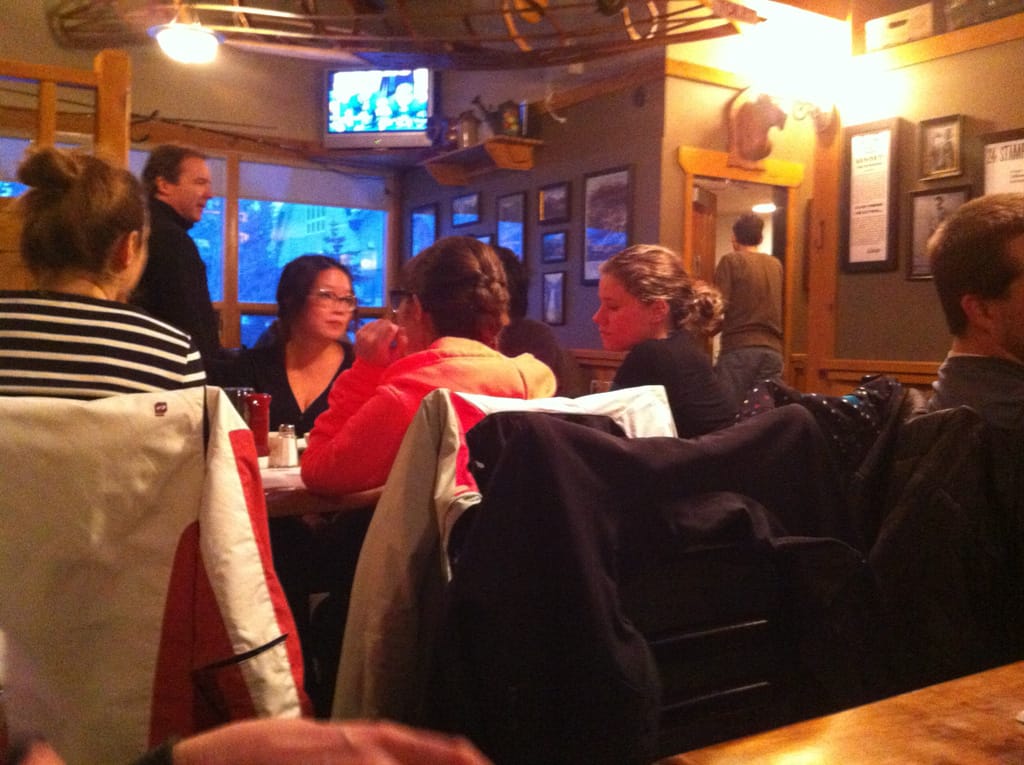 Then it was back on the bus for our return to Calgary, watching Big Trouble In Little China. The driver got us back in what seemed to us a record time. Something, I think, we all preferred. I was home just after 9:00, and attempted to write this blog entry. I fell asleep from exhaustion, barely a paragraph in.

All said and done, it was a brilliant day. And, thankfully, injury-free. Two days later, I’m still a bit sore (shovelling snow the morning after was much harder than usual), though nothing terrible. But I do have one small problem.