Every year, so far able to be said to be "like clockwork", we have Afternoon Tea on New Year’s Day. So far, every time has been at a Fairmont hotel (three times at the Banff Springs, once at the Hotel Vancouver), and I don’t suppose that tradition is likely to change any time soon. Though we’re definitely needing to branch out to other Fairmonts, and my sights are definitely set on the Empress in Victoria.

This year’s event was quieter, being just the four of us. Whereas last year we had more guests than the combined attendance of all previous NYTs, we intentionally kept it light and simple.

Monkey is now 5, and she’s doing what five year-old kids usually do: test their parents, find the holes in their armour, and attack mercilessly until they collapse in a pile of weeping sorrow. (Honestly, it’s a wonder that the human race has survived, given children’s propensity to drive their parents nearly to genocide...)

Add this developmental stage to the delirium brought on by the new toys at Christmas and ... well, "fire and gasoline" doesn’t really bring out the volatile situation, but you can get an idea. Adjustments have come in various forms (and is still on-going); one of them was a proposed cancellation of the annual Tea. We were more than a little concerned about behaviour not just in a restaurant, but in a High Tea environment.

I didn’t want to cancel it, even though I was the one who proposed it. I love New Year’s Tea. I love Afternoon (or High) Tea, and have had the luxury of having in several different countries, now. I was not looking forward to not going, and it actually hurt to suggest that we shouldn’t go.

Nevertheless, Monkey availed herself to recant (some of) her behaviour, which gave us enough faith to believe that we could make this work. (Choo Choo, not yet 3, has some education before her as well, but being young and painfully cute, has a way of getting away with things more readily.) So, we hurriedly packed up, and pressed out for Banff late this morning.

The first day of the New Year was bright and sunny, with the temp just below zero. Snow was still covering everything, and while the sun had melted the snow from the pine trees in most areas, there were still the stereotypically winter-white patches on the fringes once we got into the Rockies, in places the sun could not reach.

Banff was busy, busier than I can recall for any previous trip, but busy in a way that lent a wonderful energy. I would have loved to have gotten out of the car and walked up and down Banff Ave. a bit, if it weren’t for the fact that we were in a hurry. Despite leaving early enough, we somehow managed to arrive with only minutes to spare for our reservation. 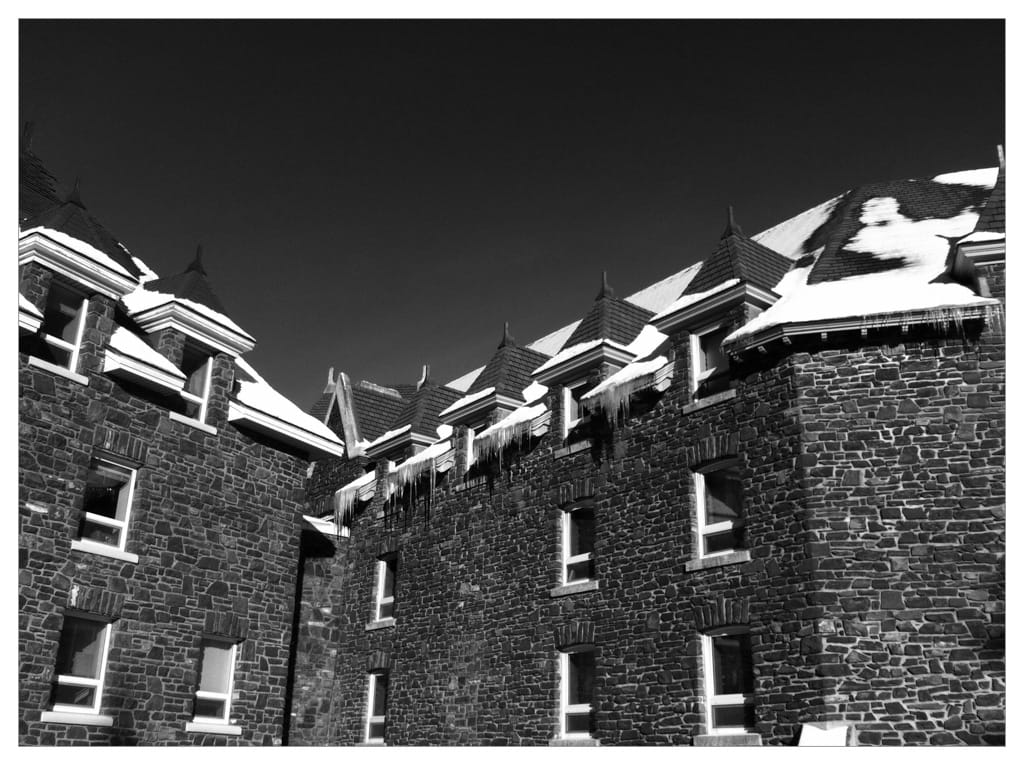 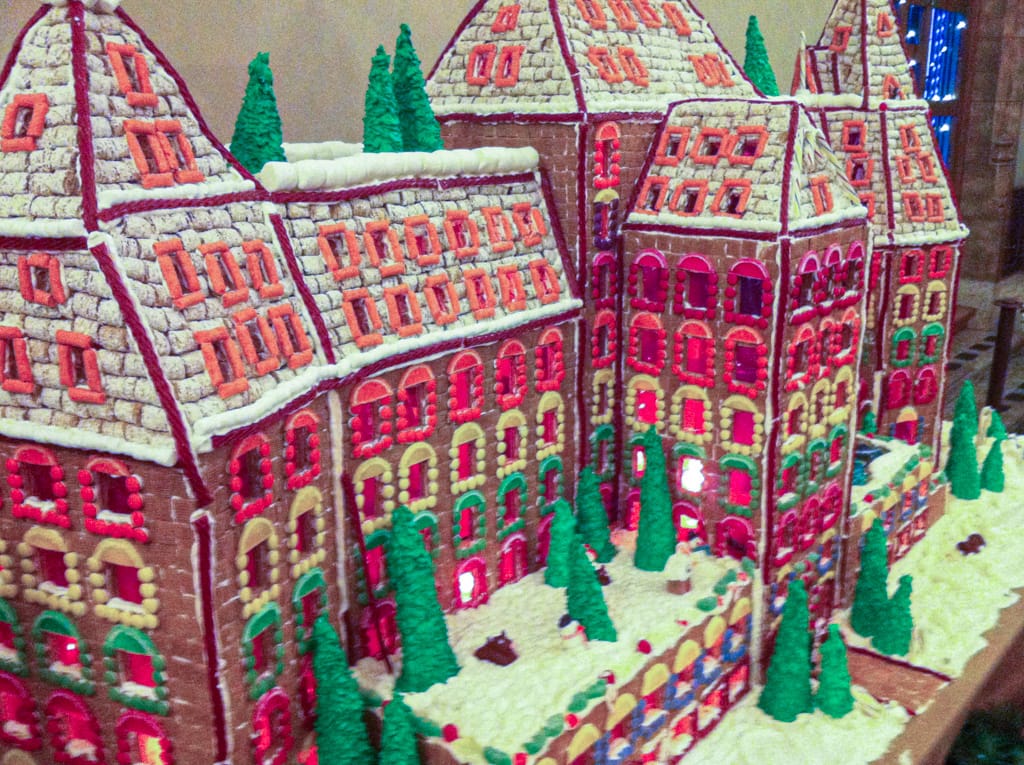 Sadly, we were not near a window — a first for us, and I think affected the kids a bit; they were a bit antsy to eat. The waitstaff was typically wonderful, and we were quickly set up with our teas, and confirmed the trays that were to come out.

The egg salad croissants didn’t sit well with either of the kids, nor did the watercress (though that didn’t surprise me in the slightest). Peanut butter and jam were gone in seconds. Monkey loved the (absolutely delectable) creme brulée, but Choo Choo couldn’t really get into it. In fact, Choo Choo didn’t really eat much of the stacks, except for the scone (lathered in strawberry jam). Monkey ate, or at least tried, everything, and even had a second scone. 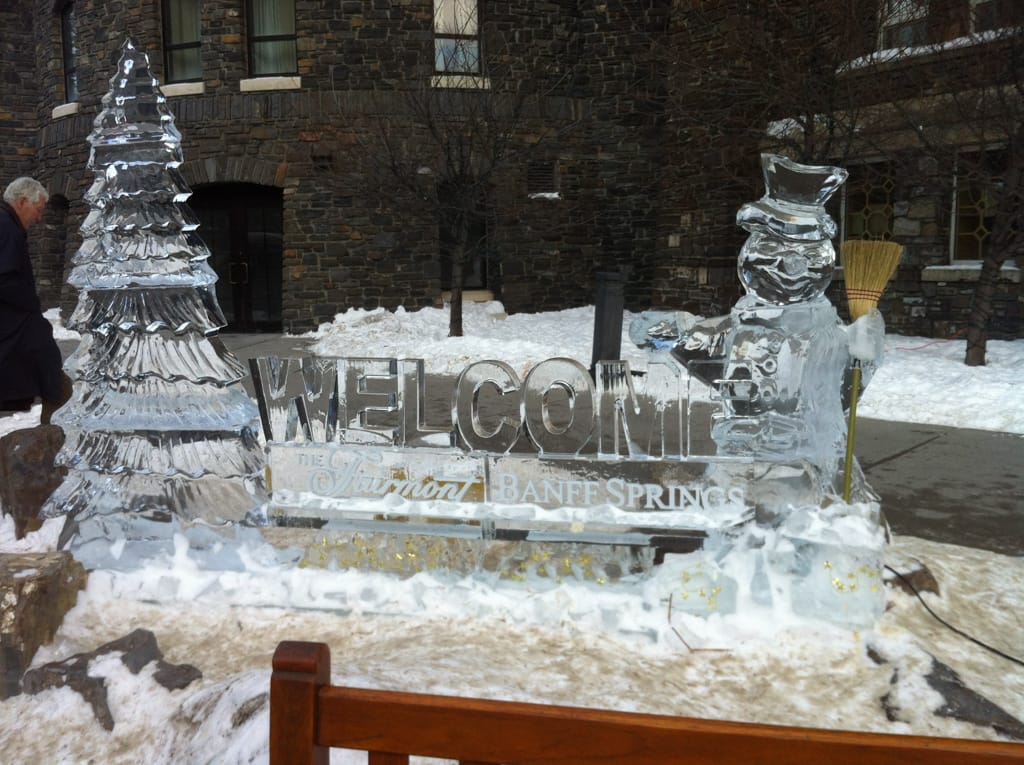 But the antsy-ness continued, and it was clear before long that Choo Choo wasn’t going to sit still for much longer. Monkey, for her part, did exceptionally well.

We headed out, and then up Sulphur Mountain to the Upper Hot Springs for a dip in the pool. It was, like the rest of Banff, quite busy, but not uncomfortably so. The water, however, was very comfortable, and lovely to rest in. We stayed no more than 15 minutes, mostly due to Choo Choo making a rather sudden dash across the shallow kiddie portion of the pool, aiming for a ladder into the deeper section. (One mother near me commented: "Wow, she’s fast!") The swim was over.

Choo Choo, the Great Fighter of Nap Time, was asleep before we got back on the highway for home.

I think this year will be the closest we ever come to not having New Year’s Tea, barring an emergency of some kind, as this will be the last year that I have wavering faith in my children’s behaviour. Next year, Monkey will be 6, and a perfect angel (right, Monkey??), and Choo Choo, though 3, will be learning much from her sister on how to behave well (right, Choo Choo??).

I needed today. I honestly did. The drive out of Calgary alone was worth it, as was the time in the mountains, however short it was. I ain’t saying I’m ready for this year to begin yet — I’ll be writing "2012" for a while, I’m sure — but we at least got it off to a good start.