When I have those moments when I think I’ve gotten too old, and I think I’m starting to feel like my age, I’m thankful for sudden sustained bursts of activity that remind me that, really, I just lead a much duller life than I used to, and my exhaustion is usually due to lack of sleep than from trying to do too much.

Heck, it even makes me feel a bit young! Ish. Sort of.

Except for the prolonged yawning, anyway.

Tuesday evening, I went on a mission to find "Santa" presents for Monkey and Choo Choo, for a party Evans Hunt was holding for all the company’s children. I failed miserably for them (Alex would later prove to be a much better Santa in this regard), though it wasn’t a total wash for Christmas as a whole.

Wednesday night was wrapping, notably a batch of presents from my sister that came in sans trimmings and trappings. My folding skills got a dusting off.

Thursday was the Evans Hunt End of the World / Last Pitch party, our annual fest with clients and spouses. I honestly feel like I leave these parties too early, and I miss out on the good stories. I got the backfill the following day, and was moderately relieved to have missed some of the trouble.

Friday was something slightly different, but very exciting (for me). Along with Tamara, Adrian, and Barb, I went to go see The Hobbit: An Expected Journey. It had been 11 years (I’d thought it only 10 at the time, but I just double-checked) since Tamara, Adrian, myself, and a couple of others had sat and waited for hours in the hallways at the Famous Players Chinook theatre (now Scotiabank Cineplex) to wait for the opening night of The Lord of the Rings: Fellowship of the Ring. A lot has happened in those years since...

Eleven years later, I still love movies like that: long, and epic.

I passed out nearly as soon as I got home, mostly due to exhaustion. (I’d also been running around before getting to the theatre, trying to find a Car2Go that I could actually get into — their system has been having issues for a couple of weeks, now.)

Saturday morning was a blur of surreptitious present-wrapping for the afternoon’s Santa visit, helping/forcing the kids to clean up the basement, making breakfast, and something else that I now forget. Then it was a blur of lunch-making, dressing (notably the kids in their nice dresses), and then loading into the car for the trip down to Evans Hunt for the party.

This was the first office party for kids that I’ve ever attended, at any company. For reasons I’m sure someone much smarter than me could explain, Evans Hunt employees have a statistically high number of kids under the age of 10, and I’m willing to bet at least half are two or younger. At any rate, the fact that all of these kids existed was what led to the scheduling of the party, which we parents were quite happy for. 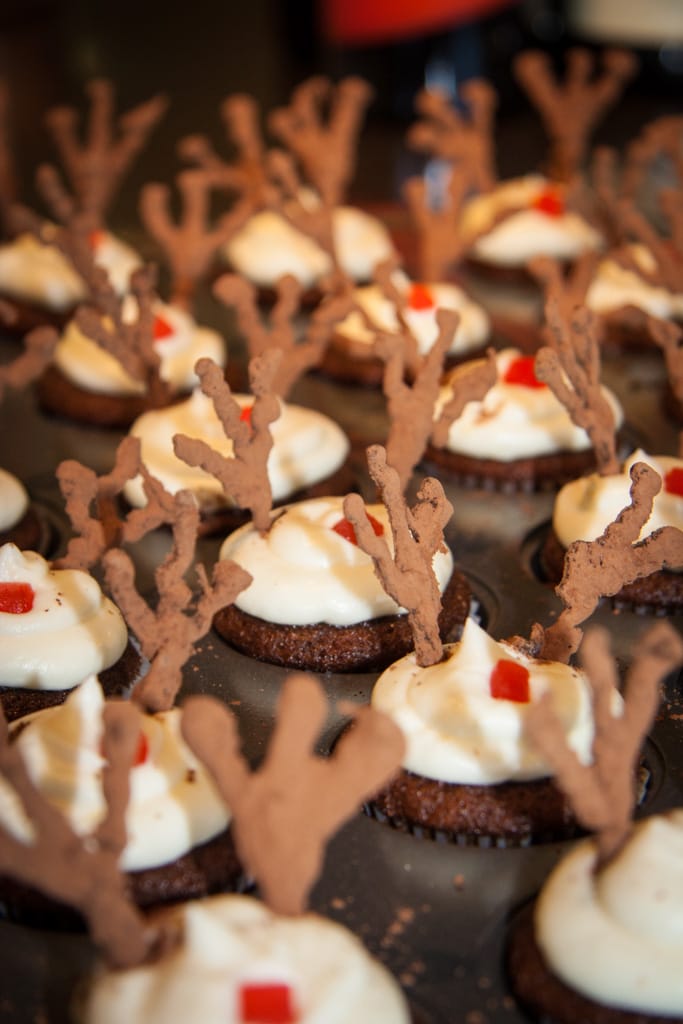 The sixth floor — the new part of the office — was chosen for the venue. The large boardroom was co-opted for gingerbread man decorating and crafts, the main space for what ended up being punch-clown tackling, with a large comfy chair set aside for the Big Man.

The kids rapidly multiplied, until the point where I think there may have been almost more kids than adults ... though there have been more adults acting like kids after a while.

When Santa arrived (Santa was a friend of a friend who does this professionally), the kids went crazy ... and Choo Choo almost never left his side, utterly desperate for, well, not so much a present as just talking to him. Quite the reverse of Monkey, who was terrified of Santa for the first three and a half years of life. 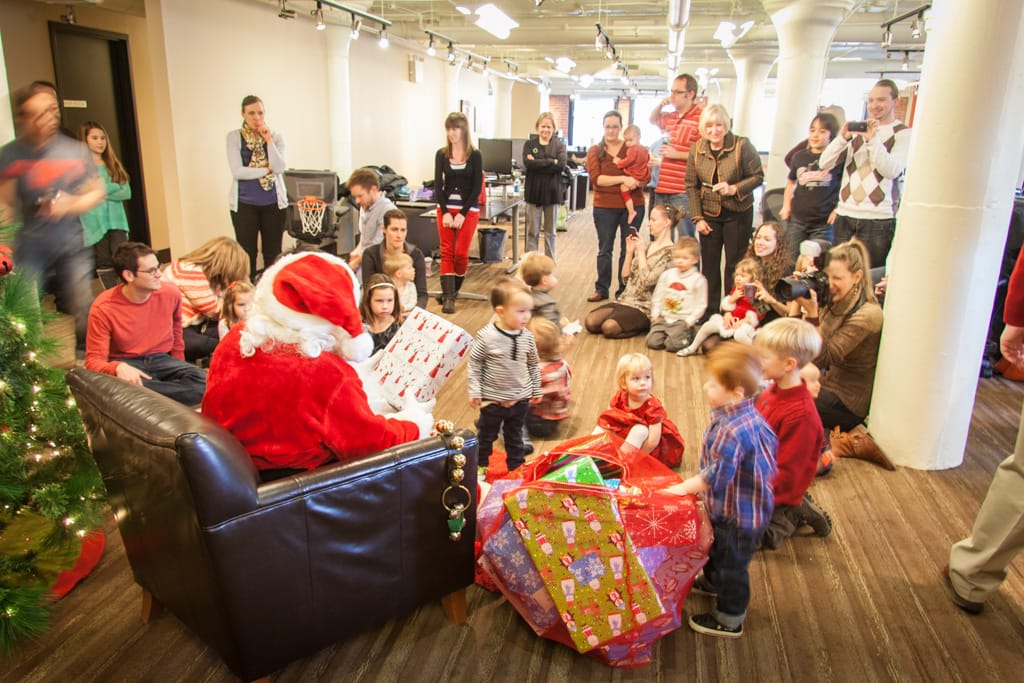 Monkey, interestingly, was the first one called up. She happily hopped up on his lap, talked a bit, got her present, and got down (with a hurried "thank you") before going off to find out what the present was. (For the record, "Santa" was brilliant at finding things the kids seem to love.)

Poor Choo Choo then had to endure most of the other kids coming next, one after another. She sat, enthralled, desperately eager to get on his lap. I managed to drag her away after a little while to drink more of her juice, when suddenly Santa produced the present. Choo Choo was off my lap in the blink of an eye, and raced over to Santa as fast as she could. She happily jumped up, and promptly asked for a "plane".

I have no idea where this "plane" thing was coming from. It’s now what she wants for Christmas. She was moderately disappointed at the Stella and Sam book she got instead.

Party over, we headed home so Alex and I could shower and change for the next event of the day, her office Christmas party. Grandma appeared shortly after 5:00, which was about the time I dropped dinner on the table for them, mostly so they could eat and not bother Alex and I long enough that we could get ready for going out.

We were gone just before 6:00, stopped at the hospital for Alex to get the tickets, and at the Ceili’s at Southland before 6:20. We sat at a table with Sarah, one of Alex’s regular co-workers, and Casey, who was one of the co-workers until she left to work at the new South hospital. It was the best move, since it was a good chance for us to chat with people we already knew.

But lest ye think we were done ... think again. Our destination? Toys ‘R Us. And not one, but two of them — one less than five minutes from the restaurant, and the other way up in the north. We didn’t get home until nearly 11:45. I got to bed a half-hour later after taking Grandma home.

Mostly me doing my Christmas shopping, notably picking up things for Alex, and picking up the Playmobile toys for the girls that Grandma and I had found on Friday.

And then we went to Zoo Lights.

We’ve done this many times before, but this year we opted to try something a little differently. We opted to try going by C-Train, now that the new West LRT is open, and happens to run from here out to the Zoo. It seemed like a good idea, and we were — at least initially — excited to try out the new route.

For the record, the trip is a minimum of 35 minutes (45 if you happen to just miss the train, which we did on the outbound). And although it was only -3, it somehow felt quite a bit colder, which we all seemed to notice. Thankfully the kids were well-bundled, so it wasn’t too bad for them.

We got home at 9:00, well after some people’s bedtimes.

Like mine. Or at least, that’s what it feels like. ‘Cuz after all this, I feel really tired.