Kids, we missed the Calgary Stampede this year. That was partly intentional, to be honest. Yes, it was the 100th anniversary, and Choo Choo was old enough to actually do some of the things there, but ... well, it was kind of crazy this year, and maybe the 101th anniversary won’t be quite so crazy. And you’ll be older, and slightly more ... how can I put this? ... controllable.

That said, you both like rides, Monkey especially. (We found that out last year.) So denying you two a trip to an amusement park, especially during what’s turning out to be Calgary’s best summer in a long time, is just plain criminal. So with Mommy’s acquired coupons, we packed you up, dragged out Grandpa, and all headed to Calaway Park.

In a word? "WHEEEEEEEE!"

We were a tad late leaving, because — completely stunning everyone — we all slept in. Well, most of us. Choo Choo, you were up, but you (in an extremely rare move) didn’t tell anyone you were up. I don’t think I’ve ever made pancakes so quickly before.

The park wasn’t busy when we arrived, though our arrival was a bit elongated as we tried to all find one another. But it wasn’t long before we were off into the park to wreak appropriate havoc.

First up were bumper boats. I was mildly surprised that they had any water-based rides, but one of my favourites seemed to not be an issue. As I commented to Grandpa, they’re not the ones I grew up with. Those were using real outboard motors, and we had to wear life jackets (we were also on Lake Ontario). Calaway’s are electric, with built-in squirt guns (that really need to have the ability to aim up/down — it’s hard to hit the guy in front of you). Sadly, Choo Choo was too small, and Mommy wasn’t "suitably dressed" for water play, so they went off while Monkey, Grandpa, and I tried to soak each other.

We found our way to a ride called the Samba Swing, which was a real definition of "spinny ride". Not only did it go around in a circle, it raised on an angle like a tilted ferris wheel, but each of the pods could spin around on its own. Mommy and Choo Choo went in one, while Monkey and I went in the other. Sadly, the pods tended to spin, even if you didn’t try, as thecentripetalforce caused the heavier person to swing to the outside. Monkey, you giggled pretty much the entire time; Choo Choo, you didn’t dig it so much.

Thankfully, merry-go-rounds are easier, and both of you seemed okay with that. We marched off in search of a train ride, which was preempted by a kids-sized rollercoaster (you’re still a bit too small for the big rollercoaster, Monkey, though you REALLY wanted to go on it). Mommy spotted a game called "Stinky Feet", which we played. I won, and the game attendant let me get two (smaller) prizes for the two of you.

The train ride was ... well, slow. But at least fun. And not rainy, like the previous one we’d been on. 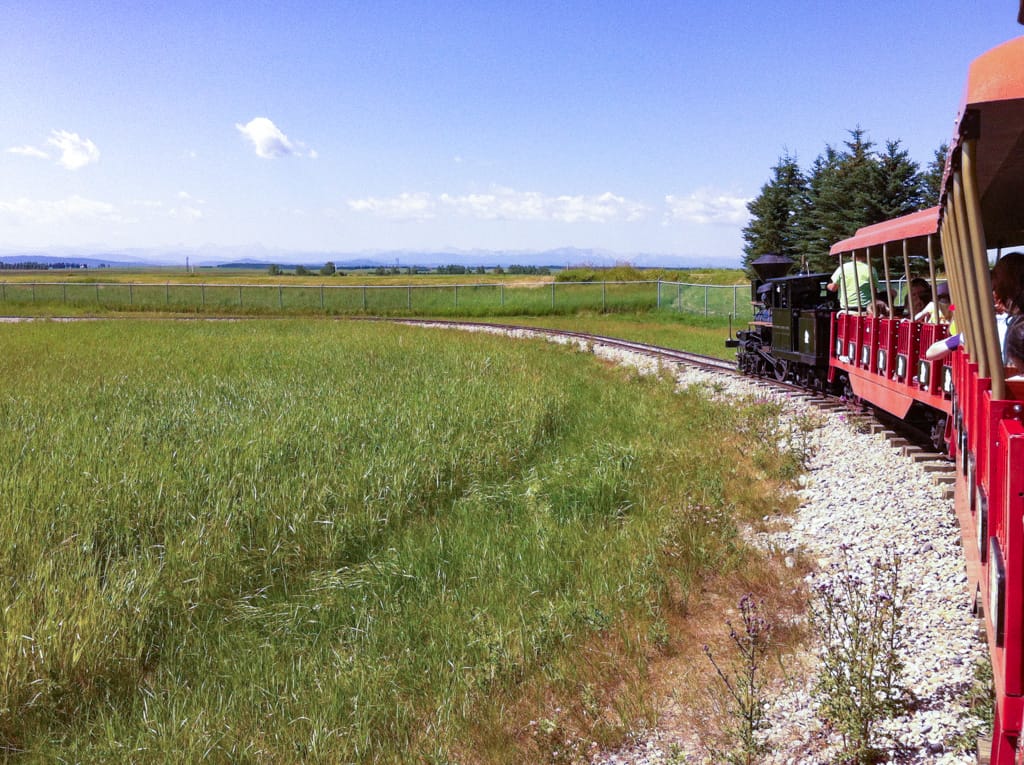 After lunch, we went in search of more rides. We found the Berry Go Round, which was another spinny ride (but not as spinny as Samba). Monkey wouldn’t let us spin at all, though I have no idea why. That’s not to say that I didn’t try to get us to spin — even just a little. Then Monkey and Grandpa went on an airplane ride while Choo Choo went and played in a tugboat playset. 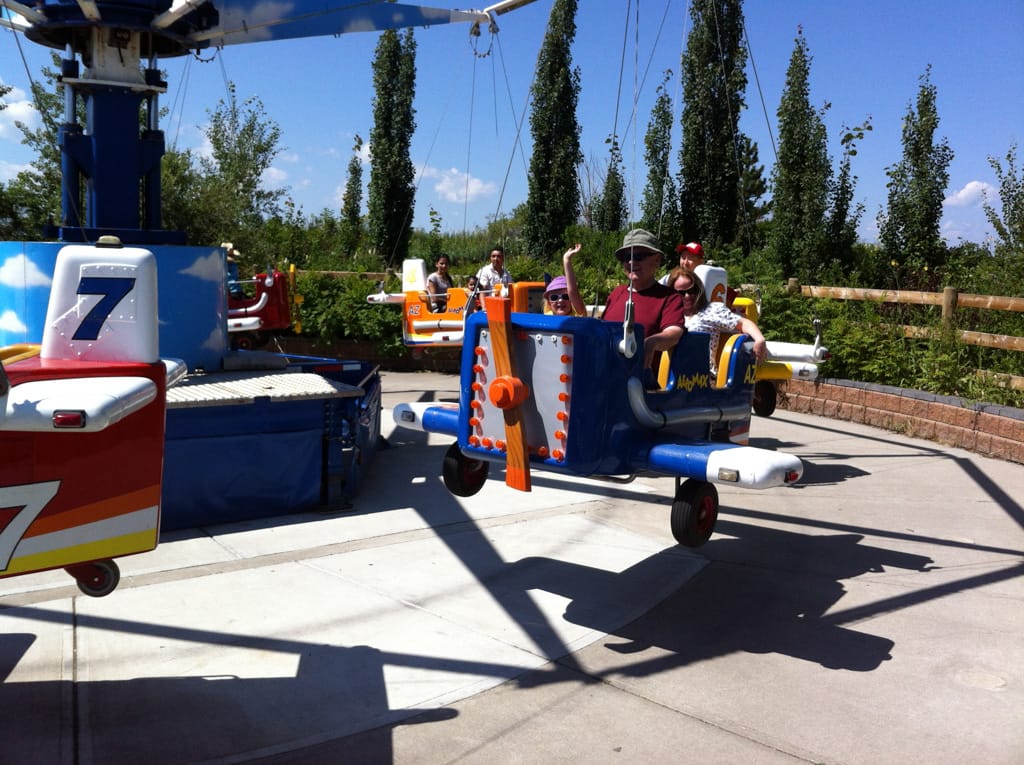 We tried to find ice cream. You’d think this should be about, oh, ever metre in an amusement park in the summer? It’s not, which I found particularly odd. Our search took us over towards Shoot the Chutes, which is (so Mommy tells me) an original ride, which doesn’t appear to have changed much since Mommy was a kid. Monkey, Grandpa, and I got in line while Mommy and Choo Choo went off in search of ice cream — sadly, Choo Choo, you’re just a bit too small for my liking.

It took nearly 45 minutes to get through the line, which went slower than it should have because they weren’t loading the boats completely full. When we finally got to the end, they had started maxing the capacity. As it stands, we ended up with a five-person boat; the three of us, plus a father and daughter.

The first hill caused a spat of maniacal laughter in Monkey. I’ve never heard her laugh so wildly, declaring the ride was awesome.

Well, that was the first hill. Which is about half the height of the full thing.

When we go to the top of the second hill — the big one — Monkey wanted off. Now. Please.

There’s a picture that gets taken when you go down the big hill. What you see is a look of abject terror on Monkey’s face, the sheer excitement of the kid behind her (that would be Monkey’s father, of course), and Grandpa looking like he was nearly asleep from boredom (Grandpa should play poker, really).

At the bottom, our boat kicked up a huge wall of water, which fell right on top of Monkey. That elicited some tears, which is understandable. Thankfully, Mommy had thought to bring a zip-up fleece, which replaced Monkey’s soaked t-shirt. Then we were off — FINALLY — for ice cream.

A clown found the both of you as the last of the ice cream went down, which you both loved (especially for the bubbles).

Exhaustion having set in fully with Choo Choo, we headed for home; Choo Choo was asleep five minutes later.

But worry not, we’re going back! Hopefully it’ll be as much fun as yesterday!