Just over a week ago, our kitchen officially went out of commission. Today, it looks oh-so close to being functional once again. Considering the short period of time, and some of the challenges that have come up, I’m rather amazed at the progress (and pleased with the results thus far).

At the same time, I’m starting to get worried. I can see what remains. I know how things tend to get rushed towards the ends of projects, and how corners get cut. I know how things can go from "good" to "okay" to "terrible" in a shockingly short period of time.

The Problem of the Day was flooring, notably the patches that are needed where the wall was removed next to the front door (the edge of the hardwood will need to be cleaned up so it lines up neatly with the tiling), the patch where the banister was removed, and the hole left in the floor where the fireplace venting used to be.

There’s three ways to approach this:

The cost doubles with every successive option, and adds more time to the final delivery.

In the end, we’ve opted to stick with #1. Our contractor has said flat-out that it’s a mistake, and he’s right. It is. We know beyond doubt that it’s the wrong thing to do — we should be making sure it’s clean and right throughout, and this is the best possible time to do it. Budget and schedule, however, are at work and we’d much rather replace it with hardwood that matches the kitchen. Right now, it’s just not an option.

(I hope we don’t come to really regret that decision in a few months...)

Anyway, we dropped by the house after dinner tonight to see that the floors look cleaner (in preparation for the flooring), the cabinets are all in place (they lack the final trim and doors, as well as the countertops), and our previously-removed eighth potlight has magically returned. 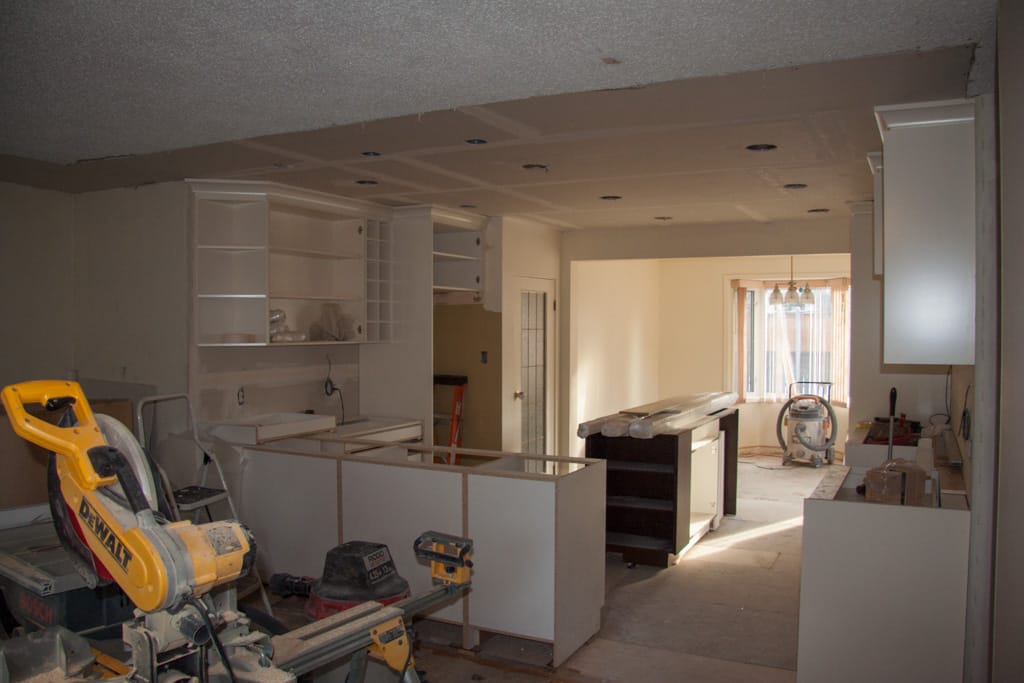