Well, since I last wrote, much has happened in the house. In our previous installment, the floors were starting to come up. Since then, a lot as happened, and we’ve had the prerequisite miscommunications, strange discoveries, and mild panic attacks (from us, the client — our contractor is likely annoyed as hell with us at this point).

But if there’s one thing I can say, we have progress. Lots of it.

Since we last chatted, the floors have completely come up in the kitchen. However, the subfloor isn’t perfectly level. The contractor said the addition on our kitchen was a "handyman special", which I gather is a term for "put together very quickly, and not enough attention was paid to the right things". I wasn’t the least bit surprised.

The wall near our front door is gone, as well, which exposed another issue with the house. In the original construction, there’s a 2×6 beam that runs from the wall perpendicular to the front entrance over to the main load-bearing member, which runs longitudinally down the house. One 2×6. Just one. 16 feet long. And it supports the weight of the gable over the living room. 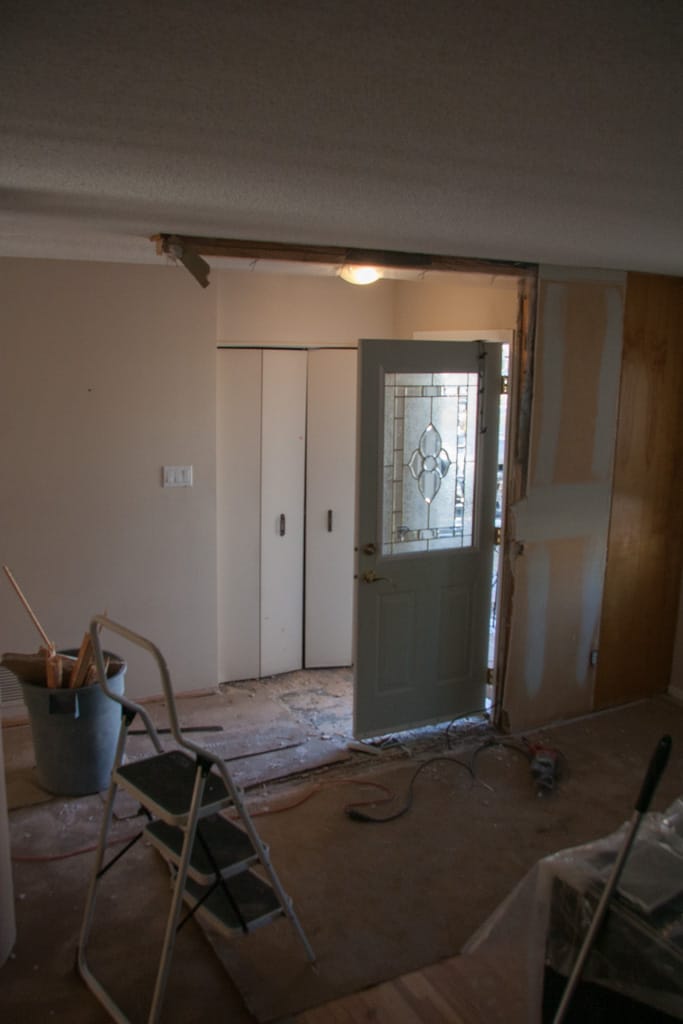 Those of you in the know are nodding, perhaps gravely. For the rest of you, this is the same as having a four-legged chair with one leg made out of spaghetti. You can sit on the chair if you’re careful enough, but ... well, don’t be surprised if it cracks and breaks. Which is sort of what’s happening now. There’s a crack just under the joist, and the entire ceiling is bowed. (Incidentally, it’s not likely a result of the reno per se — it looks like it’s been there a long time, only we couldn’t see it until we were eye-level with the ceiling.) A second joist will be added to strengthen the ceiling and prevent potential collapse.

The wall between the kitchen and living room is gone; that’s now a beam tucked into the ceiling to support the weight. The kitchen ceiling has come down (along with the paltry excuse for the insulation in our attic — something that will also be addressed) along with a fair amount of drywall in the kitchen. 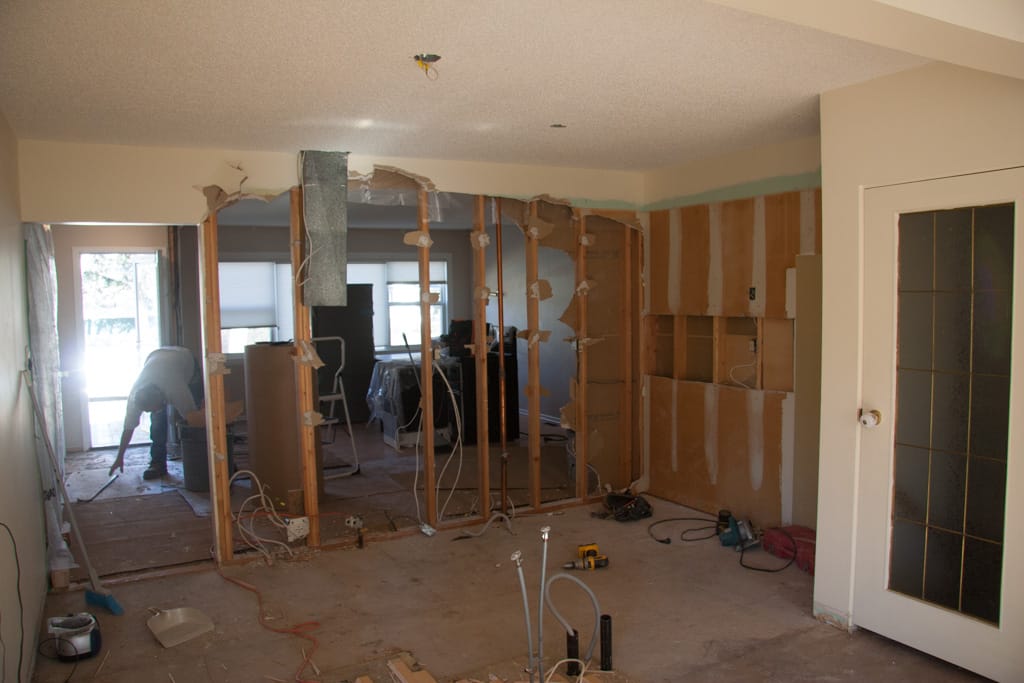 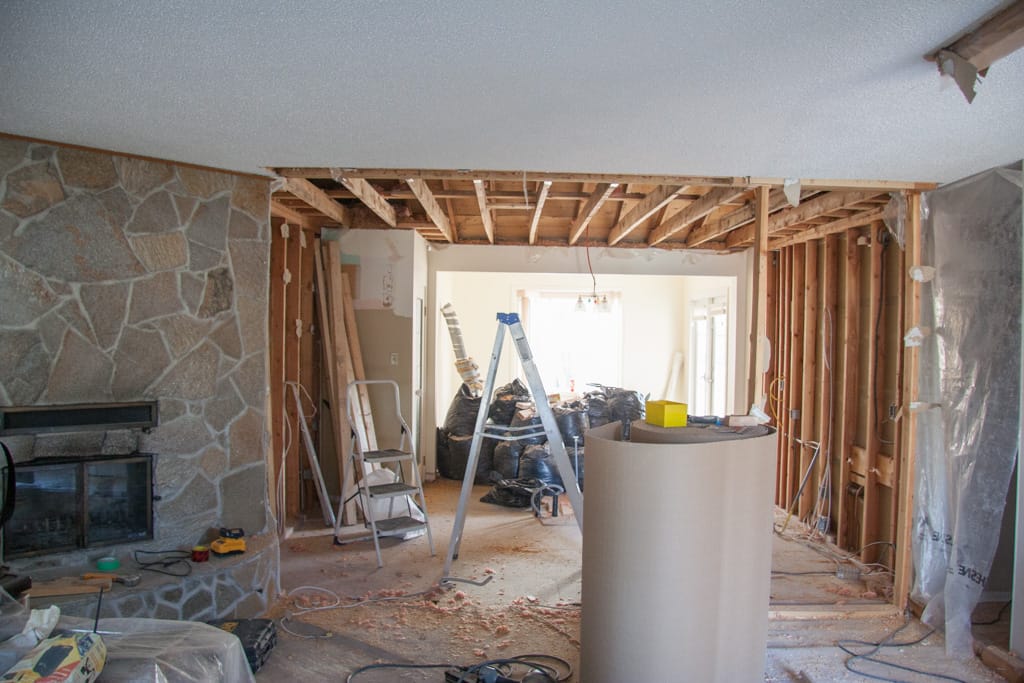 The electricians have come and (almost) gone, having run in the wiring for the new stove outlet, the light fixtures, and the wall sockets. The plumber will be along shortly to deal with the new fittings for the island, the new main bathroom vanity, and tweaks to our ensuite lines so we can hide them behind a pedestal sink (repurposed from our downstairs bathroom).

The fireplace is gone. We’d discussed at length about refinishing it, then changing it to a gas insert and moving it down the wall, but in the end the sheer cost of the job combined with the reality that we don’t use a fireplace that much anyway pretty much killed the idea entirely. While I do love fireplaces ... I’m not heartbroken over it. I’d rather have the space.

The cabinets arrive tomorrow. (Keep in mind, folks, the first bit of destruction was only on Monday of THIS week!) That’s assuming, of course, that I can get my arse down to the cabinet builder first-thing tomorrow and half off a cheque for the remainder of the price. Our contractor is none-too-pleased about that arrangement, either. We’re only supposed to be dealing with him, but things went wonky. My guess is that the dealings with the cabinet builder’s founder had slowly changed over the last little while as the builder hired new people to help deal with the workload, and they don’t follow the contractor’s verbal agreement, single point of contact approach. (The builder’s accountant doesn’t seem to much like our contractor, as he doesn’t follow the "rules".)

For the record, I side with our contractor. Why? Because I’m a contractor. I know that world works: you do what needs to get done, and worry about the aftermath afterwards. When you’re on a schedule — which we are — any slow down like that’ll kill you. Frankly, I want my house back, so I’m quite alright to drop a cheque off and make sure this happens ... fast.

Anyway, the electrical walk-through is tomorrow morning, followed (I think) by city approval. Plumbing will likely occur a bit before the cabinets actually get installed, which also gets an approval. Then the walls and ceiling are sealed up, cabinets go in, the countertop goes on, the floor goes in, and in theory, we have a kitchen back. (Alex will do the painting later.)

Total elapsed time? Hard to say, but possibly as little as two and a half weeks. Were it me? Two and a half YEARS. Maybe decades at the rate I’m going...