Well, if you read the note about Choo Choo’s birthday, then you know that we did a little bit of the reno work today. The single most major part of our reno work upstairs is the kitchen, and it’s basically getting stripped right down to the floor — the subfloor, that is. So that means everything needs to come out, and that’s an opportunity to try and make back a few bucks on our rather large reno bill.

Thankfully, Alex — the Queen of Kijiji — found a buyer for our cabinets, who was quite happy to take them off our hands. We didn’t get a lot for them, but when all’s said and done, we’re up on their disposal, rather than being further in the hole. Not that they’ve eliminated the total cost of the reno...

We started early this morning, just after 7:00. (Okay, no, that’s not necessarily "early" for some of you, but please keep in mind that neither Alex nor I were in bed before midnight, and we were already pretty wiped from all the nonsense going on this week with this move.) There was a mild panic about breakfast — I didn’t know if there was enough flour for pancakes, and then I couldn’t find the salt, and I was about ready to pull the trigger and do breakfast elsewhere. Thankfully, cooler heads prevailed (that would be Alex’s), and pancakes — our Sunday tradition — were still had.

We finished cleaning up the kitchen — cleaning dishes, wiping out cupboards, and making sure every counter was empty — before the gentlemen who had bought the kitchen arrived around 9:15. We’d sold them the kitchen only two days earlier, having taken quite a bit less than originally posted (but still WAY more than if we’d had to have our reno contractor take them out). The man arrived with his son (maybe in his late 20s), and promptly tried to figure out how to get the cabinets out. The kids played downstairs while I assisted with the removal (I was keen to get them out as quickly as possible, given that it was Choo Choo’s birthday, and I’d rather not be spending it renovating).

This was a major learning experience for me. The man and his son had removed several kitchens, it seemed (they’d removed a very nice one the day before), and knew what they were doing. Which meant I got to ask a few dumb questions as they went along. Such as: how are kitchen cabinets built?

Kitchen cabinets, at least modern ones, are build from "boxes". The boxes, defined as uppers and lowers, are just that — boxes. Usually five-sided, sometimes four. One side is left open for access (this is where you’d find drawers and doors), and with lowers, the top is also left "open", as it’s covered with a countertop. Even long cabinets are made up of several boxes, each box containing a set of drawers or doors. Each box is attached to the adjacent boxes, and every box is also screwed, glued, and/or nailed to the wall (notably to the studs) — lowers are often mounted on short frames to keep them off the floor.

The first thing to do was the island, which as the man (whose name I’ve already sadly forgotten — let’s call him "Clint"), suggested was in at least two boxes. Turned out it was four (we’d find that out when we pulled the countertop off), but so well attached that we couldn’t get the damned thing apart. In the end, it was a rather large pry bar and a strong back (notably Clint’s — his son, Dallas, was tackling the uppers at the time) that pulled it free. It BARELY got out our rear door.

One by one, the cabinets boxes fell — both figurative, and in once case, literally. One of the uppers — the one that had been above the fridge — suddenly gave way and dropped straight down onto the floor. I was rather amazed at how little Clint seemed to mind, given that he’d forked out nearly a grand for all the boxes. (I suppose that he’ll make it back enough not to mind.) Wires getting in the way were quickly dealt with using a pair of side-cutters — Clint reminds me very much of my brother-in-law, Craig, who doesn’t bother with turning off breakers. Clint just cut right through the line, let the short-circuit trip the breaker downstairs and move on.

You gotta admire — or fear — that kind of confidence in one’s tools. 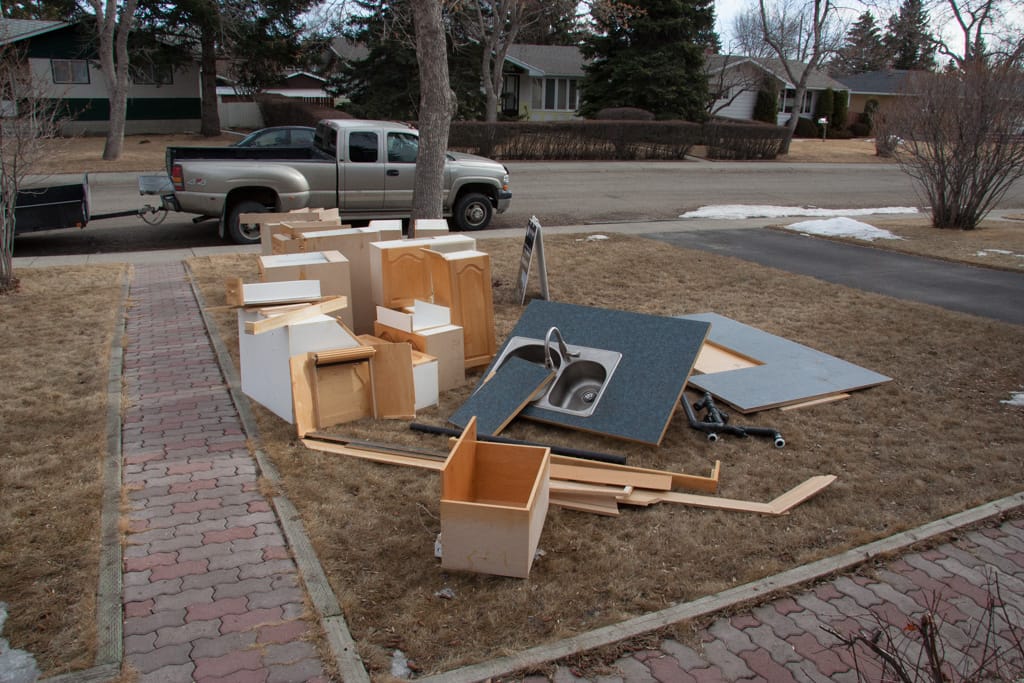 I lent a hand all along, not because I didn’t trust the two men, but because I know it’s not an easy job, and any extra hands often helps out. By 11:30, the cabinets were out and being loaded onto a trailer and a pickup bed. And we went for a much-needed lunch. 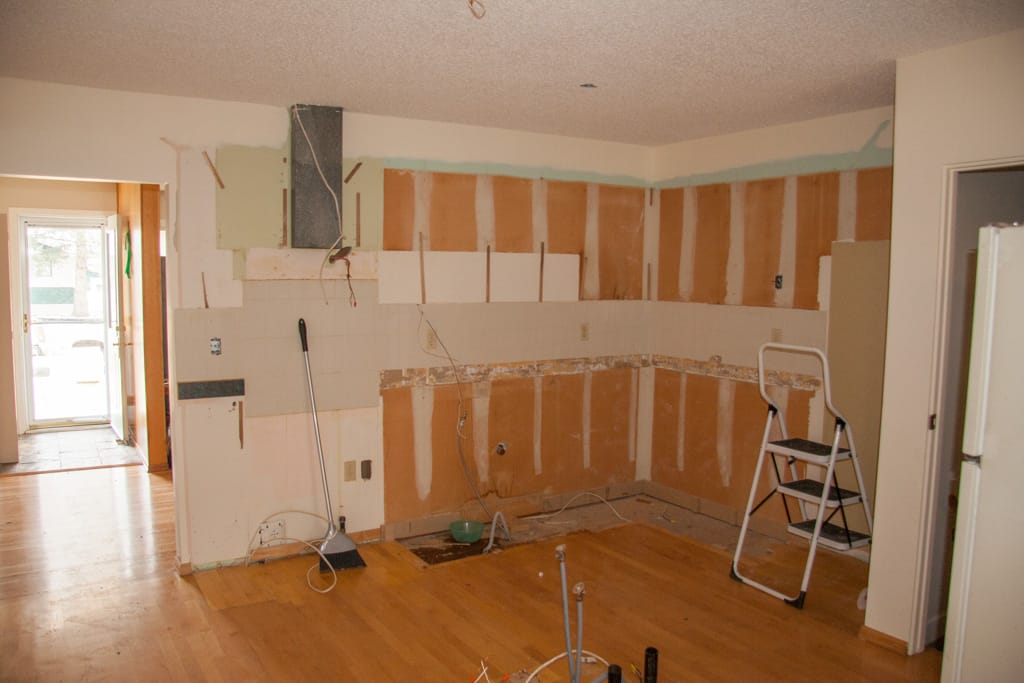 Upon return, I resumed my little destructive habits in our ensuite. Alex (the Queen of Kijiji) had lined up a buyer for it, and there was a bit of a pressing need to get it out. I’d managed to remove the countertop (a faux marble), which was a challenge at best since it EXACTLY fit the width of the room (it’s a narrow space). The cabinet boxes were effectively wedged into place with a pair of strips of wood (well, particle board) that made getting the boxes out damned near impossible. And I had to remove the toilet tank (the toilet’s going in favour of a high-efficiency model, anyway) just to get the drawers out, which allowed me to get the cabinet out.

After I got the cabinet out, I found three things.

First, the shape of the original countertop that had once been there, which was notched out of the wall on one side. Second, the guys who had renovated the ensuite and replaced the original countertop (and cabinet) with something "nicer" had effectively torn open the wall around the drain and water supply lines to ... well, I’m not sure what they did, but it’s left a big-ass hole that’s way past patching — we’re going to have to cut out and replace parts of the wall. And third, the original linoleum was preserved under the tiles (that are also used in our entrance). You’ve seen parquet flooring, yes? Well, this clearly was meant to invoke the feeling of a parquet floor, without actually BEING a parquet floor. It’s rather hideous, sort of like how an anglerfish (google it) is hideous.

Then we, for all intents and purposes, moved to the temporary house. This was actually our renovator’s idea. He has a house in the same neighbourhood (conveniently) that he hadn’t rented, and offered it for use for the cost of utilities. Bonus: he can wreak havoc in our house without the trouble of us being there. Downside? WE HAVE TO MOVE. Have I mentioned that I hate moving??

We were supposed to move last Tuesday. We had a U-Haul and everything. That’s when things went slightly sideways with timing. We moved things anyway, but then had to retract part of it for Alex’s dad (aka Grandpa), who was going to sleep in our basement. Not exactly ideal, but these are the joys with tearing your house apart.

Tonight, we’re in our temporary house. It feels weird. It feels ... well, wrong. I like my house. It’s home. It really is. My life is there, and not being there is actually hard. We’ll be back there, soon, I know, but until then I’m going to be feeling very out of place in this house. It’s not our house. It’s a rental, and we’re not really even renting (unless you count the fee we’re paying to make our house better, that is). It’s not my bed (though it was once Alex’s, and we did have it for quite sometime after we were married). It’s not our life. It’s ... a holding pattern.

The havoc begins Tuesday. Part of me can’t wait, the rest of me is terrified of things going wrong. We’ll soon see...