Well, about five years ago, we bought our current house. We knew that when we moved in, we were going to make changes. Our plans were lofty, and while we didn’t hold true to all of them (the tankless hot water wasn’t much of an option at the time), we did succeed in [totally tearing out and rebuilding the basement — the single biggest thing to start with.

Then we moved to Costa Rica for a year and a half. When we got back ... well, we started to notice a couple of things. First, this house was okay, but once you’ve got a very active person (or two) under your foot, you need a bit more ease at knowing what they’re up to, and having walls that obscure the view can be a problem.

And second, the kitchen was just plain uuuuuugly.

The dreams started almost immediately. And the biggest first change was the ceiling. We originally had what was called a "Florida" ceiling — a dropped ceiling filled with fluorescent lights. It was hideous. It made me feel like I was in a tanning salon (which, I should note, I’ve never been in) the entire time I was in the kitchen. Drove me bonkers. So, finally, we (and that is to say, I) tore it out.

This was a good first start ... but it really didn’t satisfy the need to take a sledgehammer to most of the countertops (ugly), the drawers (too small), the corner cabinet (annoying) and the upper cabinets (either too inconvenient, or otherwise mostly useless). There wasn’t enough counter space (the fact that we’re constantly cluttering it is another problem), the dishwasher wasn’t next to the sink (which ergonomically is one thing, but the fact that it means there’s 10 feet of hose coiled up under the floor worries me, too), and frankly it’s just not that attractive.

So after a couple of false starts with other contractors, we found a guy who not only knows the houses in our area really well, he lives here, too. Seemed like a perfect option. And so we began to think about our dreams and ideas.

We started off with a fairly basic idea: open up the space between the kitchen and the living room. (I wanted to move the kitchen into where the living room is now, but I lost that fight.) Soon it was new counters, and new cabinets, and new fridge (arrived just a couple of days ago, much to The Brick’s relief after it sat in their warehouse for over four months), new lighting, new floors ... the list goes on and on. (It also includes a new vanity for our main bathroom, which is fairly atrocious not only aesthetically, but also functionally ... that and there’s a rather large crack in the countertop.) Also, vanity in our ensuite removed (replaced with the pedestal from downstairs, which was removed for another vanity). 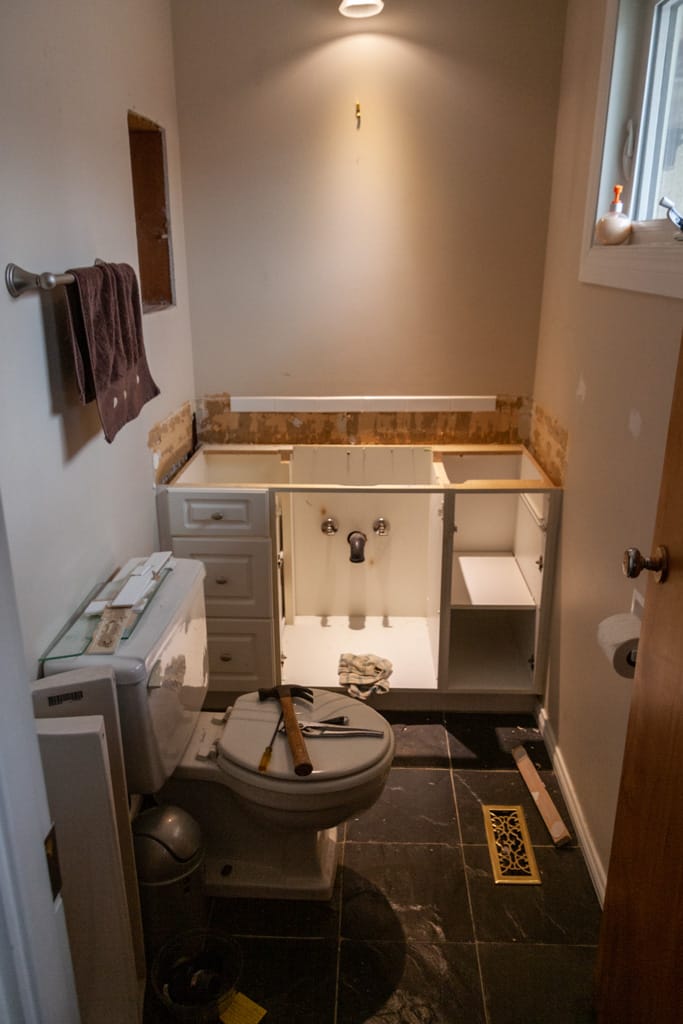 Needless to say, the changes occurring here in the next couple of weeks are so ... well, "dramatic" is about the best word to describe it, for several reasons, that we’re actually going to camp out at another house nearby just so we can actually have a kitchen and, y’know, eat periodically. But we’re not moving per se — all of our furniture is still here, so it’s going to be a bit of a camping trip, just indoors. Should make for an interesting experience.

We’ve already hit a couple of delays, which is mildly ironic given that the contractor we’re dealing with not only prides himself on time, but has repeatedly reinforced the need to have things locked down before he schedules anything. That was supposed to happen this week, on Thursday morning. So on Tuesday evening, we planned to move over a couple of the sofa bed mattresses, and some food. For that, I acquired a U-Haul truck...

...and 20 minutes after I get to our house, we found out about the first delay. A few revisions of our kitchen plan ago, we’d noticed that two parallel walls, each of equal length, had vastly different measurements in the plans. We’d called this out not only to our contractor ("don’t worry, they cabinet makers will measure properly before they start") and the cabinet builders ("don’t worry, we’ll measure properly before we start"), but somehow, after they’d measured properly, the deviation was so wide that it set them back. Our contractor apparently told them that they’d have to make up the difference, but then one of the cabinet maker’s suppliers couldn’t make the deadline because some things got resized as a result ... and we’re behind schedule.

I suppose that wouldn’t matter so much if we’d had a complete kitchen. But ours is mostly empty, and by noon tomorrow, there will be no cabinets, the stove will be disconnected, as will likely the fridge. Tomorrow, we start camping. There’s no reason to push it off any longer.

But the reno shouldn’t take more than about three weeks, assuming the contractor keeps to his mantra of scheduling (and yes, I know damn well that contractors and schedules go together like rosemary and the planet Pluto — remember, I’m in the service biz, and scheduling is something I know very well, and the contractor seems genuine about it). Still, a challenge it shall be.

So stay tuned. Updates will be coming.