It’s been a long silence, I know. This has been a tough year for the Sowrey family. Between kids growing up, new jobs, and pressures from all angles, finding the time to write is a challenge unlike any I’ve experienced. And frankly, it becomes a lot lower on my priorities, despite how much I miss it.

That brings me to today, Christmas Day 2011. Today is another long, hard day in a long line of long, hard days. But not a bad day — certainly not bad. Just long, and by the end of it my head is spinning and I long for a day where I don’t have to do anything ... despite knowing full well that were I actually to get such a day, I’d be bored outta my tree.

Such is the life of the working parent, I suppose...

The last couple of months have been filled in a near-insane level of activity, and almost no break whatsoever. Even when my most recent project delivered and my company closed down for the holidays, the gear just shifted into "Christmas preparation". This went until last night, at about 11:45, when the last present had been stashed under the tree, and I could sit down and relax for a few moments before Alex got home from work (she doesn’t get off work until 23:30, and not home until midnight).

Barely six hours of sleep ... and the mayhem began.

I think back to those earliest Christmases I can remember, and they are nothing but joyful. Oddly enough, I don’t remember fights with my sister, though I’m certain they happened. I remember wonderful things wrapped in colourful paper, hours spent in our basement (the tree was kept far from view while I was young), playing with new toys for hours more. I remember the trips to Mrs. Sinnott’s apartment for lunch, and afterwards the entire troupe would end up at our house for a massive, and very loud, dinner. Those years are long since past, never to return. I miss them greatly, but the memories haven’t faded.

It’s been 10 years since our last Christmas with dad. That, too, was a very happy Christmas. Although smaller, it was the day my brother-in-law formally proposed to my sister. There wasn’t a dry eye in the room ... partly because Craig was stringing Cathy along with some rather inventively-labelled gifts. It was a tremendous meal, too. And it was as loud as any dinner I could remember previous.

Ten years later, I’m starting those same memories with my kids. While I suspect we’ll not have the same insanity around the dinner table that followed each and every Christmas at Gatestone Avenue, Alex and I have strived to make some traditions we hope to keep going. (Whether or not they get more boisterous remains to be seen.)

Today, while still in the midst of presents, we Skyped with some of the family back east — technical difficulties prevented full communication, along with small kids eating up parental patience and stamina on both ends. Tempers flared, tears rolled, and a few things were thrown. Mom then reminded me that Cathy and I had done precisely the same thing when we were kids (even I don’t remember it), and her recommendation was a deep breath and naps for everyone.

Two napped. The ones who needed them most (the extremely tired and the last-shift worker), did not.

Brunch was late in the morning, waiting for Grandma to arrive. Moulded pancakes with fruit salad and maple bacon. A decent meal, if a bit of a struggle (pancake moulds and I have a tepid relationship). Though significantly better than my dinner meal, which was a slow-cooked orange-cranberry turkey breast. The Sahara might be considered more moist. Alex was luckily spared, as she had to work.

That’s been the strangest part of this Christmas, not having Alex around all the time. She’s usually out of the house between 15:00 and 23:50 on the days she works, including Christmas Eve and Christmas Day, two of the hardest days of the year to not be at home. It’s been hard on everyone, but I feel particularly bad for Alex, having to miss the evening events. We had to skimp on Christmas dinner, possibly my single favourite meal of the year, because Alex wouldn’t be here. (Hence the horridly dry turkey breast.)

It’s time to start thinking about closing out the year, which we’ll do from the West Coast, and look towards the events of 2012. I’m looking forward to a good time. 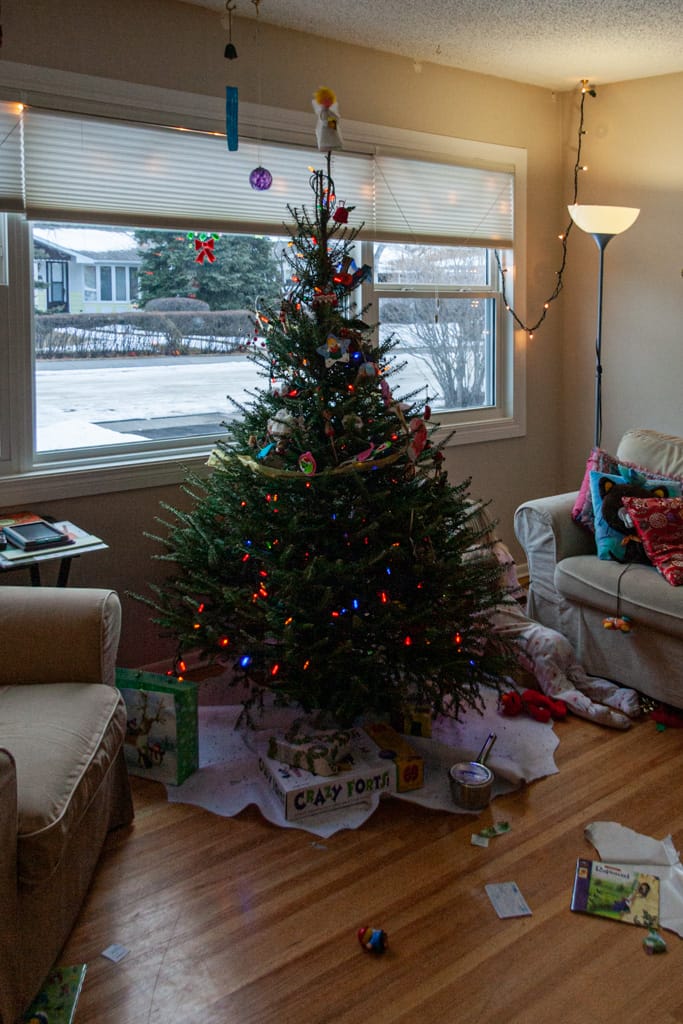