For at least the last couple of years, Heritage Park finds a way to bring in Thomas the Tank Engine for the kids. (It’s a fake engine, but the kids don’t care.) The big thing is to ride the train behind Thomas, and tickets for the chance on the Day Out With Thomas sell out well before the day even arrives.

This year, we’d resolved to get you on that train, Monkey. And ... well, we did try. But apparently we’d waited too long (trying to coordinate with other parents) and ... well, we blew it. This year, like last, probably all you’d have done is stood and watched as other kids got to ride the train.

But, thanks to a fluke chance, you got to ride something those other kids didn’t even know about...

There are things you’re just starting to understand about your Old Man (that would be me), Monkey. One of them is that Daddy loves trains. And that Daddy will — if given the chance — go to long lengths to do train-related things. Like last year’s little chase of CP 2816 through the mountains, or the model train show (although we couldn’t go this year, as it was the same weekend that I was recovering from surgery).

Virtually the day after we realised that there was no way we were going to get tickets to ride Thomas, my friend Graham sent me a message that CP 2816 was exiting it’s winter maintenance for a shakedown run out to Carseland and back (about 80 kilometres, there and back). It was supposed to be a Canadian Pacific Railways employee-only event, but Graham has a little sway with a few people and very graciously secured two tickets for us.

And thus was born the Super Secret Monkey Surprise.

It was thus created for two reasons. First, I didn’t want to tell you in case some plan changed. It’s a weird situation when it actually makes more sense to surprise you rather than to let you know about something fun that might not happen. Second, you were coming down with something nasty (and particularly on Thursday night and Friday morning, you were really, really, really sick) and taking you out on Saturday might not have been the wisest of moves. But, once Dr. Mom had given her approval, you and I set out for our little adventure.

You kept calling it the "Super Duper Monkey Surprise", which you were keen to recount to anyone who’d listen. You rambled on and on until we got to the Royal Canadian Pacific offices on 9th Ave. downtown, where we entered and went through a side door into the Pavilion, which is a mostly glass-enclosed space that houses Canadian Pacific Railways’ fleet of vintage parlour cars used on the RCP train. 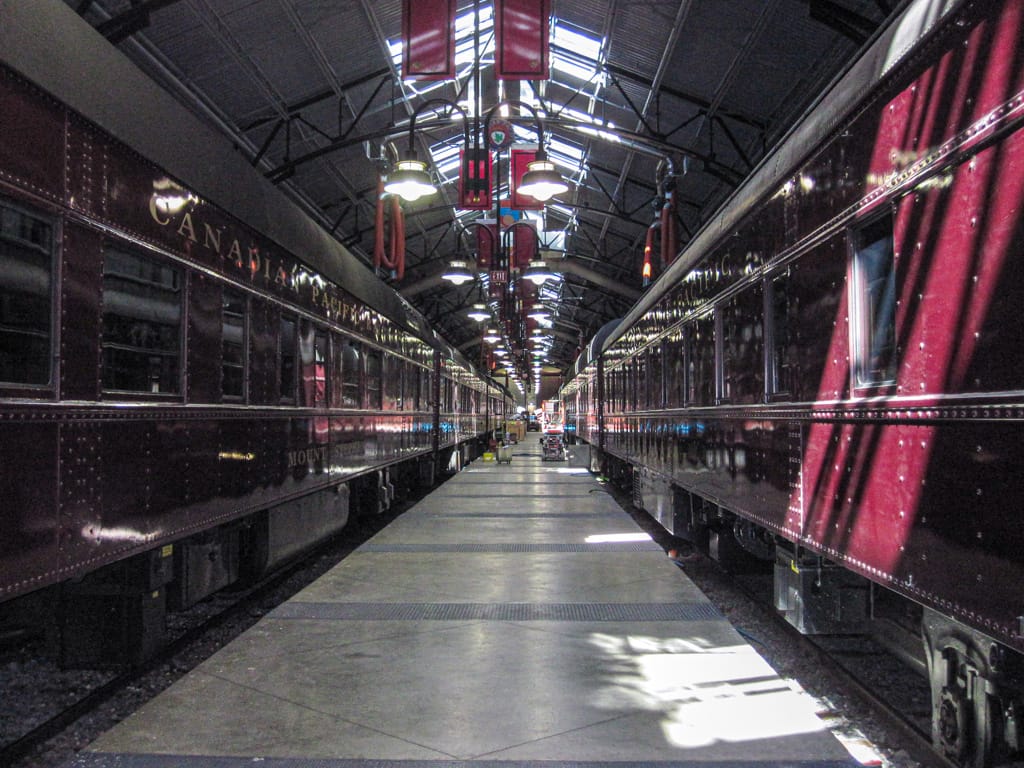 No sooner had we entered the Pavilion itself than you asked if we could ride the train — you’d figured that part out. As if on cue, that’s when CP 2816 pulled into the siding outside, steaming away as its bell clanged.

You were anxious, amidst a bit of coughing. You wanted to go on the ride, even though I’m sure you weren’t really sure what to expect. It’d been a long time since you’d been on a train (I’m pretty sure it was when we were in Scotland two years ago), and aside from Heritage Park, you’d never been on a big train pulled by a steam locomotive.

We hopped on, and immediately went forward, finding seats as close to the steam locomotive as we could. (There was a baggage car, generator car, tool car, the 1900 and 1400 F-unit diesel assists between us and CP 2816, so it wasn’t like we could hear it really clearly.) The passenger cars are all vintage, with giant comfy seats and enough legroom to host a concert. It’s what rail travel used to be, and I (for one) greatly lament its loss in favour of cramped automobiles.

Soon, the train slowly began to back up, and you got very excited to be moving. We had to back up quite a ways down the line (the siding is in part of the staging yard that allows the huge freight trains to line up to arrive and exit from Calgary westwards) before we could join up with the main line. Then, we started moving forwards.

I can’t really remember the last time I rode behind a steam locomotive on main line rail. I was probably around 5 or 6, and it was most likely behind CN 6060 when it still ran steam excursions out to Niagara Falls. (I suppose you could consider CP 2860 when it was running North Vancouver to Squamish as well, but BC Rail was only a Class II railway at the time.) Only CP 2816 and the odd run of CP 2860 ever go on main line rail these days.

It took a while for us to wind our way through the rail yards that stretch from downtown Calgary out to just past Ogden in the east. From there, the train picked up a bit of speed before passing through CP’s intermodal yard. After that, we were off!

And so were you. You didn’t want to sit anymore. You wanted to get up and walk around. This is another reason I love trains — you can do that. Just try wandering on an airplane. You get weird looks. And Monkey, you don’t sit still, so really, a train is the best thing for you. And you saw just about every window and vestibule on the the train. Several times. 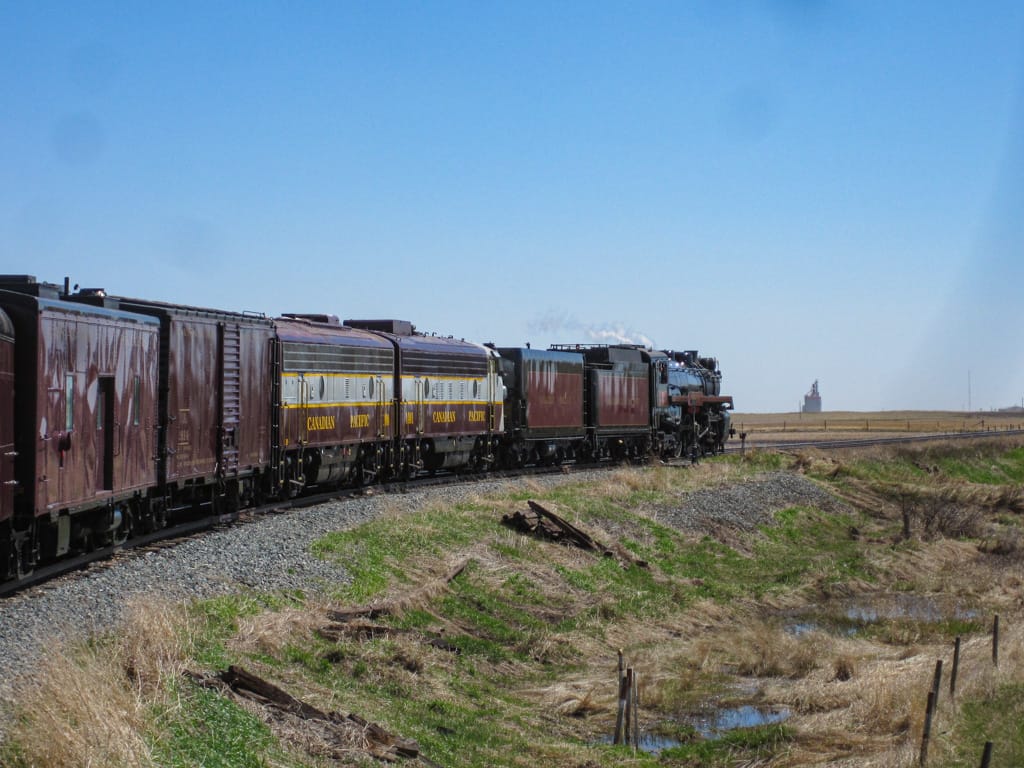 We arrived at Carseland in about 45 minutes. In fact, it wasn’t even Carseland proper — it was a wye just to the west of Carseland that also services the Agrium fertilizer plant. It was more than long enough to "turn" the entire train. And, thankfully, it was also dry enough for us to get off and look around a bit ... which, of course, means running up to the head end to get pictures with the steam locomotive. 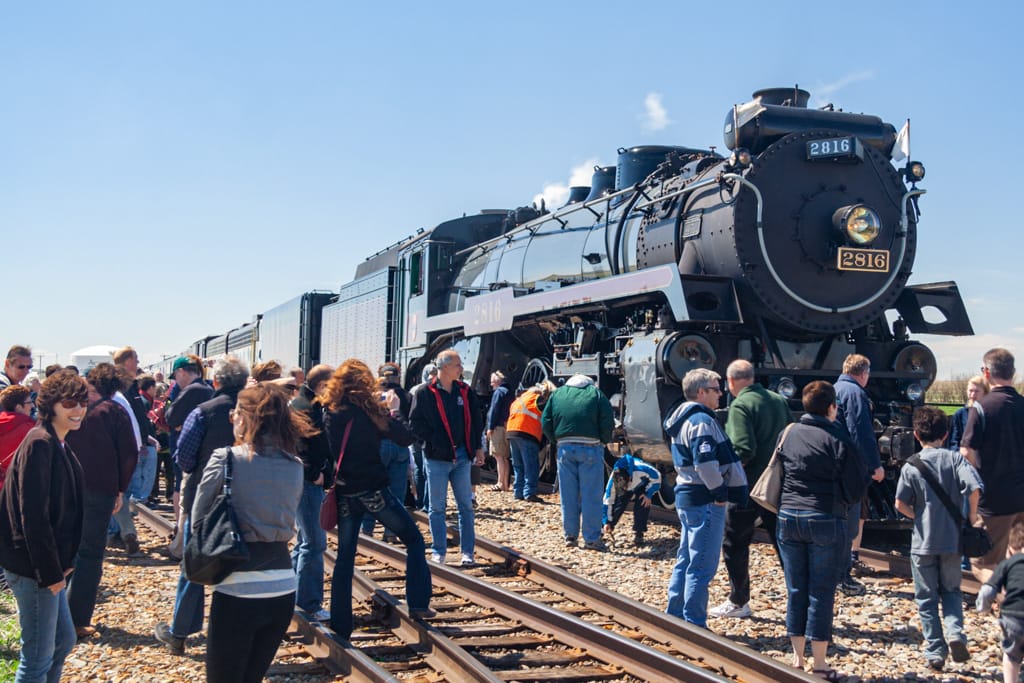 It was quite windy that day (it’s been quite windy for a few days, actually), and you wanted to get back on the train before too long. That gave you time to have more of your snacks and drink some more water, before resuming your incessant pacing up and down the train. I had to get you to stop for a while until the train moved again, so everyone could get on without running into you.

On the way back, you made friends with another little girl, and the two of you (and the girl’s little sister, I believe) hung out in the vestibules, going from one stool to another to peer over the high doors. You never really seemed to mind your hair blowing in the wind, or the periodic shifting of the cars as the train rolled down the tracks.

Although I don’t think you were quite as bummed as I was when the trip was all over. But you definitely said that it was fun, and how you wanted to do it again.

I’m pretty sure we will. 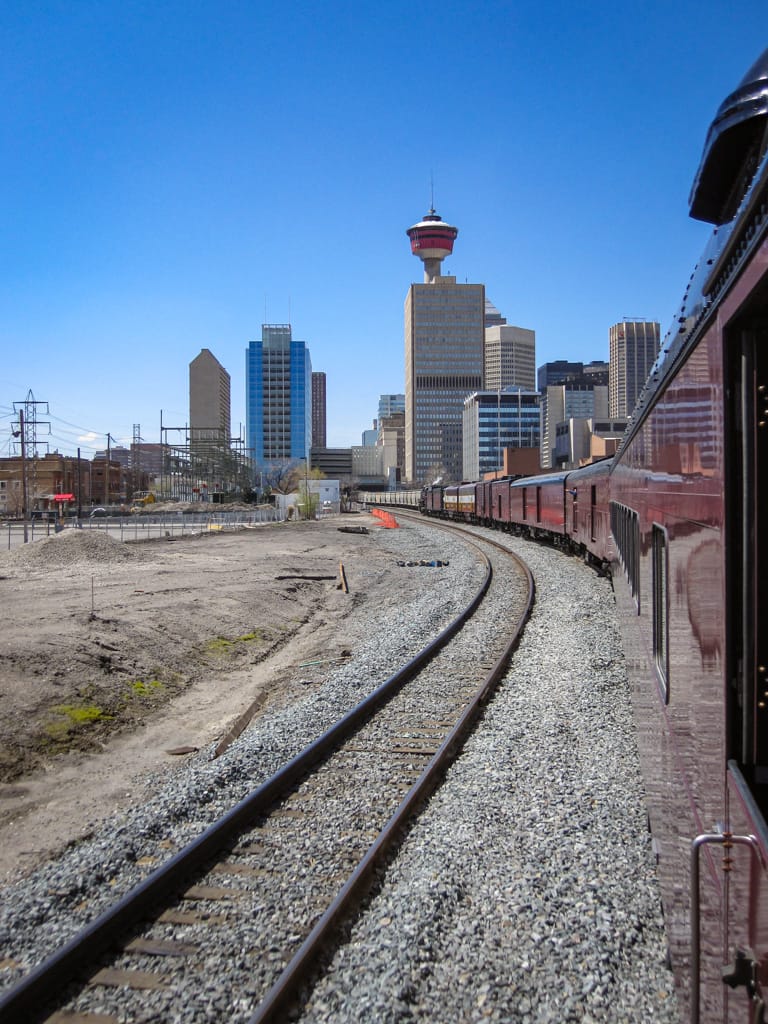