Yesterday, I finally got my hernia repaired. ("Repair", incidentally, is what the surgery is called.) It’s a short job that uses, believe it or not, part of a screen door.

It wasn’t a procedure that I was particularly looking forward to — the thought of surgery was more than a little frightening — but I’m sure I’ll be glad to have had.

Y’know, once all this pain subsides...

I called Rockyview General Hospital on Thursday afternoon to get my scheduled time. Surgery was at 12:15, and I needed to be there for 9:15. Basically, an entire workday having my bowels forced back into place.

No, really. That’s the procedure. Hernias form as a result of a break in the intestinal wall. Eventually, part of the intestine works its way through, causing the discomfort. Hernias don’t heal on their own — you either use a pad to keep things in place, or you get surgery to patch the hole.

The patch literally looks like a piece of screening from a screen door. It gets inserted and the muscles weave into it, creating the barrier. The screen is permanent. Does that make me a cyborg, I wonder?

Alex met me at Admissions. She started at Rockyview two weeks ago, returning to work after over three and a half years of kids and Costa Rica. It was actually weird to see her in scrubs again. She boasted about having Vietnamese for lunch with iced coffee. My nearly 12-hour empty stomach growled, and my head was going into full-tilt caffeine withdrawal.

We scooted over to Day Surgery, where I began my long waiting process with about a dozen others, and their friends/spouses (Alex had to back to work). I sat and read Cryptonomicon until my name was called, about an hour later.

The nurse took me to a change area, where I doffed my skivvies for hospital-issue attire. It was a little tight, and severely lacking on the fashionable approach, but the pant and extra top would at least keep me from freezing while I continued to wait.

My headache was approaching epic levels. Suddenly, those six daily cups of coffee really didn’t seem like such a great idea. I couldn’t read my book any longer — my head hurt so much I couldn’t focus. I resorted to rubbing my head and the back of my neck to help ease the pain and pass the time.

When my name was finally called, I was ushered to a toilet, removed the pajama bottoms and the cloak (keeping the ever-open gown on, of course), and trundled off to the operating area on a gurney. Once there, I rolled over on my side and declared I would nap while waiting for the doctor to show up.

A kindly nurse appeared and asked if I would like another warmed blanket, which was greeted with enthusiasm (seriously, why are hospitals always so darn cold??). A couple of minutes later, Dr. Steve Martin appeared. (Once again, I lamented the fact that he does not have an arrow through his head.). He talked to me for about two minutes, marked on my left groin with a ballpoint pen where he’d make the incision, then headed off to get ready to cut me open.

Barely 30 seconds later, the nurse appeared to deal with all the paperwork and formalities. While she was chatting, Alex appeared (having snuck away just long enough for a quick chat). The nurse vanished, replaced almost immediately (it was starting to look like a surgical assembly line) with whom I felt was the single most important person I would meet that day — the anesthesiologist.

I had a choice: local, or general. There are pros and cons to both (which he outlined fairly well without horrid detail), and I tried to state my local and general fears. In my world, I’d prefer to lose feeling due to my own actions, however ill-enacted they may be.

My fear? Never waking up again. It's exceptionally rare, I know. It's irrational, I know. But having a drug pumped into you under the sole purpose of removing all conscious capacity is ... well, terrifying. It's a lost of control. And yes, I know that falling asleep every night is more-or-less the same thing, but I don't fall asleep instantly. And I dream. So, I kind of sort of know that I'm still alive. This? It feels like someone else pulling a plug on me. And I found that crazy unsettling.

Alex said "see you later" as the nurse reappeared to take me into the operating room. It was intimidating, and for once TV and movies lived up to the promise: featureless, two massive lights over the table, machines that went "BING", and people in surgical gowns. The nurse had told me that I was to announce myself and what procedure I was to have. It came out like this:

"My name is Geoff, and I’m having a left hernia. No, strike that. I have a left hernia and I want to get rid of it."

I moved to the operating table and was set upon by the nurse and the anesthesiologist (who immediately asked if I’d made any decision yet), my arms put onto rests at the side. My right arm got the blood pressure cuff, the left arm — notably my hand — turned into a pincushion as the anesthesiologist struggled to find a vein.

Have I mentioned how much I hate needles?

Finally, a decision on my pain-killing was made. I’d asked all sorts of questions about risks (e.g. not waking up again), but in the end, the real decision was alertness. With a local, I’d be awake and wondering what was going on — I’m too curious for my own good. And with that, an oxygen mask was put over my mouth and nose, and an intense burning burst into my hand.

Daisy, Daisy, give me your answer, do...

It was like if you were watching a movie, and there’s a cut to a different scene. There was no fade to black — the memory just stopped.

"Take a couple of deep breaths, please," said a voice next to me. I was in recovery, absolutely no sense of passed time. "Deep breaths, please. You need to up your oxygen. We’ll get a mask if we need to." It almost sounded like a threat.

I dunno if it’s me or the machine, but I’m always under the limit. I was breathing pretty shallow, and my oxygen level was clocking in at 89. A couple of deep breaths later, it was 99. All was well.

I was trucked back to Day Surgery to complete my recovery before discharge. I needed anti-nauseant and was given Percosets to dull the pain. The only thing I needed to do before I could leave was pee — something that required me to drink a fair amount of liquid in advance. The nursing staff kept my in good shape, and immediately called Alex to let her know I was okay.

"Hi, Diagnostic Imaging? Can I speak with Alex the x-ray tech? Hi, this is Day Surgery. Your husband is alive. Feel free to come by whenever."

I "power napped" (nurse’s words) for the next couple of hours. I had to get another round of anti-nauseant, which dragged things out a bit. When Alex’s shift was over, I wasn’t quite ready to go home, so she ducked home to feed the kids. I resumed napping.

I finally left the hospital around 7, and went home. It was good to get home, although I was a little afraid of being tackled by Monkey. Thankfully, she was extremely careful, a gentle cuteness that I’d never witnessed before.

It’s been Gravol and T3s since, and moving around is difficult. Recovery takes a few days, but hopefully I’ll be moving around more easily soon. And eating. And coffee. 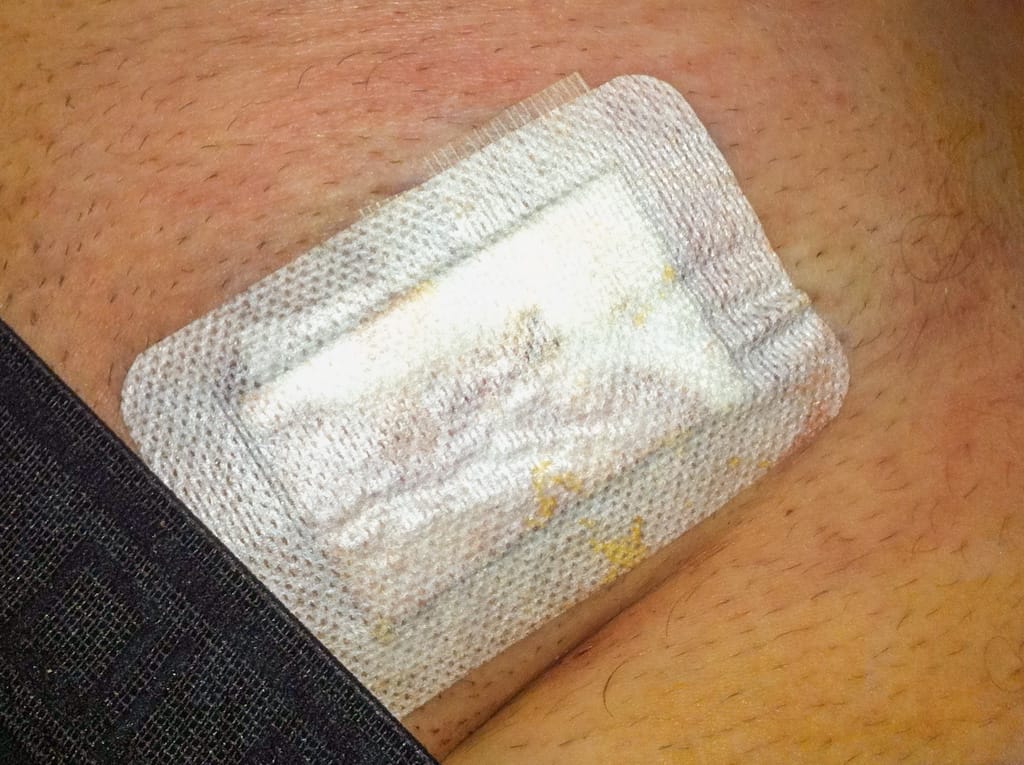