Well, Choo Choo, your first birthday is fast approaching. Four days, now, as a matter of fact. On Friday, you’ll turn 1, and Mommy and I will shed a tear as a our last baby ceases to be a baby and becomes a toddler. "Toddler" being the key word, of course.

And by "toddler", I mean "toddle", which is about the best way to describe your current state of bipedal motion. You’ve been scooting for the last couple of months, using an improvised push with your left hand to shove your left leg forward while seated, and using your right leg to pull at the same time. But you’ve started walking in short bursts, and are on the cusp of walking on your own.

If only you’d let go of Mommy and I ... which we really don’t want you to do.

Don’t get me wrong, kiddo — we want you to be independent, we want you to know the thrill of walking on your own. Now that it’s warm out, we can think about walking down the sidewalk without freezing in the last month’s deep freeze. You can (slowly) chase your sister, Monkey, as she screeches about the house. It’s the start of letting you play more on your own terms.

It’s just that ... well, Mommy and I can’t let go. We want to, but we can’t. It means giving up our little baby, just as we had with Monkey. Unlike Monkey, though, we know you’re our last — we won’t be having any more kids, which places a lot of our emotional burden (baggage?) on you. Sadly, if there was a way we could keep you as a baby, I think we might almost consider it...

We’ve been trying to get you to roll over, crawl, stand up — all the things that an infant should do at some point in the first year of life. We weren’t pushing you, per se (Monkey didn’t exactly follow the schedule, either), but we wanted you to at least try. Oddly enough, you seemed to have almost no interest in those things.

But standing? You were all over that. And when you found out you could move your feet and shuffle along the edge of the ottoman? Squeals of joy, I tell you. Naturally, we’ve been walking you around the house, your little hands gripping our fingers. We’ve also been slowly taking those fingers away, hoping you’d start to work on your balance.

It’s had its moments. You’ve had a couple of rather worrying falls (measured in the number of seconds from when you hit until you actually uttered a window-shattering scream), but you’ve always bounced back (metaphorically-speaking, of course) to try again. And again. And again.

I think we pegged you as "first steps" a couple of weeks ago, which was little more than a step or two (at most) before falling into either Mommy or my arms, usually with your tongue stuck out and a gasped giggle. Prop up, reposition, and repeat.

Over the last couple of days, you’ve had more than a couple of steps. We’ve seen as many as 10 or so steps in succession, provided you’re headed to something you want — like the cat piano, Mommy, or even walking to Monkey’s bedroom door to slap on it. But you still want a finger, and you’ll wrench yourself around to get a second any chance you can. I think, maybe, in some small way, you know that Mommy and I aren’t ready to let go, and you’re reminding us of that.

I know it won’t be long, though. Two, three weeks at the most, and you’ll be walking more easily. Doors will have to be locked, drawers secured, electrical sockets covered, hatches battened. And your happy squeal will be heard moving from room to room, the soft thumping of your feet the confirmation of your movement.

You’ll fall a few more times yet, Choo Choo. We all did when we learned to walk. Just know that Mommy and I will always try to catch you, help you; kiss you when you hit the floor, and always get you back on your feet to try again.

You’ll see that pattern a lot, by the way. It’s about being a parent. 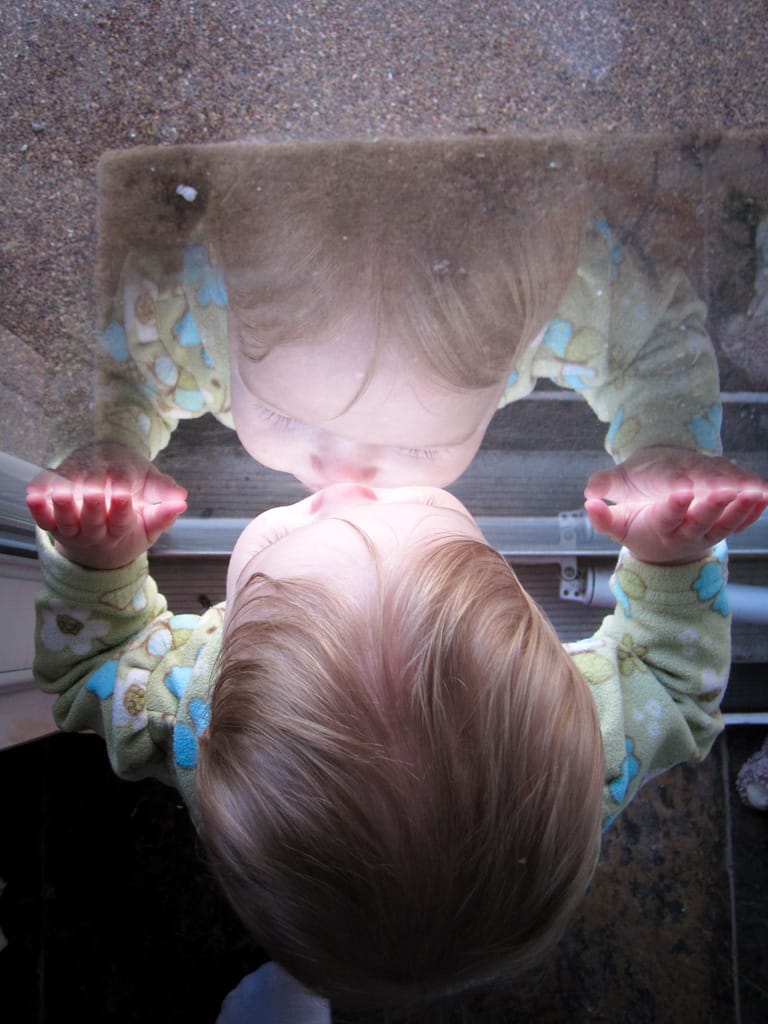