Sorry, kiddo, it’s been a while since I last wrote. I have no real reason/excuse, other than I just haven’t. That’s bad of me, and I will endeavour to write more often. Maybe one day, years from now, you’ll be able to read it all, too. Certainly for now, you will have no recollection of it, except through the mountains of photos Mommy and I took.

That’s something, incidentally, that you and your sister will never really fully grasp, I think. You’re the first generation where digital cameras are ubiquitous, and almost your entire first few years will be documented nearly daily. It wasn’t that way when Mommy and I grew up, and I can only imagine what your kids will say.

I suppose, as a result, you won’t be able to say your first Christmas wasn’t eventful.

I won’t go into the details of our trip to Grandpa and Granny’s (just read the previous few entries), but there are a few things that perhaps are worth mentioning about yourself.

First, you’re starting to nap during the day. Until about a month ago, you refused to sleep — refused with a capital SCREAM. You’d have nothing to do with it. You still put up a fight every now and then, but generally when you go down for a sleep, you actually sleep, and it’s gone from quarters of hours into hours. That makes both Mommy and I very happy. Not just for your own health, of course, but because it means some peace around the place while you and your sister are snoozing. (Like, say, right now!)

Second, you’re vocalising a lot more these days. I think there was a time when you might have been scared to because Monkey was always and omnipresent and overpowering force. Of course, I still hold that when you cry, you can EASILY drown out Monkey at her loudest. (This is a test, incidentally, that I have no desire to actually execute. My ears couldn’t handle it.) But you’re chatting away quite a lot now, even when we’re not in in the room.

That’s an important point, too, I might add. You’re also getting to the point where you don’t need Mommy as much as you did (she can leave the room without you panicking), you find me a comforting presence (thank you for that, by the way, I was beginning to think I was useless in your eyes), and you can even stand being around strangers for a while without worrying where you parents have vanished to. You’re not nearly as stranger-friendly as Monkey, though, and maybe that’s a good thing. That said, you didn’t mind seeing Santa one bit, whereas we had to coax Monkey to even get near him.

You’ve got two teeth right now, both on the bottom and both extremely sharp, and we’re certain more are coming. You’ve been drooling almost non-stop for nine months, which is often a sign of tooth movement. Nothing new yet, but we might yet see one for New Year’s.

As for movement, you’re still pretty stationary. You’re able to sit on your own without trouble, and can roll back-to-front and vice versa. You can’t sit up yet on your own, though. Standing is okay, but you look like you’re doing the hula. Jumping is good, provided you’re in the Jolly Jumper. But no crawling. You might yet follow in Monkey’s footsteps (no pun intended) and walk before you crawl. We’ll need to get you some squeaky shoes.

You’re 3/4 of the way through your first year, and despite all the troubles we had getting you out the door, you’ve shown no signs that there were any troubles to begin with. That is, without doubt, the biggest Christmas present a father can receive (especially considering the panic we went through nearly a year ago).

I hope you’ve had a great first Christmas, Choo Choo — I look forward to many, many more with you in the years to come. 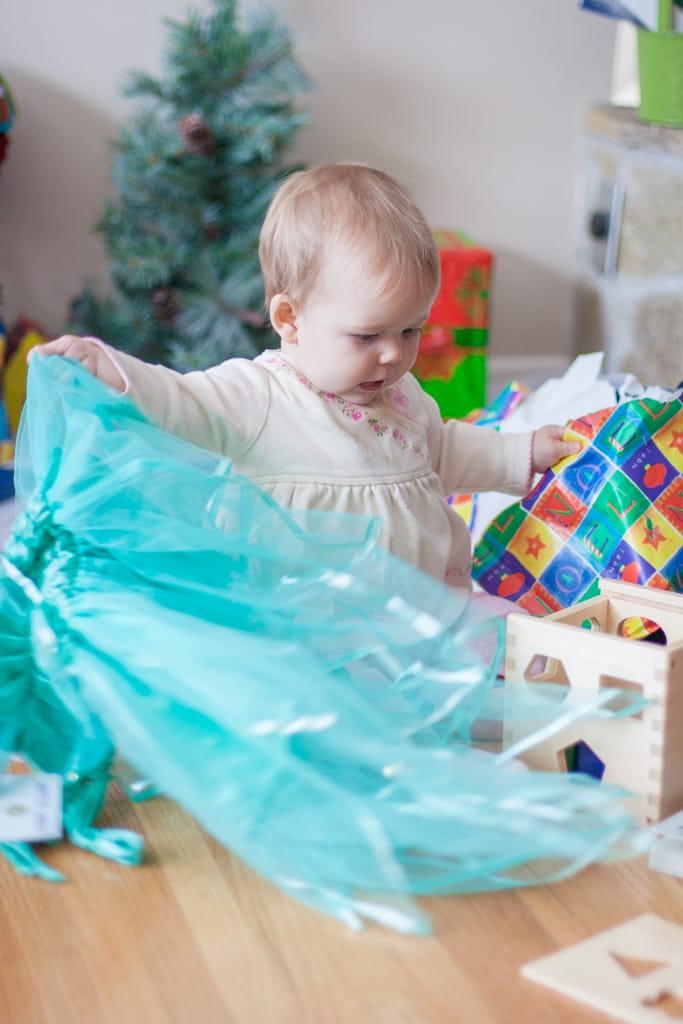