Every year, the City of Vancouver puts on a light show in and around the miniature train in Stanley Park. Last night, after the kids had gone to bed, Allen, Jean, and I discussed the possibility of going. The catch was tickets. Tickets for the ride are best bought in advance, and usually sell out in November. But that’s only half the rides — the other half are sold the day of, and you need to be present at the booth to get them.

Jean very kindly (extremely kindly? suicidally kindly?) went down this morning, in the cold and the rain, to line up and get tickets for the "best possible" time for us to ride, around 17:30. That is "best" as it’s early enough that we can still have dinner at a reasonable time, and it’s late enough that Nikki can join us from her job.

Tonight, I also remembered how miserable Vancouver can be in the winter.

It rained all day, and the temperature never got above 4 degrees. It could be easily argued that, despite being colder, Calgary has much nicer weather. That rain makes a lot of difference. So it was that, in the rain, we all trucked into Vancouver and found our way into Stanley Park, and parked near the miniature train area.

You couldn’t miss it if you were blinded, locked in a box, and put inside a cargo van. Someone said there were over two million lights, and I could believe it. I’ve never seen so many lights, and the Calgary Zoo Lights go a long way to make a push for "most lights". If Zoo Lights went for the density seen at Bright Nights, Stanley Park’s version, over the same area that it uses now, I think the Calgary Zoo could be visible from space.

Despite the rain, we wandered about the lights while waiting our ticketed time. Some of the items, notably a rocking stand of lighted nutcrackers, are old and probably well-predate me. Most of the lights, however, are LED and considerably more recent (not to mention energy efficient — important when you’re using two million lights). It’s a hodge-podge of lights, and worth the trip around while waiting your turn at the train. 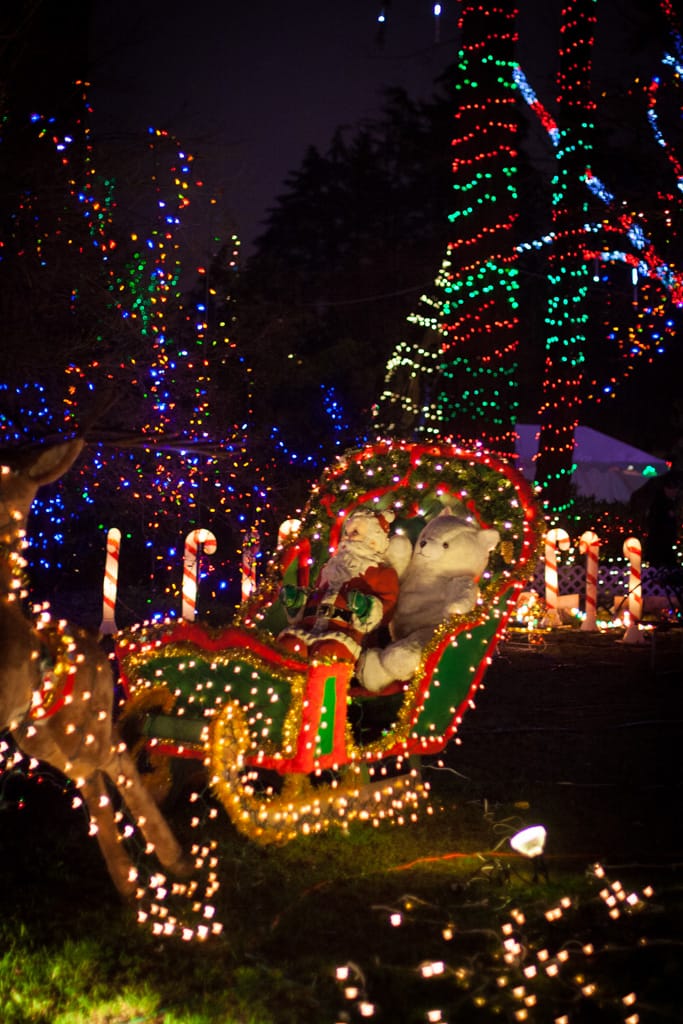 I’d been on it once many years ago (1999, I think), though I remember little of it now. (There’s much of 1998-early 2000 that is foggy, for a number of reasons.) I’m fairly certain, however, that I had gone on a rainless evening, as there was no way I could forget how miserably cold and damp one feels while waiting to get on the train. 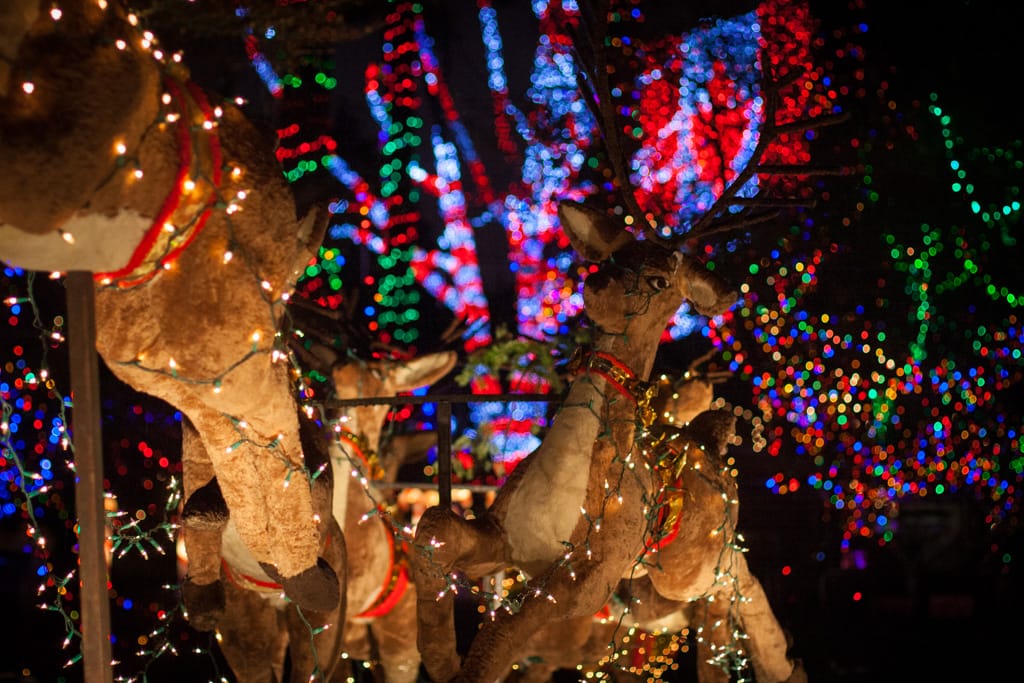 I had pushed into the line, dragging Alex and the kids with me, thinking that we had a defined slot at which to board. As it turned out, I’d misunderstood the purpose of the times — merely to stagger the arrivals, and not to dictate a specific start time. As such, I got us into line before Nikki had even arrived, and the plan had always been to ride as a family. Alex, the kids, and I ended up jumping out of line on the station platform, waiting for the others to catch up.

They were running three trains that night, so the line went surprisingly quickly. Each of the trains carried upwards of 50 people, and the trains arrived and departed about every five minutes. Although we had to wait nearly a half hour for the others to catch up, it somehow didn’t seem too awkward. (We were, at least, under shelter.)

The train is small, and you have to be careful getting on. Alex clocked her head rather badly on the car’s roof, and I felt like a sumo wrestler trying to get on with Choo Choo strapped to my front, and the diaper bag on my back. (Choo Choo would not like the ride much at all, as I think she was rather hungry and not getting what she wanted.) And then we were off, listening to the dulcet tones of Anne Murray.

The lights were strewn about the train’s route, which is a 10-12 minute course. Some of the areas were decorated with Christmas-themed scenes, some religious and most not (including, no joke, a set from SCTV’s Great White North, with a track from Bob and Doug’s album blaring over the speakers as we passed — I couldn’t resist a few "coo-loo-coo-coo-coo-LOO-COO-COO" refrains, myself).

By far the most impressive part was when we exited the "national" tunnel (with black light diagrams of every province) into the "Niagara" area (which doesn’t have anything to do with the Falls) and saw lights draped over every square centimetre of ground, tree, and shrub. That area alone must’ve taken weeks to set up, and the payoff was fantastic.

Despite the relatively slow speed, the cold, damp air made for a chilly ride, and we were none to upset when we finally reached the end of the line. Carefully disembarking, we hurried back to our cars, and drove off towards Gastown. Part 2 of the evening, notably dinner, was meant to be at the Old Spaghetti Factory.

Sadly, that was the least thought out part of the plan, and we found a 140 minute-long wait instead. Nikki, working near the Gastown area, suggested Vallarta, a nearby Mexican restaurant as a backup. No wait whatsoever, and we were soon eating.

But the kids were going down. Choo Choo had already been extremely upset about waiting to eat while on our way to Gastown, and Monkey was trending into the "wired from being up too late" zone. We made an effort to eat quickly so we could head back home.

Back at the Aicken farmstead, the fireplace was stoked, warm clothes were donned, and hot drinks consumed to help warm us up from the penetrating cold we all seemed to feel. Tomorrow is plan-less, save for the Christmas Eve activities.

I’m excited to be this close to Christmas. Not for the obvious reasons: I know I’m not getting the things on my list. But I am getting to watch this year’s festivities through my kids, which is definitely something to look forward to.