During one of her many perusals of the local newspaper, Jean (aka "Granny") came across an ad for "North Pole, BC", billed as a "gateway" to the North Pole via Maple Ridge. (Perhaps not the most obvious place to teleport to the top of the world, but just about as likely as, say, Spuzzum.)

So Jean arranged for us all (having to buy tickets being a big factor) to visit Santa in his own home, and witness a bit of a behind-the-scenes approach to Christmas.

Even if, y’know, it’s above zero, all green, and the only snow to be seen is on the mountains...

Timberline Ranch, a "non-denominational Christian" horse camp for kids runs the event, which is located at the very north of the Maple Ridge District, past the end of the paved roads, and pretty much right at the foot of the coastal mountains. It was about a 45 minute drive, not counting the time we had to wait for a grader to finish smoothing out a section of the aforementioned unpaved road.

It’s hard to miss the decorative "North Pole, BC" sign awaiting all at the gates. The North Pole bus stop awaits just after the parking lot, and almost immediately you’re met by elves. (The "elves" are high school and university students, dressed in appropriately festive and elvish red-and-white stripped tights, with red and green frocks.) They check you in, and then — much like a bus ride — you wait for your scheduled departure. 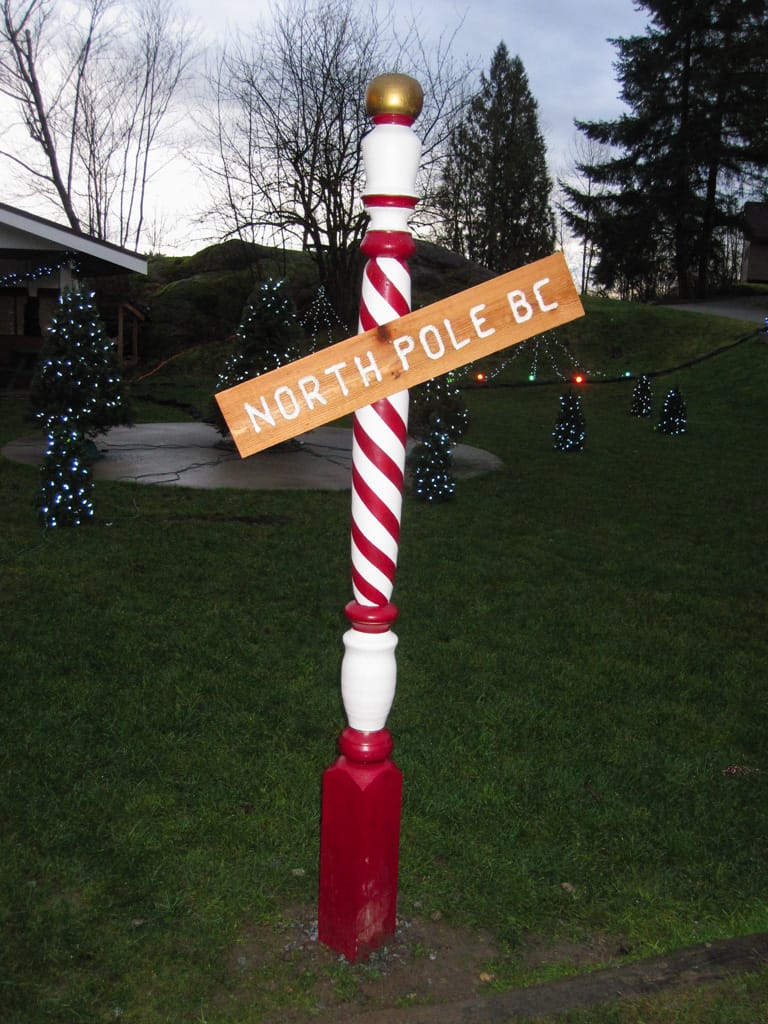 They group together several families, and you travel in a group. First stop? The gift shop, oddly enough. That one puzzled me a bit — you typically exit through a gift shop, not enter. (For the record, we exited a by walking down a path.) Form there, up a pathway, past the "elf wishing tree" to the Post Office. (The various buildings were actually bunks used for summer camps, heavily decorated to be something else.) There we all hustled in to await the first pseudo-event.

Monkey, it seems, had far too much for breakfast, and the three helpings of porridge were weighing heavily on her belly, causing her to declare that she was "bored" and "tired". (Alex and I quickly declared that one serving of porridge would be enough in the future.)

The elf running the post office first had the kids (ranging in age from only a couple of months up to about age five) find a couple of letters that had been "misplaced". Then the kids got to have their letters "approved" for mailing (placed on a scale to determine if they asked for too much), before being trucked back outside and have the letters put in the mail.

The second stop was the Elvern School of Secrets, where the only male elf in the group (which we would later find out was a theatrical student — a complete non-surprise given his very over-the-top performance) gave the audience a three-step lesson in being an elf. I can’t tell you about that, though, I’m sworn to secret. Though I can say that poor grandpa got suckered into reciting the oath while on one knee.

Then it was off to one of the elves’ favourite activities: ice fishing. In lieu of frozen water was well-carved styrofoam and magnetic fish. Every kid got a chance.

Next up was the toy workshop, where the slave labour portion of the tour kicked in. (You think Santa makes all these toys himself??) Every kid got the emptied fabric shell of a white bear, and was encouraged to fill it with stuffing, and bring it up to the "head elf" to be registered. (The bears were later for sale, wrapped, with the child’s name already attached.) Then it was into Mrs. Claus’ cabin for storytime. 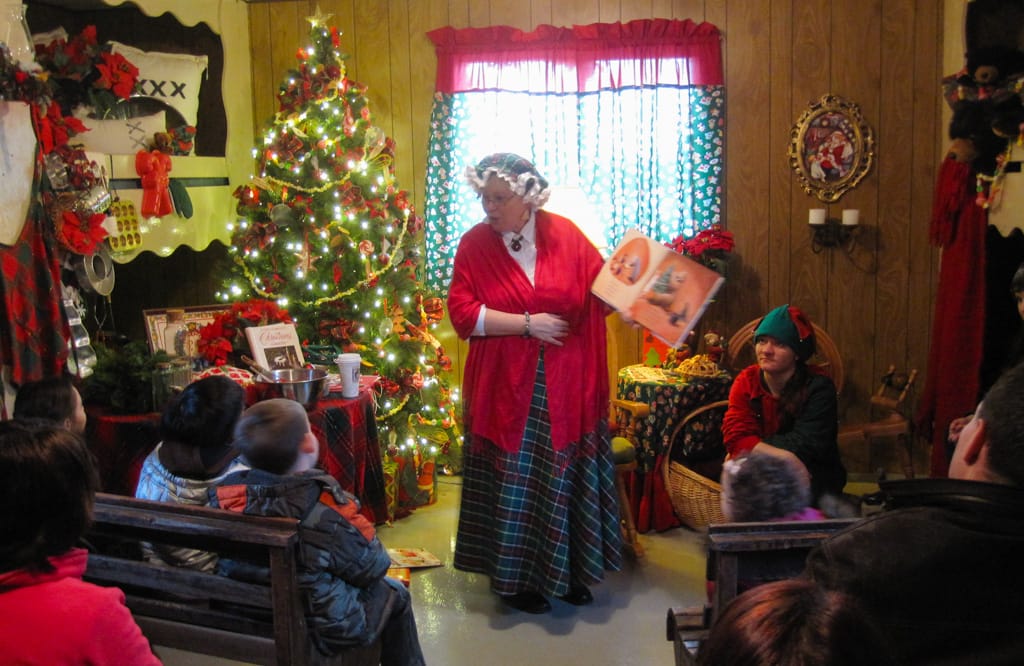 Finally, it was time for the Big Man himself. This is where I really have to hand it to the North Pole, BC operation. Considering this is supposedly a first-year operation, it’s handled as professionally and smoothly as a Disney experience. (Someone’s done their research!) There are actually two Santas at work, both secreted in cabins such that the kids don’t know that there’s two of them, and each family has actual private time with Santa, rather than having to feel like the typical mall assembly-line.

To accomplish this, the group was divided, and two families (including ours) were whisked away to "Club Eggnog", a little play area in the basement of the main ranch building, to play while waiting our turn. Monkey seemed to get more and more excited to see Santa, but I harboured the suspicion this was all bravado. When we’d gone to the Santa in Chinook Mall a couple of weeks ago, she’d bailed at the last second and only Choo Choo had sat on Santa’s lap. Still, Monkey raced up the stairs, and ran ahead of us as we went to see Santa.

But as the door opened, the "wait a second" look crossed her face, and suddenly she didn’t want to go in. (Called it...) But with a little gentle coaxing, and a promise to hold a hand, we managed to get her to at least enter the cabin. By then, Santa, clearing having seen this dozens of times, helped Monkey into the cabin, and ultimately to sit down with him. From there, she was fine, and freely told Santa her life story (as well as what she wanted for Christmas — thankfully, Jessie remained on the list).

We did a quick round of pictures, one with just the kids, then with the parents, and finally the grandparents. Monkey waved goodbye, said "thank you", and we headed back outside.

We had lunch in the cafe (on the main floor above Club Eggnog), before heading off for a pony ride, which Monkey had been promised. The sky was darkening quickly (it seems to get darker here in Maple Ridge earlier than it does in Calgary), and we headed home after Monkey had a couple of laps around the riding barn.

Both kids were asleep before we got to central Maple Ridge.