Besides being the penultimate month of the year, November is also "Movember", a campaign where men are encouraged to grow moustaches and raise money in the on-going fight for prostate cancer. I’ve known about the movement for a few years (if you live on the internet, such as myself, it’s impossible to not know about it), and had managed to avoid doing anything about it.

It’s not that I don’t support cancer research — naturally, I do. It was just that I had no particular desire to grow facial hair any more than when I get lazy and don’t shave for a few days. (When you’re trying to get out the door in time to get the bus, you take whatever shortcuts are necessary.) This year, in a desire to have some unity with my fellow Evans-Huntians, I let it start growing out.

Sadly, that’s about as far as I’ve gotten.

The theory is that you’re also supposed to campaign, and collect donations on behalf of your team. (Evans Hunt’s team is known as the Lip Pixels.) So far, I’m the only one on the team who has nothing to his name. Nada. Not a penny. Why? Well, if you follow this blog, or my twitter, or friended me on Facebook, you’ll see that almost all of my communication can be boiled down to three things:

So what does that mean? Simply — I’ve put zero effort into Movember. It’s not that I don’t care — I do, really! — but my priorities weigh very heavily on my family and my job. That, and I get easily distracted by shiny objects, so that when it comes down to me being more responsible towards the community … well, I kinda blew it. Here we are, almost three weeks in, and this is my first note out. Technically, I don’t even have a moustache. 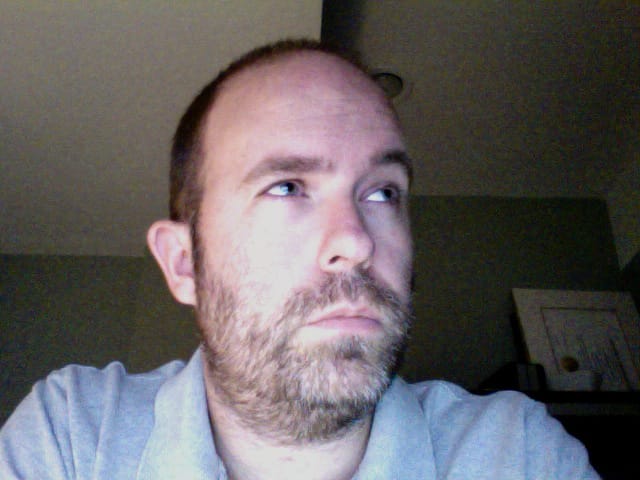 Alex hates it. My kids shy away from it. It’s itchy as all hell.It’s like a freaking sponge, so drying it out is hard (and now that it’s freaking cold, a wet face means ice), and I’m sure if I keep this thing any longer, some wayward bird is going to hole up in it for the winter.

One of things that truly bothers me about Movember is one of the tag lines:

Every man deserves a little bit of luxury.

LUXURY?! Who the hell things having HAIR grow out of your FACE is luxurious?! That’s seriously demented, if you ask me. It’s a right pain in the … well, face! It’s a nuisance, I feel ostracised, and about the only good thing about it is that (and I know this from university, when I sported a beard for a year or so), beards make those cold winter winds less nasty. But that’s it, folks!

So why do I have a beard instead of a moustache? ‘Cuz way back when, I had this grand scheme where I’d throw out the idea that I, personally, would raise $1000, and the highest donator would be given the opportunity to decide what the moustache would look like, and in the last week, I’d shave it to that specification.

Yeah. Amazing how plans go to pot when you’re utterly sidetracked by stuff you have to do. (Witness the time of this posting. This is the first time I’ve had to actually think about this.)

So this is my (rather pathetic) plea. If you haven’t already donated, it would be really keen if you could offer up a few bucks, I won’t feel like such a loser. And hey, if I happen to somehow pull down a grand, someone gets to tell me how silly I have to look for a few days…