That "first" Hallowe’en was largely missed by myself (sadly — traffic was not daddy’s friend that night), and your experience was limited to what the mothers at Avalon could put together. From what I understand, fun was had by all. But it wasn’t the same as going door-to-door, saying "trick or treat", and loading yourself so full of candy that you don’t know what to do with yourself.

I gotta say, you made me proud tonight.

We sort of started for Hallowe’en a few weeks ago when we went to the Calgary Corn Maze. We bought a pumpkin that was destined to be the one that sat out in front of our house tonight. However, while at the Calgary Farmer’s Market on Saturday, Mommy and I decided to buy a couple of more. After you kicked another pumpkin, Monkey, we ended up with three. (In the end, no matter the appropriateness of your actions, four pumpkins proved correct.)

Mommy was on the prowl for you, as well, and found a cowgirl princess costume. For Choo Choo — no, Mommy didn’t forget you — there was a pumpkin outfit. Sadly, Choo Choo, you didn’t get to do much tonight. You were in the stroller, thoroughly pissed off at the utter lack of attention you were getting towards getting to sleep. (You’re not sleeping right now. You’ll sleep at night ... mostly ... but napping during the day is driving poor Mommy insane. We can only hope you grow out of this.)

We carved up the pumpkins this morning after breakfast. Since we had four, it made sense to carve "self portraits" into them. That was Mommy’s idea. But instead of actual pictures, we went with something more symbolic — a monkey for Monkey, a choo choo for Choo Choo, knitting needles and yarn for Mommy, and (of course) an Apple for me. 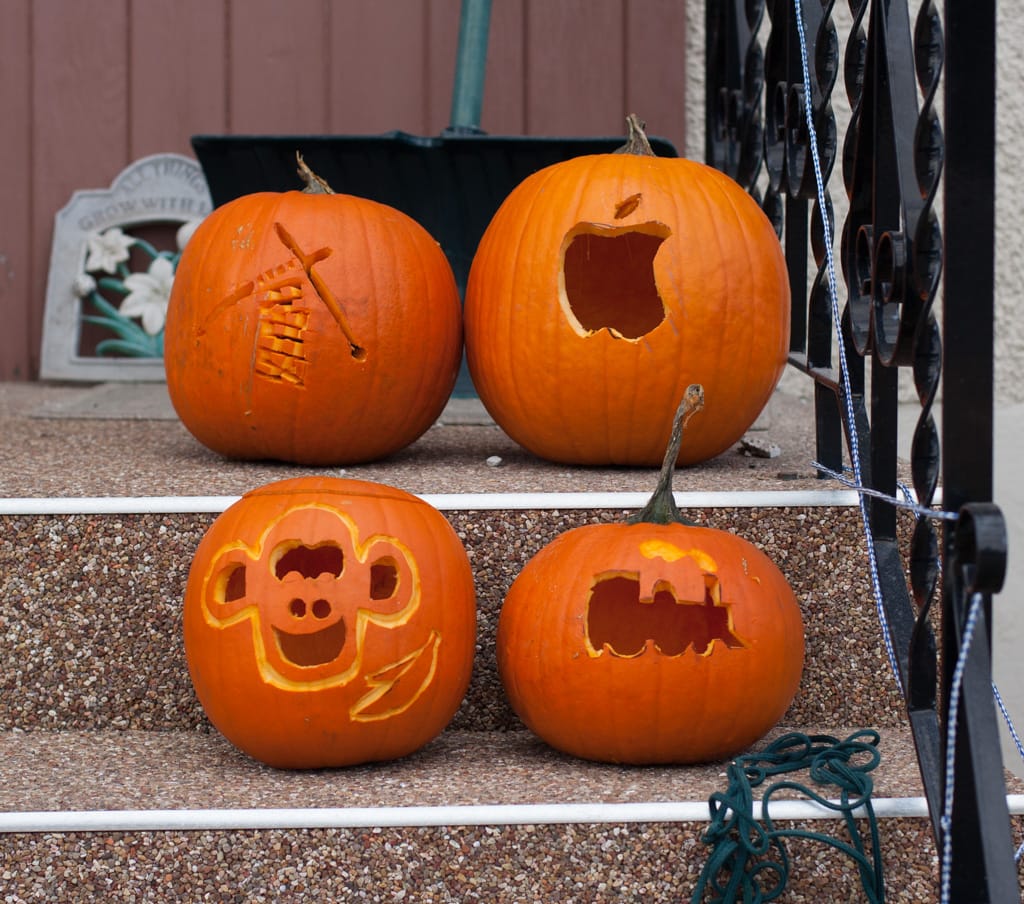 Then we trucked off to Westbrook Mall so you could trick-or-treat there for the first time. You practiced your "trick or treat" very well, and we soon unleashed you to the unsuspecting store clerks. You needed the odd reminder, but generally were very good about saying both "trick or treat", and "thank you" when you received your candy. And considering you were one of the few kids (young kids, at that — I was surprised at the number of older kids) who travelled on their own, you showed no shyness, and seemed to be respectful of lineups. 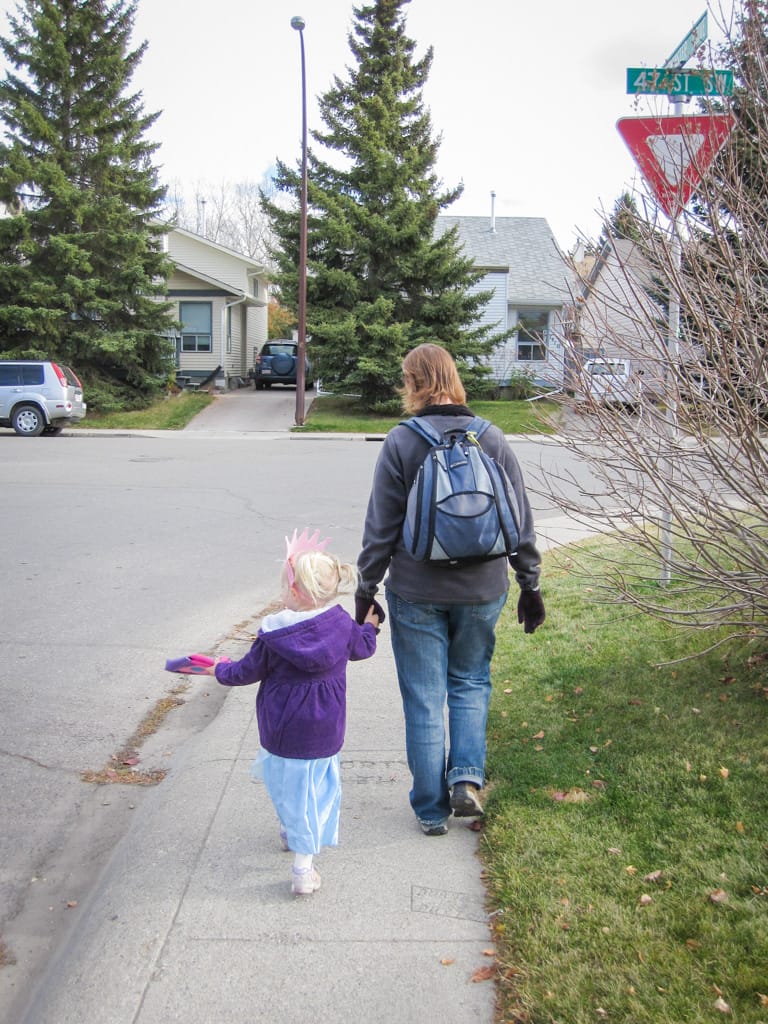 Choo Choo, you would have loved trick-or-treating. But you were wetting your diaper. Sorry, but that’s just the honest truth.

We had pizza with Nana and Grandma, who watched the house and gave out candy to the total of 14 (possibly 13, there may be still some debate) kids who came to our door. Then the four of us, Choo Choo in the stroller (and crying) headed out to the second house down the block, where you rang the doorbell, and said your first evening, in-the-dark, wearing-warm-clothes-under-your-costume (a very Canadian thing to do) "trick or treat".

You literally ran away from that house exclaiming, and I kid you not:

That scene was repeated another 10 or so times down one side of our little crescent street before Mommy and Choo Choo headed home, and you and I tackled the other side. Many times, you would turn just as we’d turned up a walkway, and said forcefully:

I’m going by myself. You stay right there!

Next year, with luck, both you and Choo Choo will be able to go, since Choo Choo should be walking by then. We might not get far with the both of you, but it should make for a very cute evening. We’ll have to start thinking of costumes that would for the both of you.

Given the fact that you went out with just a small basket, you did surprisingly well. And that so few kids came to our house only means that Mommy and I won’t be raiding your supply this year. Though if I can make one suggestion for next year: learn how to do an inventory. 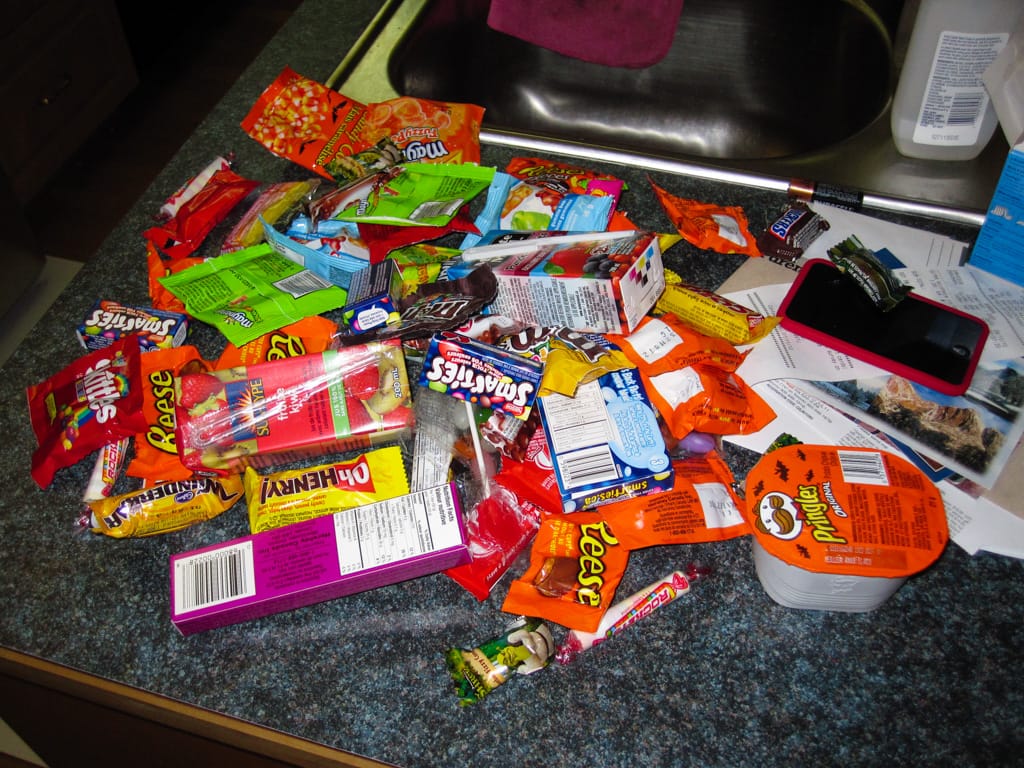