One of the many things we identified with our home as needing improvement when we purchased it was the windows. Nearly all of them (save for an odd bay window added on an extension that seems to have gone on in the 1980s) dated back to the house’s original construction, in the early 1950s. Single pane, and no matter how much foam you jam in there, fairly drafty. 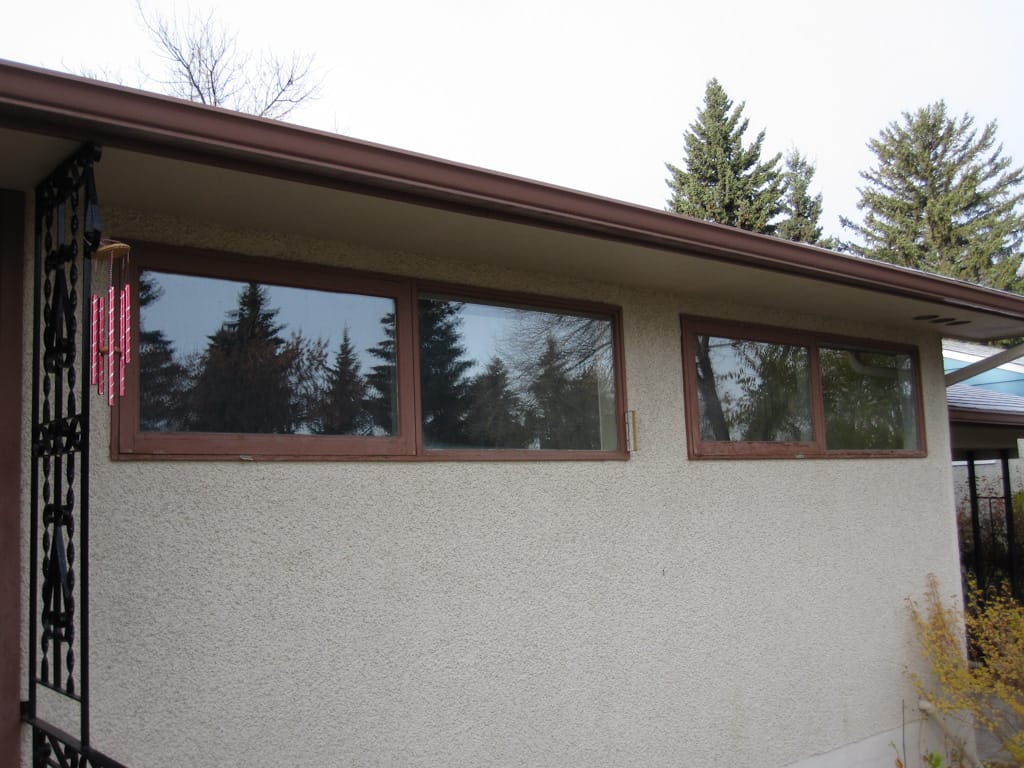 Our first winter in the house, we used that fancy shrink plastic to improve the draft-factor. To a degree, it helped, but the rooms still felt cold. Last winter, the rooms were outright frigid. And after Choo Choo’s window displayed signs of mould, Alex and I started talking much more seriously about replacing the windows not as part of a larger renovation, but for a sense of urgency. 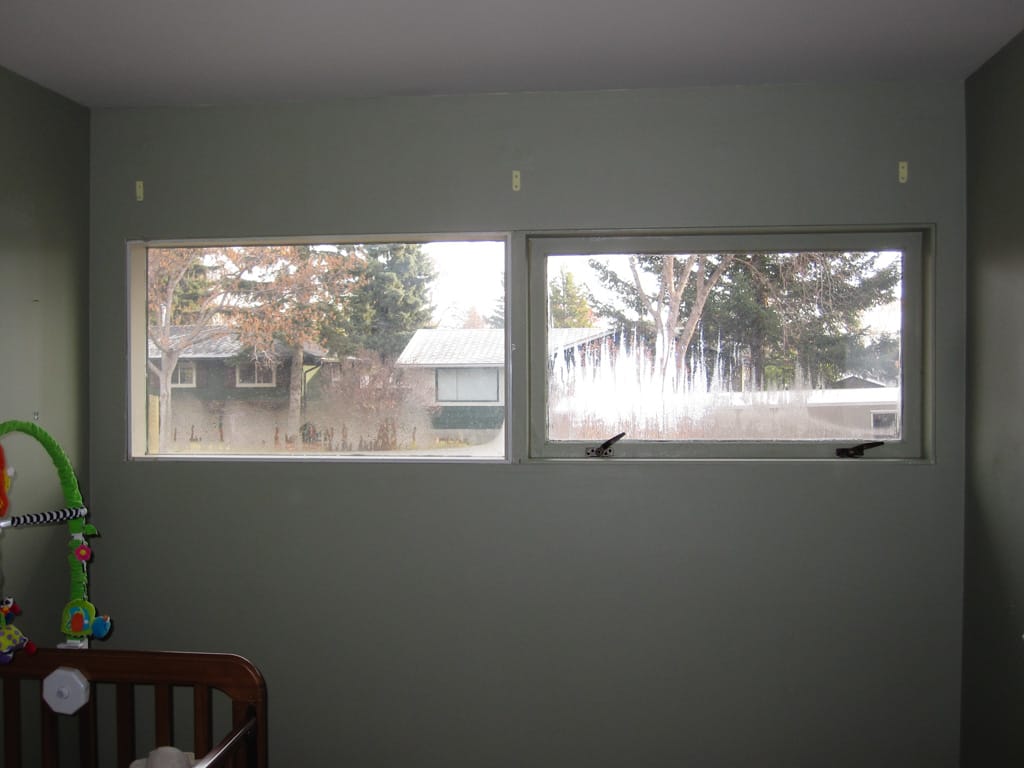 Urgency finally arrived today. And boy, do they look spiffy!

Believe it or not, they’re Sears windows. No, not Kenmore — just arranged through Sears Home Services, which covers a surprisingly wide array of home improvement needs. In this case, estimators who come out to see what you need, arrange for local contractors to do the work, and order the windows through a Kelowna company called NAD.

Windows, for the record, aren’t fun. They’re extremely expensive (new cars cost less), and choosing the right style and model can produce some serious hand-wringing. Do you have hung windows? Sliding? Casement? Awning? Each has their own advantages, as well as increases in cost. Double-pane? Triple-pane? And do you keep the same size, or do you make the windows bigger?

What we had naively thought would be a 30 minute conversation stretched to nearly two hours as we wandered through what seemed like countless options. (And never mind colour. That’s another ballgame. We went with white, by the way, for sheer simplicity.) Part of it was Alex and I arm-wrestling for window size — I’d wanted an increase, to improve the light situation, where Alex just wanted to replace the things and get on with life. I’d grown up with huge windows in my bedroom, so I’m very partial to large windows. In the end, we compromised on the kids’ rooms — each got windows 12″ taller.

Earlier this week, I got a call from Walter, the installer, who said the windows had arrived (much earlier than we’d expected, I might add — we were told "November"), and could he come on Thursday and Friday to install? Frankly, I wasn’t too keen on being home again this week (I was already at home yesterday awaiting a new stove delivery — that’s another story), but it seemed like the right thing to do.

Sadly, the "right thing" ended up being "too busy to do my job" (there is a certain fallacy that working from home is more productive than at an office), as I spent a fair bit of time roaming up to see how the work was progressing. But first things, first...

The first crew arrived just after 10:00. Yes, first. Due to a cancellation, we ended up with two crews at the house, all of them scattered about on pretty much every window at once. That was an unexpected twist, since we’d planned for two days, and expected just the kids’ rooms to be done today. (Good news: the work is done. Bad news: had to spend more time getting the other rooms ready.) 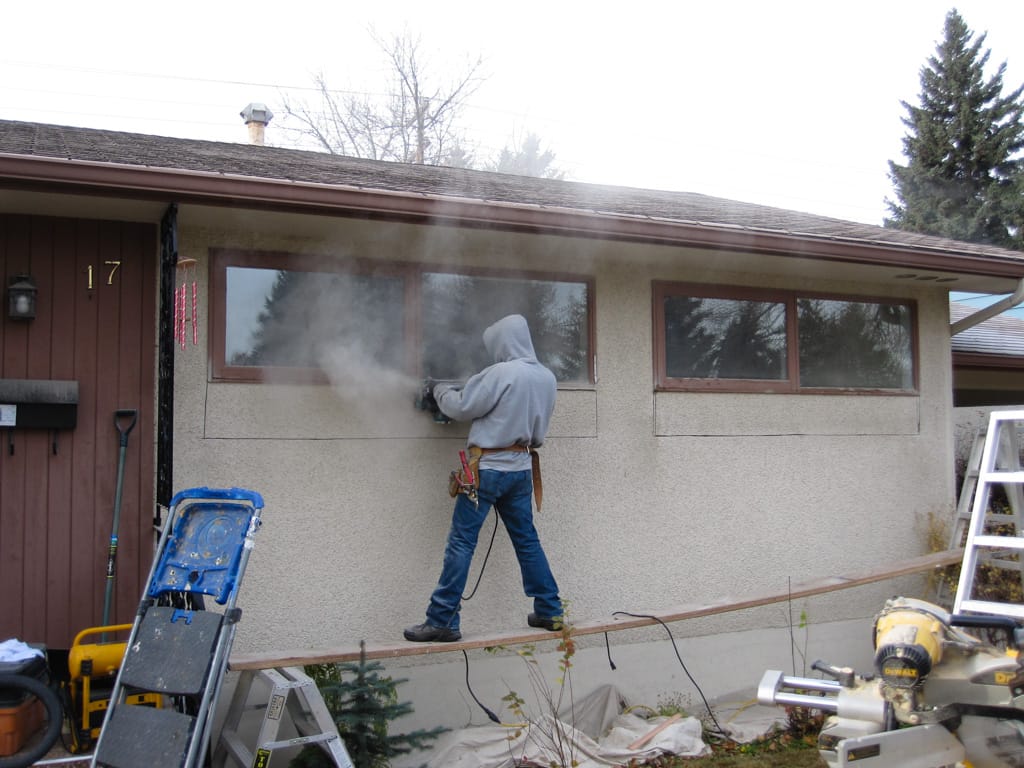 The first window out was actually the ensuite, since it’s the smallest and easiest to get at. While one guy tackled that window, two guys were working on the kids’ rooms. For that, they had to cut open part of the wall (remember, they’re 12″ taller, now), including cutting off the stucco on the outer wall. (One bonus of the work — it proved definitively that there is actually insulation in the walls.)

By the time the first of the kids’ windows were out, the ensuite and master bedroom windows were fitted into place, shimmed and all. Alex and the kids (and I) had retreated to the basement to stay warm (the basement has a separate heating system; the upstairs heat was shut off to keep the furnace from running constantly). The largest window — the living room — was the last to come out, and remained out for the better part of two hours, leaving the upstairs in a veritable deep-freeze (it was quite cool in Calgary today).

It wasn’t long before the interior trim was set on the bedrooms, and the living room window was shimmed in. It started to feel more homey. With the insides complete, the exterior casing was installed (with a healthy dose of spray insulation between the house framing and the window) and caulked for each window. 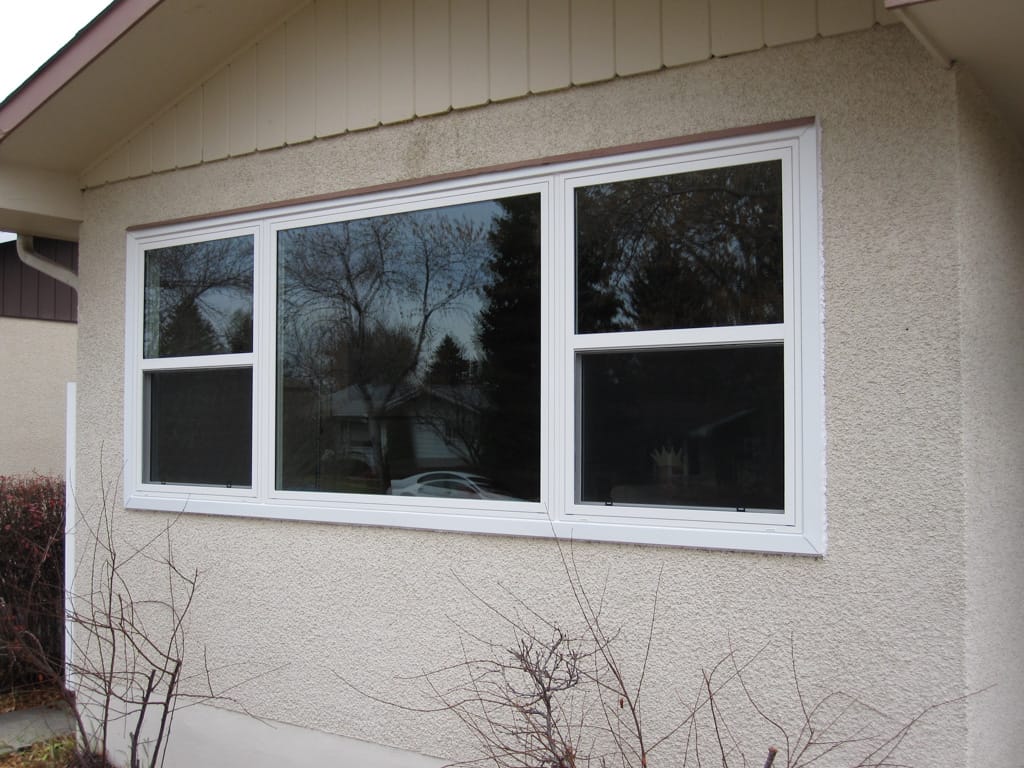 As the job started to wrap up, the second crew headed off, leaving the first guy who arrived, and Walter (the crew chief, and primary casing installer, it seems). The two of them finished of the rest of the work, departing shortly after 17:00. But before they left, the Monkey had to tell one of them "thank you", for she could now see out her window (while standing on her bed, mind you). She seems quite happy about that. 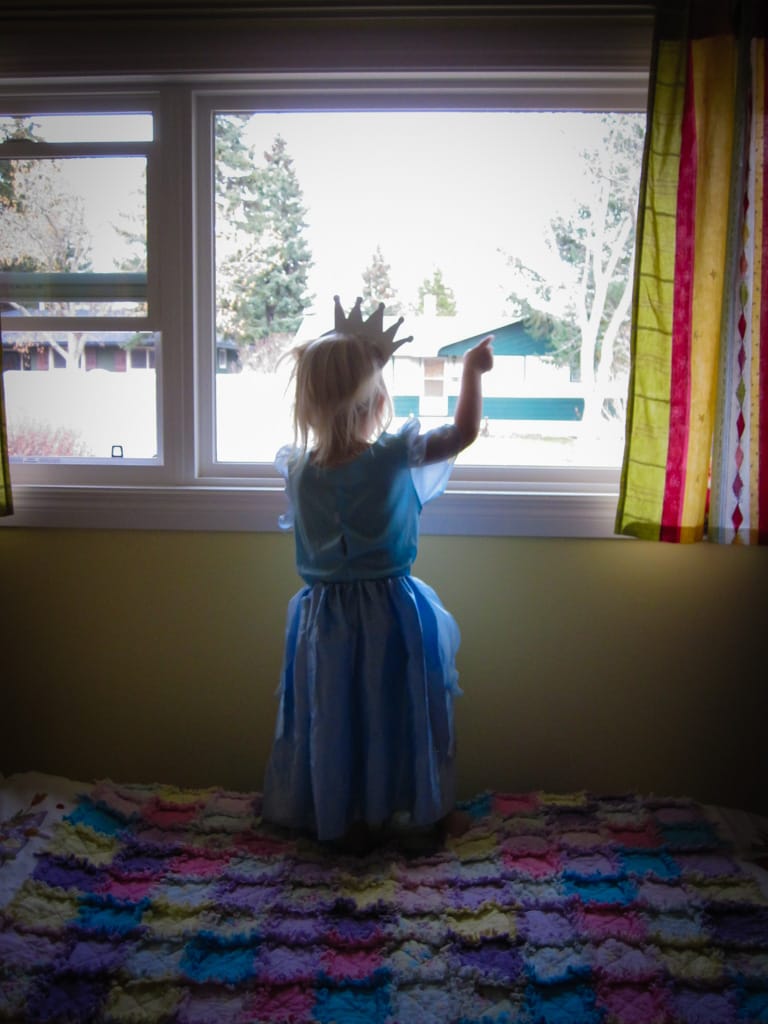 Already the house seems much better, as the old windows not only looked tired, but were quite cold. The new windows are cool to the touch (it’s cold outside, remember?), but not freezing. The draft is considerably less (I hesitate to say "eliminated"), and hoo boy does it look a stinkload better.

The best part? The all open. That was a requirement. I hate windows that don’t open. Security aside, my biggest beef is when we can’t get airflow through the house. Next summer, windows will be open a lot!

The only problem now? We need new curtains.