Okay, it wasn’t just Alex. Truth is, our "Florida Ceiling" bothered me from the moment we bought the house. In our original walk-around, it was one of the things I noted as needing "urgent replacement". I personally found it rather hideous, and cast so much light into the kitchen as to be a little overwhelming. 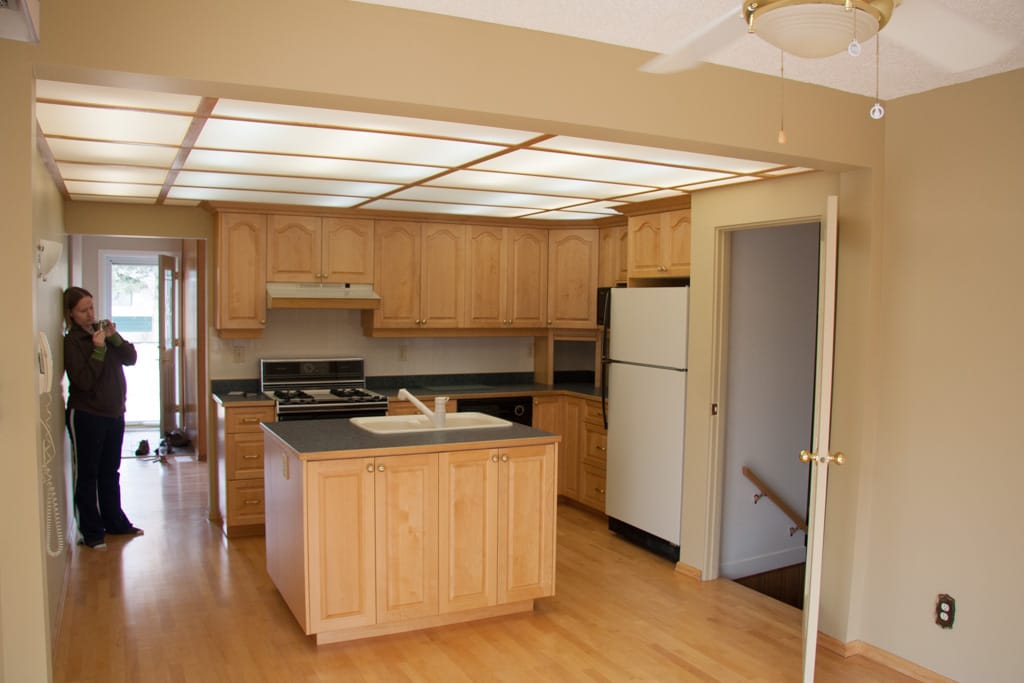 I’d hoped today’s job would go reasonably quickly. After all, I don’t want to spend the entire day tearing things apart (although it is terrible fun) and putting in new things (admittedly, rarely ever as much fun), when I could be ... well, doing other things.

As you might have read, on Monday past, Alex and I had bought lights for the kitchen. Installing them wasn’t straight-forward, mostly because the Florida ceiling had to first come down. After our weekly visit to the Calgary Farmer’s Market, I got down to the job of destruction.

Taking down the Florida ceiling revealed a few things. First, the diffusers that made up most of the ceiling actually blocked a fair amount of light (we’d taken them down last weekend, mostly to see what kind of mess we were getting into, and it almost felt like we were getting a tan when the lights were on). Second, the lights had been manufactured in 1982, which likely meant the ceiling went in about the same time. Third, the guys who installed the ceiling cut a number of corners to get it done (wiring exposed, no proper wire clamps). And finally, my personal favourite, they used the ceiling to cover the fact that they hadn’t bothered to paint over the original ceiling colour (a teal, since you asked) or the wallpaper. 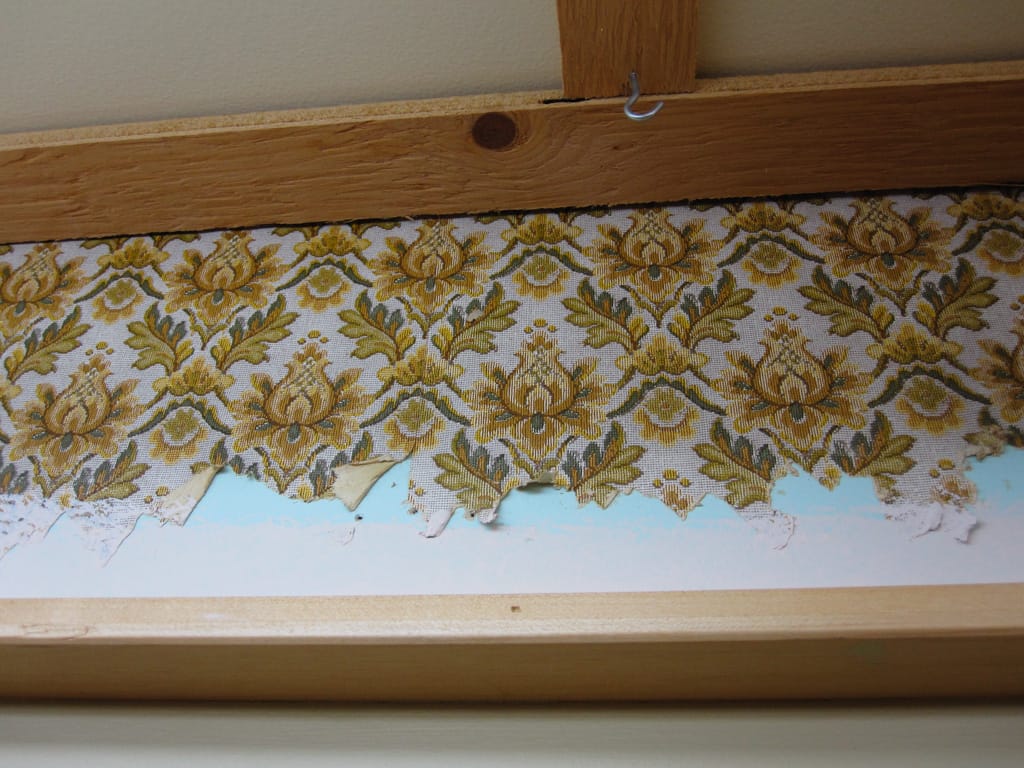 The Florida ceiling had four basic parts: the wood lattice frame (by far the most attractive and well-built part of the ceiling), the diffusers, the light fixtures (15 double-tube fluorescent lights), and a whack of wooden strapping to give a place for the lights to be held to the ceiling. The lattice came down not too badly, the lights in an huge bunch, and the strapping with a crowbar. 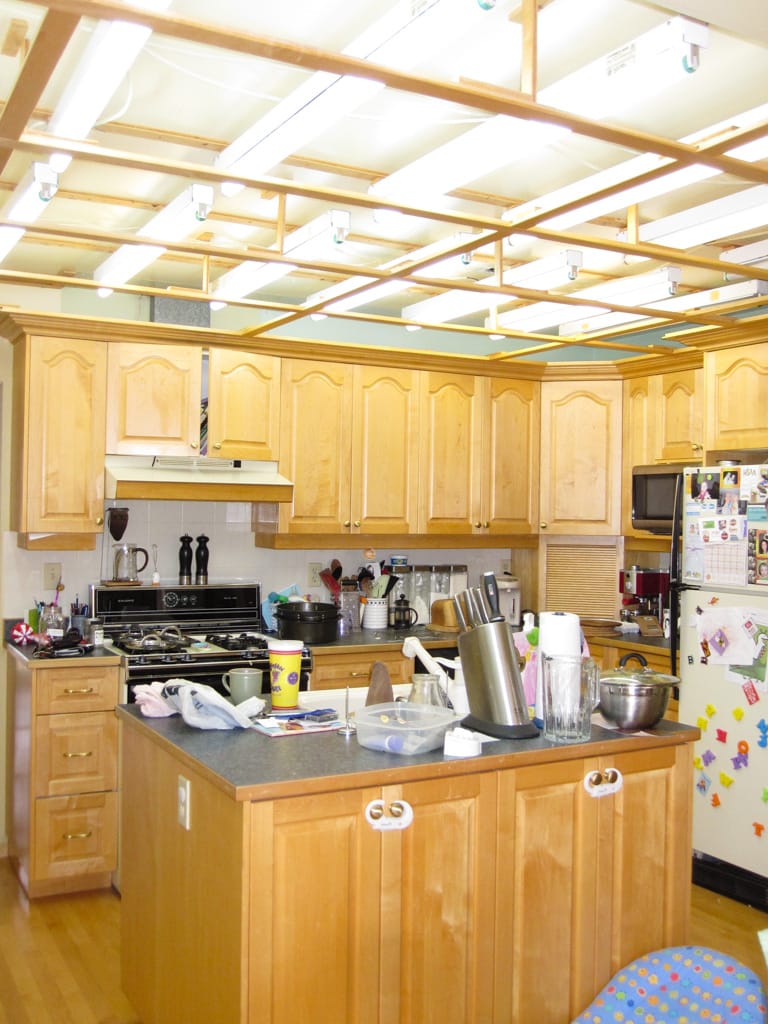 By 14:00, the kitchen was a mess. It was another hour before it was in a state for the next step — hanging the new light. The new light is a combo pot light/pot rack. Pulling the new light out of its box, it was clear I needed to make another trip to Rona — I needed an octagon box, and a pair of heavy-duty hooks to hold the rack. 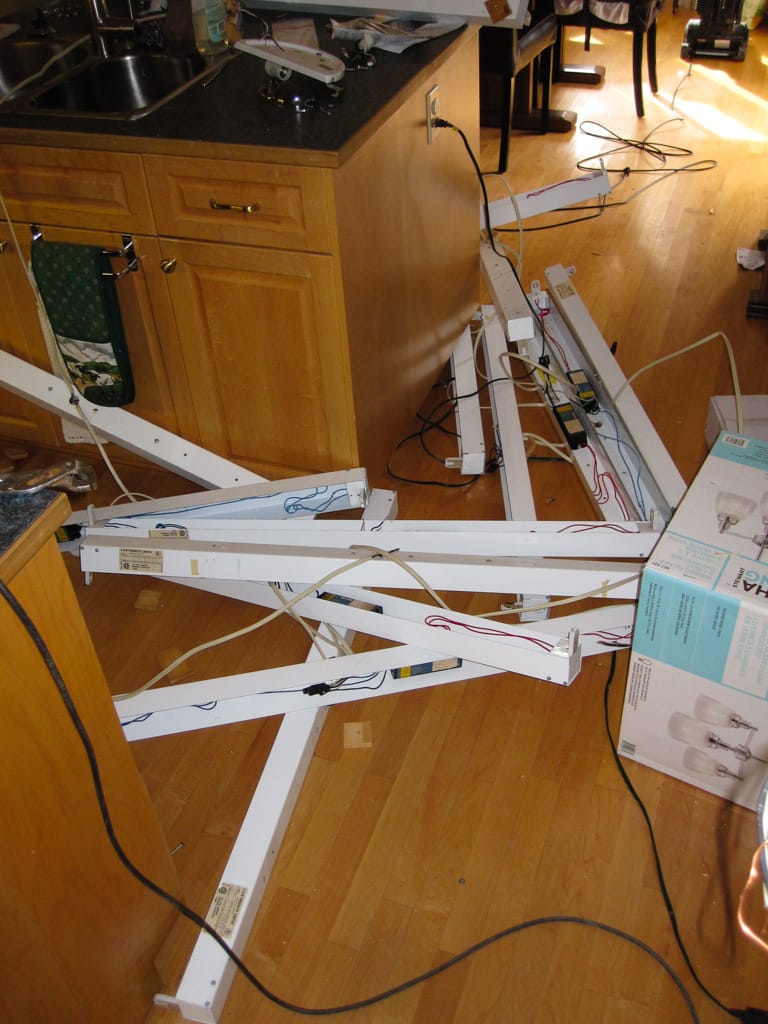 I know what you’re thinking — shouldn’t the rack have come with the hardware to actually hang? Well, kind of. The "hardware" they provided was a reinforced mounting plate that would hook into a normal octagon box (though the manufacturers also recommend you reinforce the octagon box), and then hang from that point. My issue is that we wanted to actually put the pot rack to use — awfully darn hard to use it when it’s not well-secured.

Shortly after 16:00, the hooks were starting to go into the ceiling. #6 gauge, 5/16″ threading, and about 4″ long. More than enough to hold up this wee beastie, I thought. Sure enough, a test hang proved that the mounting was good. Next came a hole cut into the ceiling to install the octagon box. That’s when we had the next big surprise...

Wood chips. Actually, wood shavings. Insulation. Old stuff. I’d never seen insulation like that before. It poured out of the hole, and all over the island, and into the sink. Thankfully, I saw pink fibreglass insulation above it, so I wasn’t as worried. Soon the box was in, and there was only one thing left to do — have a fibreglass bath.

I’d crawled around in the attic in the house I grew up in a few times, following my dad up into the space to do a number of different things. So going up into our attic didn’t really worry me. I found very quickly that, unlike my childhood home, I couldn’t walk (crouched) in our attic — I had to crawl. And I barely fit under the wooden struts. There’s not a lot of room in that attic.

I found the wires I’d pushed up from the kitchen, and spliced on new wiring for the pot lights. I also threaded new wiring to three repurposed fluorescent lights that now rested on top of the cabinets, to provide some general lighting from above (the potlights are directed onto the island — there’s not a lot of spillage). Even with a mask, long sleeves, heavy jeans, and a tucked shirt, I felt horrible the entire time. (A hot shower helped, but I still feel itchy.)

I took an hour break, having dinner and watching Ice Age with the family (it’s movie night), resuming once the kids were in bed. The hookup went well, and soon the potlights were lit. About thirty minutes later, the above-cabinet lights were working, too. 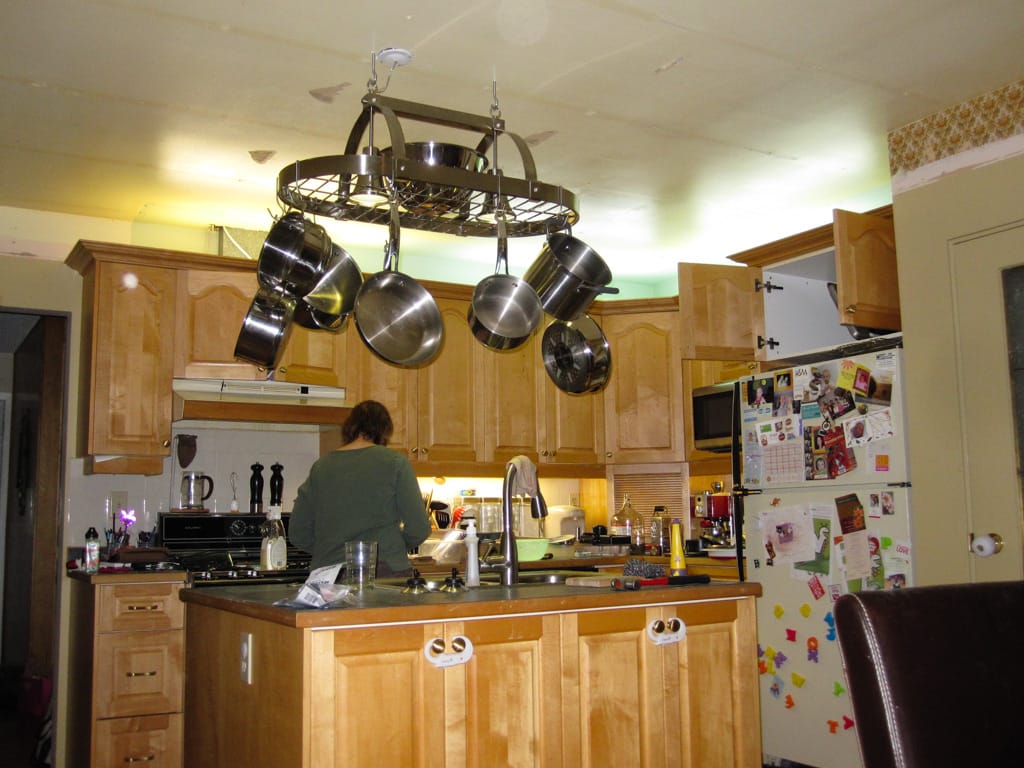 The kitchen now looks and feels a lot better. I think a lot of that is because the ceiling has been raised, and the extra space makes the kitchen feel more open. I also far prefer the indirect lighting that isn’t nearly as bright as it was (I’m dead certain our power bill should drop as a result). The ceiling, sadly, looks like crap now, but we’re going to hire someone to put in a knock-down ceiling to match the one in the dining room.