It’s been a long time since we’ve done anything significant to the house. The last time, we gutted and rebuilt the basement, a much-needed effort. It is now the most comfortable and pleasant part of the house (except maybe the utility room, which is in need of some shelving, and maybe some spackle, tape, paint, a ceiling...). That leaves the upstairs as ... well, as needing some "love". And by "love", I mean a few walls removed, rooms rearranged, bathroom(s) redone, and a much better light transfer.

But that’s a long time away. We’re talking a major improvement, which we can’t afford right now. So we’re going to start with the room that bothers Alex and I most — the kitchen. It’s too small, dark, and frankly doesn’t work well for us. (That, and I’m constantly comparing to our home in Garrison Woods, which had a kitchen that I loved.) As the saying goes, you gotta start somewhere.

So I threw out the sink.

The old sink bothered us. It was a yellowing, easily-stained double sink made of porcelain (so I discovered when I lobbed the piece of junk into the backyard) that we constantly struggled with. It was never quite big enough, and we were always cleaning it — ALWAYS. Just not attractive. The faucet was total garbage and needed to be replaced anyway. It was high on our list of "must do" items. 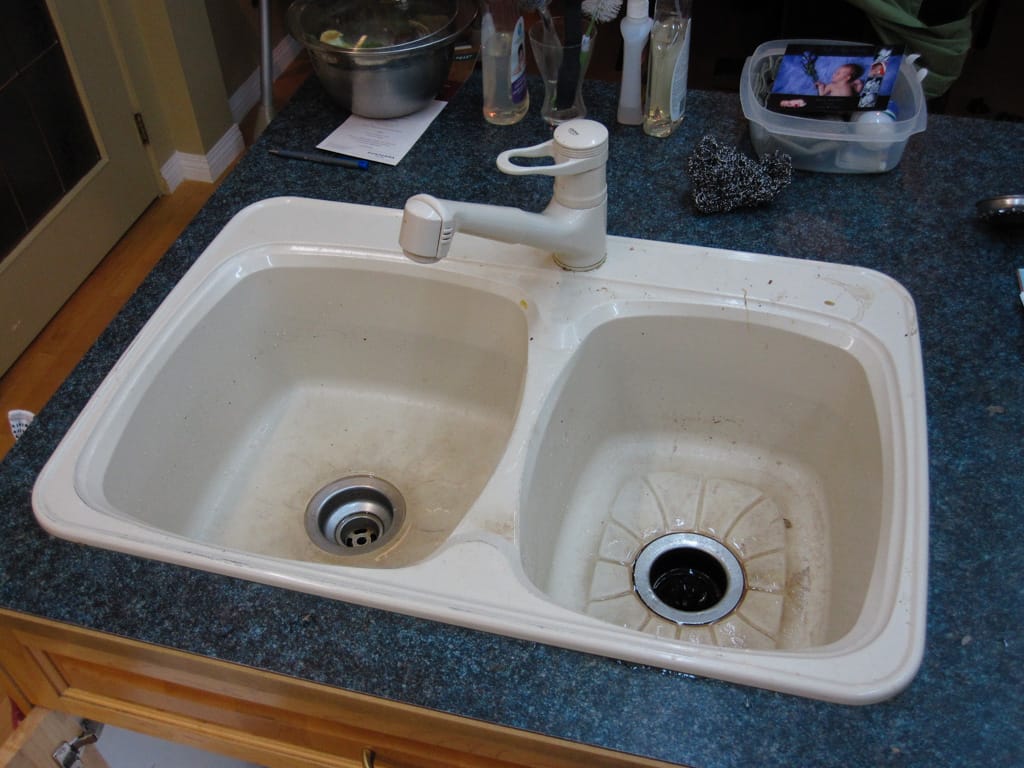 It was also one of the ones I could start on first. The lighting is also quite doable, though the Florida ceiling will require most (if not all of) an entire day to rip out and replace. The sink, at least, I could do in an evening, if I had all the right parts. That was part of our first trip out to the Rona yesterday morning.

The trip, sadly, quickly exposed all the things we hadn’t completely thought through yet. The only thing we walked out with was a suspended pot rack with built-in lights (destined to hang over the sink island, and get our pots out of the all-too-small drawers). Frustrated, we sat down to figure out the next steps.

That led me on my next trip to the Home Depot over at Chinook. (As much as I would prefer to buy at Rona, being Canadian and all, the one in Westhills is just too darn small and lacks the selection.) Acquired: one light for the dining room to replace the ugly-as-sin fan + light fixture, one three-bulb directional light originally intended for the kitchen (but will be likely deployed in our bedroom to remove the even-uglier-as-sin chandelier), one double-sink that measured to the same dimensions as the existing sink, one new faucet, several pieces of PVC piping and connectors, and some PVC cement.

Installation waited until after the kids when to bed. As much as I would love to show Monkey what I was doing, she’d have constantly been underfoot, and likely playing with the insanely sharp things I had laid about to get everything into place.

I started at 20:00 (by coincidence, I assure you) by first verifying that I had a sink that would fit. (I didn’t want to be in the position of having removed the old sink only to find the new one didn’t fit.) Then I cut the piping from the sink, removed the garburator (which we didn’t want), and had to turn the water off to the entire house (for some reason, the cold tap under the sink sprays when turned off). Total removal time: 45 minutes.

I figured I could do the new install in just over an hour. Sadly, having never installed a sink before, I grossly underestimated the trickiness of the project. Namely:

This is one of those extremely rare situations when men get to pride themselves on not throwing away the things (included tools, nuts and bolts, plastic ties, squeaky toys, etc.) that get thrown into the installation kits for appliances or IKEA furniture sets, and having a set of tools that mostly don’t get used. In my case, it was two short (about 4″) punched-metal double-ended wrenches (be damned if I can remember from where), my electric drill/screwdriver, and some deck screws (left over from the fence I built earlier in the summer).

It was a total MacGuyver moment. (My dad, despite never watching the show, called me “MacGuyver”. But that’s another story.) I slipped the wrenches between the counter top and the flimsy piece of particleboard that made up the counter frame, and screwed them together on either side of the wrench. To look at it, you’d almost have to call “fate” — there was never a more perfect fit.

Next up, the piping. Thankfully, having a) helped my dad a few times, and b) having watched more than my share of home improvement shows, I knew the basic process to installing PVC piping: dry assemble, and then glue. The trick? I have somehow lost my ultra-awesome pipe cutter. I know I had one, but I haven’t a clue what happened to it. So I had to cut the PVC with my drywall saw. (Hey, it worked.)

Eight cut pieces of PVC, two sanitary tees, one elbow, and a new trap later, I had the assembled pieces of the new drain. Always dry-fit first, folks — that way you can be sure everything gets together. (I had to trim one piece a bit — something I’d have totally blown had I not dry-fit tested.) Then came the tricky part — cementing it in place.

I don’t like PVC cement. Aside from the stink, you have to move quickly. It’s sort of building a LEGO model, then taking it apart and having to reassemble as fast as possible, in the right order, because the bricks will fuse in a few seconds after putting them together. It’s a bit panicky.

In the end, I had to pull pieces together tightly. Somewhere along the line, either my dry fit didn’t seat entirely, or I didn’t pull/push hard enough with the cement. I’m not really sure which. So it’s not perfect (there’s a slight push to one side), but it fits, and as of this morning, tested to be watertight.

Total time, start to finish: 3 hours, 45 minutes (counting the testing this morning). About an hour of that was getting the sink straight in the first place.

That concludes Phase 1 of the kitchen renovation. Phase 2 will likely be the Florida ceiling tear-down, and the light install (and likely in two parts, since I can do the dining table light pretty easily).