We were supposed to go out to a lake near the Ontario border today, but Mommy and I threw up the white flag and declared us all "done". We need a break. Monkey, you’ve been very patient being trapped in the car seat for hours upon hours. We’ve heard "I want to go home" a few times, but we suspect it’s more about wanting to get out and run around than anything else. (It’s been proven pretty much every time we’ve let you out.)

As for you, Choo Choo ... well, I’m not really sure what to make of your thoughts. Aside from the fact that you’re only 4.5 months old, there’s also the consideration that, unlike your sister, you don’t sleep a lot. So we’re never really sure if you’re generally unhappy with being in your seat, tired, or hungry. I suspect at some level you’re probably all three at the same time.

Still it was absolutely necessary that we take the day off and not really go anywhere. So we went to The Forks.

I’d first seen The Forks back in 2002, when I was in Winnipeg with the CBC TV 50th Anniversary VIA Rail train. I’d been quite impressed with them at the time, not the least of which was when I learned of their railway heritage. After learning that the Manitoba Children’s Museum was there, The Forks suddenly became my favoured destination. Mommy felt we should go to a place called Tinkertown, which although further away, had far more to do. In the end, it came down to the fact that Tinkertown didn’t open until noon.

Grandpa and Granny came with us, having decided that they would not go to the cottage at the lake, either. We drove quickly downtown, and found a parking spot right next to the entrance. We all walked around inside for a bit, before we went over to the museum. Here we divided. Choo Choo, you went with Mommy and Grandpa back into the market to look around; Monkey, you came with Granny and I into the museum. You literally ran over to the train first.

The Manitoba Children’s Museum has a train inside it. A real one. Ex-CN 9161, and what looks like a passenger/mail combine, which were (and still are) common on the Winnipeg-Churchill run (which this train was representing). The train no longer works, of course. The museum is closing in September for a rebuilding, and I hope they keep the train — it really is a nice centrepiece, and as a railfan, it would be terrible to lose it. I suppose if worse comes to worse, the railway museum isn’t far away, and I imagine they’d like to have it. 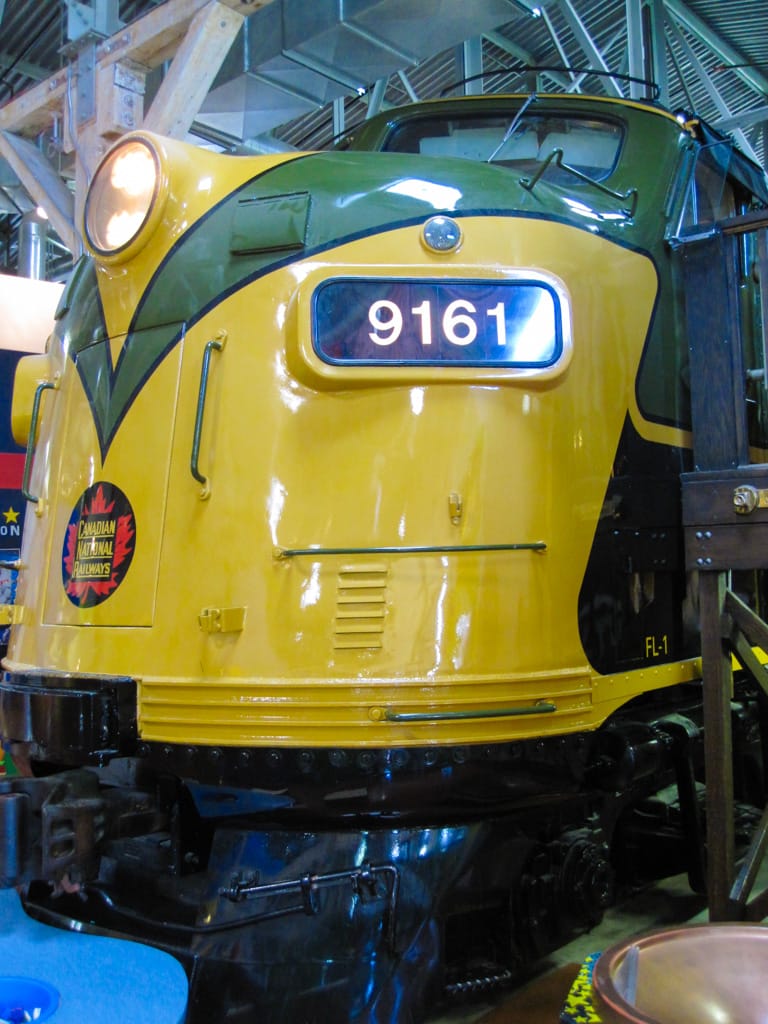 You ran around the train, although you were initially scared to go in the locomotive’s cab for some reason. Then you were off down to the wall of long pegs that you can make impressions with. I found a set of tubes that ran on a blower: you put in a shower loofa in one end, it ran through the tubes (depending on how you set the valves), and it popped out of one of three places. That didn’t hold your interest as long as I thought it would, Monkey.

Around the corner was a big tree that you could climb inside, and come down a built-in slide. You did this repeatedly, and almost made friends with some of the other kids while doing it. Then it was back to the train for a while, when you suddenly realised you needed to pee. You’re getting very good at letting us know when you need to go, kiddo — you’re almost totally free of diapers (except at night).

We had lunch at the market. While waiting for Choo Choo, Mommy, and Grandpa, a busker drew a quick sketch of Monkey with her fingers in her mouth. We offered a donation, and he drew another one of Choo Choo sleeping in the stroller. You had a berry crepe, Monkey. Not quite as good as the one you regularly eat at the Farmer’s Market back home (in my opinion, anyway), but you didn’t seem to mind.

I had a roti. The last time I had a roti, I still worked in Toronto. This was 1997. It was at a place either called Coconut Grove or Crystal Grove (I can’t remember for sure). It was on Dundas Road just east of Yonge Street. The site is now the location of Dundas Square. My friend Mike introduced them to me, and I’d been on the lookout for roti ever since. I was surprised to not readily find any in Vancouver, and I haven’t really been searching too hard in Calgary. So this was a treat for me, and it was very good. Although I will say that goat generally tastes better than beef in a roti.

After lunch, Monkey, you and I went back to the museum for a while. We passed by a First Nations group that was dancing in a circle nearby, beating their drum and singing. You’ve never seen this before, so we spent a while watching. It was very, very hot (even hotter than on the coast of Costa Rica, as I recall) so we took refuge in the shade of one of the sculptures there.

You played with the pegs, ran around the train, played with the chalk, but soon it was time for us to go back. You didn’t want to leave. In fact, you put up a bit of a fight. I suspect that was mostly due to exhaustion. I suspect this because you fell asleep before we were out of downtown Winnipeg, and slept another two hours back at the hotel. It was your first proper nap since we left home.

We all went swimming when you both woke up. We splashed and played. Choo Choo, you seem to like the water — a lot more than when you have a bath, lemme tell ya. We swam for about an hour before we packed up to go have dinner.