Wow, I wasn’t kidding, was I? It was a long day. A really, really, really long day. We were up and running and gone by just after 8:15 this morning, trucking our way up to an RV park just north of downtown along Main Street, right next to Shooter’s Golf (which I am convinced is named and designed after elements of Happy Gilmore). We met up with the rest of the family who were along for the ride, and then planning to meet at the ESSO station in Eriksdale, headed north.

Granny drove with Great Uncle Ken and Great Aunt Marilyn so she "would have all-new material", and likely because after a while, you just can’t stand being around us Sowreys any longer.

At Eriksdale, we stocked up on coffee and a couple of snacks, and then were off again in search of an unnamed and otherwise unmarked access road (I couldn’t even call it a rural road), which would lead us towards the old homestead site. We were working off the collective memory of Grandpa, and his brother (your Great Uncle Paul), and a couple of others who’d been to the site before. In addition, we were also looking out for an old teapot, hung there some 30 years previous by your Great Great Grand Uncle Frank, who would have also been on this trip, but sadly only passed away the day we left home.

I suppose in many ways this is an auspicious trip, though you kids won’t understand that for a few years to come; for you in particular, Choo Choo. You are the fifth generation of Aicken (the fact that you have my last name is mere legality), and this is your heritage. Choo Choo, you’re the most recent direct-line descendant of your great-great grandfather.

We almost didn’t make it. About 3/4 of the way there, we found the road had been flooded by the rising of Stewart Lake, likely as a result of all the rain Manitoba has been receiving this year. We weren’t sure how deep it was, or even it we could ford it. Thankfully, members of the Webster family, who now farm the area, showed to us that the water was really quite shallow, and even regular city cars wouldn’t have a problem. Even then, quite a few people took to the back of Paul’s pickup truck, which was the first across the 500-600 metre stretch. We followed soon after. 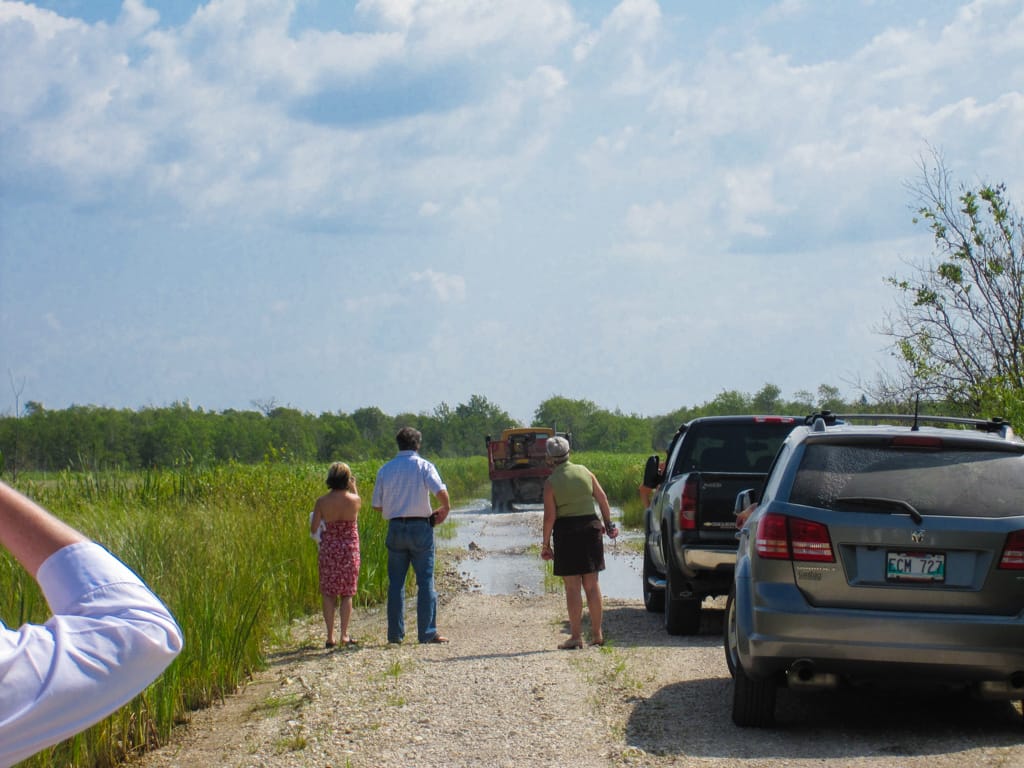 Rounding a few corners, and fording another flooded section, we found the teapot, right where Frank had left it. It’s rusted considerably over the years, but it’s still recognisable. You’d never be able to boil water in it, though. 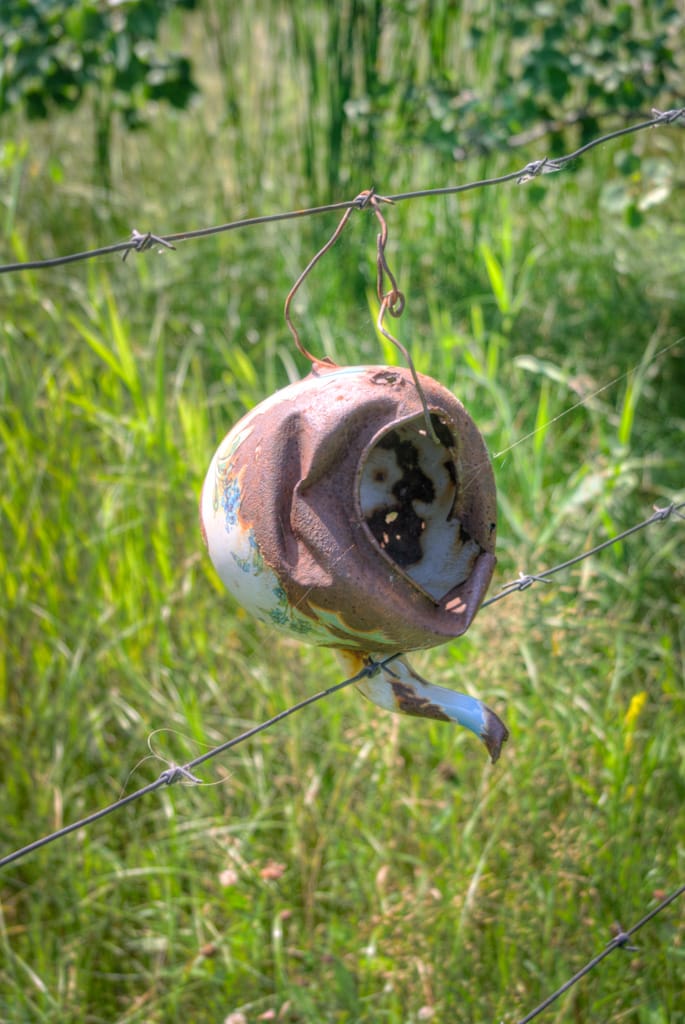 Despite being prepared to be eaten alive, especially by deer flies (I think this scared you most of all Monkey — you’re a bit of an insectophobe right now, except for ants), we saw virtually nothing. All of us, except maybe myself (I can’t really tell) were bitten. Choo Choo has a nasty one on her wrist, but doesn’t seem to notice.

The ground was wet and very marshy, and the near-constant plodding of cows turned the wet soil into a very unstable and icky mess. Still, we managed to get into the homestead site, and Grandpa gave us the tour as he understood it. He even explained a story of some stone markers they’d once found, and now believe to be the grave of an unnamed sibling to Frank, who likely died as a baby. Given their location — roughly 12 kilometres from anything — it’s amazing they lost only one child, and seven lived to ripe old ages. 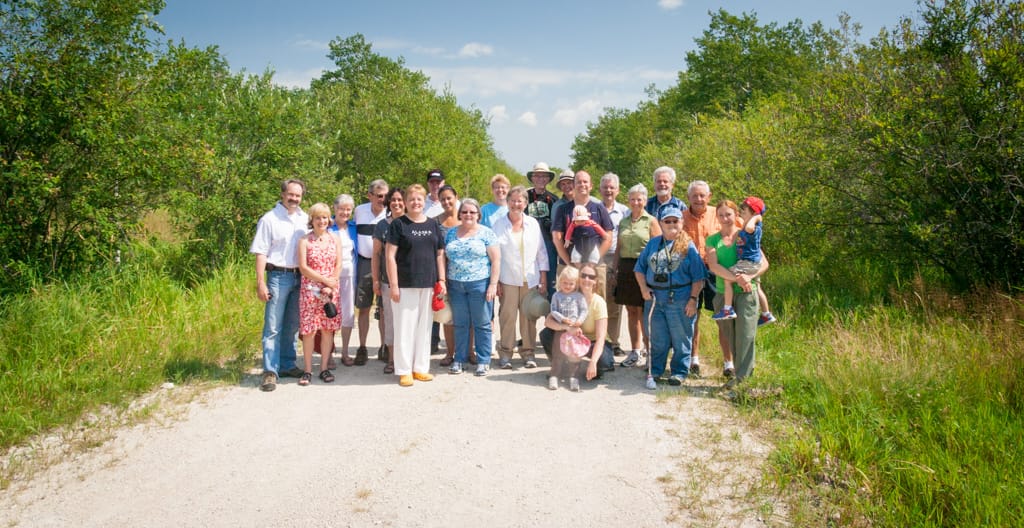 A little further down the road, we came to a corner, where Grandpa said we would find the northeast marker of the original homestead land. There’s a survey pole there, but the plot marker seems to be buried under considerable amounts of grass and mud, and none of us had brought a shovel to find it. A stand of poplars, which thrive throughout the area, offered a fair amount of shade from the heat. It seemed like as good a place as any for a picnic.

After lunch, a group headed further up the road to find the site of the old schoolhouse (gone probably almost as long as the homestead). The five of us (Granny was still with Ken and Marilyn) started towards Teulon, where we would have a big ol’ family dinner. It seemed like a great opportunity for both of you kids to get some sleep — you didn’t get any yesterday, and it showed.

At Eriksdale, I was more-or-less forced from the van to get coffee for Mommy and Grandpa. He drove down a sideroad for a couple of kilometres to keep you both asleep, then turned around to pick up the coffee and me. Then it was off again towards Teulon.

We had a pre-dinner party at Dennis and Daphne’s house, which was a wonderful setting: a huge yard, and lots of space for you to run around in, Monkey. You played with Rachel, Hunter, and Micah, as well as ran around with some of the bigger kids. Hunter shared all her dolls with you. You found a Woody doll (from Toy Story, currently one of your favourites) and were thrilled. Mommy and I were thrilled, too — we got to have a drink!

Just after 18:00, we all took off into central Teulon (basically, right next to the long-abandoned CP Arborg subdivision line), and had dinner at the Teulon Rockwood Centennial Centre. This was the best meal we had since leaving home, and possibly the best we’ve had in a month! (Well, for us, Choo Choo — you’re still breastfeeding at the moment.) Afterwards, Monkey just played with all the other kids. 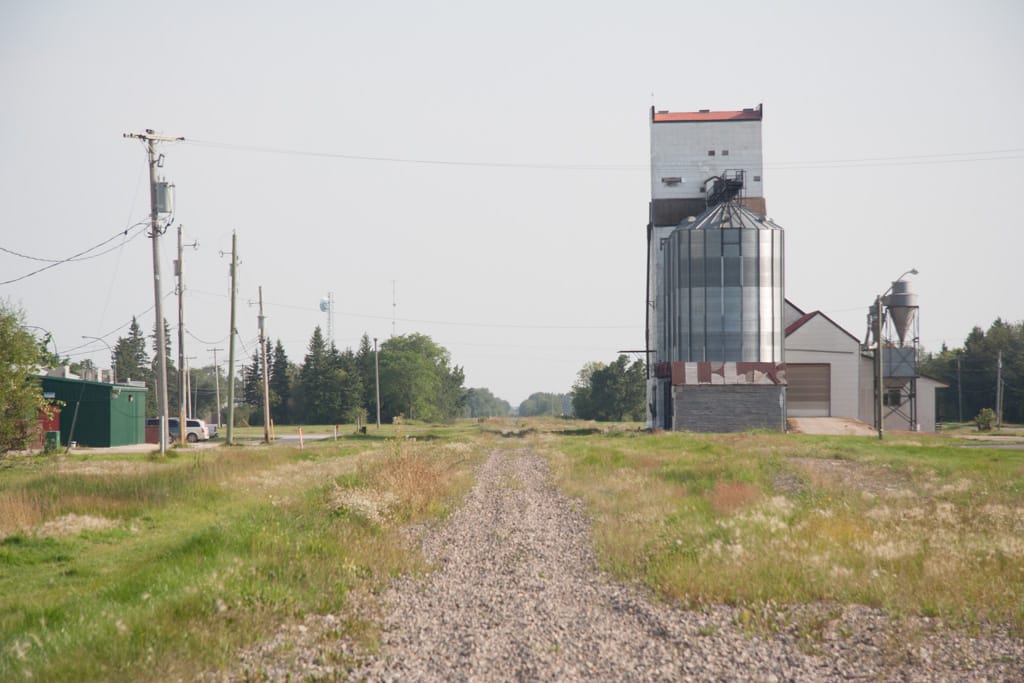 We returned to Dennis and Daphne’s for a short prayer service (led by Grandpa), while you kids ran around. Sadly, that’s when you got whacked in the head, Monkey, and I lost my temper with Micah (after telling him to put the badminton racquets down before he did hit someone). It wasn’t pretty after that, and I was fairly relieved to be leaving after making an ass of myself.

The drive back to our hotel was about an hour. We had to stop at one point because Choo Choo simply couldn’t wait to get back to the hotel for her nightly feed. Monkey, you passed out (as usual) just before we got to the hotel. We unpacked quickly and got everyone to bed. I think we all passed out before our heads hit the pillows.