I sit here at my kitchen table, rubbing the weariness from my eyes. Not the things you’d normally hear from me, mind you — I haven’t been working too hard as of late (as you know, my big project is done). No, this is from something much better — spending time with my family, and notably you, Monkey.

The last four days have been a lot of fun. Maybe even too much fun. Both of us are pretty pooped. You went to bed and for the first time in a long while, there wasn’t hours of chatter from your room. I think you pretty much passed out. I won’t be too far behind you, I think, but I do wish to describe the fun that we’ve shared.

‘Cuz, frankly, I’m not sure how the heck I survived it all...

First off was Canada Day. This year, Mommy and I decided to try a visit at Heritage Park. If you got there early enough, you got a free pancake breakfast. It seemed like a fun thing to do. And it probably would have been more fun if it had been a few degrees warmer — it was rather chilly for the first day of July.

Still, you had a lot of fun. Once we’d gobbled down the pancakes, we went and got ride tickets. You swung on a vintage ship-styled swing, rode the big steam train around the park, went on the paddlewheeler out in Glenmore Reservoir (although you barely stopped moving the entire time, necessitating me following you around the entire time), and went on the merry-go-round (you demanded to ride the white horse).

You ate a pretzel, and drank some frozen lemonade with me. We saw the farm animals (you mooed at the cows, and nearly had your bright red Crocs eaten by a misguided horse). Then we went through Gasoline Alley. By this point, you were tired and got fairly cranky, so we all opted to go home. 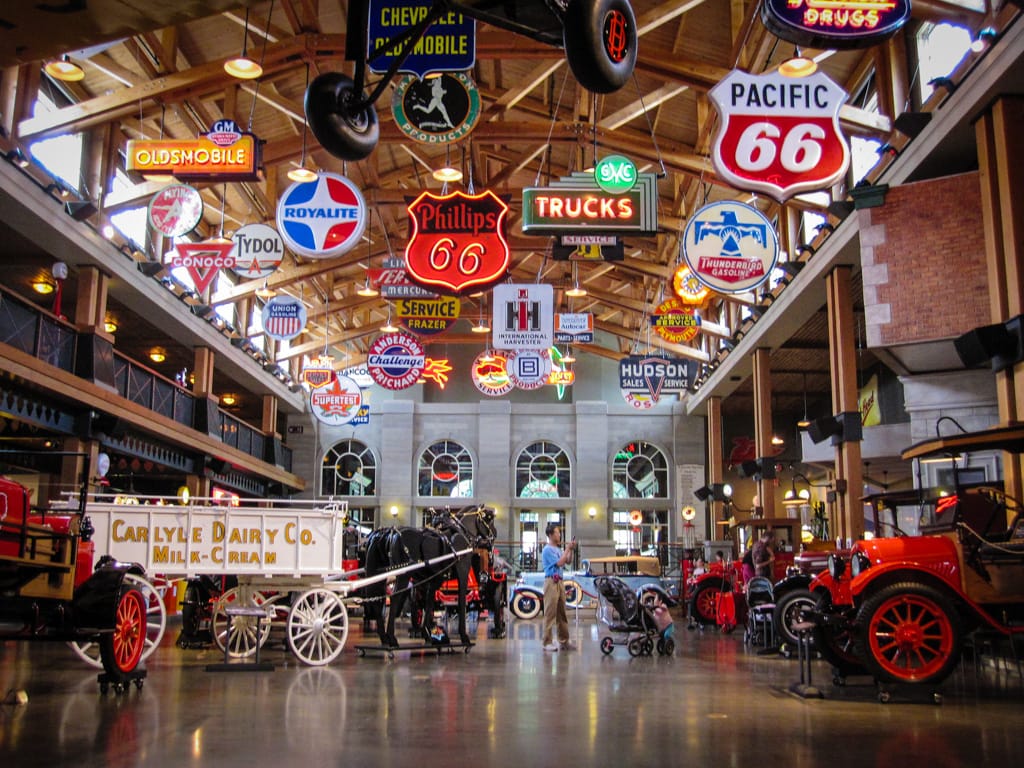 Mommy wanted to go visit with Grandpa for a week, and had to take Choo Choo with her. (Choo Choo’s still nursing, so she goes wherever Mommy goes.) But ... well, Monkey, all me to be rather honest for a moment — travelling with you lately requires a lot of high-test drugs to keep people calm. Either you or us, it doesn’t matter. But Mommy travelling with you and Choo Choo wasn’t even discussed as an option, and Mommy really wanted to go without all of us in tow. (You’ll understand this years from now, when you have a near-3 year old.)

Of course, what all that means is, it was just you and me, kid. And we got off to it before Mommy and Choo Choo’s plane had taken off.

Our first stop was the Galaxie Diner on 11th St., not far from Grandma’s house. There we enjoyed a filling breakfast, because we had a long day of chasing trains ahead of you. I hadn’t chased a train since before you were born, and I was itching to go out and take pictures. I figured you might like to see a big train in motion, and when my friend Graham told me CP 2816 was going out to Banff on 2 July, I couldn’t resist.

After breakfast, we went home just long enough to get a few things together (like my camera), and then we went searching for our first place to wait. I originally thought of a place known as Keith, which is roughly where Stoney Trail crosses the Bow River. But as we came down Sarcee Trail towards the highway, I spied an even better location: where the train tracks cross 32nd Ave NW. It would give me an easy access for photography, a decent backdrop, and not far from the highway to get back out again.

We ended up having to wait longer than I would have liked. One thing you’ll learn, kiddo, is that when you chase trains, you have to be patient and wait. A lot. Even though Graham was sending me text messages on the train’s status, it didn’t come quickly. We saw a freight train have to wait for CP 2816, too. But eventually, we got the note that she was heading west. Before long, we could hear its whistle echo through the valley. It came towards us, barrelling along as fast as it could, belching out black smoke. 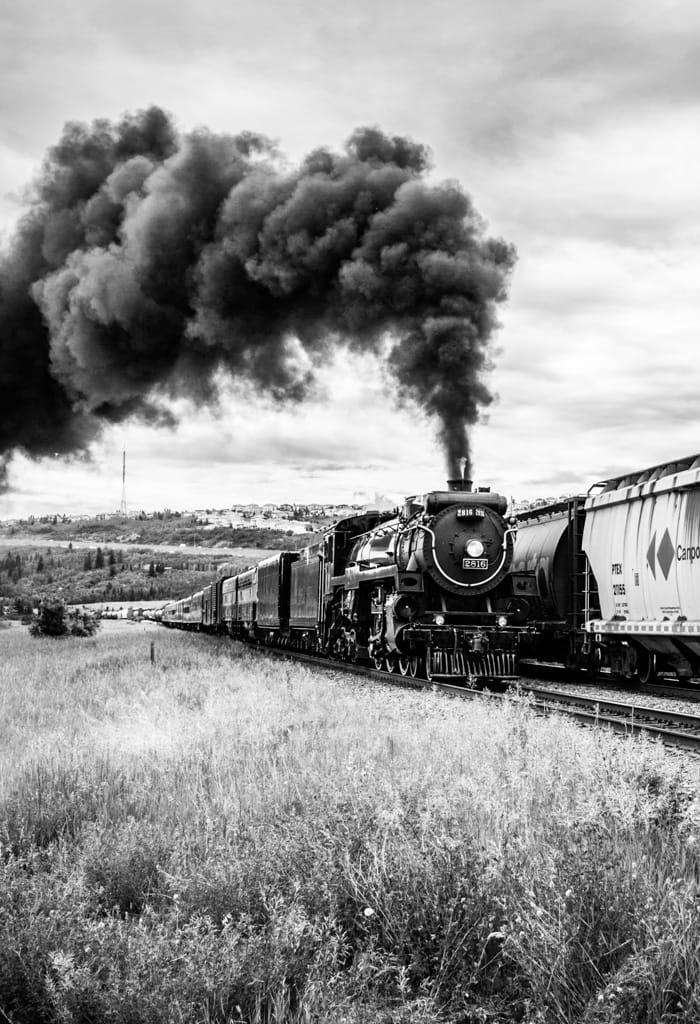 For a moment, I saw myself in you. When I was your age (maybe a little older), your granddad (my daddy) used to take my family (Nana, Auntie Cathy, and me) to the train tracks near our house, to watch another steam locomotive — CN 6060 — come racing by, huge clouds of black smoke filling up the sky. It used to scare the hell out of me. Of course, I look back at that now and I feel really glad that I did see that — it’s a fond memory. I hope maybe one day, it is for you, too.

We hit the road and headed out to a place out towards the mountains called Ozada. You were asleep before we were outside city limits, and slept all the way there. Ozada is on the Stoney Indian reserve, and is one of Canadian Pacific’s old stations for servicing steam locomotives. (The concrete pylons for the coaling and water towers are still visible.) Today, it’s little more than a siding in the middle of nowhere, just off the highway. And we waited there because Graham had told me CP 2816 would be stopping there for servicing as well. 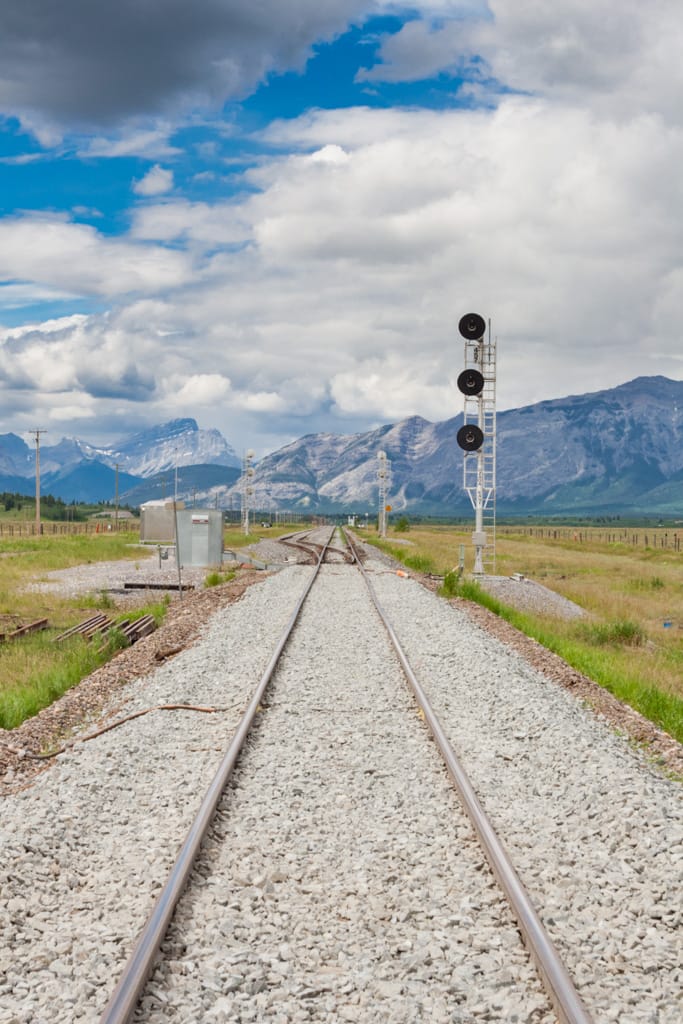 We were not disappointed. We saw the train come in slowly, pass by, and stop in the siding. After it had passed, we drove to the other end of the siding, and watched it race westward. (The train was about two hours late, so they had a reason to move quickly.) We drove out to the highway, and saw the train’s smoke as we drove by it on the highway. We saw some other people we’d seen back in Calgary stop at the side of the highway to take more pictures. 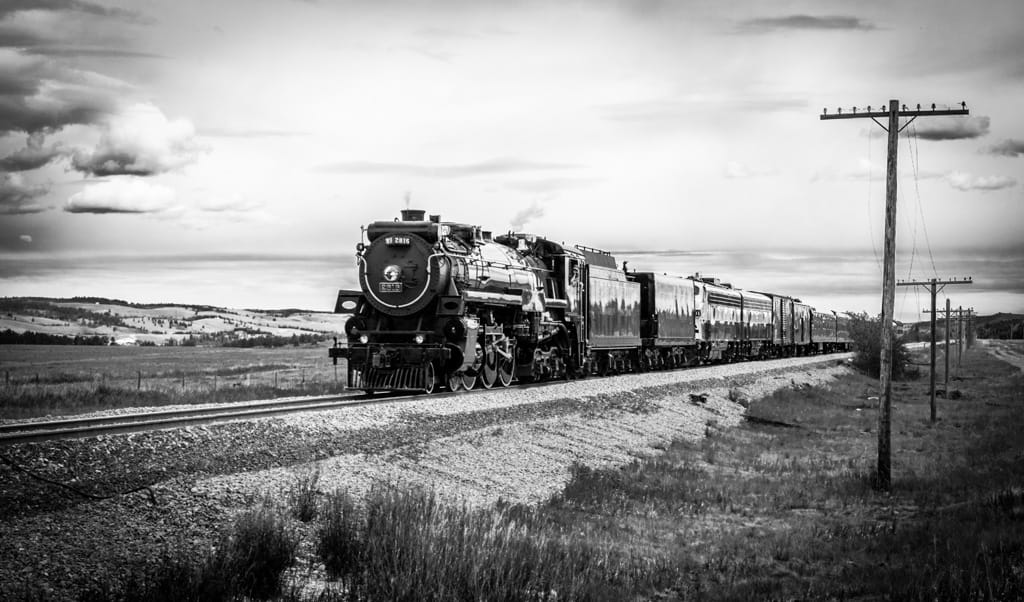 Finally, we stopped in Banff, and waited about halfway between the station and Bankhead. We had to wait a long, long time before we saw CP 2816’s lights. As CP 2816 was going on show at the station, the train stopped again not far from us for one last servicing before going in. This gave us a fantastic view, although the whistles did give you a bit of a scare — they were quite loud. 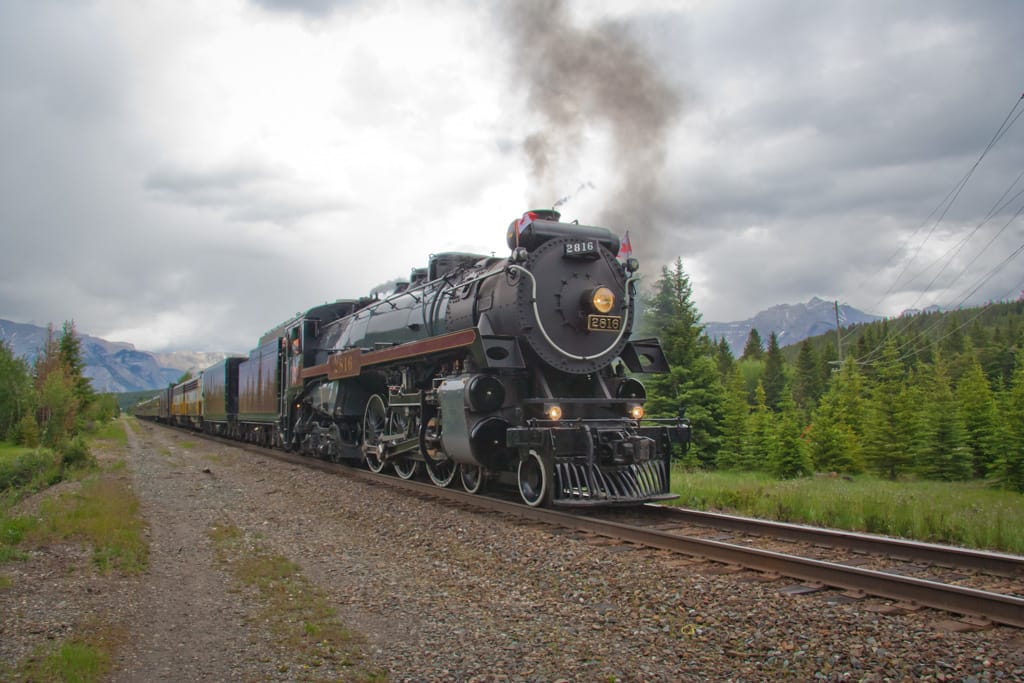 After meeting up with Graham at the station (it seemed only fair to thank him in person for the information), we had lunch at Bruno’s, and then headed back to Calgary. You slept from Canmore all the way home.

On Saturday, you and I went to the Calgary Farmer’s Market, mostly so you could go to the jumping castle — probably your most favourite thing in town (after me, of course). You ate your mixed berry crepe almost as fast as I could eat my ham and cheese crepe. I swear it’s the only thing you eat quickly — everything else requires a pry bar and a shovel...

When I asked what you wanted to do next, you said: "I want [to see the] giraffes!" So off we went to the zoo. We went though the dinosaurs, then over to the giraffes, zipped by the gorillas, and spent a lot of time at the playground (you love the playground, there). Then it was into the Australian pavilion (I was devastated to find that the nocturnal animal area is permanently closed), through the monkey house, and then over to the elephants (where we had hot dogs), zipped over to the carousel (just opened), before going through the Canadian Wilds (where you were completely obsessed with the prairie dogs). 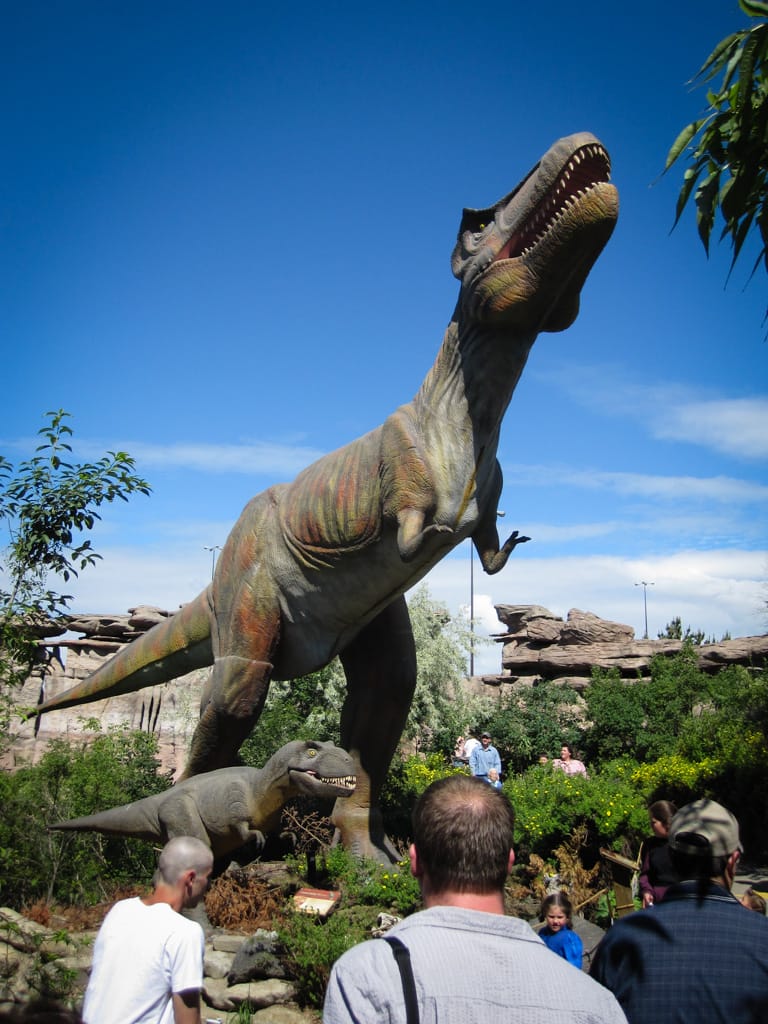 For dinner, I took you to a Japanese restaurant. I found that your chopstick skills had degraded quite a lot — we’ll have to work on that. But you ate half of the edamame, a couple of avocado rolls, and even a piece of hamachi sashimi (well, it was nigiri sushi, but it was just plain easier to give you just the fish). You wouldn’t touch the miso soup (I’ll work on that, too). For your first shot, I was very proud of you.

The next morning, we walked over to the #2 bus stop. You were ecstatic about riding the bus. I’m sure it’s from singing The Wheels On The Bus so much. We went to the Silver Dragon restaurant, where we met up with my friend Tamara and her husband, Dan. There we ate dim sum (Mommy was rather annoyed that we went without her). It was so good. You ate buns, and pork dumplings, and quite a lot of deep fried squid. Yes, you ate squid. I kid you not. Mind you, as I’ve said to others, the squid tastes a lot like scrambled eggs. So I told you it was scrambled eggs. You couldn’t get enough.

Following dim sum, you and I walked along the river over to Eau Claire Market (which really isn’t a market anymore — it’s mostly businesses and empty store space — nothing like it used to be), where you and I saw Toy Story 3. I cried a bit. You seemed to like it a lot, though. Especially anything with Woody. 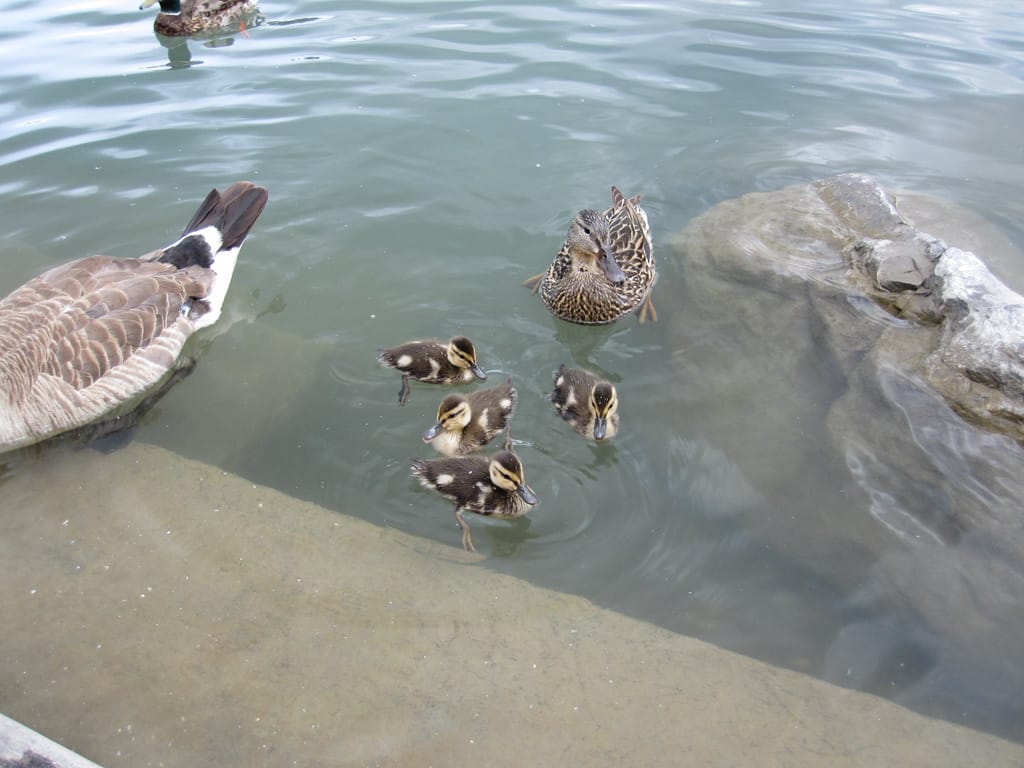 In fact, you like Woody and Jesse (the Yodelling Cowgirl) so much, and because the Calgary Stampede is just around the corner, we walked over to Stephen Avenue afterwards to try and get you a cowgirl outfit. You’ve got the boots and jeans, but you need a hat and a shirt. Sadly, we were less than successful — no-one seemed to have a cowgirl shirt in your size.

On the way home, much to our luck, we ran into Grandma on the bus (she was coming to our house, anyway — we just had really good timing). You had some fun with Grandma while I went off to get something for us to eat for dinner.

In fact, I’m so tired from all of this excitement that it’s taken me a while to write all of this. But I hope you had fun, Monkey. I know I did.