Hey kids, I know it’s been far too long since my last letter. Sadly, it’s that worst excuse of poor excuses: I’ve been working a lot. Back in January, I started with a new company, the Evans Hunt Group. The project has been a tough one (I’ll tell you all about it when it’s ready for public consumption), but it’ll be rewarding for a number of reasons (not the least of which is how much more I know about things in Calgary that you’ll both like).

I’m working with friends, people I’ve known for years — they’re people I also trust implicitly, so I have no reservations about working long hours. The downside, of course, is that I’ve seen less of you two. That’s probably what’s been hardest on me. Especially since Monkey probably feels a little neglected with all the time Mommy needs to spend with Choo Choo. It’s also why, despite the workload, I simply had to take some time to be with you and Mommy, and do something fun.

So went to see dinosaurs in Drumheller.

Okay, Choo Choo, you didn’t really "see" them. You’re only nine weeks old right now, so your observational capacity is limited to something like a metre in front of you. Not to mention that about the only things you do currently are eat, sleep, pee, and poo. (There’s a few moments of alert time thrown in there, too, usually followed by some pretty loud crying when you realise that you’re hungry again.) One day, you’ll find them more interesting, but for now ... well, it is what it is.

As for you, Monkey, you were pretty excited about seeing dinosaurs. You were excited about it for days, after the first suggestion. So Sunday morning, we packed up into our loaner Impala (the Jetta’s in the shop, following a nasty transmission failure last Tuesday evening), and headed out for adventure.

Our first stop was breakfast: Cora’s at Northland Mall. We got there around 9:30, by which time the lineup was well out the door, and almost out the mall’s doors. I think I nearly broke Mommy’s heart when I suggested we find somewhere else. I was starving, and I figured we’d be well over an hour before eating, let alone heading towards Drumheller. We settled for what I consider to be pretty darn good breakfast sandwiches at the Second Cup.

Soon, we were out of the city, and heading into the prairie countryside. I always feel reinvigorated when I go into the prairies — there’s something about the endless horizon and the huge blue sky that makes me feel more alive. I don’t know if you two feel this way (you were asleep, Choo Choo, so I suspect you didn’t even notice), but maybe one day you’ll be able to tell me.

We arrived in Drumheller just after noon, and we went right to the Royal Tyrrell Museum of Palaeontology (or as most people I know call it, "The Tyrrell"), which is one of the best museums I know of for dinosaurs. (Truth be told, though, it’s not just dinosaurs. Although dinosaur fossils are plentiful in parts of Alberta, the museum prefers to cover the entire timeline from the dawn of life all the way up to modern man — there just happens to be a big portion that’s dinosaurs.) We’d all snacked in the car, so we pretty much skipped lunch.

Thankfully, you both are free right now, and will remain so until you’re 7 years old. Mommy had to take Choo Choo off for a feeding (Choo Choo is usually very hungry when she wakes up), but Monkey and I dove right into the museum.

Although you’ve played with dinosaur toys and watch Dinosaur Train, Monkey, you’d never seen anything remotely "life size" before. When you first entered the museum, you were met with a small pack of raptors, and a pair of massive theropods (Albertosauruses, I think). Oh, and a herd of humans. I’m not sure which you were more hesitant of — the replica dinosaurs, or the throngs of people. Either way, you needed a little leading.

You wanted to see the "bones". (I’m not sure where you picked up the need to see bones; Mommy swears it wasn’t her.) We had to round corner, but soon you were looking at arms, and skulls, and legs, and even a half-uncovered skeleton. I’m not sure what you thought of it, and I think you were a little overwhelmed at first. I got a picture of you next to a sauropod leg (you’re under a metre in height right now, and barely were above the leg’s ankle bones). 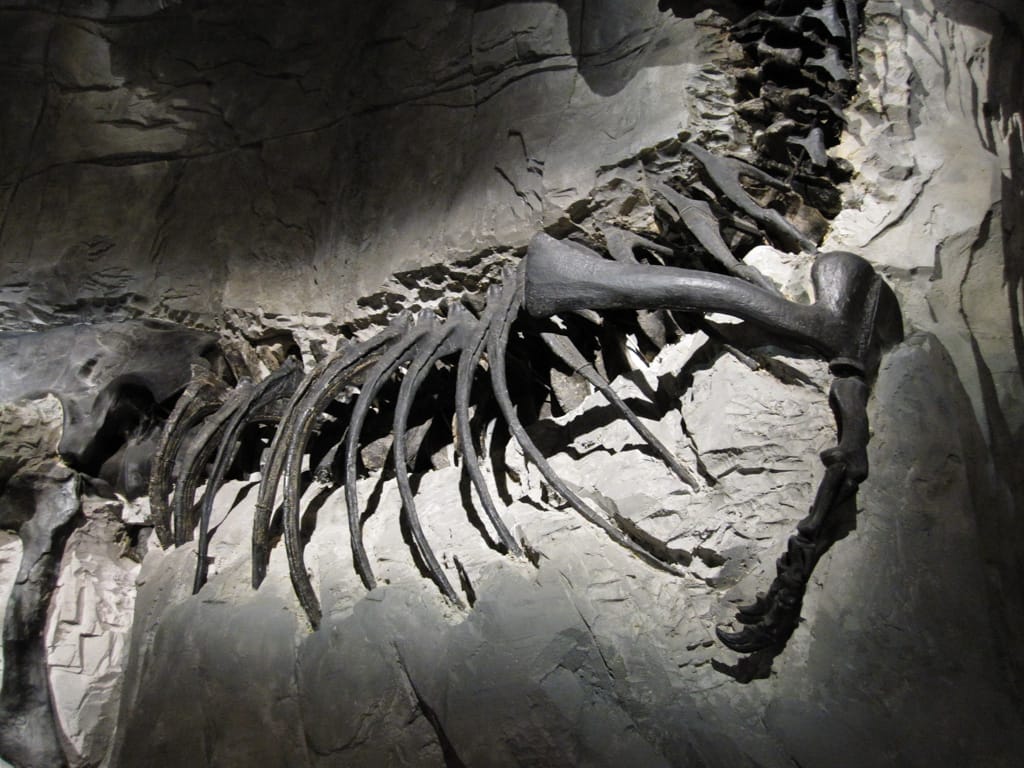 Walking past the lab where the technicians dig out the bones from the rocks, we found ourselves face-to-face with your first Tyrannosaurus Rex. At first, you gasped, exclaiming "dinosaur!", and we walked towards it. Then you stopped, shivered a bit, and mumbled "don’t like dinosaurs" and tried to go back the way we came. I managed to calm your fears, and we looked at the skeletons, and even got a picture of you in front of the T. Rex.

From there, we followed the path through the museum: up the ramp through the special exhibits to the "time tunnel", which leads up to the start of the regular exhibits. You love ramps, and were quite happy to sprint up and down the ramp several times (me having to keep up with you, I might add), pausing at the top to look at the massive wall of purple-lit bubbles. The time spent here wasn’t wasted, having to wait for Mommy and Choo Choo to catch up to us.

Finally managing to move past the ramp and the bubbles, you looked down into the Dinosaur Hall (exclaiming, again, "dinosaur!", followed with a "rawr!") and looked directly at the head of a T. Rex. You didn’t seem at all fazed. You raced through the Burgess Shale (I had difficulty catching up), and paused only long enough at the Devonian Reef to declare: "fishies!", before racing down the stairs into the Terrestrial Palaeozoic exhibit. You spent only long enough here to look almost at Dimetrodon before Mommy and Choo Choo caught up to us. 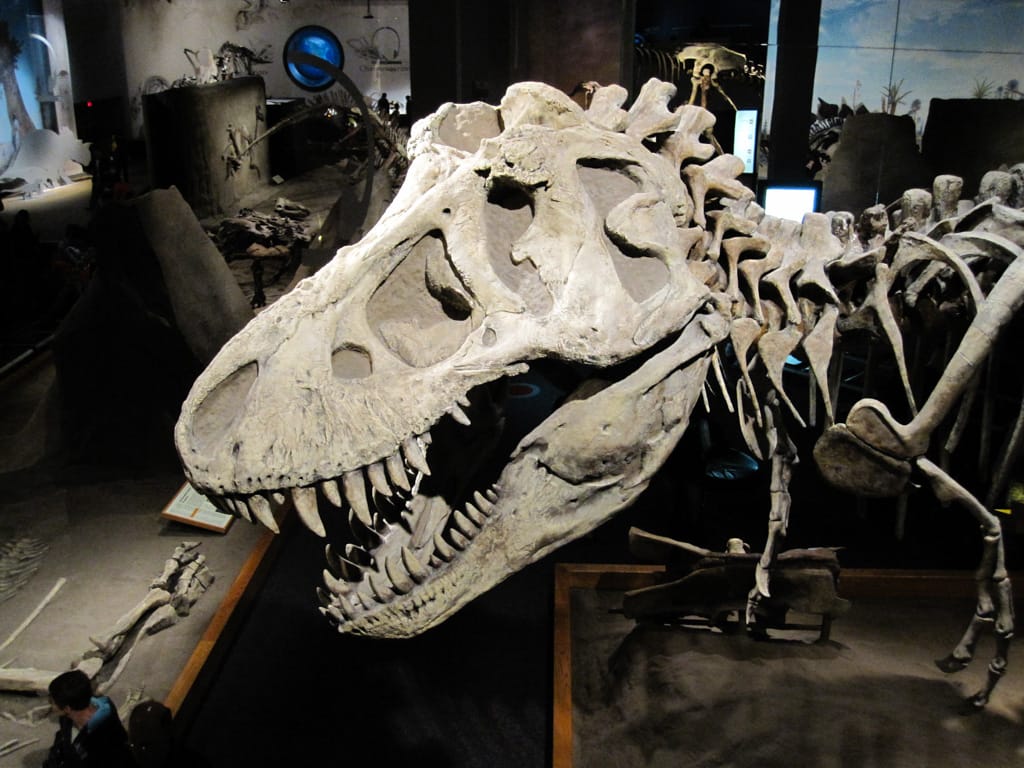 Already, you were showing signs of being too tired. You didn’t blink at a 21-metre Ichthyosaur, tried to run into the Allosaurus exhibit (thankfully, we caught you before that), and generally wanted only to play with blocks and be carried by Mommy (I was carrying Choo Choo in the Bjorn). We sped along through the rest of the museum and into the gift shop (because, don’t all museums end in gift shops?). There, you decided on a small "baby" T. Rex doll — though you could have easily gone with something much larger. I was impressed.

We headed back into downtown Drumheller, finally stopping at Gus’ Corner Cafe for lunch. It wasn’t much, but it was something. By the time we got to our hotel, it was nearly 16:00, and you were just plain baked. Down you went, like a log, for a short nap. Mommy, Choo Choo, and I went down to the lobby to let you rest.

A little over an hour later, I woke you up so we could go for a swim. It had been a long time since I’d taken you to a pool, and I didn’t want to miss out on an opportunity. There were a lot of people there, so we couldn’t do very much. We spent the time practising how to swim: kicking and pulling. You’re getting a lot better Monkey, and with more practise, you might even be ready to swim on your own (with water wings, mind you) by your birthday!

We went to O’Sheas, an "Irish restaurant" near our Super 8 hotel for dinner. It was ... well, it was "okay" at best. Mommy and I have had the luxury of eating in actual Irish restaurants, and ... well, let’s say they take a few creative liberties about their food. It wasn’t that it was bad or anything, just that it wasn’t as Irish as I expected. Oh, and you ate spaghetti.

After dinner, you and I went back to the museum on our own. There was barely anyone else there. You wanted to run around on your own, which you pretty much did. In fact, we went through the museum twice, because you just had to see the bubbles again. Afterwards, we stopped at the World’s Largest Dinosaur — I just had to get a picture of you with it in the background. No matter how hard I tried, though, I just couldn’t get you to go "rawr!" again.

Maybe it was all the excitement of the day, maybe it was the short nap, maybe it was that we stayed up too late, or maybe it was that you and I shared a bed — but no matter what the reason, you didn’t sleep well. You woke up a few times, screaming. Deciding that it was probably because you kept kicking me as you rolled around, I moved to the couch. Not that it helped much...

We headed home on Monday, unable to stay any longer. It was a fun trip, Monkey, and I hope we get to do it again before too long. As for you, Choo Choo, I can’t wait until you’re able to express interest in things like this. I’ll make going to museums a lot more fun than they are now.