Well, kiddo, you made it. Despite all the worries about antibodies running amok and the placenta suddenly appearing in the wrong place, you made it into the station, so to speak, even if you were a behind schedule. (I should note that the lateness was not due to any fault of your part. You, like Mommy and I, were merely along for the ride.)

This morning started almost like any other, with the family rising from bed around 7:00. Except, of course, that neither Mommy or I had slept during the night (Mommy less so), Mommy was not allowed to eat any breakfast (as she was going in for surgery), and Grandpa was preparing to spend the day with Monkey.

And, of course, we were all looking forward to meeting you.

Mommy and I got to the Foothills Medical Centre just after 9:00. We got to Labour and Delivery (also known as Unit 51) right around 9:15, which was the scheduled arrival time. Joan-Margaret, Mommy’s midwife (a truly awesome person that you will meet a few more times yet) was already there and talking through your birth with the staff, while Mommy and I got shuffled into room 507 — which until that point was debated as even existing.

Your sister, Monkey, was a "natural birth". I write it that way because that’s how it’s referred to — the way most babies come out. We had originally planned for a similar arrival for you, Choo Choo, but things don’t always go according to plan. In fact, our original plan got steadily hacked away, turning our lovely swan topiary into a rather dumpy-looking nub of a shrub — we’d gone from a midwife-driven home birth to a hospital-organised surgery with a who’s-who of doctor titles. But at least the midwife wasn’t totally out of the picture.

For the last few weeks, Mommy has endured many tests to see if you were okay. When we arrived back in Canada in December, we found that there was a rare antibody that makes people in medical professions say "uh oh". That led to multiple ultrasounds, a lot of blood tests, and too many surprises than either Mommy or I would have liked to have considered. Those blood tests were to make sure that, during the c-section that was almost guaranteed to happen (it was only a high probability until the previa was discovered, at which point it became an absolute given).

Well, someone "lost" the lastest test, only taken yesterday.

Naturally, this causes more than a little stress. While not a total disaster, it meant a delay until either a) the test results were found, or b) new blood was drawn and tested. The latter would take at least a couple of hours. But thankfully, the clerk who reported it missing would later apologise profusely when she realised that it was simply her mistake. Still, when you’re not an emergency, you sometimes have to wait. Which we did.

Thankfully, Joan-Margaret is perhaps one of the most fascinating people I’ve met in a very long time. Already a grandmother (her experience and appearance utterly undermine her age), she has worked across the globe (and Western Canada) and can tell some pretty interesting (if tall) tales from her medical past. She’s one of those people I would immediately point out as an ideal mentor to others, and someone I would dearly love to have as a friend going forward (if for no other reason than her personality). But I digress...

When we finally got called, I donned by booties, my cap, gown, and face mask, and then took residence in a strange little waiting area right next to the operating room while Mommy got prepped for the surgery. Although a major surgery — for all intents and purposes — she needed only a local anesthetic so she wouldn’t feel the pain of surgery. I was kept out until the prep was done, at which point I was brought in and sat right next to Mommy. 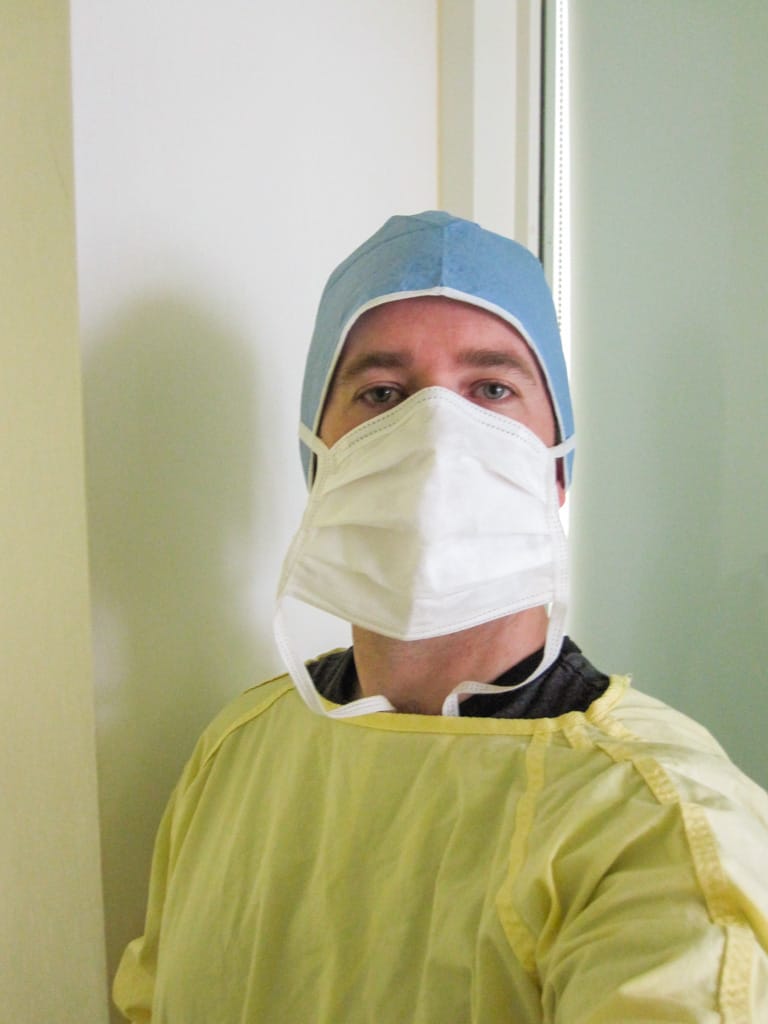 Unlike with Monkey, I didn’t see you entering our world, Choo Choo. A part of me is sad for that. Monkey’s arrival was a bit rushed at the last moment, but yours was completely shielded by a protective cloth in between Mommy and I, and you and the doctors. We could see certain sounds (notably your water breaking), and one of the doctors (it might have been the obstetrician — we couldn’t even tell who it was) giving us a play-by-play: foot, leg, bum, back, arm, and then a note about your other arm wrapped around your neck like a "feather boa".

Finally you were out, and I was guided over to the warming table, where three people (there were no less than 10 in the room, beyond Mommy, you, and myself) who were focused on your health. They cleaned you off, emptied your lungs, and did the quick check to make sure you were okay. Then they wrapped you up in a blanket, and I placed you by Mommy for the first time.

I hope at some point n the future, I can related to you the feeling of overwhelming joy and relief I felt seeing you for the first time, lying next to Mommy’s head. You were no longer just mimicking an alien trying to burst from Mommy’s belly, at constant risk of blood antibodies. You were out in the world, on your own, breathing and kicking. 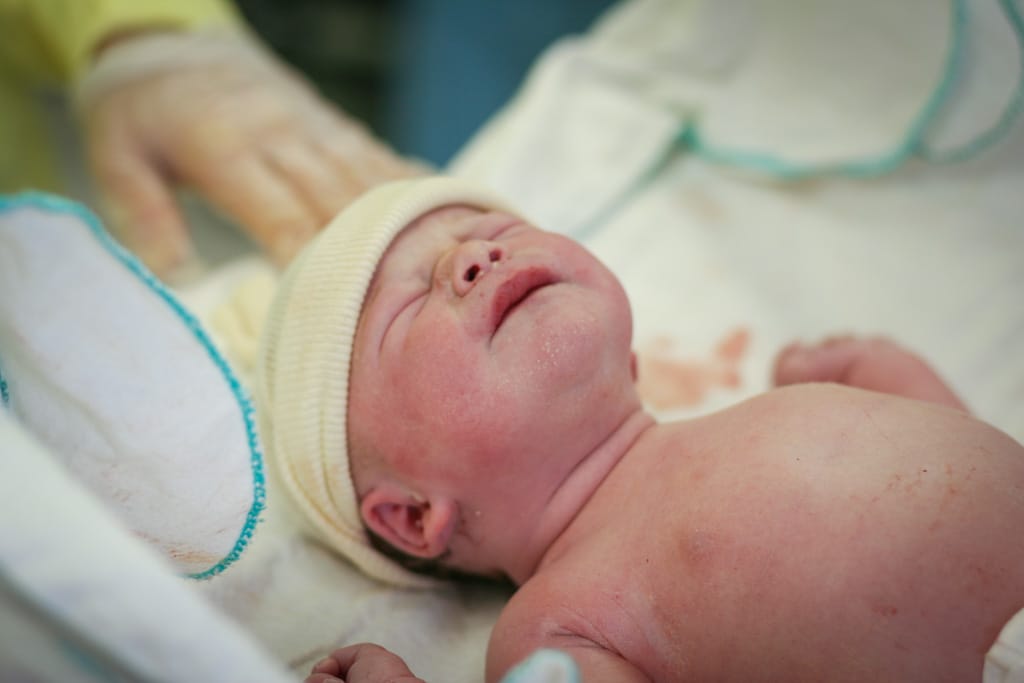 And then you were taken away.

This was the part we hadn’t expected, nor had Joan-Margaret or the obstetrician — it was the decision of the NICU to take you away to monitor your health until the test results came back, either clearing you of concern, or keeping you around for treatment. We weren’t sure which it was going to be. Our nub of a shrub suddenly seemed stumped.

I left Mommy behind and followed you to NICU, and didn’t leave your side until a) we were certain that you were okay, and b) had a band around your leg that said "I Am A Sowrey". While I do have a lot of faith in our medical system, having you separated from Mommy wasn’t at all what we wanted, and there was no way we would have been able to handle you being lost as a result of a clerical error.

I spent most of the afternoon running back and forth between you and Mommy, before finally Mommy was wheeled over from her recovery, and the two of you spent your first real time together. Although hours delayed, you were immediately happy to be with Mommy, and I hadn’t seen Mommy that relieved in a long time. I think we both cried.

We remained there for almost an hour before we had to leave you behind one more time while Mommy was moved to her room in Post-Partum. I went home to check in on your sister and Grandpa, had my first bite to eat since breakfast (it was now after 18:00, I might add), and get Monkey ready for bed.

Joan-Margaret called, once again revealing the infinite depths of her awesomeness, and had somehow arm-wrestled NICU into releasing you to the Post-Partum ward to be with Mommy. Mommy called me, beyond ecstatic that you would be joining her shortly. When I arrived back at the hospital around 20:30, the two of you were cuddled up on Mommy’s bed.

You were laying face-down on Mommy’s chest, her gown unbuttoned. You had your left hand curled up under your chin, your other arm hidden under the blanket. You were sound asleep, not showing any of the action (or bewilderment) of your sister. I don’t know if that’s because of how you were born, or because of your demeanour. Let’s be honest, I’ve only seen you for a few hours today, and not nearly long enough to yet know how you act or behave.

And yet, I already love you. You are my daughter, and I have been worrying about and for you since you first gave your mother a good solid kick. I have laid awake at nights, worrying about anti-k and how surgery might affect Mommy and you. You are no stranger to this family, even if your face had not been known until now. Even when you were exposed and alone in NICU, probably wondering what had happened to the muted world you’d known all your life, you knew me — the sound of my voice seemed to calm you, ease you. You know who I am.

Welcome to the world, Choo Choo. I can’t wait to show you its wonders.