Two weeks ago, I was sitting at my desk at work, plugging away on requirements documentation. It’s rather mind-numbing at times, but is often very helpful for the rest of the team. My phone rang. It was my wife, Alex. Normally, she just text-messages me. Actual phone calls are left for things that are important and need immediate discussion.

Alex didn’t sound her usual cheerful self. In fact, the tone of her voice that worried me almost immediately. She asked me: "Look up ‘anti-k’. What does it mean?" Google quickly plunged me into Wikipedia and a raft of pages filled with partial information and incomplete answers. "You need to get a blood test right away! We need to know if you’re K-positive."

I can’t remember the last time I felt my blood run ice-cold.

I didn’t know what was going on. Was something I had done — something I had acquired? — put my child, and possibly even my wife at risk? Were we talking slight risk, or are we talking imminent danger? The message conveyed to us was one of urgency, which translates quite easily to "panic". (A message, incidentally, common with many others we found across the internet.)

The truth is that K/anti-K is a reasonably rare condition. So when it does appear, it’s sometimes treated as a more of a dangerous situation than perhaps it needs to be. (Or at least, that’s my impression. The fact that we’re so far along in the pregnancy might contribute to that, too.) Not a lot of doctors are prepared for this situation, either — even a doctor who had delivered babies for over 30 years considered it something "not to worry about".

Explanation time. The "K" represents the Kell antigen system, one of many such fun things that float around in human blood. On its own, it’s pretty much harmless. It’s only when it comes in contact with K-negative (K-) blood that you have a problem. People who are K- build up antibodies to the antigen — a perfectly normal human response.

Things get complicated when you’re talking about an anti-K mother who is pregnant with a K+ child. The K antibodies have the ability to cross the placental barrier, and can attack the otherwise healthy red blood cells in the developing baby. The severity of the attack can lead to hemolytic disease of the newborn.

It works like this: The antibodies attack the K+ red blood cells, destroying them. (This is how the body fights infection, by the way. This is — unfortunately — the body fighting something it doesn’t need to fight.) This reduces the amount of hemoglobin in the baby’s blood, which also reduces the amount of dissolved oxygen. If the level of oxygen drops too far ... well, let’s just say it’s not good, and not something you really want to think about as an expectant parent. In serious cases, doctors can perform an intrauterine transfusion, which involves putting a needle through the mother’s abdomen into the umbilical cord (all guided by an ultrasound; the baby is "paralyzed" to keep it from moving).

A lot of websites talk about titres ("tee-ters"), which measure the amount of antibodies in the blood, or suggest that you need to need to do an amniocentesis test. The problem is that the titres are meant to gauge concentrations, and the amount of the antibodies you have doesn’t matter — it’s that you have them at all. The amniocentesis test can only confirm whether or not the baby is K+ — it doesn’t actually solve the main problem. The simple reality is, if the baby is K+, you’re in for a lot of tests.

Which brings me back to us.

The last couple of weeks have been filled with a variety of tests, more reading on the internet than I want to acknowledge (even for me, it’s excessive), and questions to as many doctors as will listen. Most of it was more of the same thing: some fact, but not enough about what was happening to us, and we really, really, really needed to know if this meant anything at all.

The tests came back from the Canadian Blood Services lab in Edmonton: I’m K+, something that only 9% of humans possess. (Actually, both Big-K and Little-K, just to make things more interesting. And no, I don’t really know what that means.) Alex is "anti-K", meaning she produces antibodies to ward off the K antigens. And while we don’t have a test to know with absolute certainty, it’s pretty much guaranteed that Monkey is also K+. During birth, Alex’s and Monkey’s blood mixed, causing Alex to generate antibodies against the K+ blood.

Yesterday, we went to the Maternal Fetal Medicine clinic at the EFW at the Foothills medical complex. Alex underwent a near hour-long ultrasound, drawn out mostly due to a perinatologist-in-training (getting backup from a well-trained sonographer) and a very mobile (hence, uncooperative) baby. Most of the ultrasound was measurement, checking size (the kid’s already clocking in at nearly 6 lbs). 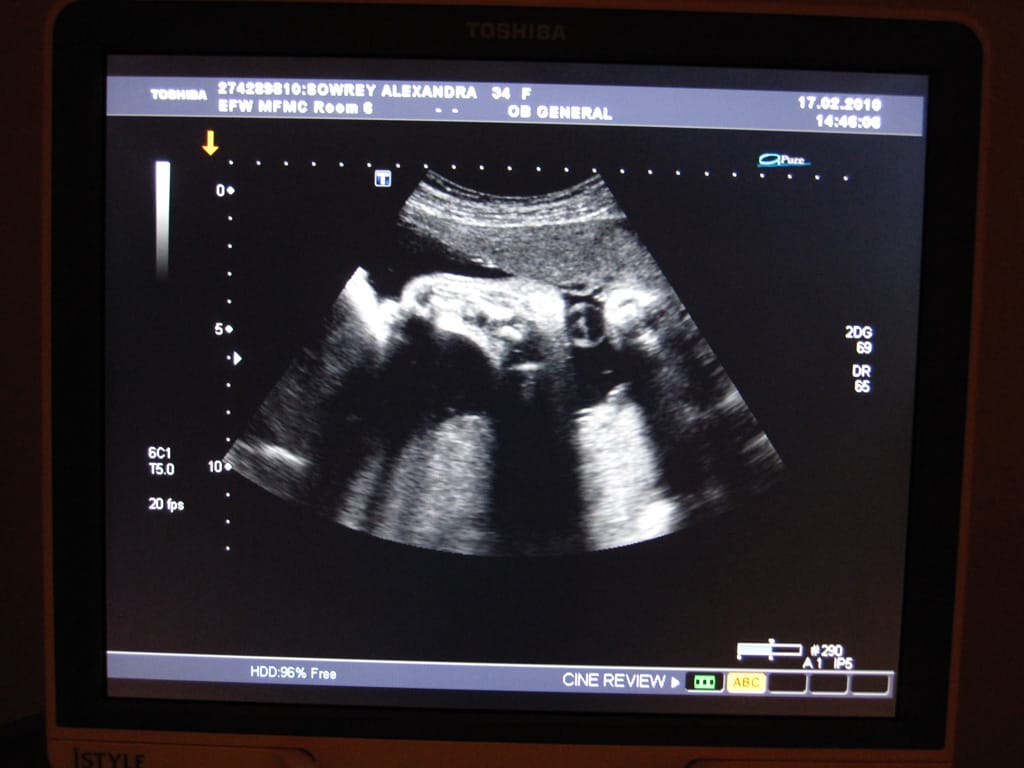 It was the latter part of the exam that intrigued me — it was something I hadn’t seen before. The operators (including Dr. Greg Connors, the head perinatologist in Calgary) were doing a doppler test on blood flow in Choo Choo’s brain. At the time, it was intriguing to watch, though I didn’t really understand what was going on.

Afterwards, we met Dr. Connors in a consultation room. Alex commented that the room "looked like they bring people in to tell them bad news". I still had hope that things weren’t that bad, given Choo Choo’s in utero activity (there are times that I swear I’m watching a scene out of Alien). Dr. Connors explained the situation extremely well, putting much of the questions to rest (I’ve summarised the technical stuff above, mixed with other things we’ve learned). The remaining question was: Is Choo Choo alright?

The blood flow is a test that almost entirely replaces amniocentesis (and has proven to be just as accurate). Research shows that the brain is very good at regulating its oxygen supply by altering the rate of blood flow — low oxygen level (as a result of low hemoglobin), higher rate of blood flow.

The scale of the flow, at least insofar as anti-K is concerned, ranges from 1.0 to 1.5: 1.0 is "normal", and 1.5 is the point where you schedule a transfusion. Choo Choo is clocking in at 1.4. Basically, not in danger, but not out of the woods — right in the "monitor and review" range.

To top it off, we’re also in a pregnancy grey area: too late to do some procedures (such as amniocentesis), and too early to do induction. We have to wait.

Next week, we go back again, and test again. If the scale increases, we have to increase the frequency of ultrasound tests. If the scale decreases, we get to breathe a bit more. But no matter now it goes, Dr. Connors was clear: we’re having Choo Choo earlier than expected.

Sorry Darren and Jeannie, chances are we’ll beat you to the punch.