I’m a Know-It-All. (Most of you know that.) I freely admit this because a) it sometimes gets me into trouble, and b) it’s something I need to try and control. It’s the need for control that brings me to self-reflection, to look back on the things I do (or have done) and the things I say (or have said). Were they, in fact, factual? Were they right? Was I wrong? Who was right, and could I have approached the situation differently?

You may be wondering: "Why ask those questions? Isn’t that obvious?" Therein lies the ultimate pit-trap of the Know-It-All — the question isn’t obvious, only the answer. And the answer is what a burgeoning Know-It-All will readily offer up to anyone within earshot, regardless of whether or the Know-It-All was asked or even if there was a question to begin with. It doesn’t matter if they’re actually right — it’s the urge to be right that drives them...

...and often drives everyone else around them crazy.

I know this, again, because I’m a Know-It-All. Or rather, a Know-It-All working towards Enlightenment. In that sense, you could consider Know-It-All-ism to be sort of like a martial art. The starting Know-It-All is a mere white belt, a novice to knowledge and ego, and can quite easily lead down the path of an ordinary person, learning and answering only when asked. It is when ego plays a part that the Know-It-All begins its fateful ride. 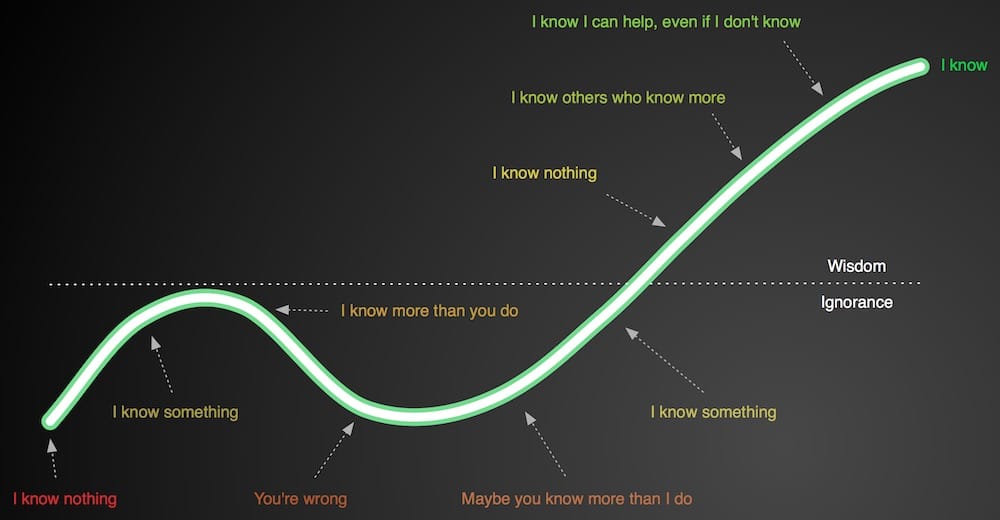 Witness the Know-It-All Curve. This is the progression of a Know-It-All from the beginning of knowledge, to its truest and holist form. It’s a rough road, spending a large portion of time in Ignorance, before trending into Wisdom. It’s not a one-way road, either, as it is possible — and very easy — for a Know-It-All to slide very quickly backwards.

At the beginning, a Know-It-All — and everyone, for that matter — literally knows nothing. They have yet to start on the path, and are beginning to learn. How they learn, to be honest, is somewhat irrelevant. Reading, watching, listening, or doing all have the same basic effect. The question is: who is guiding them? Know-It-Alls tend to breed Know-It-Alls. (Seriously, folks, fear for my children...)

The Know-It-All has in their possession some knowledge. It’s perhaps not much, and might be readily corrected by others. A Know-It-All could be stopped here and broken from the cycle. Quite often, however, the Know-It-All is allowed to continue by mere fact that no-one else recognises the danger.

I Know More Than You Do

Pretty much at the bottom of the trough is where ego has overridden reason, and the Know-It-All can neither see nor do any wrong. (Particularly spectacular are when two Know-It-Alls at the same point of the path meet head-to-head.) These are the Know-It-Alls everyone hates, and the ones that tend to occupy most everyone’s perception of a Know-It-All. Statistically, this is likely where most Know-It-Alls reside, too. (I’d kill for actual numbers to back this up. But hey, I’m a Know-It-All, right?)

It takes a singular event for a Know-It-All’s world to be shifted. Typically, the Know-It-All, after steadfastly refusing to see otherwise, is proven painfully wrong. Perception changes...

Maybe You Know More Than I Do

The first thing a Know-It-All has to recognise on its path to Wisdom is that it didn’t know as much as it thought it did, and that there is a huge breadth and depth of knowledge that still remains out of touch. If the Know-It-All fully grasps that point, then it leads to...

The first real step of Wisdom, common with many belief and study systems, is that a student truly knows nothing. This is a fundamental step, as it puts aside all previous beliefs, constructs, and preconceptions, and wipes the slate clean in preparation for a new education with new direction. It is a fundamental step that a Know-It-All must take to truly Know.

I Know Others Who Know More

Rule #1: There is always someone who knows more than you do. Always. Perhaps not in a given subject (there is always a subject matter expert who cannot be disputed), but you cannot be an expert in all things — that, so far, has eluded humanity. Knowing that there is someone else out there who might know more than you drives a Know-It-All (now reforming) to look others for knowledge, and establish their own perceptions in real fact.

I Know I Can Help, Even If I Don’t Know

The end of the path isn’t really the end — it’s more of a state of being. It’s knowing what you know, what you don’t know, and how to help others to know the same.