Well, Monkey, we’re down to less than a month before we’re back home again. In fact, a month today you’ll (hopefully) be sound asleep in a bed in our home in Calgary. It’s hard to believe that this is actually ending. It seems to odd to think that after all that we’ve been through, that this isn’t more permanent. Such are the joys of life...

Thankfully, one of the other joys of life are grandparents. You’re lucky — you’ve got four of them. And you were very excited when Grandpa and Granny came down on Wednesday. It’s Grandpa’s third visit since we came to Costa Rica, and Granny’s second. You might see them nearly every day on Skype, but there’s just nothing like seeing them in person.

Despite the previous visits, neither of them had seen much beyond the Central Valley, although on their first trip, they flew into Liberia and took a bus to Santa Ana. That’s not much, sadly, and Mommy and I felt it was important that we take them elsewhere — some place to rest and relax. Besides, it’s Grandpa and Granny’s 20th wedding anniversary in a couple of weeks, and we wanted to give them something special.

So on Friday afternoon, the four of you picked me up from my office, and we went off for a weekend excursion. Though our first stop was for lunch at a nearby Peruvian restaurant called Chancay, in Plaza Rubi. You were quite energetic and ran circles around the tiled floors, squealing everywhich way you went. The woman tending the hot dog shop was particularly entertained.

We hit the highway afterwards, heading west towards San Ramón. You’ve been this way before several times, and I think you spent more time playing Grandpa than looking out the window. Well, at least until we hit that traffic near Animas — an accident had brought the Inter-American to a near-dead halt.

Mommy and I opted to leave the highway and take the secondary roads to get around the traffic (we had no particular desire to sit still when we could just as easily entertain a more scenic detour). It might not have been the wisest of choices — the drive from the intersection with #3 to Naranjo (where we rejoined the Inter-American) is normally about 20 minutes without traffic. It took us nearly two hours. But we did get to see Sarchi, which we hadn’t seen before, and a lot more of the countryside that Grandpa and Granny hadn’t seen before.

Once we got to San Ramón, we headed north to Los Angeles, and then out to Mommy and mine’s favourite place in Costa Rica (and currently my favourite place in the world), Villa Blanca. There are few places I know of that are more beautiful or peaceful.

Normally, Villa Blanca (at least by our experience) sits very much in the Los Angeles Cloud Forest. That means the area is usually shrouded in clouds, giving the area a very ethereal look. 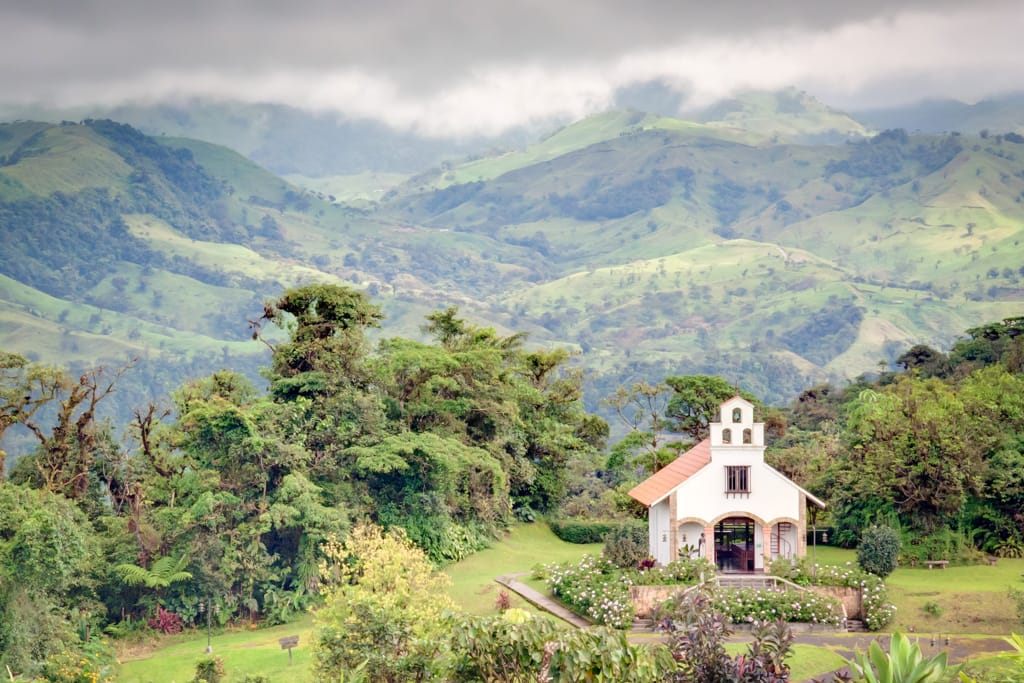 This time, for some odd reason, there were no clouds. At all. I don’t know if it was a result of the Tropical Storm/Hurricane Ida that went up the coast a couple of days ago monkeying around with weather patterns, or if this is the normal state at this time of the year. At any rate, when we arrived, we could see clearly to Arenal, and even saw the top of that rather elusive volcano. 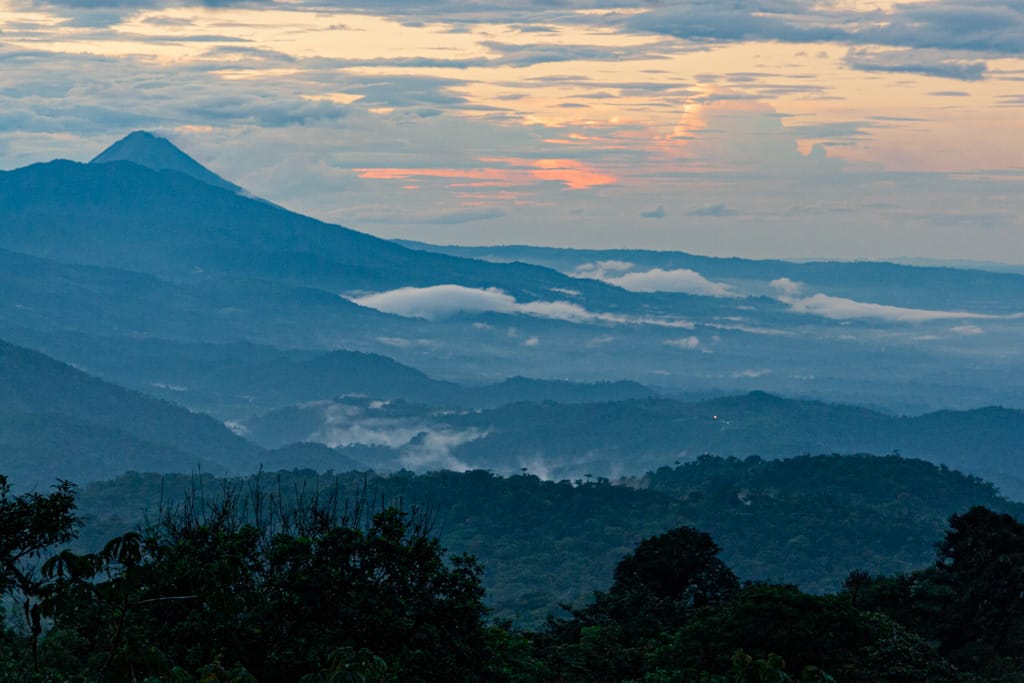 Mommy, you, and I had our own cabina, with Grandpa and Granny at the next cabin to ours. You were able to walk between them, and were often sent over to say "hi", and get people ready to go for meals. You had your own bed, too, a nice cot that Villa Blanca set up for us. Sadly, you fell out of it on the first nice — twice — so the next day Mommy and I put the mattress on the floor so you could sleep more safely.

What did we do at Villa Blanca? That’s what Mommy and I like most about Villa Blanca — you don’t need to do anything but enjoy the area. You went for walks with Mommy and Granny, played with Grandpa, read, and tried to chase the coatis. You looked at all the wonderful flowers, stared at the intensely black skies at night and saw stars you’ll be hard-pressed to ever see in Calgary (unless there’s a total blackout), and ran about whenever you possibly could (which was pretty much always).

You even tried to have a bath with Mommy. But Mommy takes inhumanly hot baths, which you found out the hard way when you nearly did a head-first plunge into the tub.

On the Saturday morning, I took Grandpa ziplining. Mommy had gone ziplining at Villa Blanca back in May when Erin came down to visit, and it was time for me to try. I would have been upset if I’d left Costa Rica without ziplining at least once. And taking Grandpa with me sounded not only like a lot of fun, but perhaps also a little sadistic.

It turned out that Grandpa and I were the first customers in a few days who wanted to go on the canopy tour, and were the only ones going out that morning. We were picked up by our guides, Luis and Oliver, at the hotel and whisked about a kilometre away to the tour’s hut.

This wasn’t my first time ziplining. I’d done the zipline in Calgary at Canada Olympic Park. But that one is quite a bit different — it’s all about the massive drop from the ski jump, not travelling through the trees. This one is decidedly more calm, and probably a lot safer (despite travelling through tree tops). 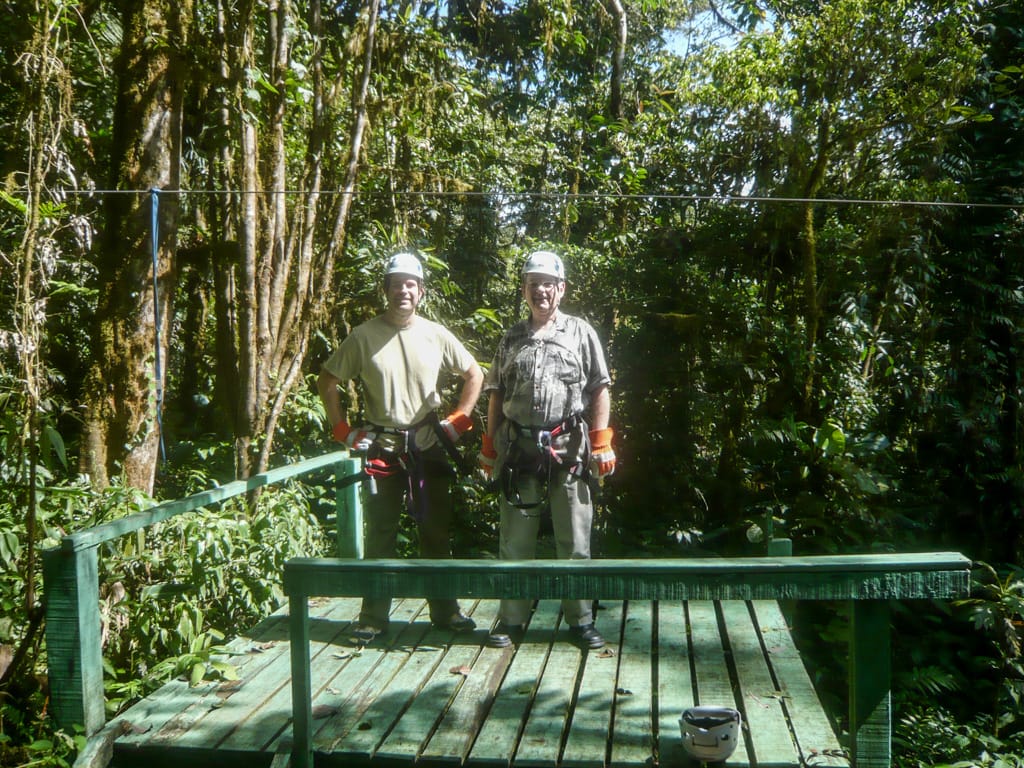 I made Grandpa go first, though he didn’t seem to mind one bit. And as near as I could tell, he enjoyed himself quite a lot, too. Even when we dropped vertically from one platform to another, hanging free. I can only hope that I have as much fun as Grandpa when I get into my later years. 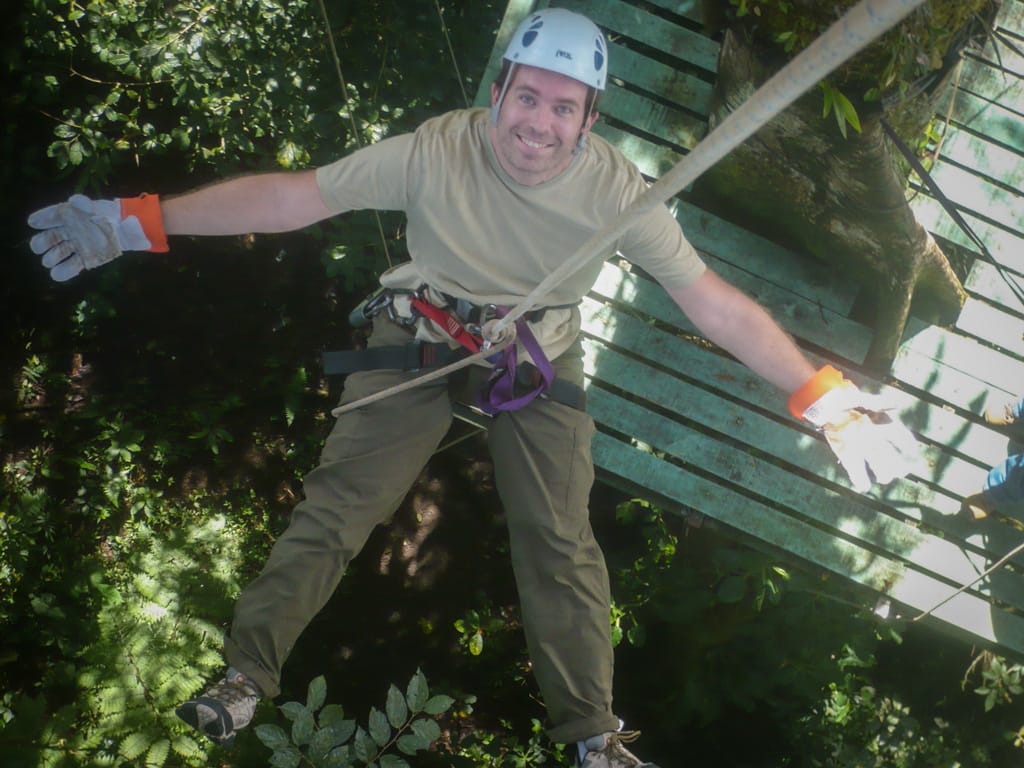 We stayed for two nights, and left mid-morning on the Sunday. My idea was fairly simple: in addition to Villa Blanca, we’d also go on a coffee tour in Naranjo. My friend Mark (of Mark and Denise fame) had recommended a tour in Naranjo, and we’d seen the signs during out detour on Friday. We arrived at the Espiritu Santo coffee plantation just before noon, just avoiding a rather large tour that was just departing.

Espiritu Santo is one of an increasing number of coffee-growing collectives in Costa Rica. The colonial past of massive plantation owners gave way to smaller farms, which were then exploited by coffee buyers. The smaller farms have now grown into collectives, using their position to bypass the middlemen and go direct to the customers. In Espiritu Santo’s case, 90% of their coffee is sold direct to Starbucks. 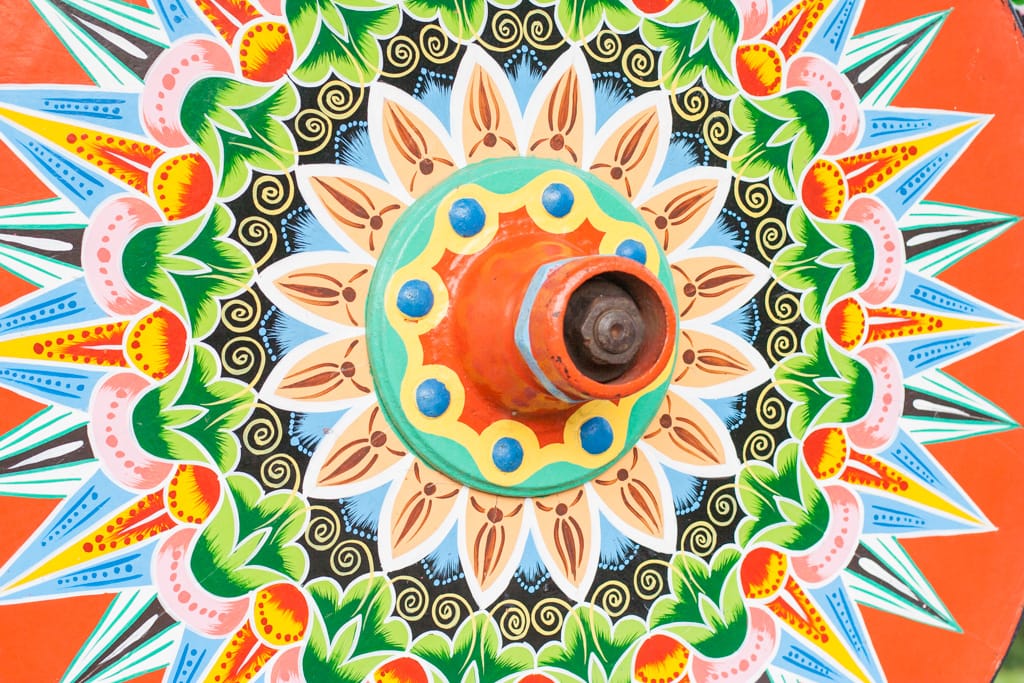 The tour was small — the five of us, plus another ex-pat and his friend from the United States. We started in a covered patio where we sample four types of their coffee: dark, light, house, and peaberry. I drank far too much of the coffee, myself (I had a splitting headache today, and felt quite ill as a result). You drank almost as much as I did, but seemed to have very little affect on you — well, except for not sleeping at all until your bedtime tonight, that is.

After the coffee sampling (which is usually at the end), we went into the outer edges of the coffee fields. Our guide, whose name I can’t remember now, explained that the area is geologically a "failed volcano", which explains its hilliness, volcanic-type soils, but lack of a defined peak or caldera. The hills were something to see with the neat rows of coffee plants. I wished I had the ability to take more detailed pictures of it, but someone had to keep and eye on you.

I learned a little more from Espiritu Santo’s tour than I had with the Doka coffee tour. Namely that while harvest season is November to February, it’s not a constant harvest. In fact, it only happens four times — once a month for four months. And all of the harvest needs to be processed in one day to prevent any fermentation of the seeds that will eventually become the coffee bean. 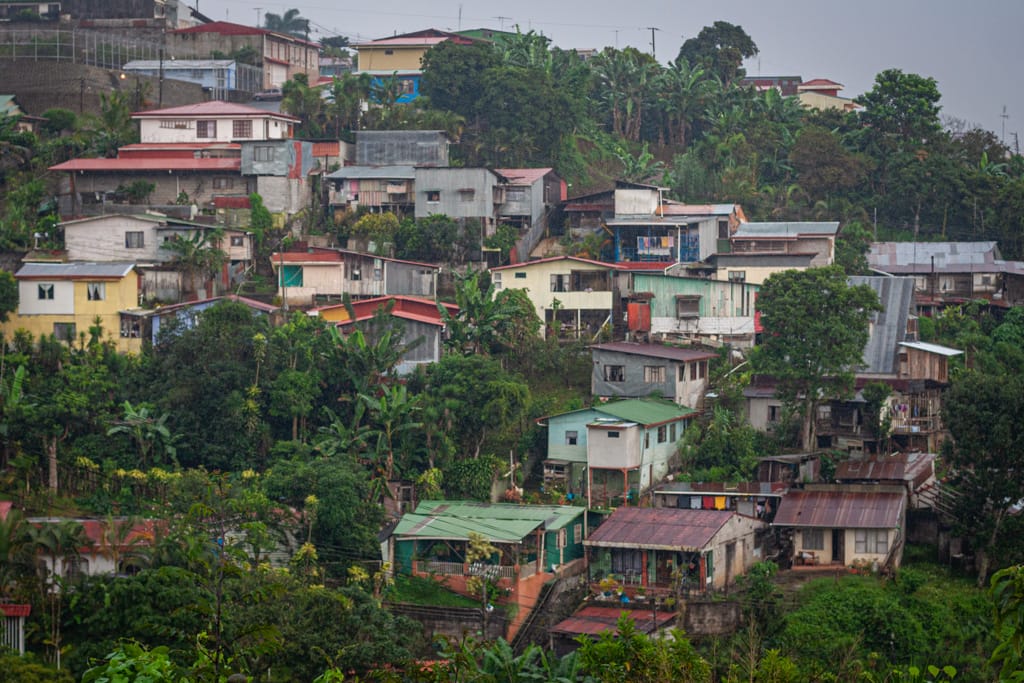 The afternoon storms were starting to roll in as we started, and Mommy quickly ran back to the car for her jacket and an umbrella. But the tour guides produced umbrellas for us, too. You held onto the one you and I shared (you were on my shoulders most of the tour), and later held it totally on your own.

We visited the processing machinery, which — at least to me — seemed so much simpler (and less interesting) than Doka’s water-powered, turn-of-the-previous-century machines. The guide explained that afterwards, the beans are taken up to an old runway (the former plantation owners were quite wealthy) where they are dried before shipping. Only some is kept for local consumption, which is roasted in-house.

The tour also featured an historic reconstruction of a typical farmhouse, where the guide explained farm life, and how Costa Rican coffee is traditionally made (which you already know — the chorreador). After that, it was up to the gift shop (of course). You played with a marimba that I know both Mommy and I considered getting for you.

Thus ends what will likely be our last trip here in Costa Rica. The next time we head out from our apartment, it will likely be to head to the airport. It’ll be hard, for all of us, as it’ll be a major change in our life.