Our time is dwindling in Costa Rica, Monkey. Our little experiment draws to a close in just over a month. That’s five weekends (not counting the one we just had — that would have made it six). Our Costa Rica "bucket list" is a little longer than we’d like, and there are just things we are not going to get to see. It’s a little tragic, considering how long we’ve been here, but I guess this is what happens when the joys of life sometimes hold on a little harder than with others.

Being in good shape (namely, none of us was sick), we decided to take a little journey north to La Paz Waterfall Gardens. It’s listed in all the tour books as one of the places "you must visit", and we’d waited more than long enough to go.

We kinda had to wait, though. It took them a while to rebuild...

You probably don’t remember the earthquake from back in January. Grandma had left for Calgary just that morning, when suddenly the ground shook. I was at work, and was fairly freaked out — mostly to make sure you and Mommy were okay.

But what we felt was nothing compared to what La Paz had experienced. Being barely a kilometre from the earthquake’s epicentre, the earthquake had done a considerable amount of damage. So much so that the park only reopened back in July, and almost half of the trails still remain closed. We couldn’t even see two of the four waterfalls there — one of which is the the most famous there, and the park’s namesake: La Paz.

Mind you, we didn’t know that until we got there. And as the saying goes, getting there is half the fun. We drove up through Cuidad de Alajuela, winding towards the Poas Volcano. Having remembered this from back in January, I sort of knew where to turn to find La Paz. The trip itself was beautiful wound through the farmlands on the slopes of Poas, as well as on the north side of the Central Valley mountains.

At one point, we got stopped as a small herd of cows were being driven down the road. As we could do was stop and let them pass by, mooing softly.

The closer we got to La Paz, the more the terrain became affected by the earthquake. Even though it’s been over 10 months since the quake hit, repairs are still on-going — and likely will be for years to come. The hills are being sculpted carefully, presumably to prevent the massive slides that killed all those people, and destroyed countless kilometres of roadways. The massive red-brown terraces made it feel like we were driving through an open-pit mine. Many of the roads were reduced to dirt and gravel, with pockets of torn asphalt. 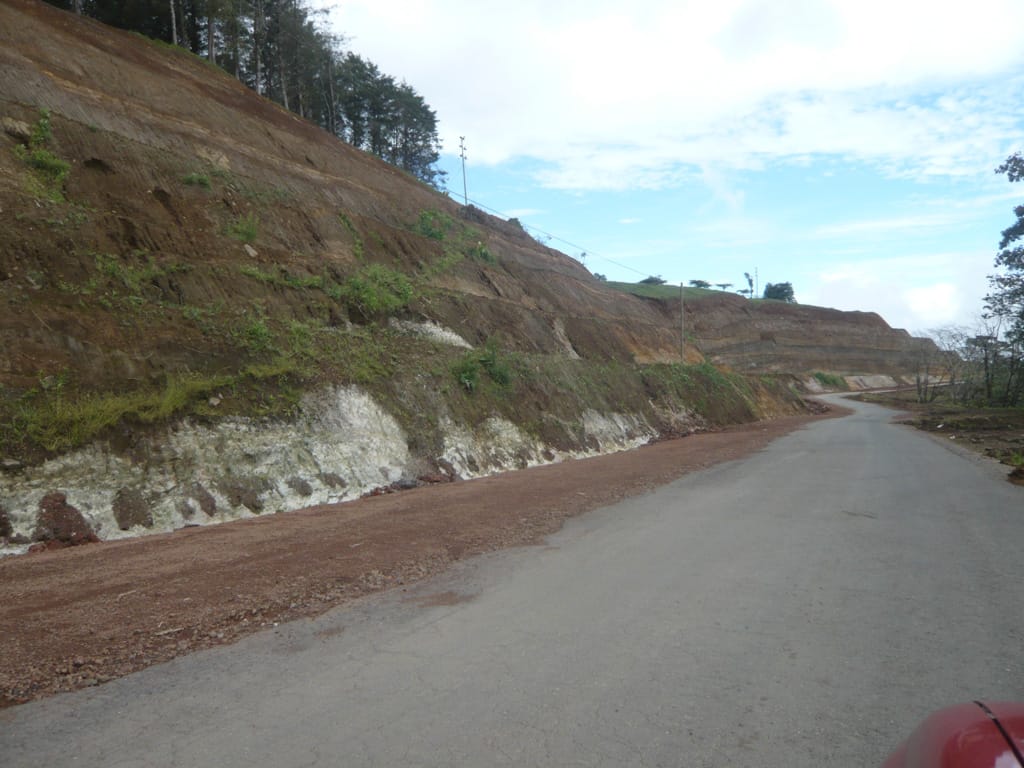 We arrived at La Paz about 90 minutes after we’d left Santa Ana. It was, and remains for now, the end of the road. The road from there through towards Arenal is apparently impassible, and is blocked by large boulders. La Paz seems to be at or near the edge of the cloud forest, as we saw the familiar white wispy tufts wafting in from the valley beyond.

The cost to enter La Paz is steep. It’s US$35 per adult. We knew it was expensive before we went there, but we knew it was some place we wanted to go. I didn’t tell Mommy the full price until we were inside, and after I’d managed to use the bathroom. The bathroom was pretty neat — it had a waterfall instead of a tap. I really should have taken a picture of it.

We walked down the stairs, watching as workers continued the reconstruction of the buildings above us. We walked over to the Aviary, which was our first exhibit. The aviary was full of birds that we’d never seen — or not seen easily. Some were very small, barely larger than some of the sparrows back home. As we went further in, we saw four ducks that seem to fly around inside, perched right next to a hawk and what looked like some kind of eagle. 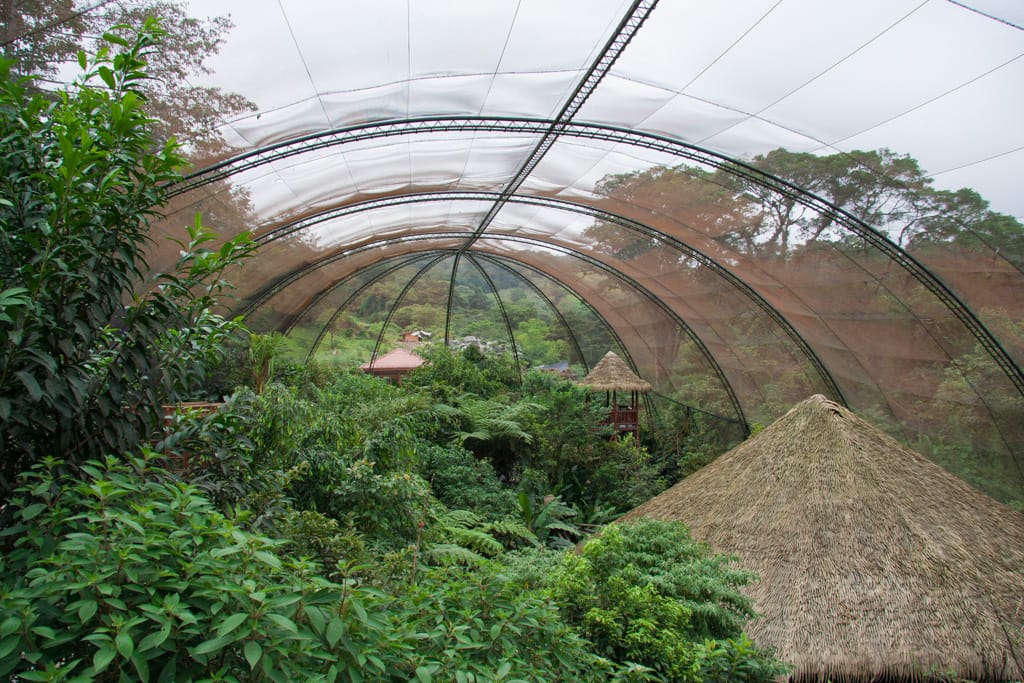 Soon, we found the toucans, which were in a larger building along with parrots and what Mommy and I are calling "love birds". The toucans are in a very large cage, which have a pair of doors so you can go inside with them. This was something neither Mommy or I had expected.

The first time Mommy and I saw a toucan was before we were married. We’d come to Costa Rica for her birthday in 2005 (it was that trip that led to us moving here in 2008). We’d gone on a hike through the forest on the south side of the Arenal Volcano. Our guide, Oscar, claimed to have seen a toucan well over a kilometre away, and had shown us through a telescope. I never thought I might get to see a toucan any closer.

You might not remember this, Monkey — we have video to prove it to you, though — one of La Paz’s staff sat a toucan right on my arm. They are absolutely beautiful birds and despite their massive beaks, these were very tame. You didn’t want a bird on your arm. I can’t say I blame you. 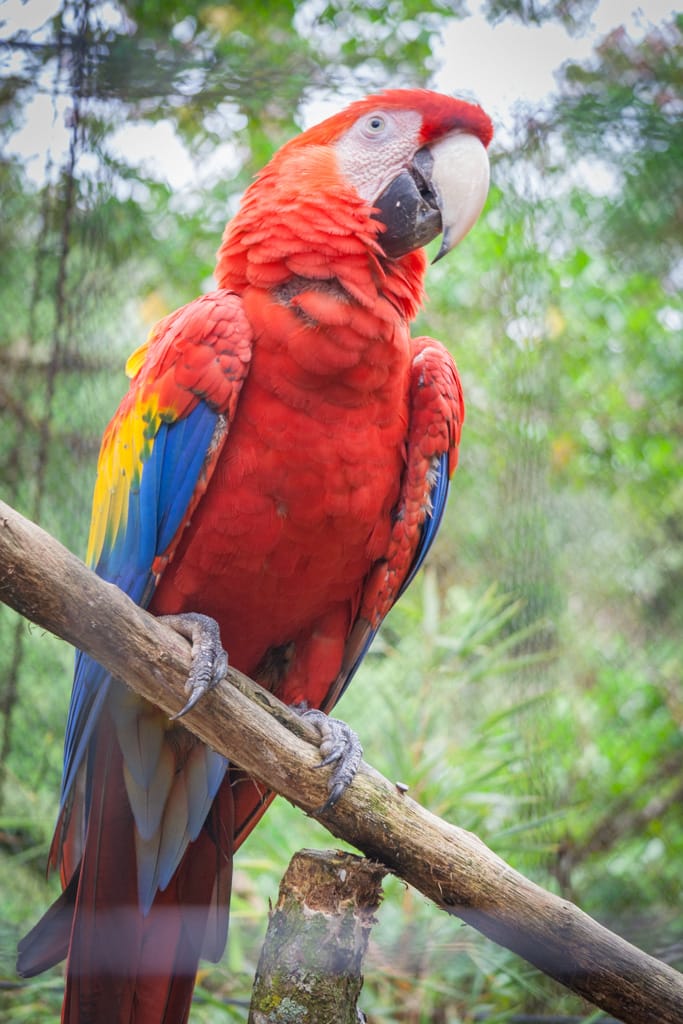 There were some bright red macaws outside the hut, as we headed towards the butterfly conservatory. You’ve seen butterflies before, Monkey, and in far greater quantities than at La Paz. (I would probably put La Paz at #4 — maybe #3 — on the best butterfly places we’ve seen in Costa Rica. It’s not bad, but it wasn’t really great.) In fact, I think you were a little bored having to see butterflies AGAIN. You were far more interested in the sloths, and in what I think was a small anteater.

We would have left fairly soon after arriving had it not been for the sudden downpour outside. And with our umbrellas in the car (short-sighted decision making on your parents’ behalf), going outside was not a wise idea. Thankfully, the rain was short-lived (only about 10 minutes).

Next up? Your favourite: The monkeys. You love monkeys, Monkey. You saw the white-face capuchins almost as soon as we left the butterfly conservatory. You called them "baby monkeys", which I can only assume is because of your baby/mommy stuffed monkey. Some of them seemed to rush over to the edge of the cage, as if to say "hi!". Mommy found one that seemed to almost dance when it saw you.

Next to the capuchins was a cage with spider monkeys. One of them, you called "momma monkey", which Mommy and I couldn’t really understand. We laughed nonetheless. I thought it looked more like Chewbacca than anything else (wait a couple of years, and this will make more sense — I promise!).

Then down the stairs to the hummingbirds. La Paz has a series of feeders, and the entire area buzzed with small and large(r) birds all whizzing around. It was definitely something else to see as all these birds vied for time at the feeders. 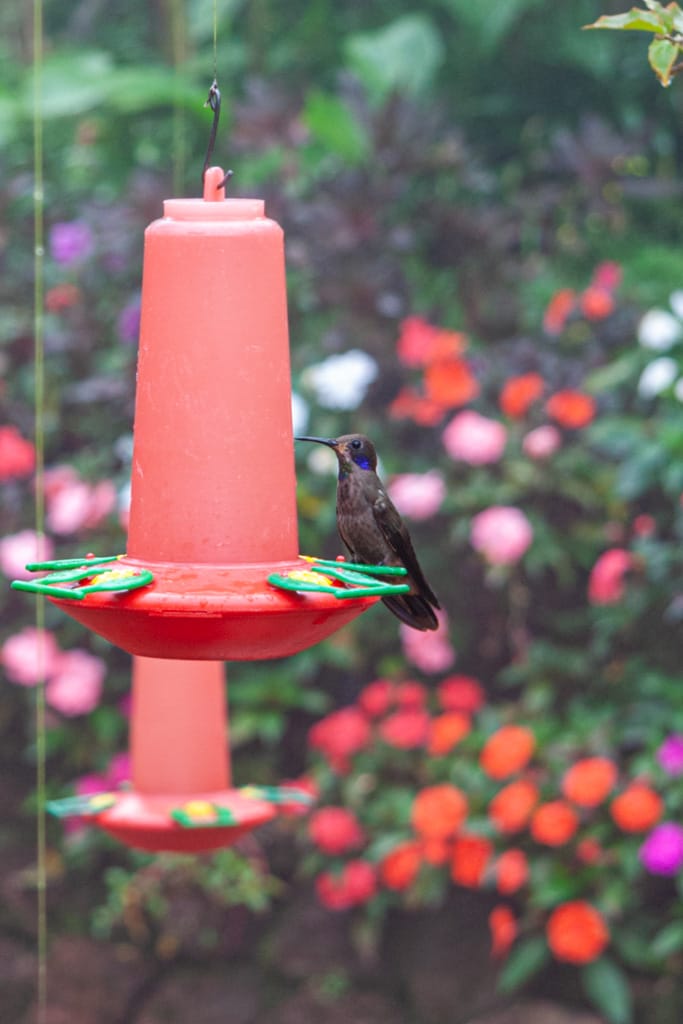 Further down the hill, we came to the "ranarium", which is where we found the second of your two most favourite animals: frogs. La Paz does a rather neat trick with their frog display — they let the frogs move about in a room filled with large-leaved plants, and then affix little signs with clips to tell you where the frogs are, and what species. None of them really moved while we were there, unfortunately, so we could only get the picture of them all curled up. 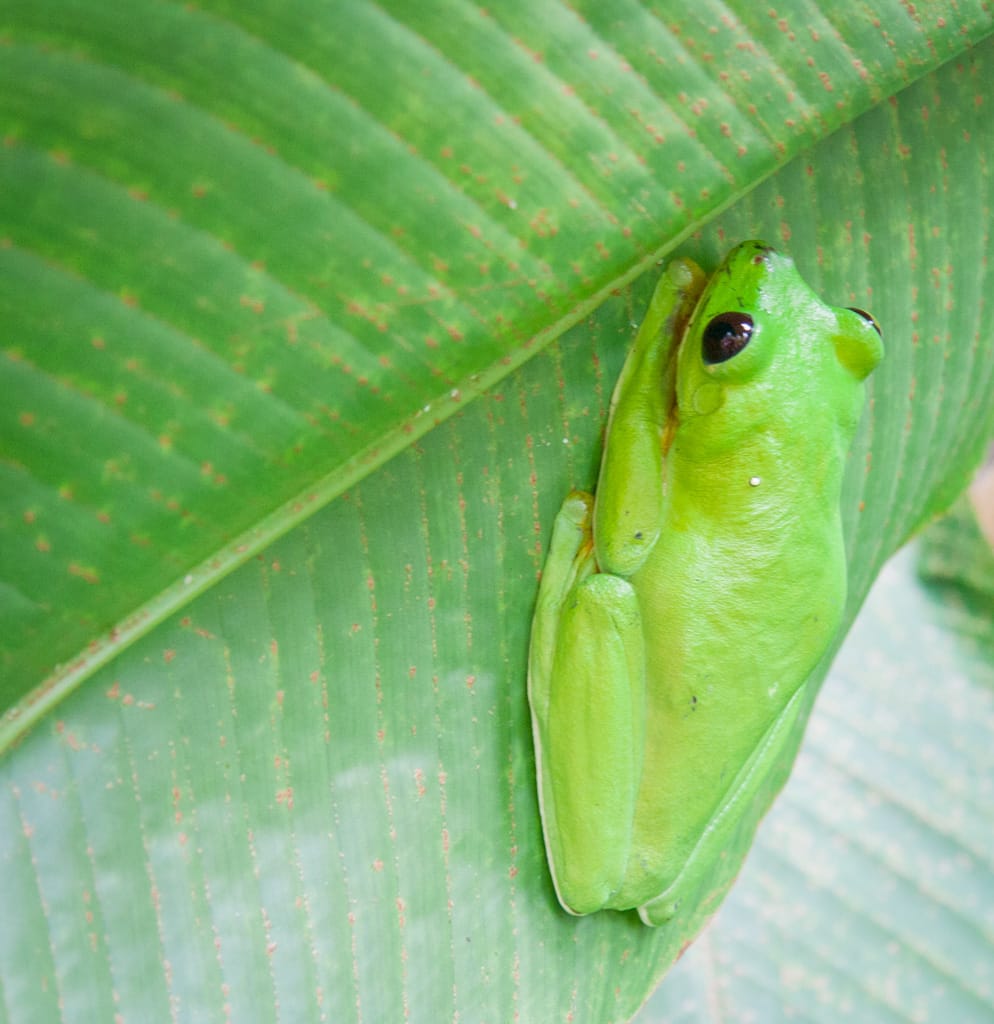 After a short walk, we came to a small wooden building, in front of which were a pair of bulls pulling an old-fashioned colourful coffee cart. Mommy and I put you in the cart, and then you and Mommy went for a short ride around the circular garden that was there. Mommy felt like she was going to fall out, but you seemed to love it.

Then came time to see the waterfalls. After all, why go to La Paz and not?

This was when it became really apparent that we couldn’t see everything. Only Temple and Magia Blanca’s trails are open — the others are still undergoing safety repairs. Still, it was a lot of steps down just to see Temple. (But it was infinitely easier than when we went to La Fortuna!) The earthquake damage was still clearly visible there, too — the greenery of other pictures I’ve seen was largely reduced to rock and soil. It might be decades before it looks as good as it once did. 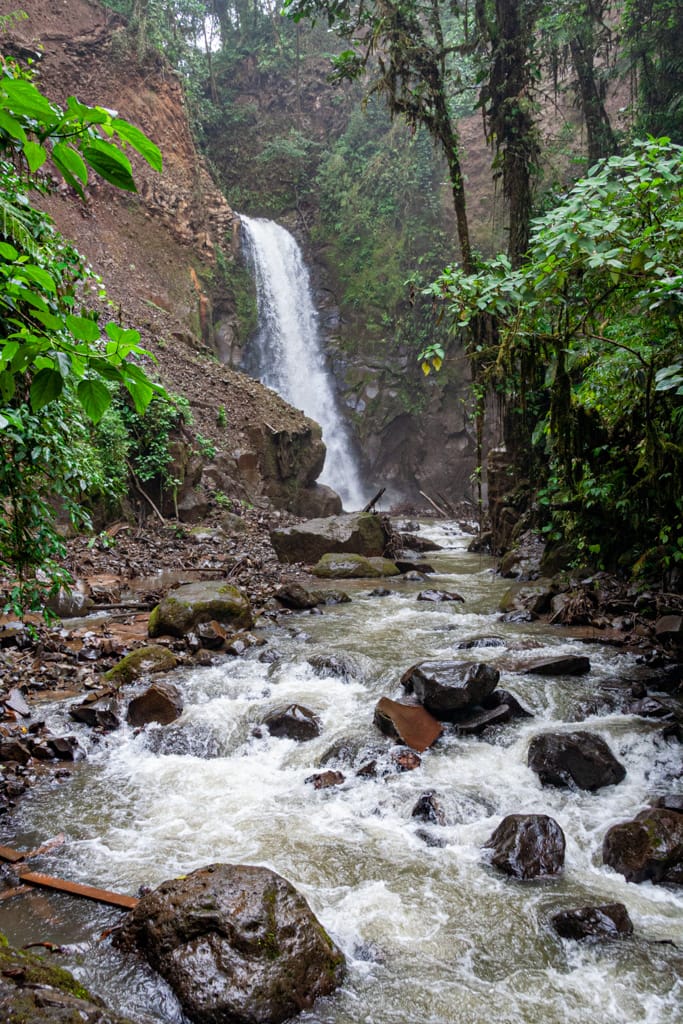 We decided not to see anything else and walked all the way back up. The man at the top of the stairs — who I think was actually La Paz’s owner — said you were a brave girl for climbing all those stairs!

We continued up the path to the Jungle Cats exhibit. Sadly, not much to see as the cats were ... well, doing what cats do best: sleep. That is, except for one cat. Either a mountain lion or a cougar. Admittedly, I’m not sure which it is. This cat had been curled up in a log, sleeping soundly, until you came by. You were probably calling out "kitty, kitty", when it opened its eyes and looked at you. Wherever you loved, it kept looking at you. Sizing you up. Deciding if you would be a good meal, or just a snack, I can only presume. Mommy told the kitty to "forget it".

Lunch was next. From there to the restaurant for a fairly pricey meal (7-8,000 colones for each of Mommy and I). The food was good, though, and you did eat a lot. You also made some friends. As we decided what to eat, a man younger than me walked over and asked to take your picture.

This is not the first time we’ve seen this, and Mommy and I are getting used to the fact that you attract a lot of attention. Let’s be honest, Monkey — you’re insanely cute and blond. It attracts a lot of people. You liked the first man, though — you weren’t much impressed by the others. Something I found a little amusing.

We stopped by the monkeys again after lunch, and one of them came right over to see you. If it hadn’t been for the double caging, the two of you might have been able to touch each other quite easily. The monkey seemed to like you — though hopefully not the same way the cougar did. It seemed cold and unhappy, which is not unsurprising. Although the cage is very large, and offers lots of room, it’s not the same as being in a jungle.

We went back through the butterfly conservatory to the aviary, as Mommy wanted more pictures of the toucans. (I wish I’d done the same, having seen my pictures now, and they’re just not as good as I’d hoped for. Such is life.) We headed back up to the main building, where Mommy got you a bracelet. You won’t be able to wear it for a couple of years, but maybe it’ll help you remember your life in Costa Rica.

The trip back was foggy and wet — it rained most of the time. You don’t remember — you slept almost all the way back into Alajuela. We saw where construction is still ongoing, as they try to fix all the roads. Some areas probably still look no different then when the earthquake hit. It’s a scary sight.

Next weekend should be different again! When Grandpa and Granny get here, we’re going back up to Villa Blanca again. You’ll see more hummingbirds, and you’ll get to spend lots of time with Grandpa, too! And with any luck, Mommy and I will get to relax a little.