Well, Monkey, the last week’s been quite the slog. Last Saturday, you started showing signs of being sick, having caught something from one of your schoolmates. It basically turned you into a bonafide snot factory. (One upside: you’ve learned how to wipe your own nose. Now if we can just figure out how to make you blow it, too.)

The bug hit me next, kicking in on Tuesday, and then taking me down on Thursday and half of Friday (I didn’t sleep at all Monday, Tuesday, or Wednesday nights, partly due to your coughing and partly due to feeling so crappy.) Mommy caught it next, and her illness really kicked in on Friday, and is just coming out of her illness today.

The group of us effectively played "Sick Family Robinson", holing up and trying to keep our wits, all the while trying not to spread the sickness to Grandma.

It’s not been an easy week. Even just the last four days have felt twice as long as they should. Part of being sick, but also from helping keep things moving here. Grandma has helped considerably, and I suppose in an odd way it’s been extremely helpful that she’s come down at what would normally be considered an inopportune time.

Mommy needed some time to herself today, so I offered to take you and Grandma out for an excursion. Despite having lived in Costa Rica for over a year now, we’d yet to do any form of a coffee tour. Although the Café Britt tour is quite close to us, just over in Heredia, we’d been warned against it by Mark, Jason, and Jen, who declared it "horrible".

Thankfully, nearly a year ago Mommy and I had seen a sign that said "The Real Coffee Tour" while on our way up to Arenal. Presumably, the "Real Coffee Tour" moniker is used to combat Café Britt’s much more well-known tour.It kind of stuck in my head, and today (with the help of a guide book) we hunted it down a few kilometres north of Cuidad de Alajuela.

The tour takes place at the Doka Estate Farm in San Isidro, a not-particularly well-marked location on maps. In fact, if it were not for the very well-placed signs on the right, chances are we’d have had a tough time finding the place. As this is the off-season for tourists, the parking lot at 9:40 this morning was nigh-empty, and we were met by the friendly guard who ushered us to the shop and restaurant to buy tickets for the tour.

We still had a number of minutes before we started, so the highly bilingual shopkeeper led us to the butterfly enclosure they have on-site. You’ve been to a few butterfly farms, kiddo, but you seemed to have the most fun in this one. (Well, at least that I’ve seen.) You were running around the circular enclosure, constantly chattering to have Grandma and I keep up.

When it came time for the tour to start, we were joined by a family of four from Seattle. Our guide, whose name I’m just realising we never got, was either a worker who moonlighted as a guide during the rest of the year, or possibly one of the family who own the coffee farm. At any rate, he spoke very good English, and was very good at explaining a few things about coffee making I had not been previously aware of. 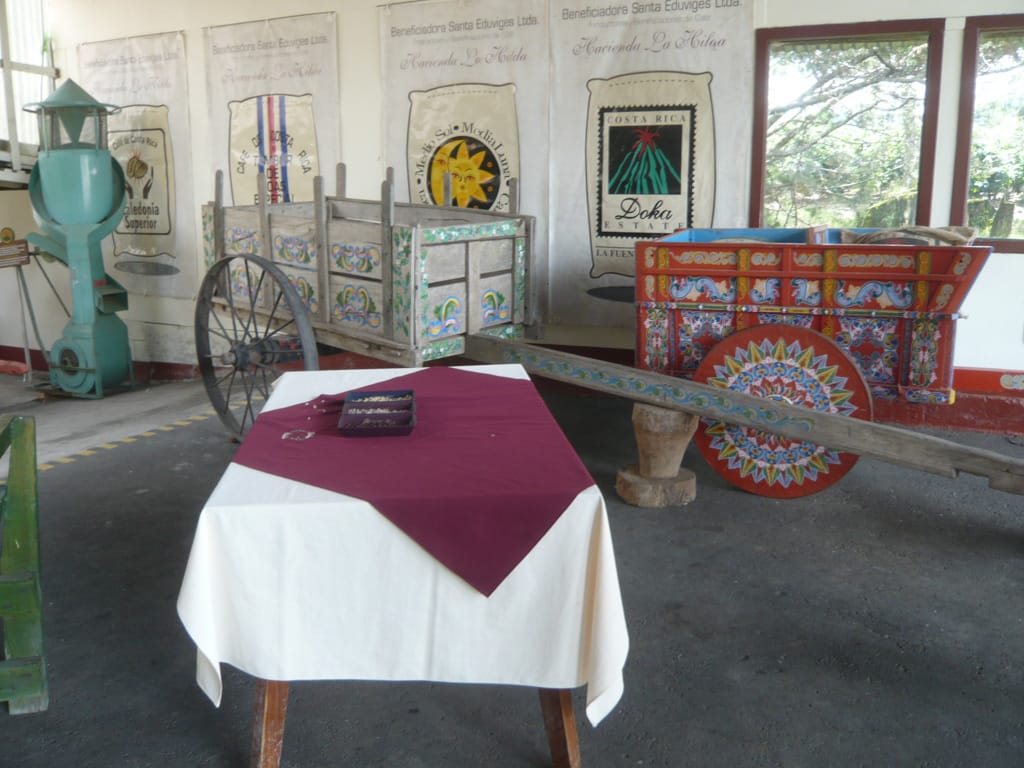 For example, the only coffee that grows in Costa Rica is arabica. This is, apparently, a law. Mind you, the specific version of arabica in Costa Rica is known by another name. The plants are seeded, which takes nearly three months just to see sprouting. This leads to a properly leaf structure after nearly eight months, at which time the plant is moved to a potting bag for another two years. It’s nearly three years before a single plant might turn a single coffee cherry.

(Yes, coffee is actually a cherry.)

While the coffee plants grow year-round, they only offer beans during a three-month period, lasting from roughly November to January (at least here in Costa Rica). During that time, a huge migrant population (which these days seems to be largely Nicaraguan) moves in for the picking. A single picker can earn as much as $3,000 for the season, which is enough to last an entire family a whole year.

Coffee is picked in a special basket that is a defined size (similar in concept to a "bushel"), which denotes how much coffee is put in a sack. It’s a counting thing. It sounds like overkill, but when you realise that there are 500,000 acres (over 2,000 square kilometres)of coffee, it’s probably not a bad idea of have some sense of control. It didn’t look particular comfortable — it’s about 25 kilos completely full — but I imagine it’s efficient.

The guide also explained that the coffee fields are often dotted with other plants, such as bananas, mangoes, avocados, and so forth. These plants help control the minerals in the soil, as well as provide some shade for the coffee (which apparently is needed at higher altitudes). They also help offset some of the non-coffee season with (albeit substantially lesser) income.

He also explained that the rains are a significant part of coffee-growing. Coffee, like rice or cotton, is a very water-intensive plant. In lieu of irrigation (which is very expensive), coffee tends to only grow in places that have even (and warm) temperatures year-round, and a lot of rain. So when people talk about "bad growing seasons", they’re not saying it got cold — they’re saying it didn’t rain enough.

This is what I picked up when I wasn’t having to keep you from disappearing down the rows of coffee shrubs. I’m sure you’d have marched right into the middle of their 50-odd acre farm (just that location; they apparently have several) and likely covered yourself in dirt doing so.

I do need to add that you weren’t a lot of trouble today, Monkey, but you were a handful.

From the fields, we went into the sorting and separating house. This is a building that’s now on Costa Rica’s historic register. Even though the farm itself isn’t 100 years old, there aren’t a lot of buildings in Costa Rica older than 100 years — earthquakes tend to batter them around a lot. This one seemed old, but unlike the defunct grain elevators across Canada’s prairies, this building is still in use. Well, for three months of the year, anyway. 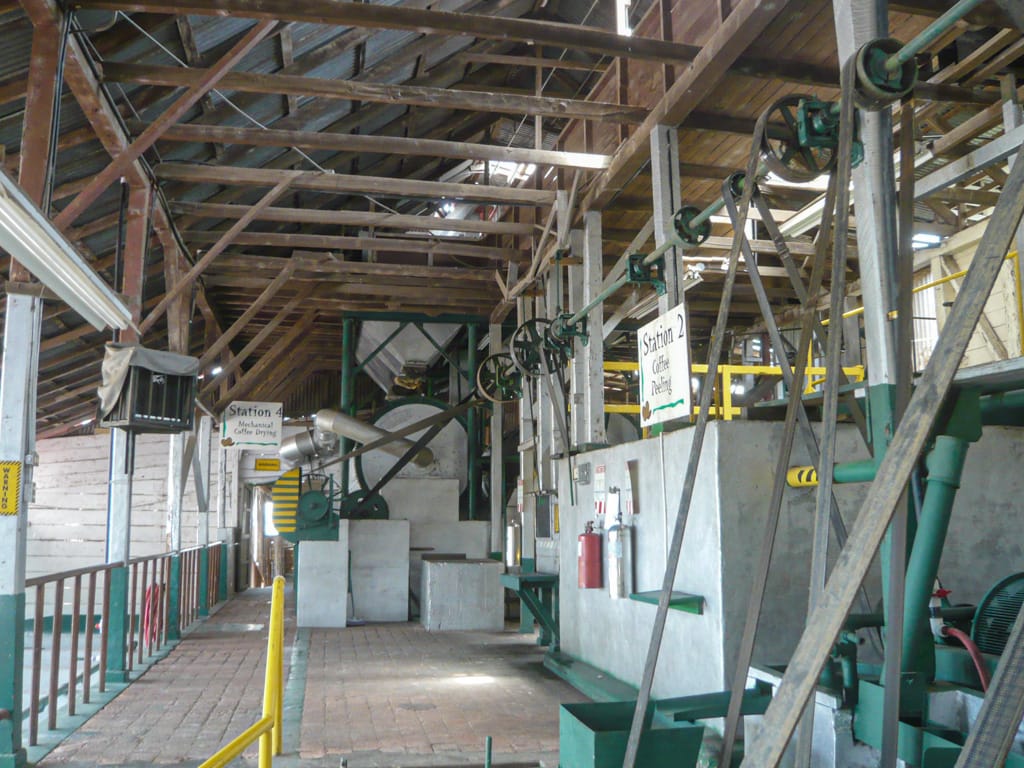 Coffee is brought in and sorted, using water. (Good cherries sink, bad ones float.) The good cherries are then put through a series of pitting machines that force out all the coffee beans. These are then washed, dried, and stored in sacks. All of the water, and the power needed to drive all the machines, comes from a high-pressure well found on-site. It’s a pretty slick system that involves no fossil fuels whatsoever. (And this before everyone went green!)

The sacks are kept for no more than three days before being put out in the sun (conveniently, picking season is also when it doesn’t rain in Costa Rica) to finish completely drying. Only then can they be packed and shipped to their purchasers. Only about 10% of the farm’s take is actually roasted and sold in the country. 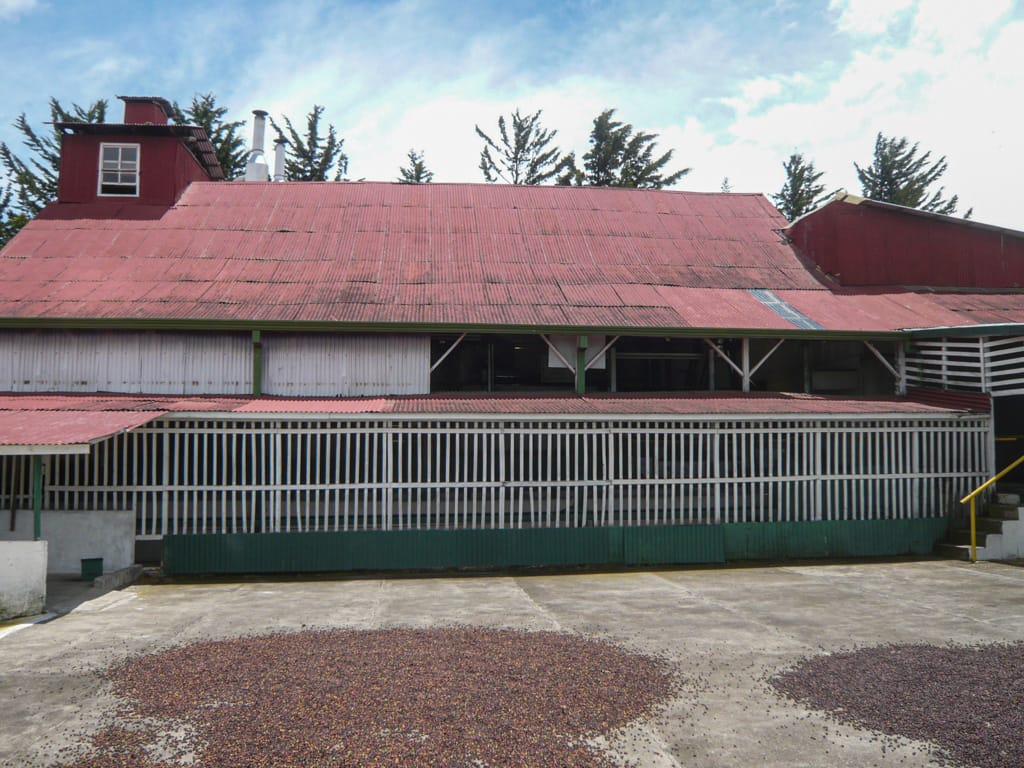 About 50% of their coffee goes to one company.Care to guess? Starbucks.

After a quick trip through the gift shop (we were running low on coffee at home, and you really felt the need for a quick sip-or-three of espresso), we headed home.

Sadly, you slept in the car, which seemed to utterly negate your ability to nap in the afternoon. So you slept a grand total of about 20 minutes today. Which made you quite a handful this afternoon. But not as difficult as you were last night, though I’m told it’s because I got too fancy with dinner. Oops.

Anyway, we’re all almost back to normal. And your second birthday comes in just a few days! Hopefully, kiddo, this will be a much better week for all of us!