Right now on this very week, back in Calgary, AB, is the Calgary Stampede. It’s the largest outdoor show in the world (at least that’s the story). It usually means a massive influx of cowboy- and cowgirl-wannabes (among the real McCoy, mind you, which the Stampede also attracts in large numbers), a lot of public drunkenness. A lot of Calgarians happen to take vacation during Stampede week, for obvious reasons.

One thing the Stampede is also famous for is something that doesn’t actually happen at the Stampede — it happens just about everywhere else in the city: the Stampede pancake breakfast. It’s a tradition dating back decades, supposedly started when one kind rancher shared his breakfast with those around him.

There’s only two rules with pancake breakfasts: have a lot of people, and it should be free! (There are even websites to help people find the pancakes.)

To be honest, I don’t know who thought of it first, Alex or me. Despite the fact that we have pancakes nearly every weekend (it’s a tradition for us), there’s just something about making pancakes for others that really stuck with me. I missed it last year, and I wasn’t keen on missing another, so it was decided that The Hangar Interactive would have it’s first (hopefully to be annual) Stampede Breakfast.

The hardest part of all of this was finding the cooking surface. At home, I have to use two pans to make pancakes relatively quickly. Otherwise it just takes too long. Making pancakes for almost 40 people? You need a gas-fired grill if you have any hope of keeping up with demand.

This is where we almost had a "lost in translation" moment. Despite living here nearly a year, my Spanish is still pretty poor, especially spoken. And there’s no Stephenson’s Rentals that I’ve come across. So find a grill to rent isn’t easy. Angelica, our super-awesome office coordinator, was tasked with the act of finding one.

This is what I’d asked:

I need a grill. Like the ones you see at the markets that make pupusas.

This is what Angelica heard:

I need someone to make pupusas.

The worst part? We both nodded and thought the other person understood what we’d both agreed to. It was until two days ago that we both realised where we’d gone wrong. The grill was acquired within a coupe of hours.

Next? The supplies. None of this Bisquik crap, thank you. I make my pancakes from scratch. They’re really good, too. It’s an old family recipe, handed down through generations, and originally stolen from a cookbook (so I’m told).

Mix dry. Mix wet. Combine. Pour onto hot (and preferably non-stick) surface to cook, flip when the bubbles form. Repeat until all the batter is gone. Will make 8-10 pancakes depending on the size. When you’re making pancakes for 40 people, you need a bit more… 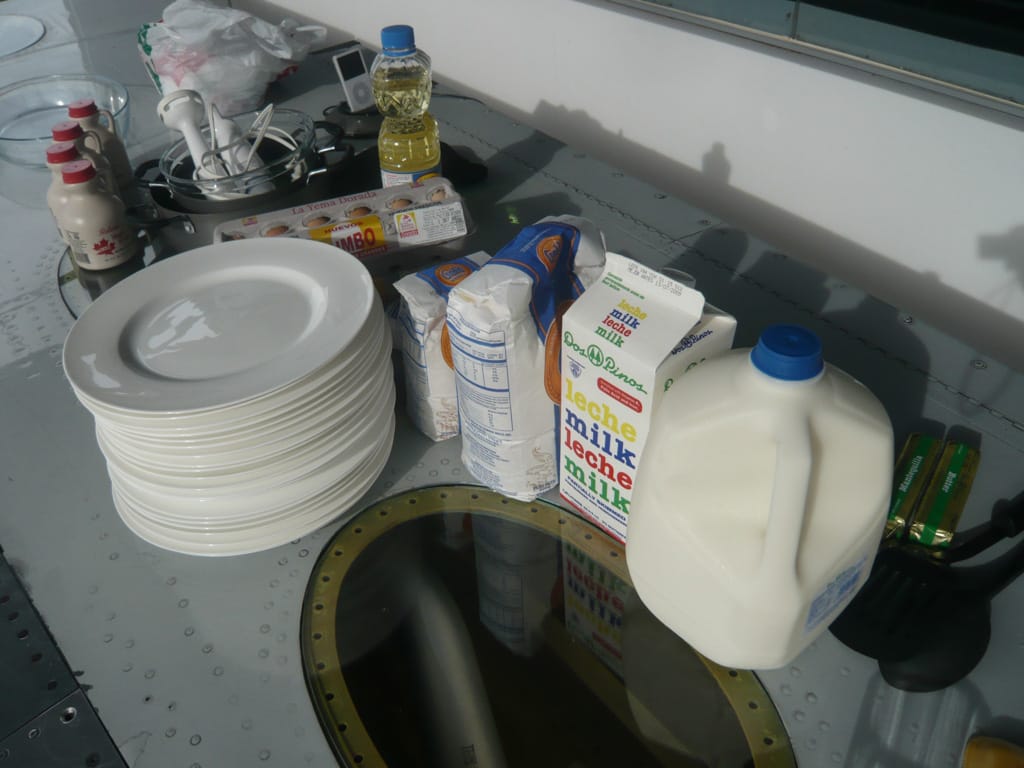 Now that’s just the pancakes. That won’t get you the full Stampede appeal. For that, you need sausages, too. (Six packages of Johnsonville Breakfast Sausage, a total of 84.) And since I’m Canadian, I cannot abide by maple-flavoured corn syrup. It’s just horribly wrong. So I splurged and bought enough real maple syrup — four bottles — for everyone at The Hangar. And yes, at ~$30 a bottle (the stuff’s imported), it was still worth it … even though the syrup alone cost about 2/3 of the budget.

Ed, our QA Director, was invaluable as help. He helped get the grill going, cooked the sausages, and we did the oil & batter dance (handing the various cooking implements and materials back and forth as we made the pancakes). Needless to say, I wouldn’t have been able to do all this on my own. 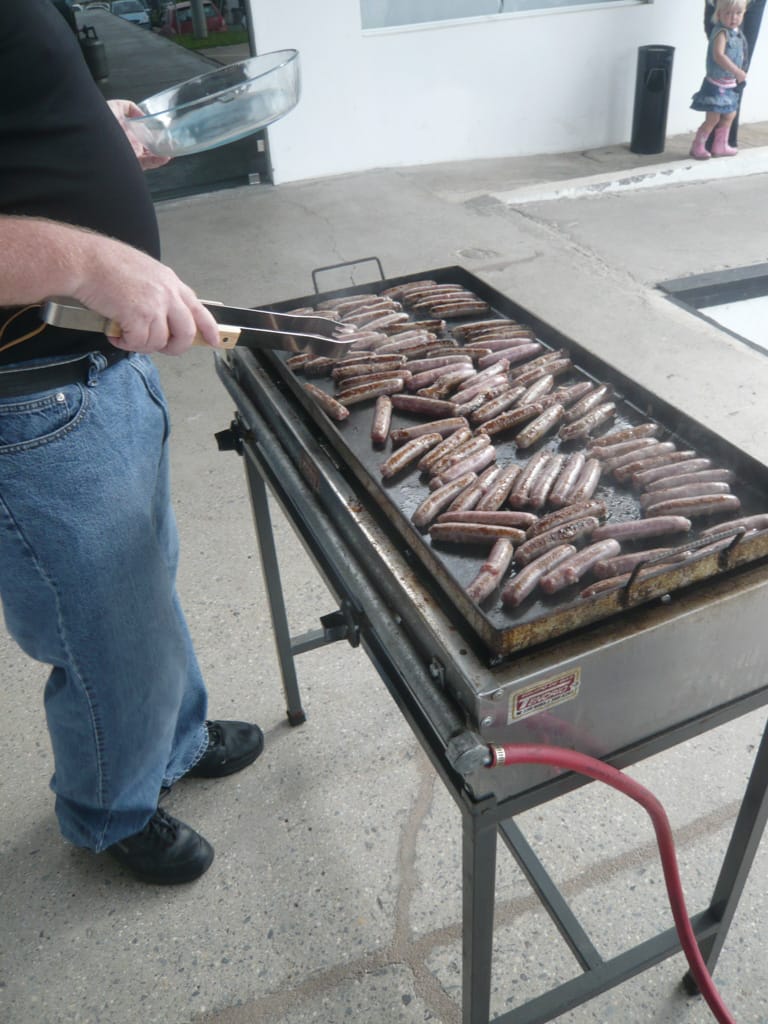 The grill smelled of fish. It’s likely that this grill has been used to cook countless different things. But as always, when you cook fish, the oils get into the iron and they stay there. You never really get rid of the smell. Not that it was a major issue, nor did breakfast taste of fish. But my shirt reeks of cooking oil. (Thankfully, I brought a spare.)

Even Alex and Mi Pequeña Niña came out (I needed to drive the supplies to work, they need the car, and c’mon — it’s a pancake breakfast!), though I didn’t get to see them too much.

So our Tico staff got their first taste of Canadiana (or Calgaryana, depending on how you look at it). Next year should be an even better affair, hopefully! 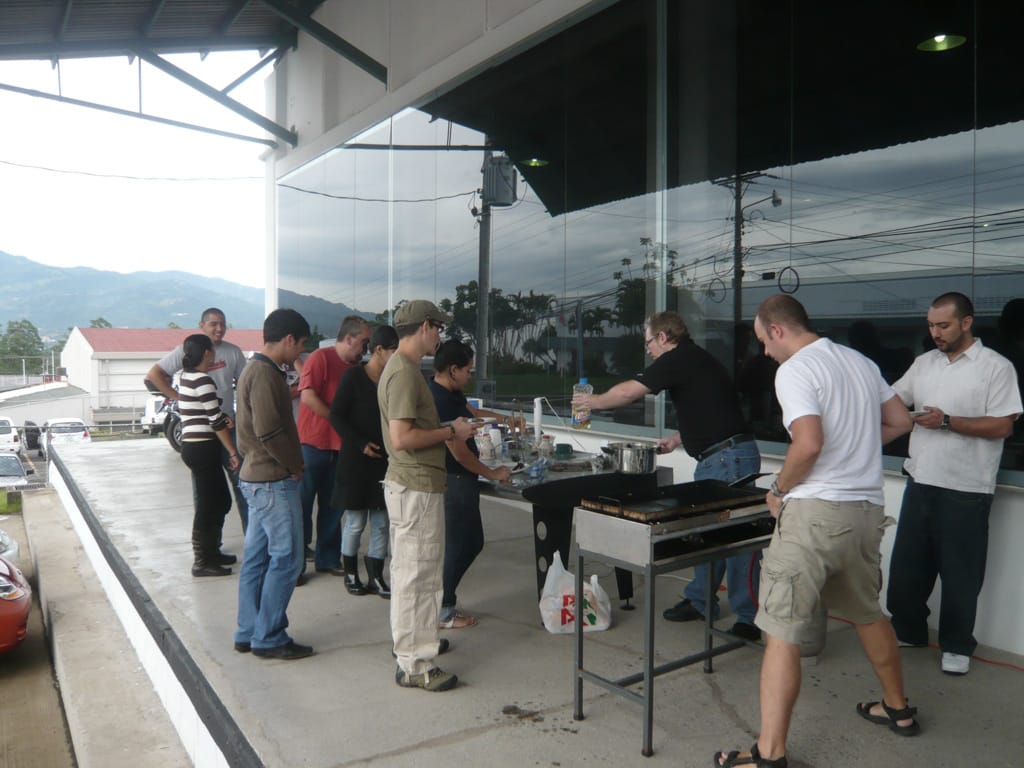