Alex’s birthday was yesterday (she just turned 29, in case you’re keeping track … ‘cuz we’re not), and as tradition holds, she got to choose where we went to celebrate.

Well, at least it’s a tradition we’re going to try to restart and keep going, anyway.

She did some reasearch and chose a place up in the cloud forest called Villa Blanca. The pictures we saw online of the place looked nice, but as we’ve found a few times — the pictures often look better than the real thing.

It was nice to find an exception to the rule.

Finding this place was not so much difficult as it was an adventure. Thankfully, Allen and Jean were down for a visit (nicely timed, I should add), so they offered to take Mi Pequeña Niña for the weekend while we took off. It would be the first time both of us were separated from her “just ‘cuz”.

After kissing the wee one goodbye (it took a bit of prying to get Alex to actually leave), we headed out to Highway 1, and bore west to San Ramón in Alajuela. This was not our destination — just a point where we ceased travelling west and turned north.

The instructions we had to get to Villa Blanca were typically Costa Rican — lots of landmarks with too much information. It would have been easier if we were just told to drive north out of San Ramón, following the signs to the Arenal Volcano (for some reason, Costa Rica loves to point out where the volcanoes are), then turn when we got to Los Angeles.

Of course, we didn’t know that we turned in Los Angeles, because there’s no way to know that the village is called “Los Angeles”. As usual, there are almost no signs for the small villages you pass through. I have yet to understand why.

As we exited San Ramón, we headed into quasi-familiar territory. We’d been on the road twice before, once in 2005 driving north to Arenal (a trip that neither Alex or I remember particularly well), and once a few months ago driving south from Arenal. This time, I knew where we were. Alex didn’t … right until we got to the gift shop.

This would be our third visit to this particular place, and it’s actually one of the better gift shops I’ve been in. Not too much hokey stuff, and the prices (although meant for tourists) aren’t outrageous. I found another monkey shirt for myself (MPN loves monkeys on my shirts — I need more monkey shirts), and Alex acquired shirts for her and MPN.

We knew we were going to have to turn off the road when we got to the “double speed bumps next to the police station” (although this sounds really vague, it’s a good description for what you’ll find), but we didn’t know what it was going to be like.

The road we turned onto was narrow (barely two cars wide — and I mean without any space between the cars), potholed, and paved using what had to have been either substandard asphalt or substandard road-making machines.

Every so often, a road sign let us know that we had to keep driving … and to watch out for cattle and other cars, and to drive with our headlights on. This might seem like something rather odd to put on a sign, but in the cloud forest, this is just sage advice.

The cloud forest is a term to refer to the weather patterns in the area. Clouds don’t actually grow here, but the area is often mired in clouds. Not fog — that’s very different — I mean clouds. You can see them rolling over the hills. It’s not due to altitude so much as it is the way the weather forms. The area is usually shrouded in clouds, particularly this time of the year.

I know what you’re thinking: Wow, that sounds really drab.

It’s anything but. The area here is greener than anything else outside of a rainforest, and has its own type of forest that is — duh — watered by the endless stream of clouds running through it. Spanish moss covers most of the trees, and collects moisture that drips down to the ground. It’s very symbiotic.

We drove until we ran out of road, and came to the entrance of Villa Blanca itself. Villa Blanca is surrounded by the Los Angeles Private Biological Reserve, though it’s not easy to tell where one ends and the other begins. 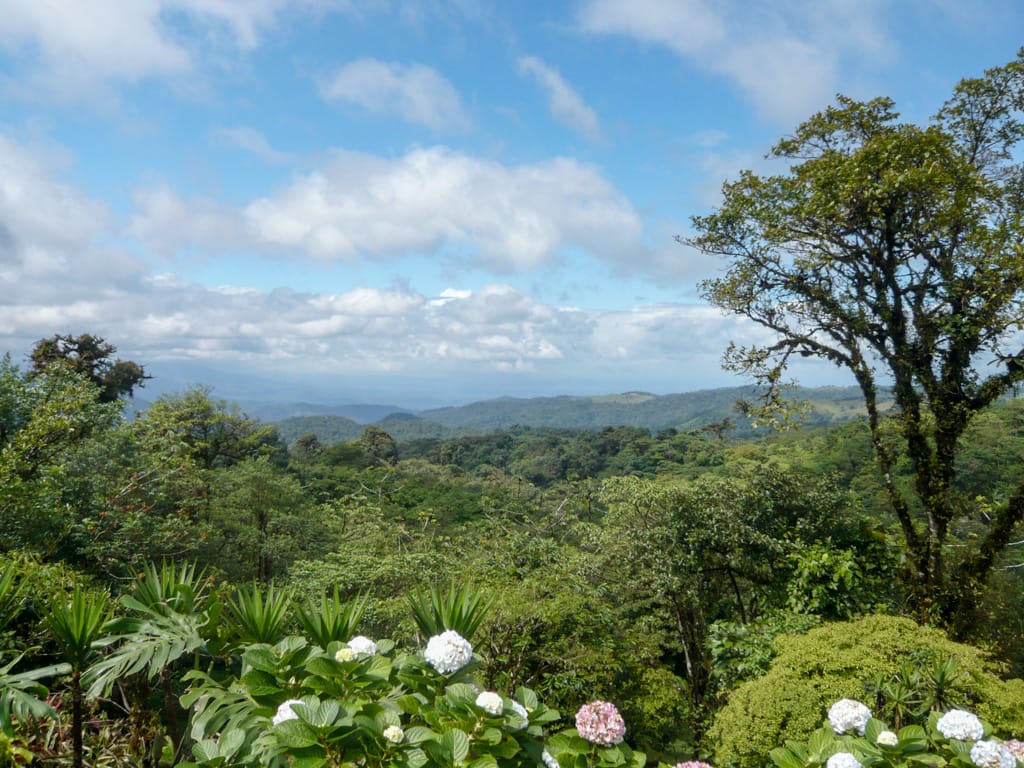 There aren’t many buildings inside Villa Blanca. The most notable are the wedding chapel (built in 1997, with a wonderful ceiling made of hand-painted tiles), and the main building that contains the lounge, restaurant, movie theatre (sadly out of service at the time), gift shop, and game room. The other buildings are mostly the cabinas (they are like miniature craftsman-style homes), and a couple of INBio ranger offices tucked into the woods.

You can only drive to the parking lot. After that, you’re on foot.

Clouds socked in all around us when we arrived, but we were treated to an almost-angelic parting while we ate lunch (our room wasn’t ready yet). I saw in another picture that from Villa Blanca — likely on the very rare clear days — you can see all the Arenal volcano. 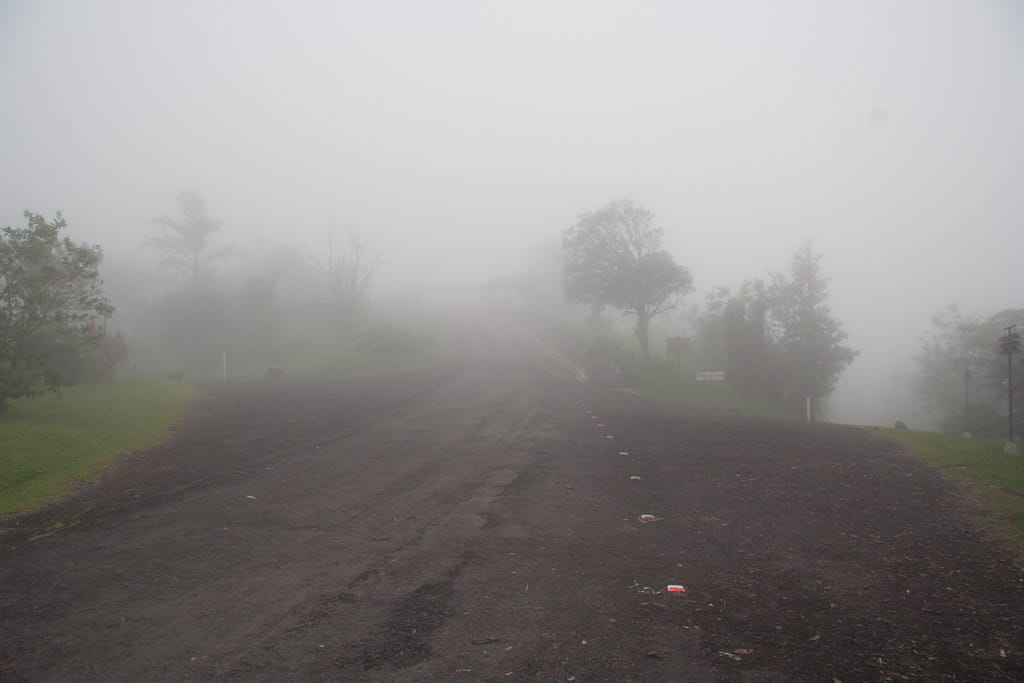 The cabina — number 28 — was right out of the 1930s craftsman homes. Fantastic. Wonderful. Comfy. I immediately regretted not being there for more than one night. But I was okay with that — I was already missing Mi Pequeña Niña quite badly. (As was Alex, but I chose not to say anything as not to make her feel worse.)

We walked through a jungle path in the afternoon, which wrapped around the edge of the property through a very green and very mossy forest. We saw several hummingbirds (thankfully, hummingbirds aren’t carniverous — those things would be nasty if they craved blood), and a lot of very damp trees.

Including one called a “snot tree”. No joke.

Along the way, we got bitten several times by … well, we’re not sure by what. They weren’t mosquitoes — we would have felt them, and the bite mark left was missing flesh. Yet we never felt a thing. It was very strange. None of the staff seemed to know what they were, either.

That evening, we went for a “Nocturnal Nature Walk”, which runs through one of the “guides-only” paths at Villa Blanca. We started at around 18:00, when the sun had effectively set, and all walked out with flashlights in hand, to see what we could see.

The guide, whose name sounded like “Graybing”, was very familiar with the local flora and fauna, and was able to identify just about everything we saw. He knew the species, what they were like, how they mated, and eating habits. He also make sure that we didn’t touch any animal we found (some insects secrete poisons that cause serious rashes or even cyanide, and disturbing the animals is just generally bad).

Alex found the first curiousity of the night — a lightning bug that glowed a green light you would normally associate with a little green LED. Then it was onto a jungle trail that you could walk in about 20 minutes. It took us almost 90 minutes, because we went step-by-step, searching for anything. Several insects, five types of frogs, and a lot of questions. 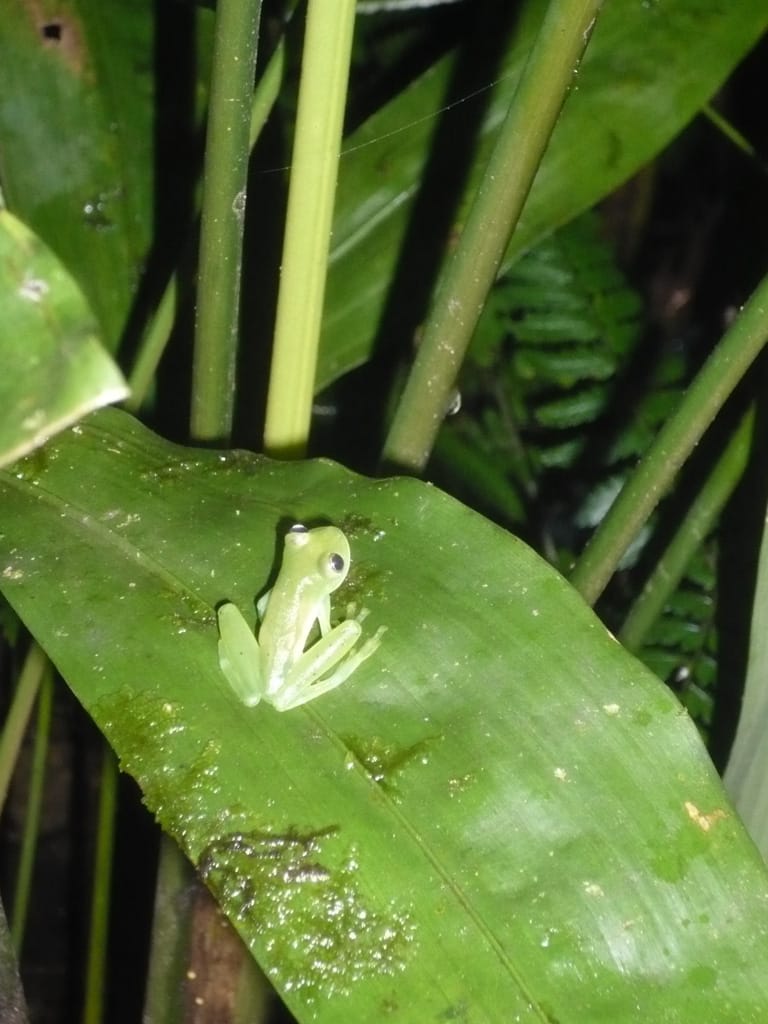 The meals at the restaurant were fantastic, and reasonably priced given the monopoly on food service (you’re 30 minutes from Los Angeles, and it’s not a road you want to travel at night). The staff are very nice and fluent in English (handy for tourists, and even for us since we had a few questions regarding the menu). 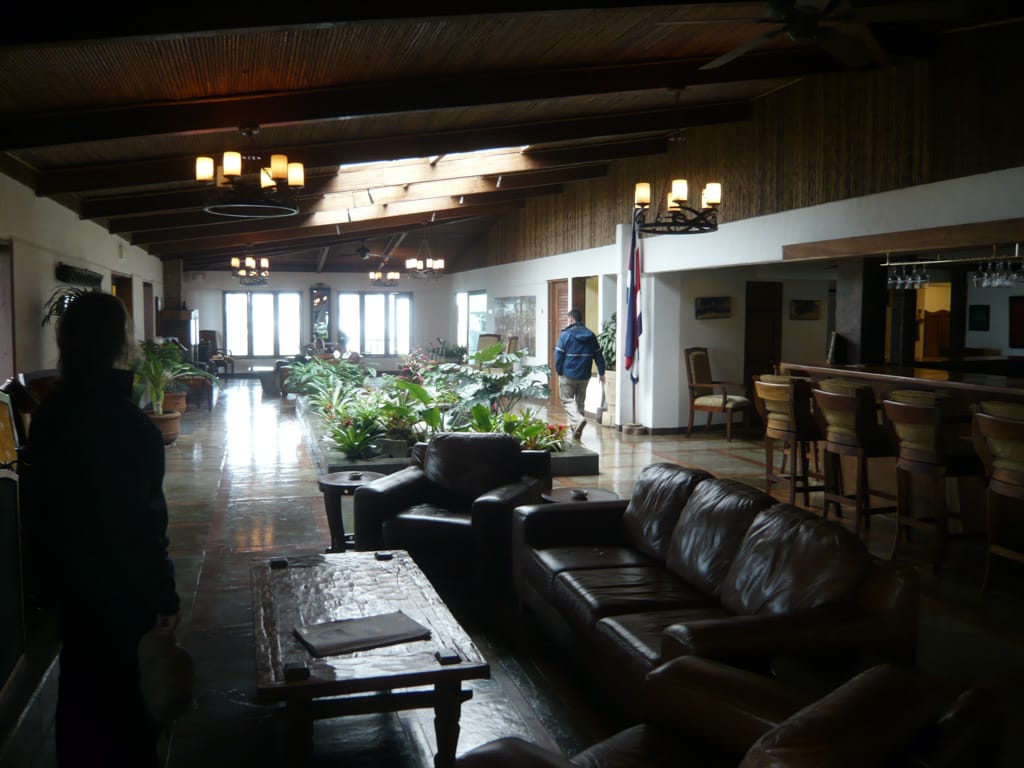 The way back home was marked with lunch at the restaurant next to the gift shop south of Los Angeles, and a detour through Palmeres south to Atenas. That was right through the middle of the Palmeres Festival, which we’d forgotten about until we were stuck in the middle of it.

The Palmeres Festival is similar to the Calgary Stampede, at least insofar as the midway and the parking jockeys are concerned. Only that the jockeys here are so agressive that they chase your car in hopes you’ll go into their lot. Crazy people, I tell ya…

The road from Palmeres to Atena is marked with many signs that read: “Curvas Peligras Adelante” (dangerous curves ahead). “Hairpin” doesn’t quite cut it, and going at any speed above 25 km/h is just asking for trouble.

Once in Atenas, we continued east back to home, a route we’re slightly familiar with from our trip to Punta Leona back in July.

Overall, it’s a highly recommended place in my books, and Alex and I would love to try go back to Villa Blanca again. With or without MPN is another question…