We might not have spent Christmas in Costa Rica this year, but we sure as heck spent New Years here. Not that we went out for any sort of partying, I should say — things in Costa Rica are a little different than back in North America.

Up north, it’s about the party — everyone goes out, whoops it up, suffers through the hangover the following day. Here, it’s a chance for family to be close together (most of the bars close at 23:00, apparently) and shoot off fireworks.

We’d heard about the fireworks, but in truthful honesty, we didn’t really know what that meant. When I was a lad, it meant that come Canada Day, your parents went to the corner store, stocked up on roman candles, sparkers, Burning Schoolhouses (and snakes, if you were into that sort of thing), and everyone had a grand time firing off burning ejecta into the sky.

Of course, paranoid safety regulations (instead of the much-preferred common sense) led to Canucks not being able to get fireworks much anymore. You still can, but it ain’t easy. And most of them are pretty pathetic, if you ask me. If you want to see anything really good, you end up being at the mercy of your local municipality to organise something, or travel to a fireworks competition.

Or buy a lot of stuff black market, run out to the middle of a field where it’s hard to be caught, set ’em off, and run before the cops show up.

Reason #15 why I love Costa Rica? No regulations on fireworks: Buy what you want, set it off whenever you want. Even if it means well past midnight. Or at least that’s the way it seems to be.

Things started here last night around 20:00, when we heard our first bangs. Some of them were mere noisemakers — lob something explosive in the sky, it makes a loud bang with a short burst of light. That’s it. No sparkly things, no whizzing, no streaks. But then the larger, more colourful ones started appearing all around. By 21:30, I was marching up the hill to see what I could see.

It wasn’t much, but it was clear that New Year’s Eve in Costa Rica is a bright affair. At least, what I could see. Our condo complex has an amazing view of part of the Central Valley, and it’s easy to see a huge swath of the area to the north of us. There were the odd pops here and there, a few bright lights, and the odd whiz. Given, it was still pretty early, but revellers were getting started.

I retreated to the condo for a while, not wanting to fill the memory card on my camera with idle shutter-clicking. I had a feeling that midnight might be something else.

Despite Alex nearly falling asleep, we watched the ball drop in New York City at 23:00 (we have an NBC station from the Big Apple — yay satellite television!), which was really neat to watch as we’d seen the ball’s location only three days earlier. We’d seen all the people, and had a real idea of what Time Square must be like with everyone waiting for midnight. But they were much colder than we’d been, and I was glad to still be wearing my shorts.

Just after 23:30, I marched back up the hill to wait for midnight in Costa Rica. Although Alex went to sleep (she kept the window and blinds open), I was not alone — many families had also come to the hilltop to wait for the event. Sure enough, it wasn’t long before more and more large fireworks could be seen and heard. Over the mountains, I’m certain something large was happening in Escazu — I couldn’t see the fireworks, but the flashes and the banging carried over pretty well.

Down in downtown Santa Ana, someone had gathered together a lot of firepower, and it was brightening up that part of the sky, too. To the west of us, one of the developments kept throwing up great big bursts of colour. To the north, I could see seemingly random stars appearing over the streetlights.

But those were nothing compared to what happened at midnight. Well, actually, just after midnight. The exactness of midnight isn’t a big concern in Costa Rica. As with all things time-related, punctuality doesn’t seem to be that big of a concern.

At midnight, everyone who had something left lit the fuse. Suddenly, the whole valley seemed to erupt with brilliant reds, greens, whites, purples, yellows, and blues. Banging, popping, whirling, whizzing, and cracking could be heard from nearly every direction (including behind us, up a wooded hill!), and the 30-odd kilometres across the valley to the other side.

I snapped as many pictures as I could, all the while looking around in amazement. I felt bad for not bringing Alex up. Next year, for sure. Just when I thought it was all over, and I started to head back to the apartment, our complex seemed to realise it was after midnight, and started setting off their stuff. As it turned out, it was our downstairs neighbours. And they had quite the powderkeg of firepower.

The banging woke — to no surprise — woke Mi Pequeña Niña. Apparently, in a panicked screaming. Alex brought her to our bed, where the two of them watched the flashes and explosions until I returned. We had to wait until they finally ran out of gunpowder-enhanced goodness before we could all consider going to bed. 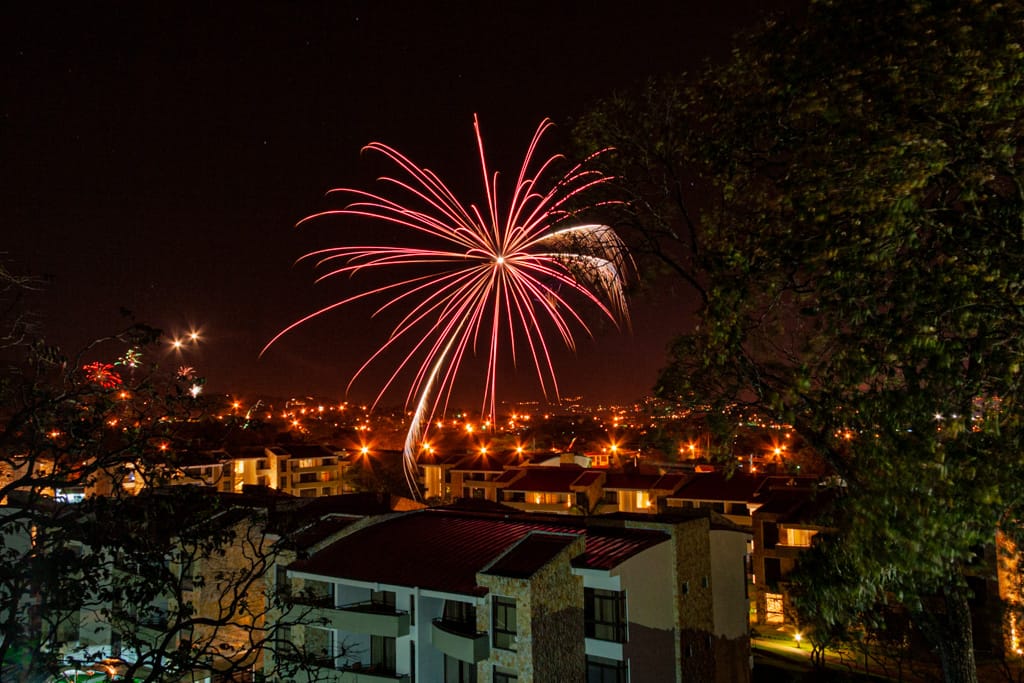 The revelling continued unabated, though. We went to sleep still listening to pops and bangs, seeing the odd flash.

I can’t wait until next year!