Our first family Christmas away from Canada has ended up being colder than we expected it to be a mere couple of months ago. Back then, we were expecting to be in Costa Rica. But due to certain unforeseen circumstances, we’ve had to fly up north for Christmas.

Well, actually, the fact that we flew to New York City is itself a bit of a twist — we hadn’t planned to come here for Christmas until about a month ago. Until then, we were working on someplace a lot warmer. In the act of researching flights, I happened to throw out New York City mostly as a joke. I mean, we’ve been living in a tropical country for six months. Why on Earth would we fly five hours north to free our asses off?

New York City at Christmastime is one of those Hollywood-created myths. Everyone has heard of it (sort of like Paris in the Spring), but few (compared to the population of the planet, keep in mind) have actually done. Knowing full well that it would be a lot colder than the weather we’d been experiencing for months, we decided that this year, we’d do something fun. (And because next year, our darling baby daughter will officially have to occupy a seat of her own at full price.)

The taxi rojo met us just outside out building, and the driver helped me load all our things into the trunk: my backpack full of our clothes, our two carry-ons, and the Bugaboo (the stroller). Yes, folks, we travel light. Even when it’s cold on the other end. The driver spoke about as much English as I speak Spanish, but we managed to converse enough for the ride to the airport. Apparently, we were the driver’s fourth fare to the airport that morning.

Our Continental Airlines flight left Juan Santamaria Airport yesterday at about 13:20. Or rather, it was supposed to leave at 13:20. Due (most likely) to the weather of the last couple of days, the flight was delayed 30 minutes when we checked in. This was not a good sign, as Mi Pequeña Niña did not have her morning nap so she would be nice and tired for the five hours of flight. She’s become a very active 16-month old kid, and keeping her confined in a small airplane seat for a long period of time is not fun.

By the time we finally boarded, we were 40 minutes behind schedule. By the time we were taxied and ready to take off, over an hour. But we were finally airborne and on our way. Twenty minutes after that, our daughter was sprawled across our two laps, sound asleep. It was a little chilly on the plane, and we opted to ask for a blanket from a passing flight attendant. Somehow, someone managed to get a holstein to look human, ‘cuz this cow was certainly a piece of work. It was, without question, the most unhelpful flight attendant I’d experienced in years and went out of her way to make it sound like this was a serious problem rather than part of the reason we paid out a ridiculous sum of money to fly.

Maybe 90 minutes. That’s all she slept, and was soon awake and full of energy. Keeping a child calm and unwound for over three hours in a confined space? Not easy. The flight itself was otherwise uneventful, though for reasons I don’t understand there was a non-stop line for the toilets almost the entire flight. People were pushing and shoving to get their way out (connections, I can only assume), and I was just plain tired.

Immigration was relatively easy (the poor woman ahead of us was trying to get home to Toronto and the 1 hour delay in her flight might pretty much have prevented her from making it — I hope she did), and customs was almost a joke — they didn’t even look at us, really. Just passed right through...

After that, we found the desk to ask for our Super Shuttle connection, and then ventured out into the -10 degree weather. It had been in the mid-20s when we boarded our flight. A thirty degree temperature swing might affect most people badly, but I actually enjoyed it. Everyone back in Calgary and Toronto has been complaining about bitter cold (okay, even -37 is a bit much for me) and blizzards. I miss that. I’m Canadian, man, and December means snow and ice to me. Looking out my windows and see palm trees just weirds me out.

My breath was clearly visible. Alex started sniffling, and poor Mi Pequeña Niña was shivering within minutes. We were quickly donning extra layers. Our very indignant driver showed up about 15 minutes later, and tried to brush us off (the prick) before we were finally let on. Then off for our 30-minute drive into Manhattan. We were the second group to be let off.

This morning, we woke up a bit chilly. Our room isn’t particularly warm, sadly, and while we had a thick blanket, MPN didn’t and her hands were ice cubes. (Things we’re changing tonight.) Showered and dressed, we all headed down for breakfast. The first thing I said to the hostess (who looked strikingly like Emmanuelle Beart) was "hola". Habits are hard to break.

Bacon. Real bacon. Ye gods, I had forgotten what real bacon tastes like. The eggs were fake (I already miss Costa Rican eggs), but the juice was real. The fruit nowhere as fresh as I’m used to. None of us paused, and inhaled heavily.

Our excursion today was down to Times Square, the chief need being to hit the Toys ‘R Us. Our trip took us to a little set of stalls set up in front of St. Bart’s a block from our hotel, where we happily splurged on new hats and mittens for Alex and I (as we didn’t have any), before continuing westward to St. Patrick’s Cathedral. There we turned south on 5th Avenue, passing by Rockefeller Center, winding our way down to 47th St, where we crossed westward again. We did this a couple of more times before entering Times Square along 43rd St. (we should have some in at 44th, but my memory was a little vague — I wasn’t that far off!). We turned the block north to the Toys ‘R Us.

If MPN were a little bit older, she’d probably have freaked out when we entered. As it stands, we entered into an area that was replete with Hello Kitty NYC paraphenalia, and she couldn’t stop her little half-waddle between all the various things she could get her hands on. It was horribly cute, and I felt kind of bad that she didn’t have more stuff to play with.

We were at Toys ‘R Us for well over hour two hours. We left just after 12:00, which was about the time I’d finally had it with all the pushy morons, people fully devoid of Christmas cheer, and just plain assholes. I have a whole new level of respect for people who work retail during the Christmas season, because there are a lot of real winners out there this time of year. This is also where I make a comparison to Costa Ricans — they are among the nicest people in the world. Even in confined places, Ticos are just plain awesome people. 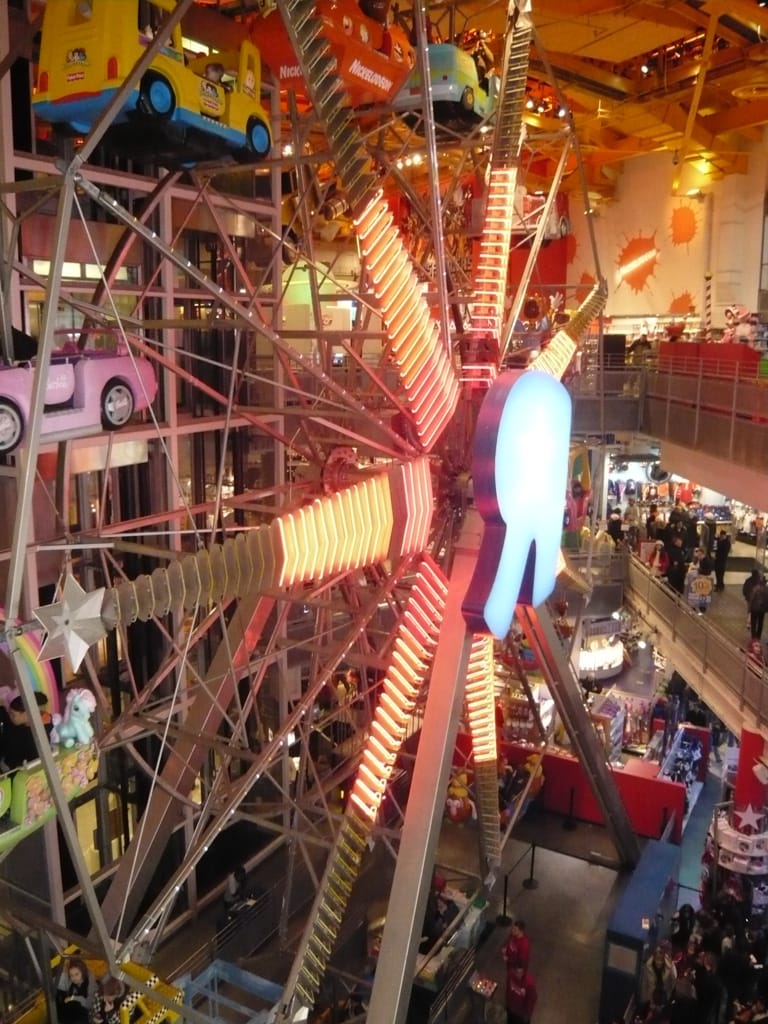 Back out into the not-quite-as-cold cold, we started our slow journey back towards the hotel. We hit a small gift store barely two blocks away. MPN was already sound asleep. (She’s sleeping again now, which is why I’m able to type this out during the day.) A little further away, we found a street artist who hand-paints name signs. Alex chose a pattern made of dragons. The poor woman’s fingers were beyond numbed. I was about to offer her my gloves (hey, they only cost $5) when I realised that she wore the gloves she had for a reason — they have the ends cut off so she can paint. Barely 10 minutes later, we had a new name painting for MPN, and we continued our way back.

We had lunch at the Metro Café, a small (modern) deli next to the hotel. The single biggest thing for me? Chicken noodel soup. I can’t tell you the last time I tasted anything this good. Seriously! I think it’s because I’ve eaten Tico for the last six months, and seriously forgotten many of the things I grew up on. Not that I’m complaining! I just find these things interesting.

Well, as I said, MPN is napping, and I’m on guard duty. Alex is off drooling over books in her first all-English bookstore in six months. I imagine I won’t see her for at least another hour. I hope she finds what she wants.