Yes, you read that right. I drank coffee. Not a coffee-flavoured beverage, not something with Kahlua. Coffee. Real. Honest. Caffeinated.

Those of you who know me are probably all thinking the same thing: Uh oh.

I offer you the following piece of encouragement: Don’t panic. I’m not an addict. Yet.

So why now? Well, it was partly a snap decision, though there was a wee bit of premeditation to it. Mark had suggested that we take a trip out to the Orosi Valley, a region about 30 kilometres east of San Jose. The valley is one of the major coffee-producing areas of Costa Rica, which is evident mere moments after entering the area — you can’t miss the rows of coffee plants.

I opted to make this a "surprise" journey, and didn’t really tell Alex where we were going. As usual, this led to an endless string of placenames as Alex tried (unsuccessfully) to guess. This time, I figured I had her, since the route was convoluted enough that should wouldn’t be able to easily stumble across it. (On our previous journey, she knew we were going to Arenal within minutes of us leaving National Route 1.)

Thanks to Hermes, we now had a faster way of getting around San Jose (the route we had known goes through San Jose, and takes well over an hour), which deposited us on the other site quite quickly. From there, the trip out was fairly uneventful, taking us past Tres Ríos (the furthest east we had been to that point), over a fairly steep rise in the valley, then down into Cartago.

Cartago is a place of pilgrimage for many Costa Ricans, notably for the Nuestra Señora de los Angeles Basilica. It’s the home of the Virgin of the Angels, the patron (saint?) of Costa Rica. But that’s not what we were going out to see (at least, not this time). Although we did drive past the basilica, we only had the time to glance. We were still bound for our destination.

(I should point out that "time" was a consideration. The Premier of China is in Costa Rica, and his arrival was wreaking havoc with traffic as they shut down highways to ease his travels. This meant we had to plan our travels carefully so we wouldn’t be caught in anything.)

We continued to Paraiso, where I instructed Alex to look for a road sign to "Orosi". Another diversion, since we weren’t actually going to the town of Orosi. Instead, towards the edge of the south side of Paraiso, we hung a left and started a weavy, windy, and steep drive down into the Orosi Valley.

There are few places in the world I’ve been that stand out as being truly gorgeous. This is the sort of place I’d kill to be on a bike for a (sunny) day, just me ... and my camera equipment, of course. High walls seem to surround the valley floor, which is largely taken up with a lake formed by the damming of the El RÃ­o Grande (used for hydroelectric power). The end of the lake near the dam is filled with floating vegetation, which offers a very picturesque view of the area.

Shortly after 11:30, we arrived at La Casona del Cafetal, a restaurant hidden 500 metres from the road in the middle of a coffee plantation. We’d come for the buffet (this was the root of the surprise), which is filled with traditional Costa Rican foods. Although some of the staff do speak English (far better than I can speak Spanish), that’s about where the catering to gringos stops. After that, it’s all Tico. I think Alex, Mi Pequeña Niña, and I were the only gringos there.

Which, really, is fine with me.

La Casona is perched on a small rise overlooking the lake. Although the day was cloudy, the view was still fantastic. I’m sure on a sunny day, the view can’t be beat. It was definitely a great place to go for brunch.

All morning, Alex and I had thought MPN was sick. She was sneezing a lot, her nose was running, and she had teary eyes. (We would later check with Nana — my mom — to get confirmation that it was just teething. Oddly enough, my little girl has yet to have a cold.) None of the ooziness seemed to diminish her appetite as she tore into almost everything put in front of her. (She avoided the carrots.)

Being in the middle of a coffee plantation, I figured this place had to have good coffee. I kept asking Alex if she wanted one. At first she didn’t, but after getting some food, she changed her mind. And when she said "sÃ­ ­", I added "dos". You could have knocked Alex over with a feather.

It reminded me of when I first started to drink alcohol. Yep, time for a flashback...

New Year’s Eve, 1995. It would be my last New Year’s in Ottawa — I got the flu the following year, and the year after that I was preparing to move from Toronto to Vancouver. But in 1995, a small platoon of us had traveled up to Ottawa, and were arranged around a massive circular table at the Yangtze chinese restaurant along Somerset, about four blocks from Chris’ apartment.

There were around 20 of us (a bit of a guess, my memory is a little fuzzy for obvious reasons), all of whom knew each other quite well. And one thing they all knew about me: I didn’t drink. It wasn’t for any reason, that’s just the way it was. Everyone accepted it — razzed me about it, I should add — but never forced anything.

The waitress was taking orders, going around the table one person at a time, getting the list of people. When she got to Therese, Stuart, and Liz, the three of them decided to order a bottle of wine between them and asked if anyone else wanted some. For some reason — and likely no more reason than "just ‘cuz" — I decided that it might be nice to have some, too. Somehow, between all the commotion in the restaurant, the confusion of orders, and my not-quite-seen (or heard) motions, everyone missed that I’d put myself in with the order. Including the waitress, although she’d heard the "me, too".

When the waitress returned with the wine and four glasses, she could only figure out where the first three were supposed to go. She asked:

Who had the fourth glass of wine?

That would be me.

You could have heard a pin drop. The entire table was silent — the only time for the next many hours that these people would be silent — and stayed that way for couple of heartbeats. The moment was broken by Stuart, who chipped in:

Such was the experience when Alex heard me order a coffee. For a moment she thought that I was correcting her order, and almost got our waitress to change it. She caught herself about to speak, and then looked at me in sheer shock. Me, her husband of 3 1/4 years, whom had shunned all coffee for the entirety of his life, was about to have a first cup.

Drama, of course, ensued. The moment, for you doubters, was even captured on video.

Now there are a significant number of people whom I’ve met over the years who were (and in many cases, still are) abjectly terrified of the idea of me drinking coffee. Certainly, a third of my life ago, that would definitely be true. Drinking that much caffeine as a younger man might have well turned me into a Jekyll and Hyde sort of personality (if you doubt me, ask the people who knew me in university), and that prospect scared the bejeezus out of them.

One advantage of age: calm. Well, as calm as a guy like me can get. And frankly, calm enough that I wanted to try coffee. Living in Costa Rica, I feel like I’m being left out whenever I pass the coffee aisle (I jest not!) and savour the aroma. I love the smell of coffee, and the taste of coffee in things that I’ve eaten and drank. But coffee itself? I’d seen too many addicts of coffee to want to go that far...

Still, I had to know.

The coffee came not as a simple cup, but as a chorreador. This is the way you drink coffee Costa Rican-style. The waitress poured in the hot water, and we waited for the coffee to fill the brown mug underneath. When it was ready, I sniffed at the steam that wafted from the top, not unlike sampling the nose of a fine wine (Alex probably thinks it was a wasted effort — the coffee was actually too strong). 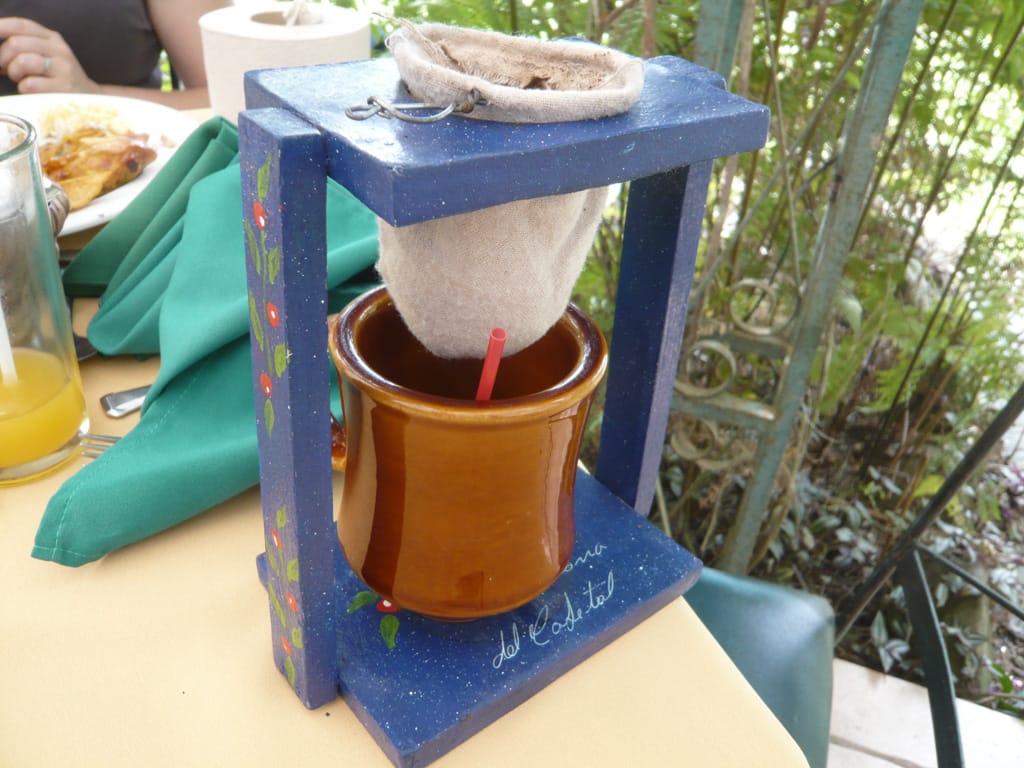 The first sip brought forth the taste of ... well, coffee beans. I know, I know, that sounds like a really stupid thing to say, but the reality is that this was not exactly what I’d expected. Having only ever tasted coffee blended with other things, the taste of the other things masked some of the coffee flavour. So it wasn’t quite what I was expecting. 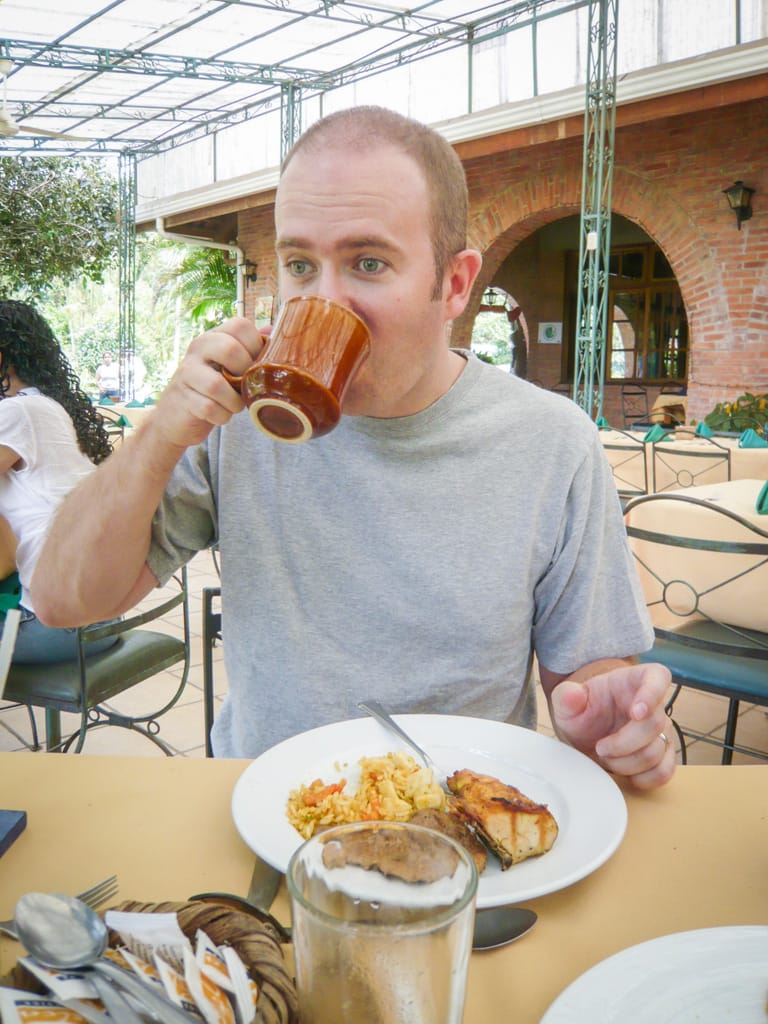 But it was far from bad.

And yes, I liked it.

In fact, as I continued to drink the cup, I couldn’t help but notice that things seem to look almost a little different. Colours seemed to be more saturated. Details became a little sharper. Everyone seemed to move just a little bit more slowly.

Alex just continued to make fun of this, mockingly worried that we were going to have to set up a full import business to keep up to my coffee habit. (I hadn’t even finished my first cup.) I drank it straight, black, no sugar. I figured I had to know what true coffee tastes like before I start adding other things to it.

Oddly enough, the drive home seemed to go a little more quickly than the drive in, even though I took a couple wrong turns (as I’ve mentioned before, not all the roads here are well-marked). And I had serious trouble sleeping.

Not that I think it’s at all related.