When Alex and I first came to Costa Rica 3.5 years ago, we went on a little packaged tour. The tour included a two-night (possible three-night — Alex and I are struggling to remember which it was) stay in the Arenal area. Our first afternoon/night included a hike around the south side of the active Arenal volcano, and dinner and a splash at the Tabacon Hot Springs.

At the time we’d been there, it was highly magical. We’d seen lava (in the form of red-hot tumbling rocks) rolling down the side of the mountain, the clouds of steam rolling through the trees illuminated by the carefully-placed lights. It was something to behold.

Ever since then, Alex had wanted to go back. Rack up Surprise Weekend in Costa Rica #3.

We left Saturday just after lunch, taking a route up through Naranjo, Cuidad de Quesada (also known as San Carlos), and then angling west through La Fortuna. This was not exactly an ideal route, since it’s a national highway — despite the insane amount of curves present in the road — which means a lot more (slow) truck traffic.

We arrived around 16:30 (it’s about a 3-3.5 hour drive, albeit a very nice drive) and checked in right away. A nice room (with air conditioning), two on-site Cafe Britt stores (one in the hotel, the other in the hot springs facility), and a couple of very nice restaurants.

Dinner was when we found out how expensive Tabacon can be. Although the room rate for the weekend wasn’t too bad (technically less than the one at Ylang Ylang), it does not include any meals (whereas Ylang Ylang covered breakfast and dinner). A $75 buffet bill said that we were in for a pricey weekend.

That’s the first myth of Tabacon — very nice hotel, but far too-expensive food for the quality that you get. The second myth is that the hot springs open at 8:00 in the morning. Which is true — they do, but you’ll find the water levels in the river are practically non-existent, as the water is diverted to fill the swimming pools, which starts around 9:00. So you can’t really use the hot springs until at least 10:00.

On Sunday, we went out for an excursion to find a butterfly farm (Alex had promised Mi Pequeña Niña that we’d go see butterflies). We had to drive to the south side of Lake Arenal to the Butterfly Conservatory, which took us on a very picturesque journey around the volcano. Which — apparently a sign of good luck — was mostly free of clouds for once. Many photos were taken. 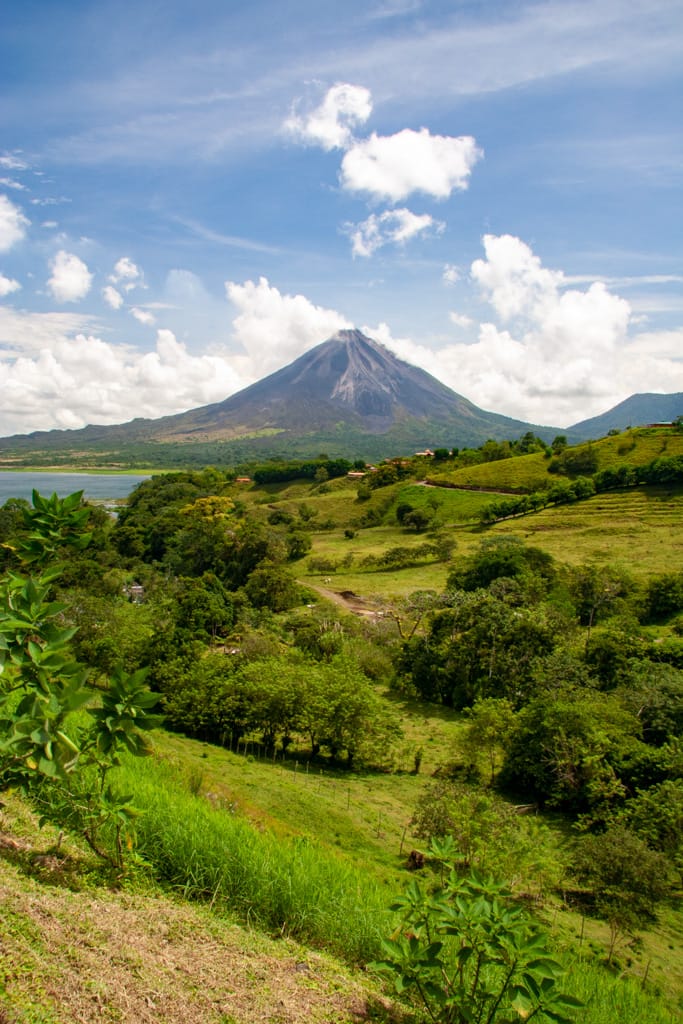 The Butterfly Conservatory is near the end of a very rough road, off of a bumpy and rocky gravel road, off of another dirt road. (Driving back onto pavement after all that was a joy.) It sits atop a hill that provides — without question — one of the finest views of the Arenal volcano. This would be an exceptional place to take pictures at night during an eruption, if it weren’t for the fact that driving there in the dark is a Really Bad Ideaâ„¢.

The tents that contain the butterflies are down in a valley (a former cattle ranch turned into a reforestation project, after it was realised that putting cattle on volcanic soil is also a Really Bad Ideaâ„¢), which pretty much eliminated all breeze, and turned it into a bit of a boiler. Everyone was sweating profusely. But the butterflies were in significantly larger numbers than at Spirogyra — and some species that we hadn’t seen before. 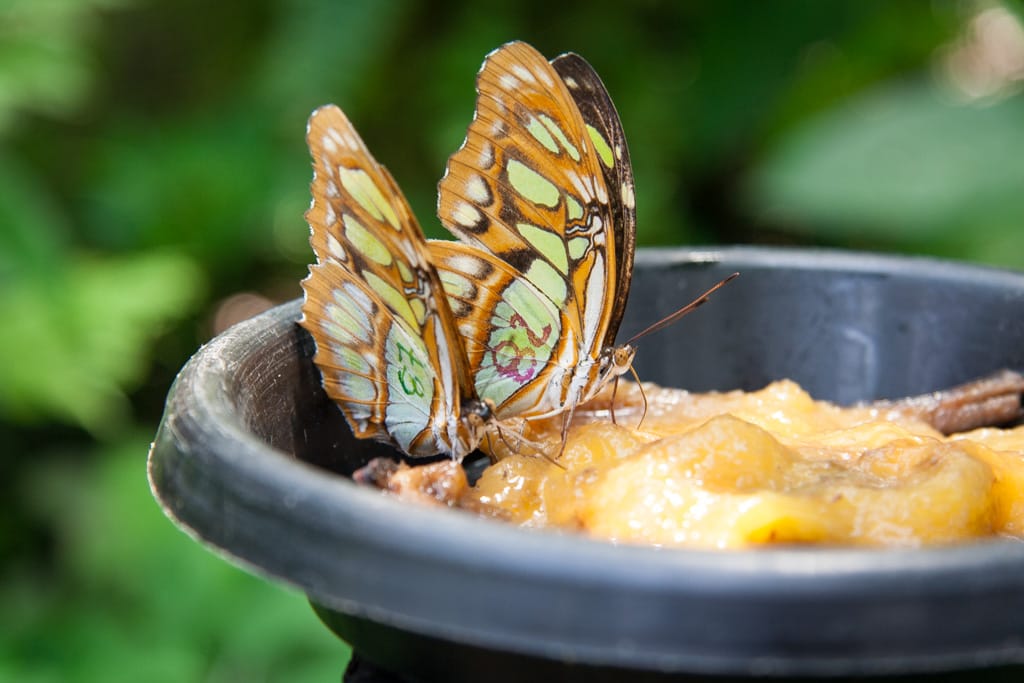 Luckily, we’d gained a tour guide part-way through the second (of four) butterfly tent, who not only showed us the butterflies and their names (given her limited English and our even more-limited Spanish), but also played with Mi Pequeña Niña while Alex and I snapped pictures). Sadly, I never did get her name, so all I can say is "Thanks, whomever you are!"

Butterfly Conservatory also has a little frog habitat with some of the native Costa Rican frogs. Our guide was kind enough to bring the non-poisonous ones to the front of their enclosures so we could see them more closely. Otherwise, it would have been a bit hard to see them at all. 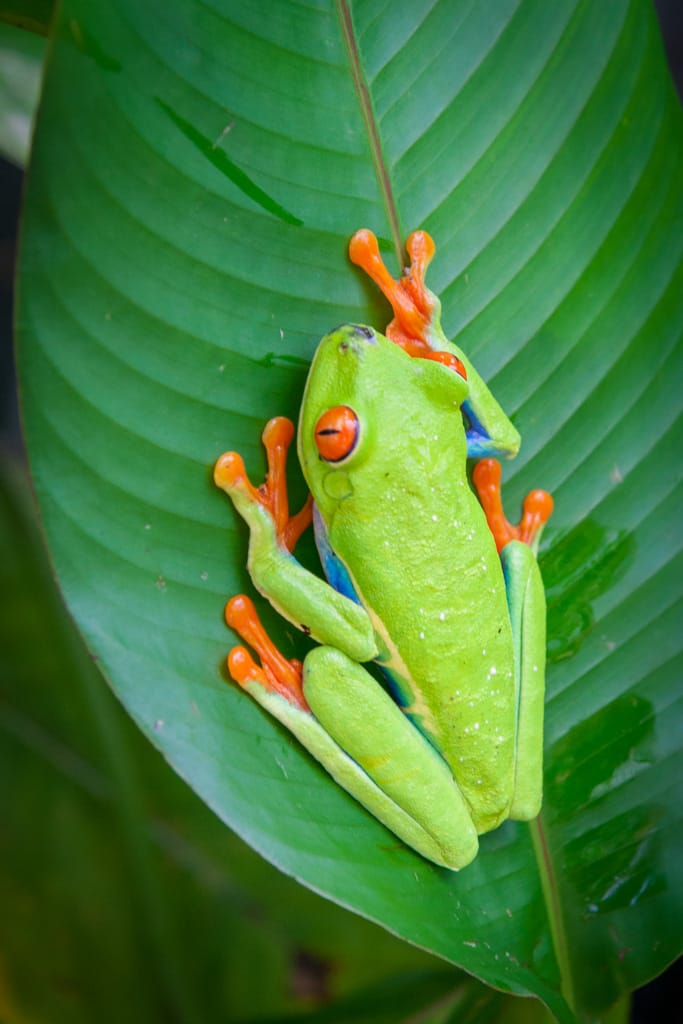 Naturally, Alex and I visited the hot springs whenever we could — what else would be the point of staying at Tabacon if we didn’t? Alex also took advantage of the five-star spa there, and hasn’t stopped talking about it yet. (I have to admit, it does sound wonderful.)

Even MPN got a chance to try the hot waters, while Alex was at her massage. Yes, I took my daughter into 39 degree Celsius water. And she loved it. I tried her in the cooler pools first, just to make sure, but when I slowly put her into the hot pool, it must’ve felt like heaven for her — she splashed around like a seal. The bridge overlooking the pool was soon filled with spectators. We might as well have been the featured attraction at Sea World.

This is normal, by the way — it’s rather absurd the amount of attention MPN attracts down here.

Monday being a holiday in Costa Rica (Independence Day), we took a leisurely return Monday afternoon, going through San Francisco and San Ramón instead of San Carlos and Naranjo. This is the route that we had travelled (in the other direction) 3.5 years ago with Interbus on our way to Arenal. But Alex and I didn’t remember a thing, something we feel pretty guilty about. Alex claims that it was culture shock at the time. I think I can live with that.

We stopped only twice — once to feed MPN (and have a Coke), and another at a gift shop we’d stopped at with Interbus 3.5 years ago. The only other place in the area that we knew of. It was weird because we didn’t really recognise it, but we did remember it. 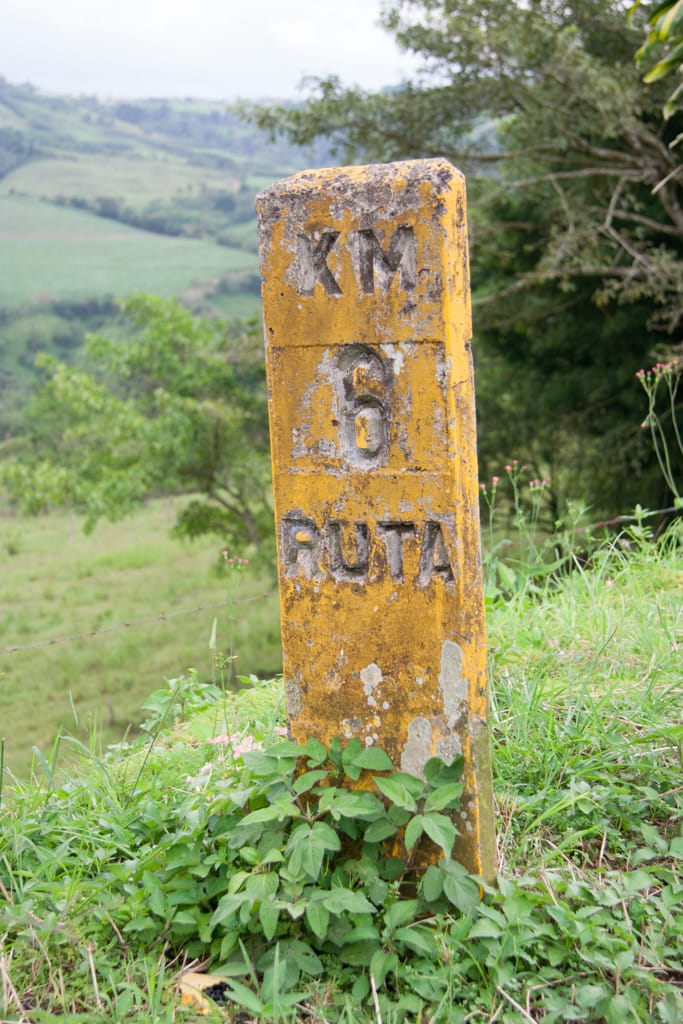 Sadly, this weekend cost a lot more than I’d budgeted for, so we’re not likely to do anymore long-distance trips for a while. (Besides which, we’re out of long weekends until Christmas). Of course, there’s still stuff around us for day trips, so stay tuned for more adventure!